It’s not unusual for the development of a mobile game to take a long time. I mean, there are lots of indies that are just one or two person operations who are trying to make games in whatever spare time they have outside of regular day jobs and families. Plenty of times we’ve been excited for something that just seems to never come along. I was pretty sure that was the fate of Mixed Bag’s forma.8. It was first announced in June of 2012, and it seemed like every year at E3 or GDC or other gaming conferences we’d see an in-progress build that looked great, and were always promised that the release was right around the corner. Well, 5 years is a long time, but somehow Mixed Bag came through on their promise and this week they released the mobile version of the game which they call forma.8 GO ($4.99). 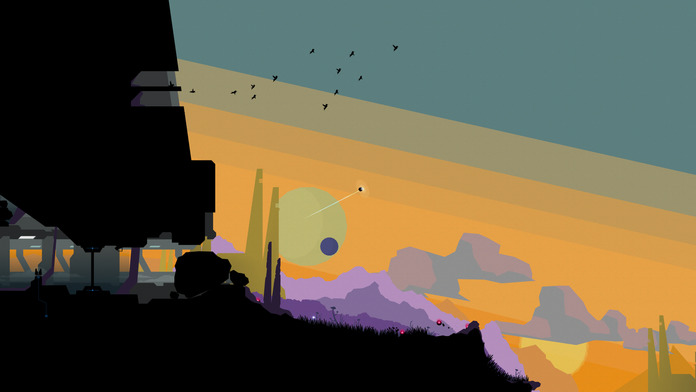 Aaaaand… it was totally worth the wait! Just in case you haven’t been following forma.8 for the last 5 years like we have, it’s a Metroidvania style game which means the entire thing takes place in one humongous, interconnected map and as you play you’ll unlock new items and abilities which will open up new pathways until eventually you’ve unlocked the entire thing. You play as a tiny exploration probe and unlike most Metroidvanias which are platformer-based, in this one you actually fly around meaning you can go in all directions.

This is a BIG game, and I’ve heard from some people who are several hours in and haven’t even registered the 25% completion mark yet, so if you’re looking for a lot of bang for your buck then forma.8 should deliver. And as great as the actual action and exploration parts are (and those boss fights!), what really sticks out to me about this game is its tremendous atmosphere. The stylized graphics are an homage to the classic adventure Out of This World (aka Another World) and I feel like they really did it justice here. Also, the music and sound effects add tremendously to the experience, so definitely don’t be scared to bust out some headphones and completely lose yourself in this one.

We see a lot of games lag for years in development hell, and more often than not it feels like those games just plain disappear and never end up coming out. I feared that would be the fate of forma.8, but Mixed Bag never gave up on the project and even managed to release it on a variety of platforms besides mobile. I think, though, it’s the sort of game that will be really be especially appreciated by mobile gamers looking for something meaty to sink their teeth into, and its controls are simple enough that it feels just fine on the touchscreen (but supports MFi controllers if you want). I’m happy that a game I’d been looking forward to for so long not just actually came out, but that it’s actually a fantastic game too, so don’t let forma.8 slip under your radar and check out the forum thread for tons of discussion of the game.