When I reviewed the original Framed ($3.99), I said “Given the brevity and lack of progression in the concept, this really does feel like half of a larger whole stretched out to fill one game." Holy crap was I right. Loveshack Entertainment decided to return to the concept with Framed 2 ($4.99) and the difference is night and day. I don’t know if I have ever played a game where the second title in the series made the first one look like utter garbage in comparison, but that’s exactly what Framed 2 does. It is exactly what the original game needed to feel like the genius title that the concept deserved. 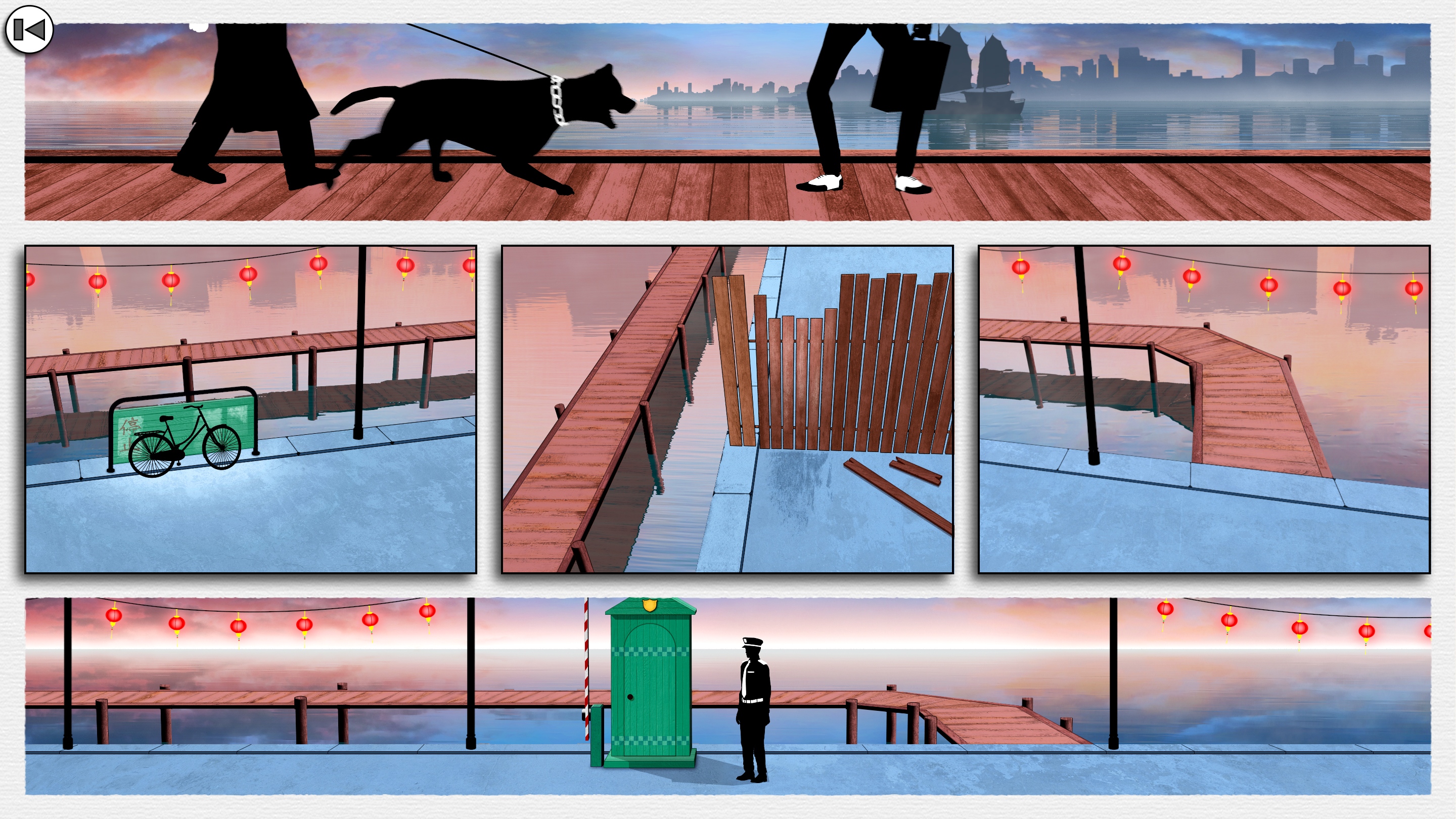 I recommend playing Framed 1 still to a certain degree, as it is in part the tutorial to Framed 2, which throws a few easy sequences your way, before going whole hog into its concept, challenging you early on rather than feeling like one giant tutorial. The story itself is a prequel, once again involving a silhouetted man, woman, and a mustachioed man pursuing them. The woman and mustache are the same characters who appear in the first game, with the big MacGuffin briefcase playing a role here. There’s still no dialogue in the experience at all, but the game feels like it has more character. The male protagonist in particular has just enough detail and personality to keep him as the abstract character he’s supposed to be, but to make him feel like a character. And taking the world from a generic western city to a vaguely-Chinese town gives the world more of the feeling of a dynamic, lively setting. It doesn’t feel flat, or generic, and there’s good ways that the locale gets used to inspire the theme. While some people might be disappointed that the game is a prequel, like how I saw some consternation after Beyond Good and Evil 2 was revealed to be one, I will say: it pays off well.

The core mechanic of the game is rearranging panels in order to create the proper sequence of events, with the location of characters and items in each panel playing a role contextually to what happened in previous panels. The annoying puzzles where the rules of comic sequencing were played with are gone. For example, there were puzzles in Framed 1 where you had to rotate long panels around to solve puzzles, creating puzzles where you weren’t completely sure of how the sequencing was going to work. Those are gone. What does play a bigger role are the fun puzzles where you have to re-use panels in order to complete a sequence. So, you have more instances of where you have to utilize the different contexts, while still finding a way to use all the panels at least once, in order to solve the puzzle and advance. These puzzles now have more in the way of permanent effects, so order plays a role, too. You also have to move pieces around several times, so just the depth of these puzzles and how you focus on your approach is taken to a new level. Some new elements get thrown into the mix, such as environmental elements outside of panels that you have to manipulate. Some new puzzles at critical moments in the narrative get thrown in, too. 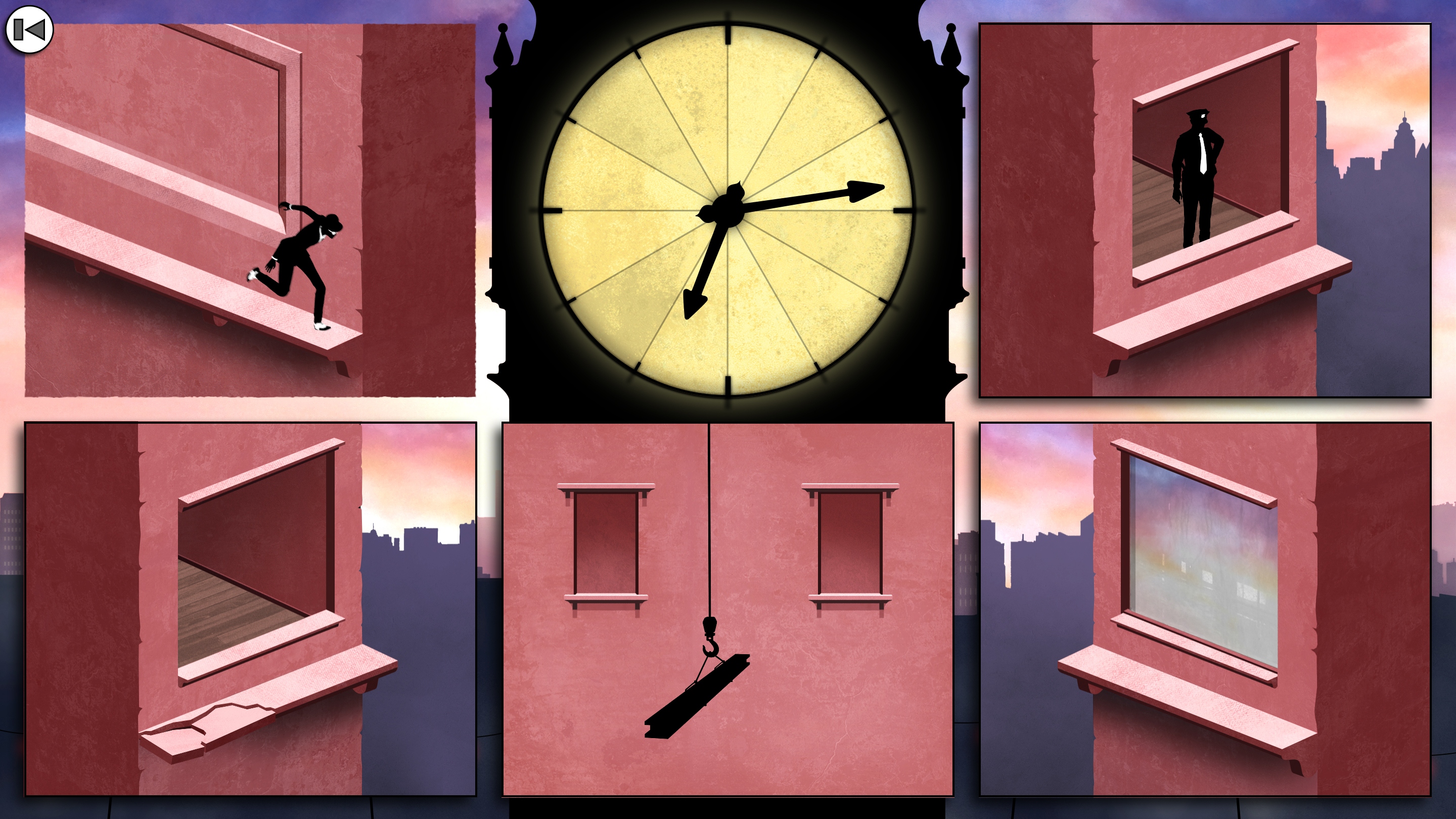 The photos you can collect serve two purposes in Framed 2. One is that they show how there’s some whimsy in the experience now. These Polaroid-style instant photos have cartoony representations of events in the game, and are part of how this game doesn’t take itself so seriously. There’s a few silly moments, and a couple of cool references to a famous fan of the original Framed, one of which is just a nice thrown-out reference, another playing a role in the game itself in a way that shows some of the cleverness at play in Framed 2. Additionally, these photos often require that you play through things in a slightly different way, perhaps taking an alternate sequence through the level. This is great! It shows that there might be more than one solution to challenges, and it encourages a bit of creativity in playing the game and replayability if you miss the photos. 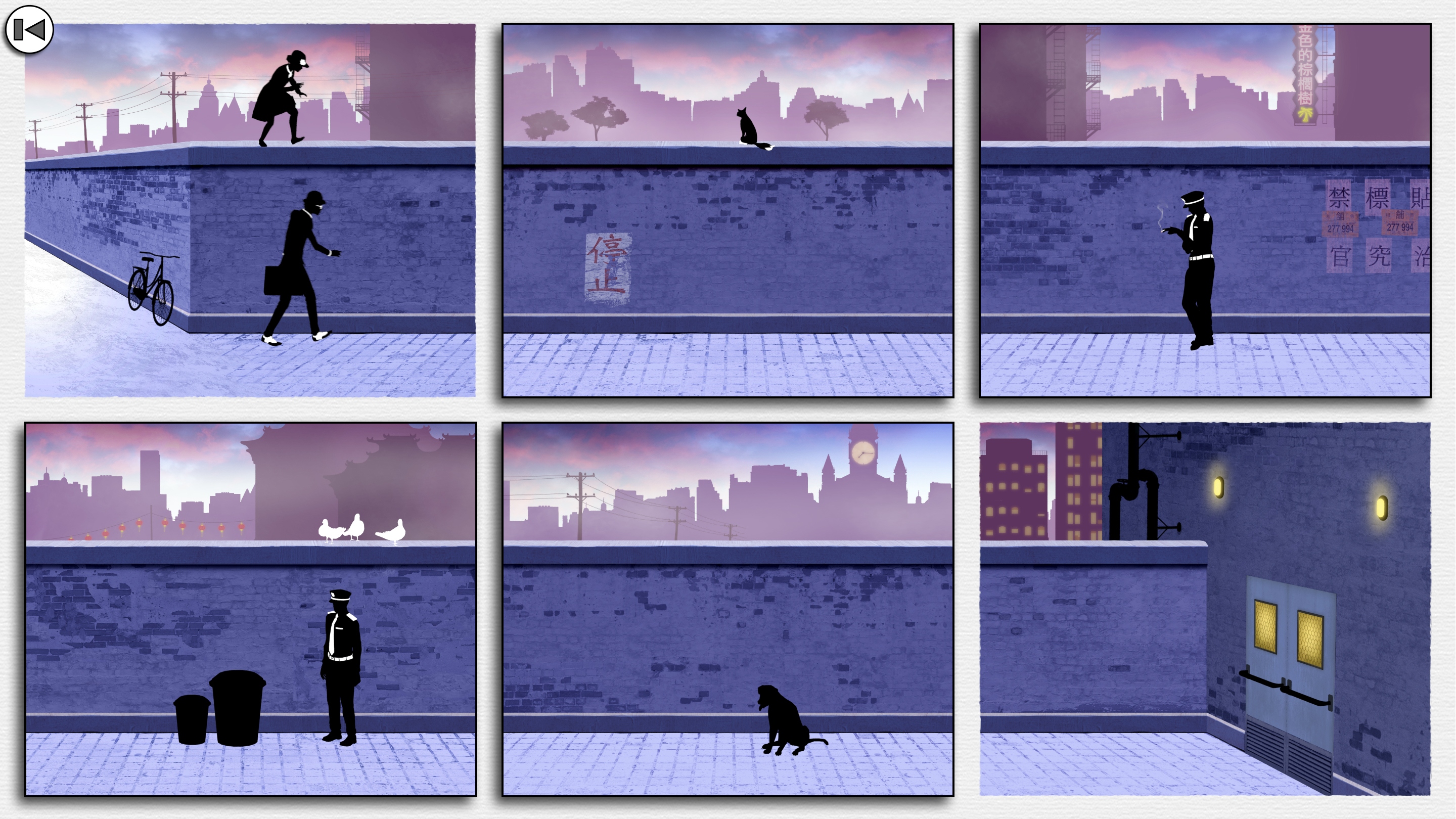 While the police officers in the Framed universe will never be considered smart, Framed 2 does a lot of subtle work to make sure that the hazard they represent doesn’t feel extremely unrealistic. Like, these cops still don’t have a tremendous ability to see anything outside of their immediate vision, but the original Framed took this to a ridiculous degree. The way you avoid and dodge cops in Framed 2 feels far, far less ridiculous. There’s still some oddities of the rules as to when your protagonist will whack the cop from behind or not, but nothing especially egregious.

I am seriously, seriously impressed by how much better Framed 2 is compared to the original game. You’re talking about a title that left me surpremely disappointed. I specifically said it felt like the first half of what should be a really good game. There were clever ideas, but they went underutilized. And a lot of ideas that didn’t work out took up too much prominence. And the twist in Framed 1 just didn’t land as well as I think Loveshack intended; even on a recent replay, it was still just confusing instead of clever. I stand by that game as a 3 out of 5 mobile experience. Framed 2 chucks almost everything that was bad about the original Framed out the window, emphasizing what is strong about the concept, and then building on it. This is exactly what a sequel should do. And for Framed, where you had a game with a good concept but a flawed execution, Loveshack put a ton of work in to make a sequel that annihilates what the first game did. It took a few years, but finally the promise of Framed has been fulfilled with Framed 2.