Developer Kenny Sun sure does like geometric shapes. His latest game is about pyramids, and just like his previous efforts, it’s both bizarre and brilliant. Yankai’s Peak ($3.99) might be titled like a sequel to last year’s Yankai’s Triangle ($2.99), but it’s something totally new mechanically. While that game saw you spinning triangles around, disassembling them, and reassembling them to try to make them fit together, Yankai’s Peak is more like a traditional Sokoban-style box-pusher. Instead of cooperative little squares, however, you’re pushing around pyramids that aren’t really good about moving in a straight line. The core mechanic is clever and rewarding, and the game sprinkles in new gimmicks regularly to keep you interested. 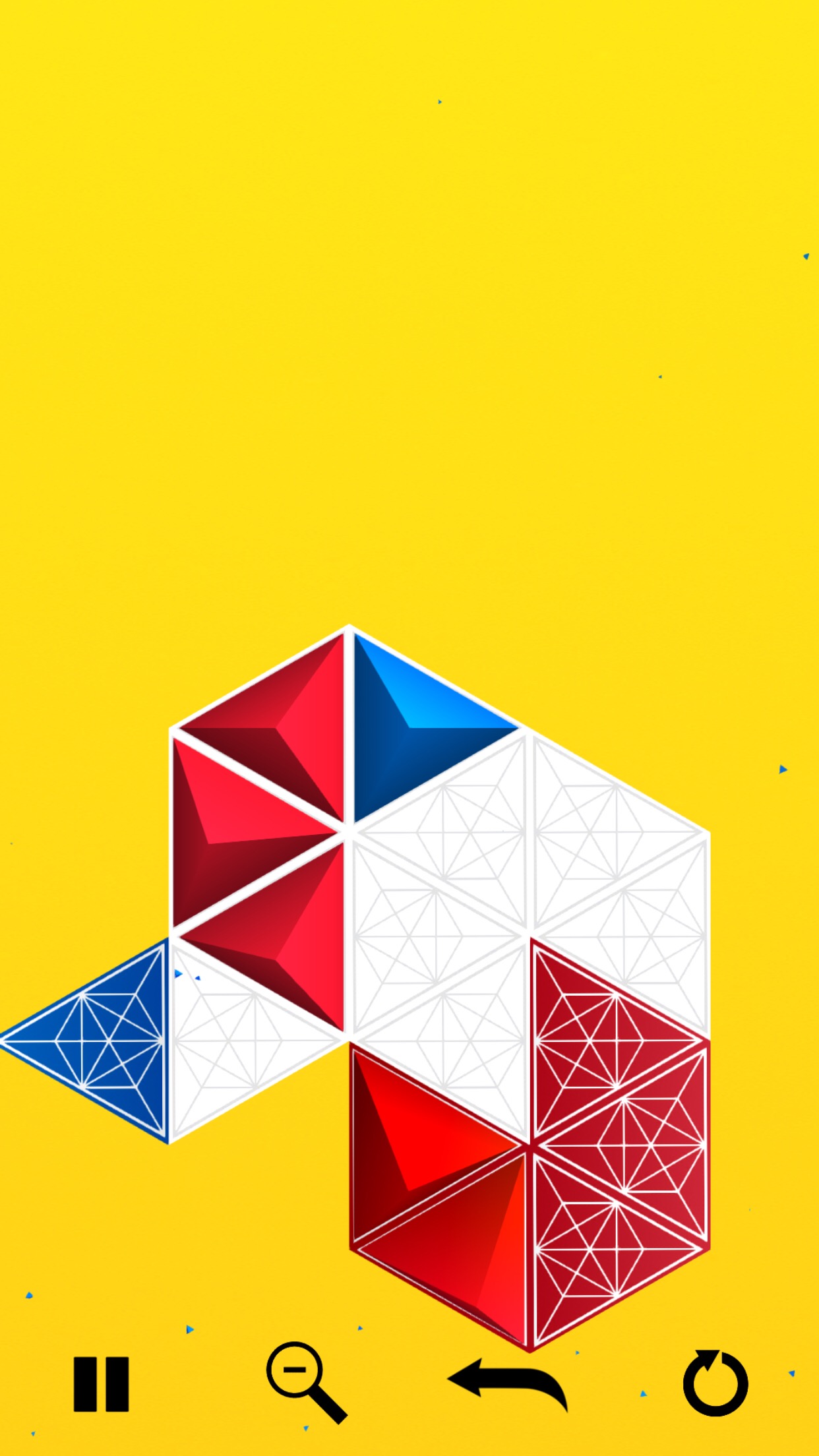 Yankai’s Peak offers up more than 130 levels broken up into discrete worlds. Some of the levels are mandatory, and you always need to complete a certain amount to move on to the next world. There’s enough wiggle room in that required amount to allow you to skip a few puzzles here and there if you get stuck, though you will want to return to them later. Just about every world introduces a new mechanic of some kind that you’ll have to contend with, offering a nice difficulty curve that keeps the game feeling fresh. Levels are selected from a sort of overworld area, with each one falling off the grid as you clear it. Moving your piece onto a level’s space in the overworld will bring up its title card and drop you into the mix. The title of the level might give you a useful hint, but you’re largely left to your own devices to solve things.

The basic moves are simple enough to understand. You control a blue pyramid. Swiping in any direction will move you to an adjacent triangle on the board. By tapping on any of the three points of your pyramid, you’ll place a pin. Swiping with a pin in place causes your pyramid to swivel around it, pushing any other pyramids that might be in its path. You can push other pyramids in a couple of different ways depending on if you contact them with a side or a corner. It’s a little hard to explain, but you’ll have the hang of it soon enough. Each stage has some colored triangles scattered across its floor. You’ll need to push an appropriately-colored pyramid onto each of those triangles to clear the level. Most stages are rather cramped for space, so it can be tricky to move one piece without accidentally jostling others in unexpected ways. 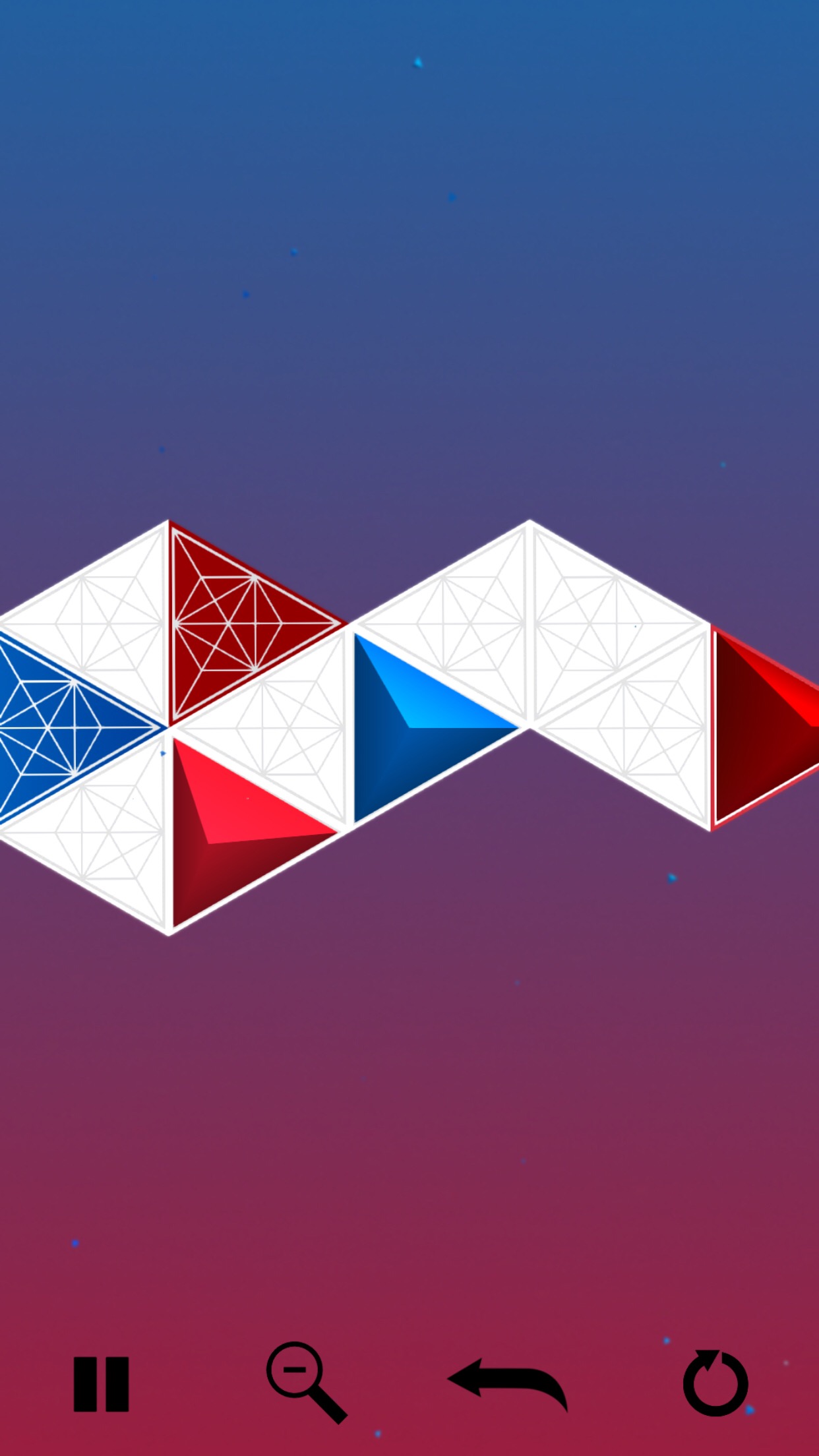 It’s all too easy to get yourself into an unwinnable state, but it’s equally easy to tap the undo button a few times to take your moves back. Yankai’s Peak is a pretty difficult game, but it’s a forgiving one all the same. There’s no harm in experimenting with moves since you can always take them back at no cost. Even restarting a level is quick and painless. That leaves the challenge solely in figuring out the puzzles themselves. Whether you do that by careful calculation, sheer luck, or cheating, it’s no matter to the game. In an era where puzzle games often charge real money to take back moves, it’s refreshing to see a game making things easier on the player where it counts.

The puzzles are the key to the game’s enjoyment. While they’re all over the board in terms of difficulty, they’re all quite clever and memorable in their own way. It’s remarkable that the game can keep finding new ways to surprise you with mechanics you thought you had already completely figured out. This, of course, is one of the appealing points of virtually all of the games from this developer. His games usually features a large number of levels, and many of those levels are less about being discrete challenges than they are about setting the player up for a real wallop. The more open-ended structure of Yankai’s Peak means that you’re less likely to run into game-stoppers, but you can’t avoid every level that might give you grief.

While the presentation in this game isn’t quiet as surreal as it is in Yankai’s Triangle, there’s certainly a similar sense of other-worldliness about everything. Things are slightly out of focus, and if you accidentally drop a block, an odd filter starts to set in. There are little flecks of something floating around in some levels, and the atmospheric soundtrack makes you feel like you’ve slipped into another dimension. The intro sequence has to be seen to be believed. If you thought Yankai’s Triangle‘s odd quirk of introducing every single level with its developer’s name attached was something, just wait until you meet the rest of the Sun family.

The feeling is once again like that of a puzzle toy along the lines of a Rubik’s Cube. There’s little pressure involved here, with no timers, an endless supply of undos, and not one piece of IAP to be found. You will probably run into levels that completely stump you when you first approach them. You might even get frustrated enough to put the game down for a while. The next time you pick it up, you may have a break-through. Even if you don’t, you can always try another level. Until you run out of those, anyway. Yankai’s Peak is a quality puzzle game that feels alien and familiar all at once, and it’s well-worth fidgeting around with until you make it to the end.