Hello, gentle readers, and welcome to the Classic Reload, the monthly feature where can’t seem to get ourselves out of the bunker. Each month, we take a look at a game from the App Store’s past to see how it holds up in the here and now. It’s a chance to revisit old favorites, reflect on their place in the iOS library, or simply to take a deeper dive than our reviews typically allow for. As the driver of this doomed golf cart, I try to choose a good selection of games from month to month. That said, if there’s something you want to see, don’t be shy! You can leave suggestions below in the comments. I can’t promise it will appear soon, but it will be added to the master list for future consideration. 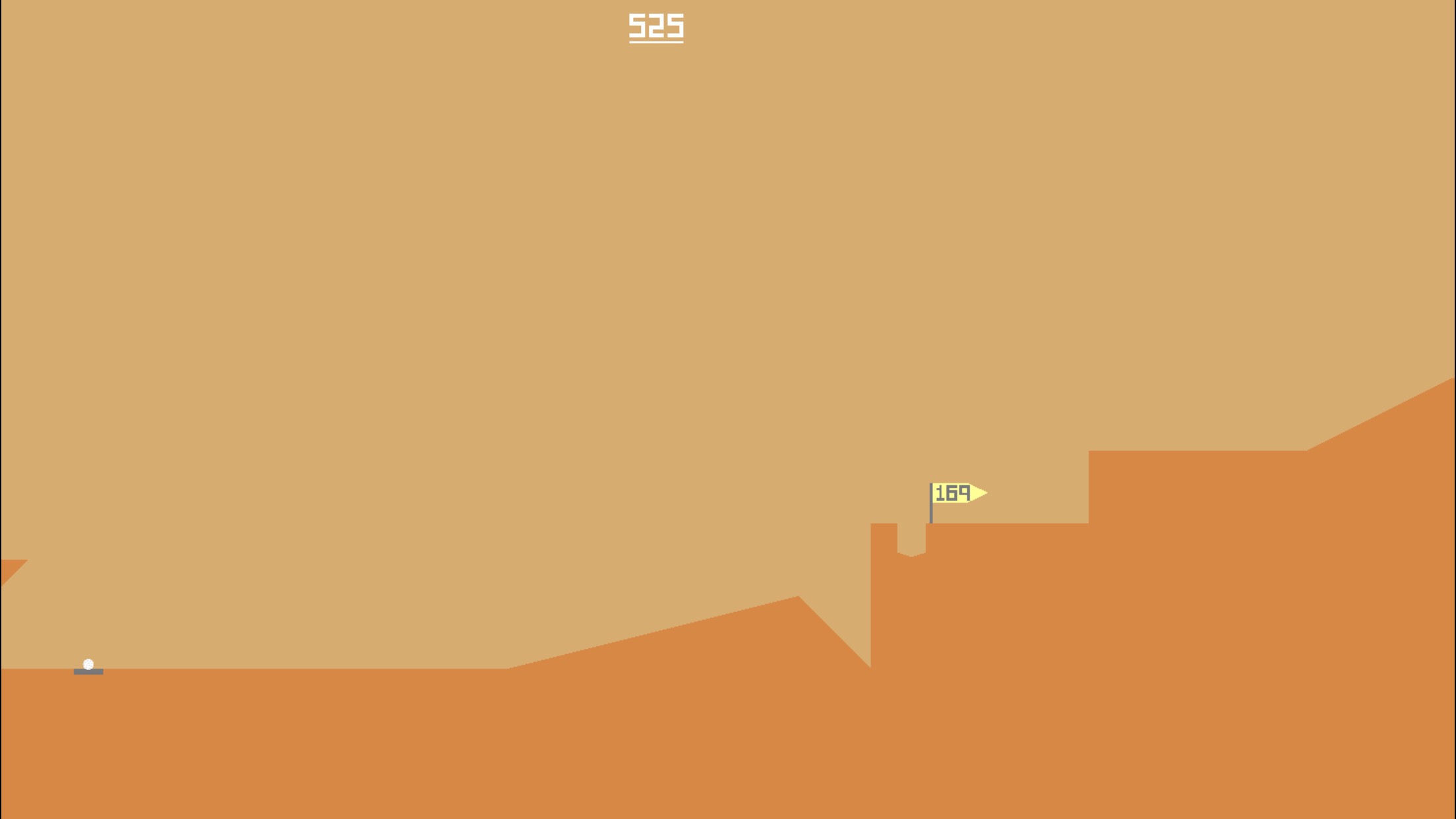 Whether you call them Blinkbat Games, Captain Games, or just go with Justin Smith, the developer of Desert Golfing ($1.99) is pretty obviously not the type to follow well-trodden paths. Their list of titles includes such classics as Enviro-Bear 2010, Cribbage with Grandpas, and No Brakes Valet among others. Even the games that sound like they might be normal, like Realistic Summer Sports Simulator, are pretty wild. There’s a term for games like these here in Japan: baka-ge, or “stupid games". It’s not meant to be a judgement on their quality, rather that they tend to be pretty silly or absurd affairs. And certainly, the premise of Desert Golfing seems to slot right into this category. You’re golfing a seemingly infinite number of holes through an unchanging desert. If you play long enough, just about everything in the preceding sentence turns out to be false, but it’s going to be true enough for most.

Something weird happened with Desert Golfing, though. It went right past absurd and somehow ended up in the realm of zen. While the developer says he was aiming at something with existential vibes, a great number of people found peace in the game’s simple mechanics. The game became extraordinarily popular and is easily Smith’s most well-known effort since going indie. In an interview with Gamasutra, Smith revealed the two ideas that came together to form Desert Golfing. First, he wanted to play golf on top of screenshots of thatgamecompany’s Journey. He also wanted to make something that contained the joy of an Angry Birds-like slingshot mechanic in more simplistic trappings. The game took just two weeks of work, apparently, so I guess that ended up paying off rather well for him. 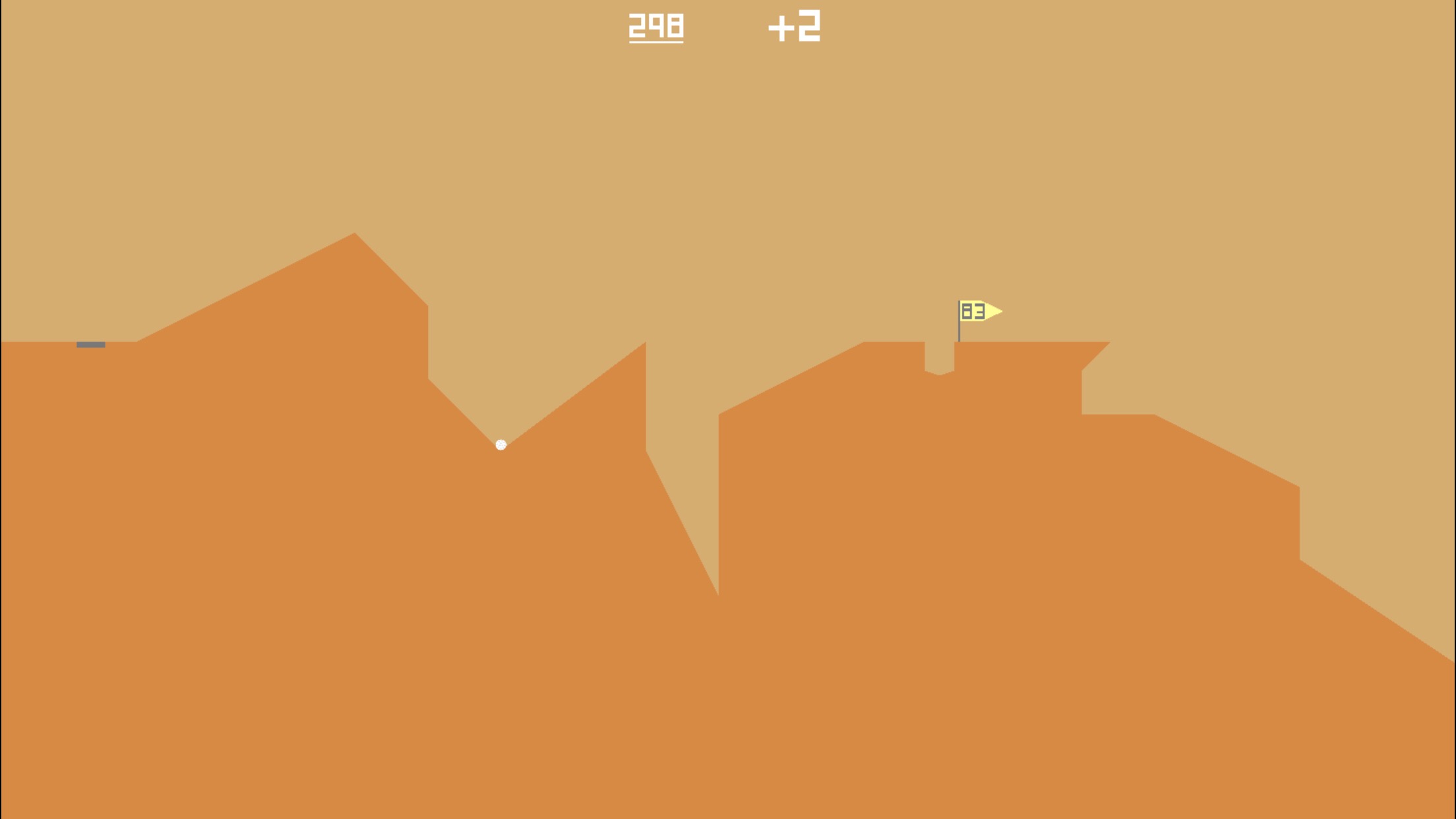 Desert Golfing performed the rare feat of breaking out of the mobile gaming side of things and spilling over into the industry at large. Not only were there think-pieces written about it, but some of those think-pieces had think-pieces written about them. If I can get a little think-piecey myself for a moment, I’d like to note that human beings naturally tend to look for the meaning or intent behind things. It’s how we make sense of a world that is entirely too random at times. Not everything will satisfy that desire, however, and it’s often the case that the more meaningless and random something is, the more humans will tie themselves in knots trying to find sense in it. Does Desert Golfing intentionally carry a deeper subtext? Is it just a silly little game? Is it trying to get people to over-think it as some sort of meta-troll? I honestly have no idea, and I wonder if even its creator does. I suppose the important thing is that the game has entertained a lot of people. Anything past that is just gravy.

I suppose I’d best describe the actual game mechanics. So, you’re golfing in a desert. There are 64,465 holes, all procedurally generated. Every player is on the same seed, though, so your level 1,035 will be the same as mine. Each hole occupies a single screen that is played from a side-view. Sliding your finger on the screen will display an arrow that tells you the direction and relative power of the shot you’re about to take. Just release your finger and you’ll let fly. If the ball goes off the edge of the screen, it’ll be sent back to its starting position, costing you a stroke. Sink the ball and the screen simply ratchet-scrolls to the next hole. There are no Mulligans here. The only way to reset your score is to delete the app itself. You have to accept whatever score you got and hope to do better in the future to flatten out your average. Not that it really matters. 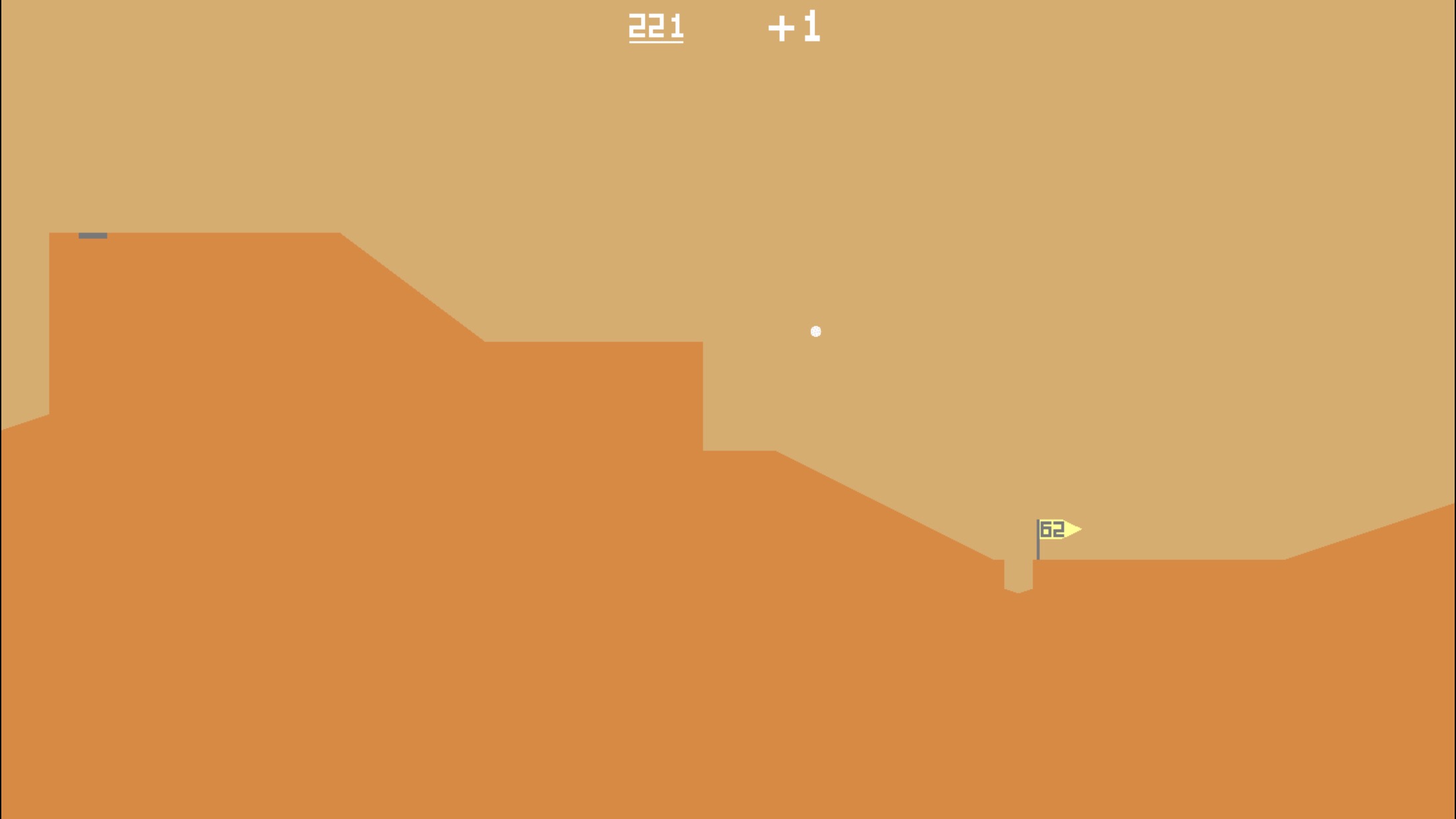 Each screen presents a slightly different layout. The first thousand or so holes won’t offer you much more than sandy hills, peaks, and bluffs. After you get really far into things, you might see the occasional cactus or rock. The color palette will change every thousand or so holes, as well. Oh, and there’s water. Sometimes. It’s not so rare as cacti are, but it’s used quite sparingly. That’s basically all there is to it. Do a big shot, putt once or twice, and it’s on to the next hole. If you get a couple thousand holes deep, things get a lot trickier, but one would hope you would be prepared for a step up in difficulty by then.

It’s all utterly pointless, but it works quite well as something to play when you only have a little time. There’s no menu and virtually no boot-up time at all. Start the game and you’ll be right at the hole where you left it. Have to go somewhere? No problem. Close the app worry-free. It won’t lose your place, or your score, even if you want it to. There’s no over-arching story to deal with, and even if you went months between plays, it’s always clear what you need to do. Get the ball to the hole in as few shots as possible. That never changes. There’s something appealing about golf on a primal level, I think. Dropping the ball into the cup is always satisfying, and I don’t think I’ve played a golf game yet that didn’t give that same feeling. Desert Golfing‘s reliable physics make it better than a lot of similar games, though. Just the fact that you’re playing the whole time on sand changes things up a fair bit. You can actually putt the ball up a hill and count on traction to stop it. 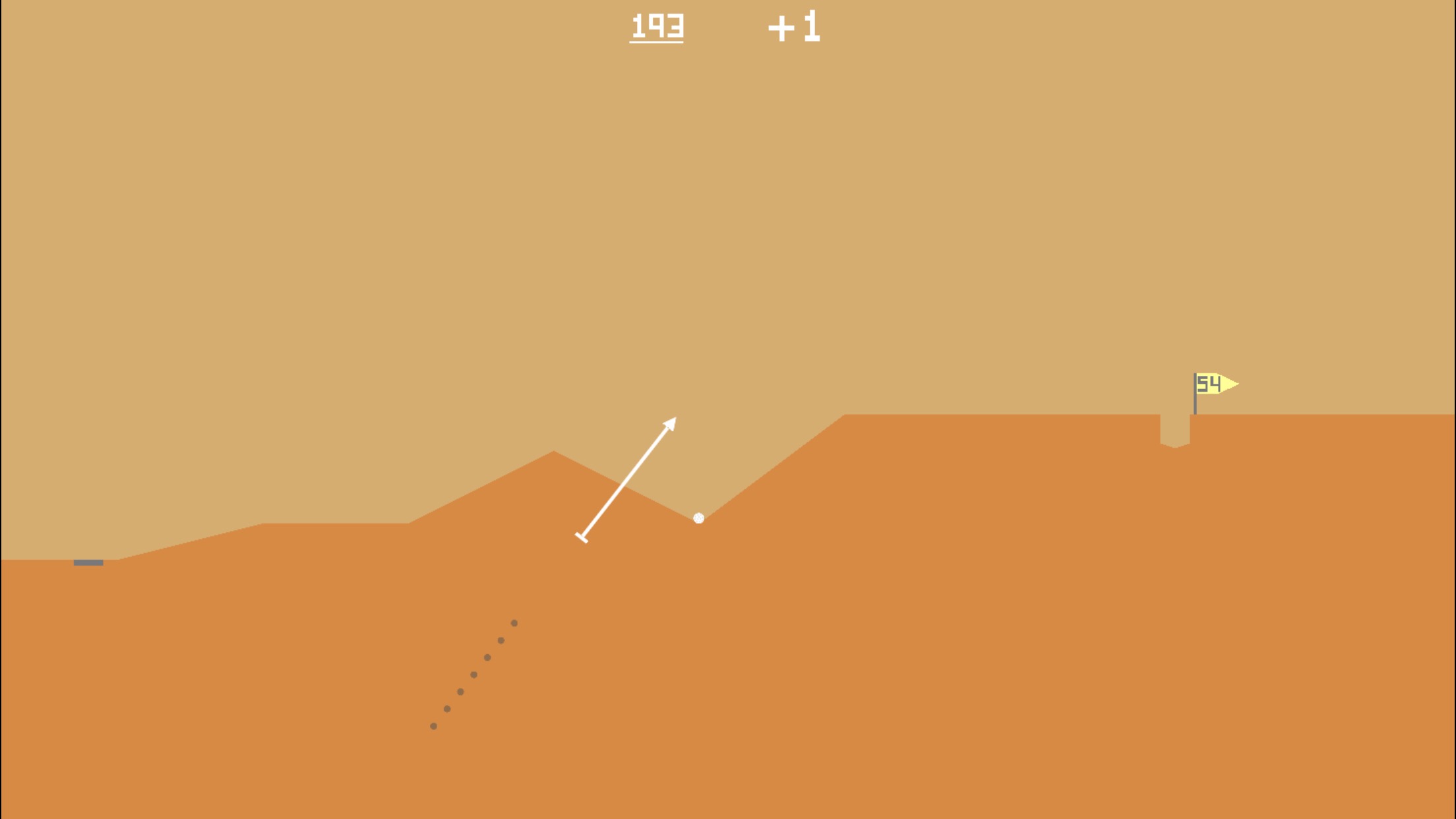 Anyway, the fact that the game is so long and never forgets your progress means that you’re unlikely to ever need to replay it. The title of this article is a sham, to tell the truth. I didn’t replay Desert Golfing. I resumed it. I doubt I’ll ever finish it. That’s fine, though. You’re just chasing a ball around in a giant sandbox. To assign any meaning or greater goal to it is folly. Perhaps more than most modern games, this one really isn’t about getting anywhere in particular. Rather, you just enjoy each hole as it comes, knowing that there’s nothing you can do about the ones you screwed up in the past, but that there will always be another hole ahead of you to try better on. Until there aren’t anymore, anyway, but you probably won’t think about that much until it gets really close. Oh, now I see how the think-pieces happened. Neat.

Desert Golfing is somehow 64-bit compatible, so it should survive the upcoming shift just fine. Smith has been good about fixing the game on the few occasions where it has had trouble, so I see no need to worry about that in the foreseeable future. That’s a good thing, because although there are a few dedicated players who are somewhat near the end, I suspect the rest of us will need at least another ten years or so to even get close. Will we keep trying? That’s the better question. I’ll probably keep going until I get to a hole that really annoys me. Then I’ll say that I’m going to stop, and I might even press down on the screen so that it wiggles with the little X in the corner. But I’ll probably just leave it be and come back again later. Such is Desert Golfing. 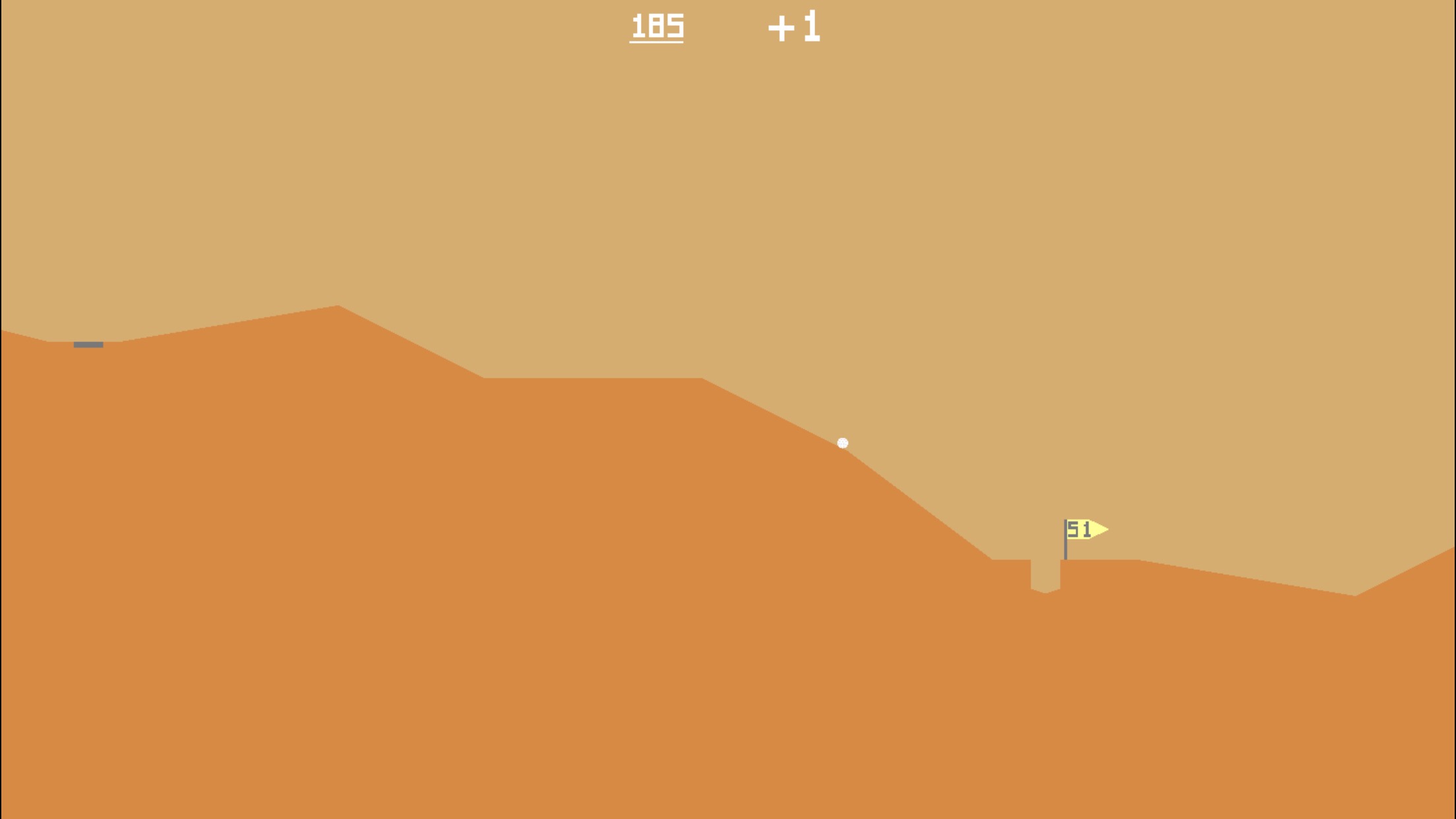 That’s just my take on Desert Golfing, though. What do you all think? You can leave your stories, thoughts, and comments down below. The RPG Reload Play-Along of Final Fantasy 5 is alive and kicking in the forums, as well. Don’t forget to stop by and join in! This will be a two-month Play-Along to ensure everyone has ample time to finish. As for me, I’ll be back next week with another RPG Reload Glossary article. Thanks for reading!

Next Week’s Reload: It’s time for another Glossary!