Trusty JRPG publisher Kemco’s been trying to spread its wings a little bit of late, trying out new developers and gameplay variations after years of serving up the same old. They haven’t quite given up on the old formula yet, though. Developer EXE-Create is still by Kemco’s side, cranking out their serviceable brand of JRPG joy every couple of months or so. Onigo Hunter ($4.99) is the latest offering, and it’s more or less the usual fare for Kemco. It tries to do a few new things but was obviously constrained by the resources available, making for an experience that is likely to be a little too familiar to mobile RPG fans. 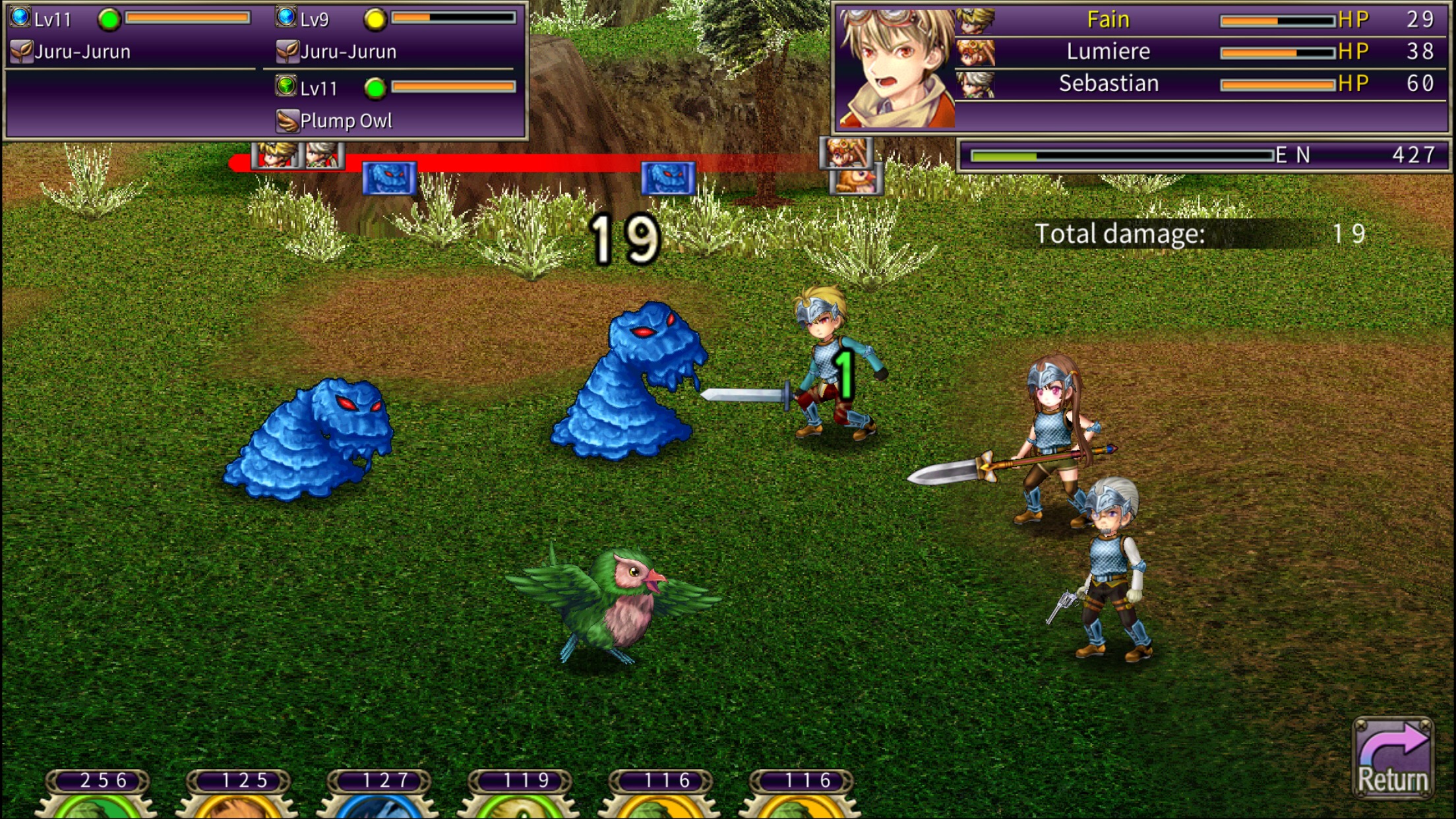 The story of Onigo Hunter follows a princess named Lumiere who is looking for her father, the missing king. Many presume he is dead, so the race is on to see who will succeed him. All one must do to prove worthy of the crown is to open up one of the doors that seals off the various ancient ruins scattered across the world. It’s said only those of royal blood can do it, but that’s not stopping others from trying. The old king was last seen heading to one of the islands containing those ruins, but the official search has been called off. Only licensed hunters can travel out to those islands, so the princess puts out a request that is answered by a young man named Fain. Together, Fain, Lumiere, and her butler Sebastian set forth to find out just what happened to the king. They’ll be joined before long by the game’s requisite mysterious girl, an automaton named Rama. What’s her deal? What’s everyone’s deal?

So yes, the same old yarn on that front. We’ve seen far too many stories with far too many similar characters for any of this to be all that exciting, but in typical EXE-Create fashion, the story is told somewhat competently and the characters are a lot of fun. Not exactly an adventure worth remembering, but it passes the time well enough. It’s just the first of many familiar elements in Onigo Hunter. You’ll also recognize the musical style, dungeon exploration, weapon crafting, seed-planting, and IAP systems from some of their previous games. I’m noticing that with each new release, EXE-Create is including more and more elements that you need to pay premium currency to unlock. As before, you don’t need to buy any of that stuff to beat the game, but it’s certainly getting more conspicuous over time. 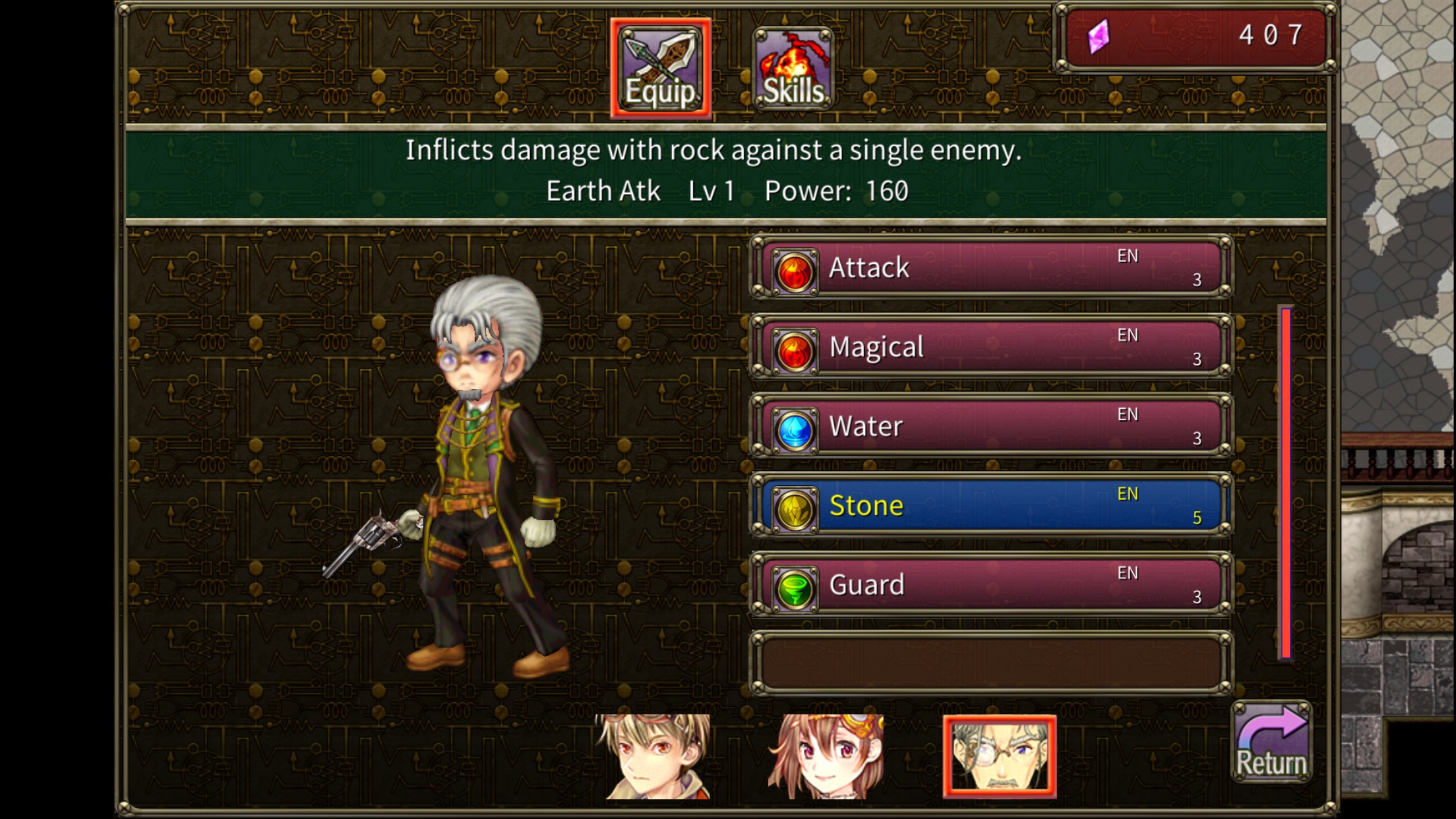 It’s probably easier to talk about what’s different. First, there’s no overworld map here. It’s just as well, as EXE-Create hasn’t done anything particularly interesting with those in a while. Similarly, there aren’t any explorable towns. You just get a map of the town with points of interest that you can tap on. The means of progression is a little different in principle, as well. Your hunter rank determines which areas you’re allowed to explore. You can earn points towards rank-ups by completing missions or capturing monsters, known in this game as Onigoes. There are mandatory story missions, but if your rank isn’t quite where it needs to be, you can always take on side quests to boost it.

The monster-catching mechanic is a decent idea, but it doesn’t work out to much in the end. In true Pokemon fashion, you’ll need to whittle down the monster’s life bar. You can then attempt to capture them using a special command. Captured monsters can be unleashed in battle through something called a Zenolith, buffing your characters and altering their elemental status. You can also fuse your captured Onigoes to create gear and items. What you can’t do is have them join your side in battle, which seems like a wasted opportunity to me. Capturing monsters adds a layer of tediousness even to battles against regular enemies, and the benefits from doing so barely outweigh the effort. 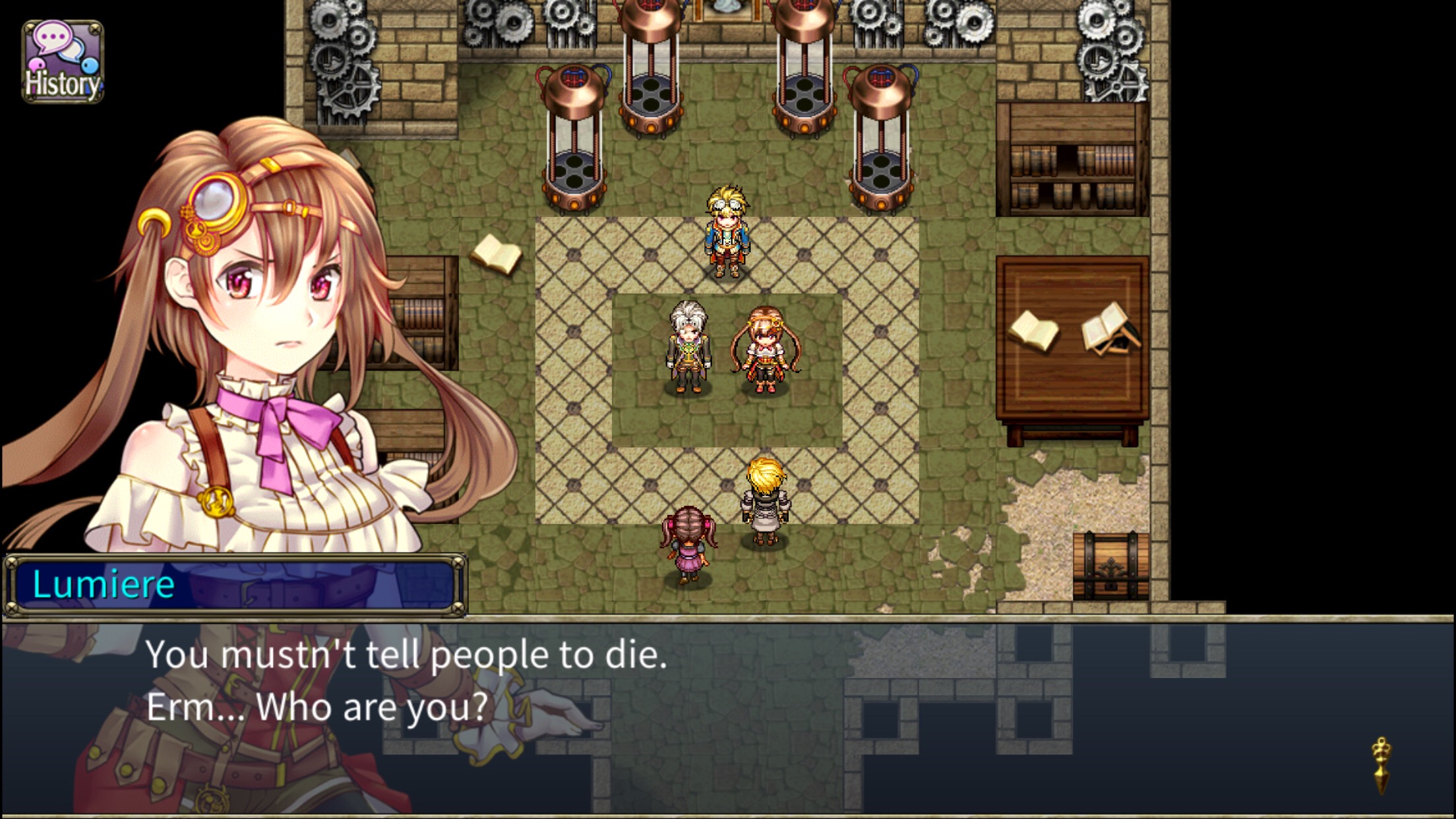 The battles could have used a little spice, too. They’re the usual turn-based sort with fight commands and special skills. One wrinkle is that your whole party shares one energy bar for skills. It doesn’t really change much in practice, though. I suppose one cool thing is that your equipment changes are visible on your characters, allowing you to create fashion nightmares as you see fit. The trade-off for that is that instead of EXE-Create’s nice sprite work, we get crudely-animated paper doll-style characters. There’s also that ugly side effect where most of your characters will be wearing the same outfits as each other throughout the game, rubbing out a lot of the visual variety for each member of the team. Still, it’s pretty neat to see all of your gear actually show up on your characters.

We’re left with the same business as usual, I’m afraid. Onigo Hunter has a couple of new pins affixed to its lapels, but in most respects, the experience is barely distinguishable from the other assorted EXE-Create games released by Kemco this year. It’s okay on its own merits. If you just want another traditional-style JRPG to stuff in your gob, it has a decent enough taste to it and will keep you chewing for a little while. Even the most tolerant of Kemco followers has got to be getting tired of this particular flavor by now, though. I know I am.