With the App Store being what it is it’s pretty rare to find a game mechanic that feels truly unique. Even more rare is to find a game that transcends its own unique gameplay with its overall experience. When it does happen though, it’s magic, and that is Old Man’s Journey ($4.99). It truly is magical. The “mountain moving" is a really unique mechanic that feels completely perfect for a touchscreen, but it’s really the story, the characters, and the environments that elevate Old Man’s Journey into a whole other stratosphere of awesome. 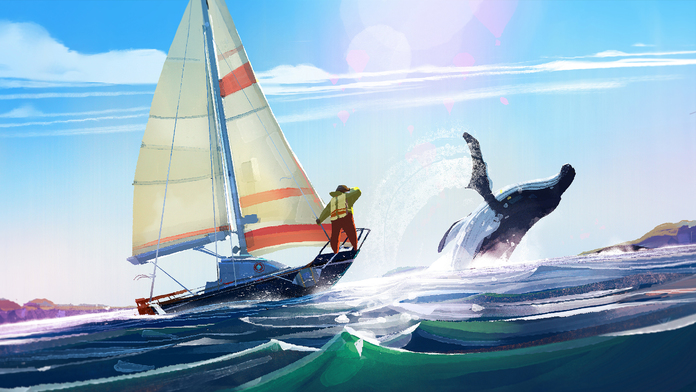 At its core, Old Man’s Journey has you guiding an old man through levels by way of changing the elevations of the various layers of depth in the scenery. That hill that dominates your character and feels like it’s just on the other side of where you’re standing? Grab it with your finger and pull it down so that its edge meets the edge of the hill you’re already standing on. If you can make the edges meet you’ll create a path for the old man, at least from the perspective you’re viewing the game at Monument Valley style, then you can progress through each scene.

Developer Broken Rules uses this neat mechanic to create some pretty interesting puzzles to solve along the way, but that’s really only a small aspect of Old Man’s Journey. The more powerful component of the game is experiencing the man’s life as he recalls various points from his own memories as he travels through the quirky and colorful game world. The lush water color-esque visuals and incredible amount of detail, not to mention the fantastic soundtrack, all come together to create an emotional and incredibly artsy experience.

It’s not a terribly long experience, but this is the first time I’ve not seen anyone complain about the game’s length. Most people are quite satisfied with the story as is and extending it further by just throwing more levels in or whatever would diminish the overall experience. This is like a perfect movie where you don’t want to see a sequel and don’t want to see deleted scenes (although you should check out our cool behind the scenes look at the development of Old Man’s Journey as it’s quite interesting).

Old Man’s Journey is pretty perfect as is, and as long as you enjoy these types of games and don’t go in looking for a hardcore challenge or hundreds of hours of gameplay, it’s a game that’ll likely stick with you for long after you’ve completed it.