The long and winding, ahem, journey of Old Man’s Journey, which we’ve been following for the past year, finally comes to an end when the game hits the App Store this Thursday. This story-driven adventure has you traveling across beautifully-illustrated lands interacting with the environment and recalling the memories of the old man protagonist’s life. While its main purpose is telling an emotional tale about reflection and redemption, the gameplay in Old Man’s Journey involves an interesting mechanic that lets you literally move mountains as you manipulate the elevations in various depths of the environment to make a clear path forward for the old man. In case you aren’t familiar with Old Man’s Journey at all, check out the gameplay trailer below to see it in action.

That unique landscape moving mechanic really caught my attention when I was first shown a very early version of the game during GDC 2016, and with Old Man’s Journey just about to launch developer Broken Rules has sent along a ton of neat behind the scenes information about the development and evolution of the game. First off is some footage of the first playable prototype of the landscape moving mechanic back when it was just a neat idea with pretty much no visuals or story to go along with it. Despite how crude it may look in this video, it actually looks quite similar to the finished product mechanically and it’s neat to see such a unique idea being realized.

Next they had to determine what sort of art style to use to build around that cool mechanic they’d developed. Here are three different looks at some concept art of the same level, one in sketchbook style, then the same scene colored in, and finally that same scene again done in a more smoothed out and stylized look. 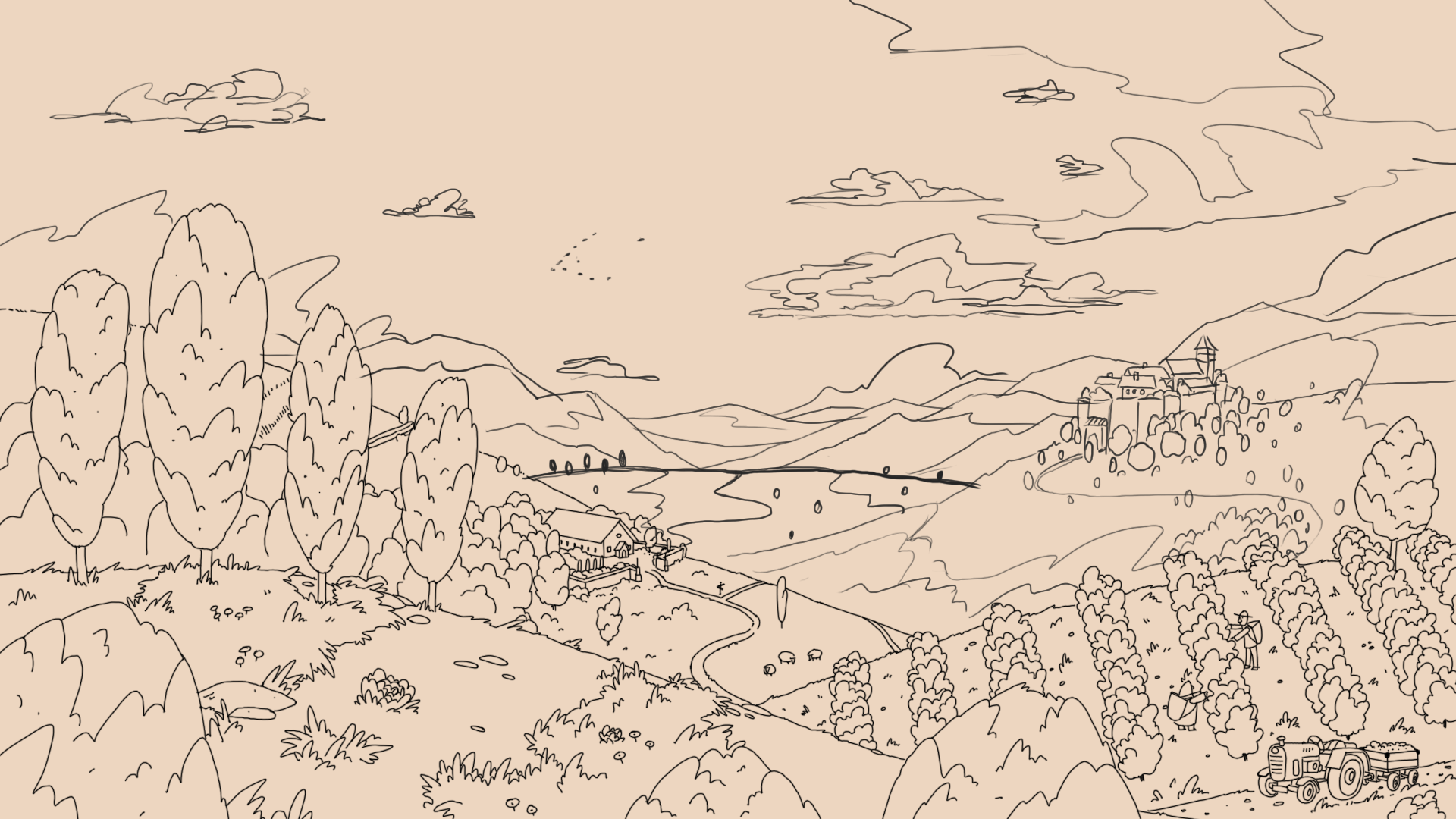 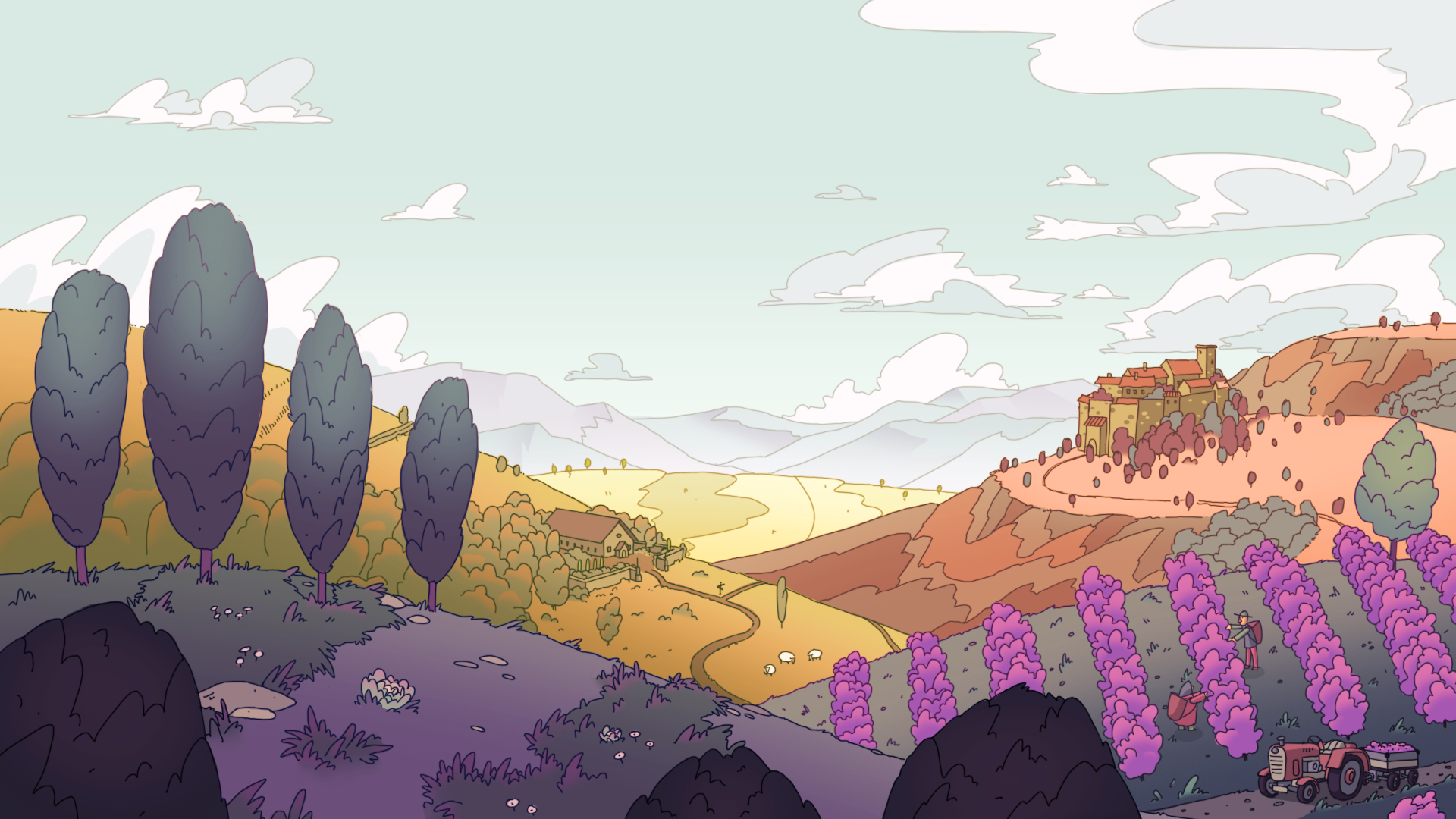 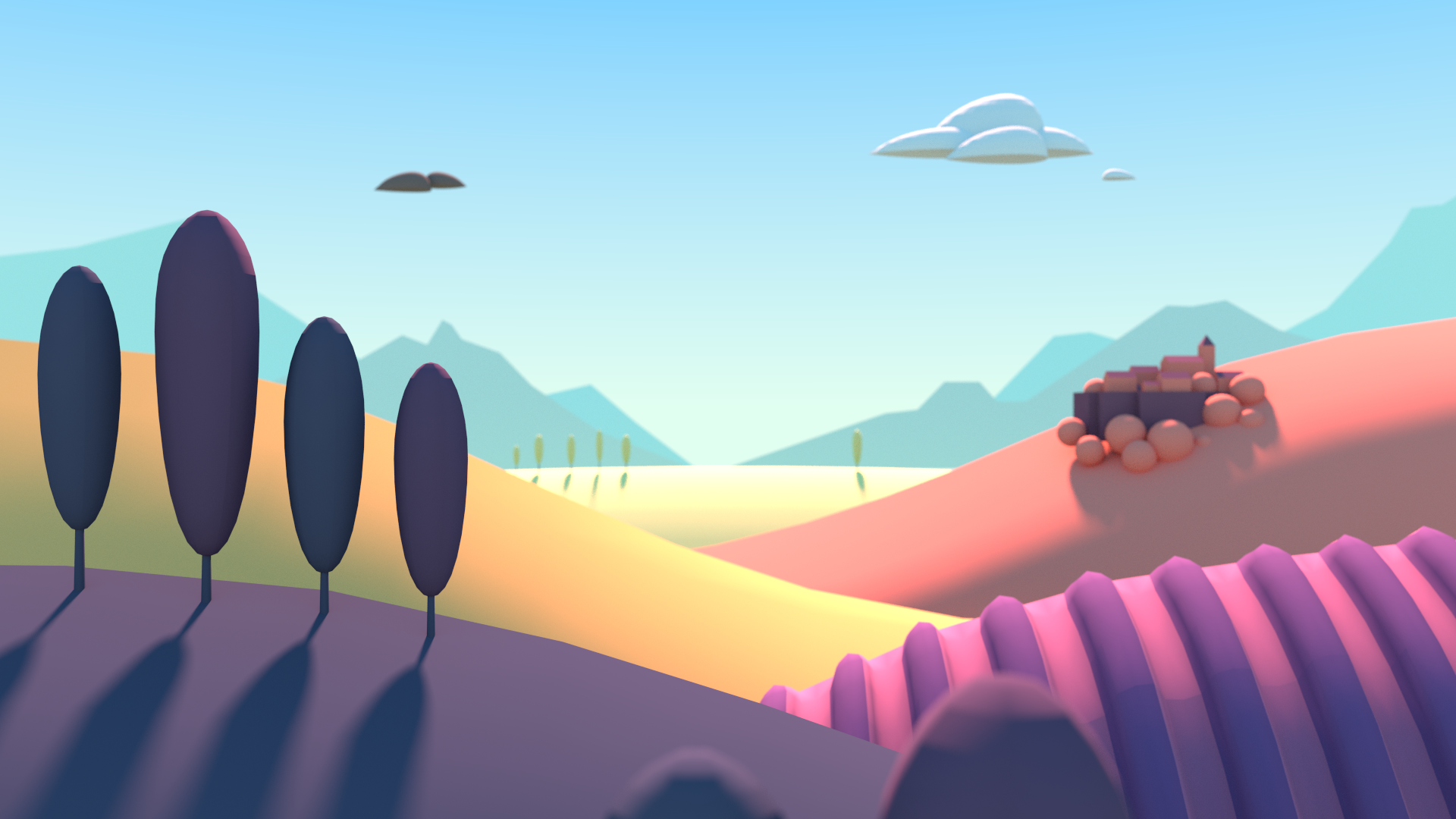 The final art style ended up not being exactly like any of these options, but it probably most closely resembles the second style. But another piece of concept art that was sent along shows an additional scene in the smoothed out, ’90s-style 3D graphics of that third example above, and could you imagine if this is how the entirety of Old Man’s Journey looked? 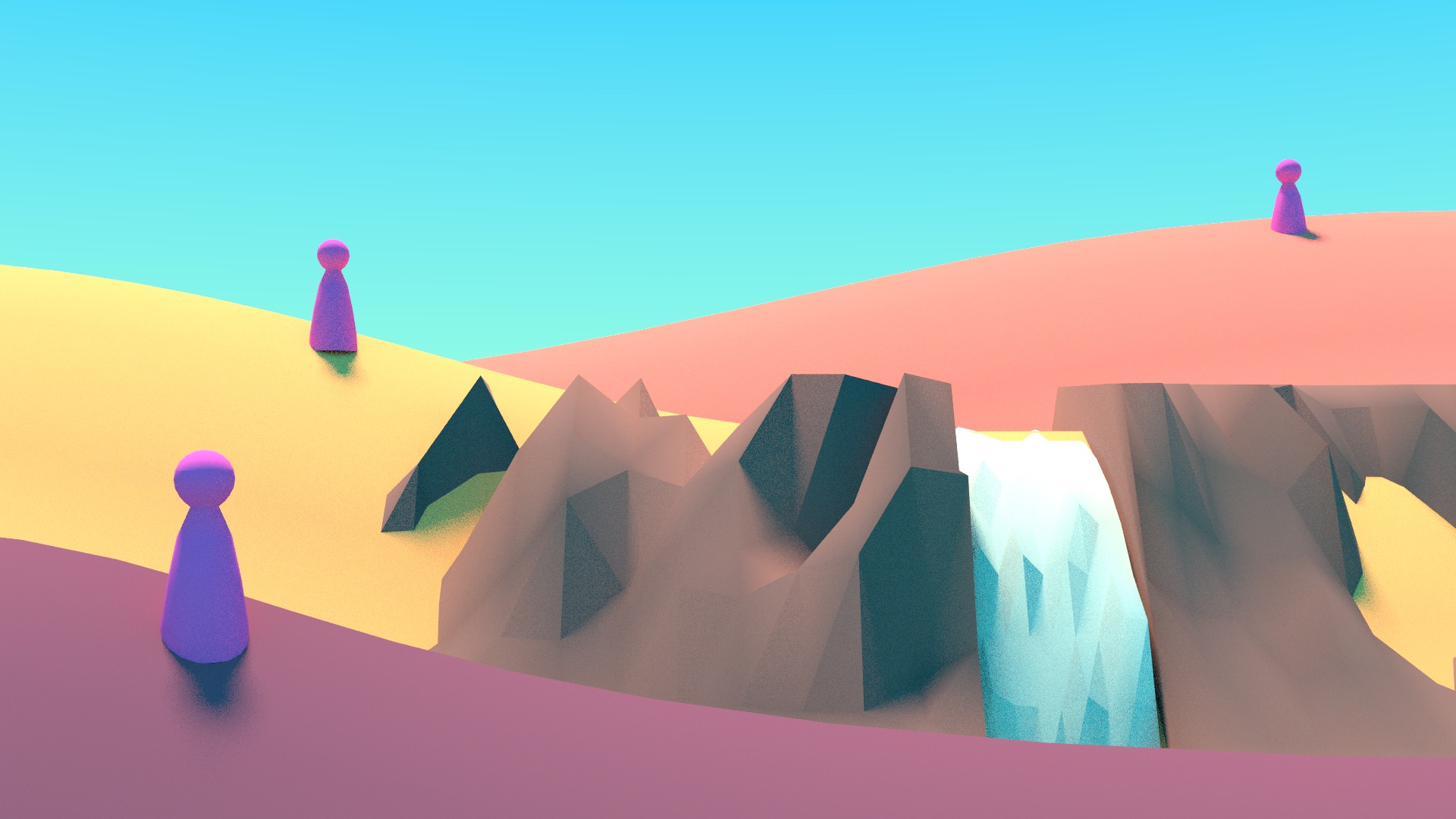 It has a certain charm, but I’m sure glad they went with the more illustrated look in the end. One other interesting idea they were considering for the game was doing actual 3D visuals for things like the buildings and even the vehicles. This would have given the game sort of a 2.5D look, which could have been quite cool but also still doesn’t seem like as good a fit as the final style they went with. 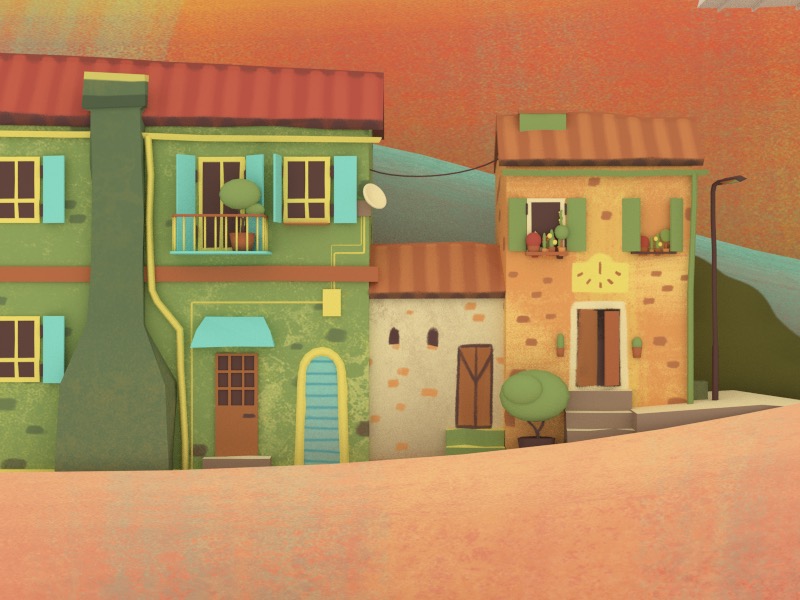 It definitely would have been neat to have those 3D elements giving depth to the landscapes, but I also think it would have taken away from the storybook vibe of the game. Talking about depth though brings me to my next set of cool behind the scenes stuff. The landscapes in Old Man’s Journey are made up of many layers which can give a feeling of depth by using parallax scrolling and also is pretty important for the landscape-sliding mechanics. Well, when you zoom out a bit from a finished level and view it in the team’s level editor, you can get a great sense of just how many layers there are that make up each environment. Check these out.

I especially love that top one where the view zooms out and reveals just how tall and complex the level really is. Next up is several looks at how a level evolves from concept images into a final product. In this example it’s the watermill level which starts out as a sketch, then has the old man’s movement points roughed in, then is painted out before having finishing touches like shadows and details added into the final image. The images are short and wide so feel free to click them for a larger view.

Here’s a similar look at the hotel level as it goes from sketch, to painted, to detailed, to gorgeous final product. As with the images above, these images are somewhat tiny so feel free to click on any of them to get the larger version. Also, I didn’t include this because it was a bit awkward to actually embed in this post due to its dimensions, but if you want to see this process animated together then check out this gif.

This next example was a bit of a friendlier size for embedding, so I’ve gone ahead and embedded it below. It’s a really cool look at how all the elements comes together, so check out this animation of the evolution of the level titled The Dive.

Well, that about wraps it up for our little journey (no I do not get tired of using that joke) into the creation of Old Man’s Journey. I absolutely love this sort of behind the scenes stuff about how a game is made, and especially being able to see very early concept stuff and then be able to compare it to the super-polished finished products. I hope you also enjoyed peeking behind the curtain of this game, and hopefully plenty of people will be picking up Old Man’s Journey when it launches this Thursday and will have an even greater appreciation into the kind of work and techniques that went into its creation.