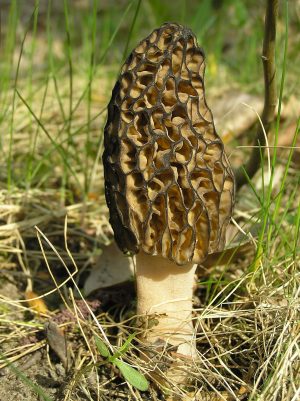 Believe it or not, it’s Wednesday again, and it’s also National Mushroom Hunting Day. I’m not sure if it’s exclusively a Midwestern thing, but this time of year (and actually, a few weeks prior) is just gangbusters for hunting morel mushrooms. Morels are pretty interesting fungi, as like truffles, people really haven’t figured out how to produce them on a mass scale like all the other food we have factory farmed. Instead, mushroom hunters get up super early, head out to their own highly prized and secretive spots where they pop up, and go wild harvesting them. It’s super lucrative, as ~4 ounces (roughly enough fresh morels to fill a normal sized sandwich bag) can easily sell for $10-20 locally, or for far more online when dried. A good hunt can yield multiple coolers full of ‘shrooms, which is why everyone keeps their hunting grounds top secret. Morels have an incredibly unique taste, and if you’re ever looking to treat yo’self I recommend picking some up and making some kind of mushroom risotto. They’re reasonably easy to find dried at Whole Foods and other “high-end" grocery stores. Oh wait, this is an iPhone games site. Right. Well, hopefully you learned something new. Anyway, a ton of new iOS games have come out in the last week.

As usual, we’ve listed all the new ones that have been posted to our forums. If your game isn’t here, get a thread on our forums before we post our full roundup later this evening. We’re publishing this a little later than usual as I was sort of waiting for some of the games coming out on the 18th to randomly pop up this morning, but, maybe developers actually meant the 18th this week.