The clicker genre can still surprise and delight, it turns out. Jake Hollands and Devolver Digital have delivered a fantastic narrative clicker in Spaceplan ($2.99) that is well worth checking out even if you’re clickered out on clickers. While the core hallmarks of the clicker genre are here with lots of clicking and idle energy generators, with waiting outside the app playing a role in the game. But it also features a unique sci-fi story that reveals over time that has an incremental narrative game influence, and a finite scenario to enjoy. Plus, there’s lots of potatoes.

Yes, potatoes. You’re generating power to grow and harvest potatoes, as you figure out just why the heck Earth has died. Eventually, time travel gets involved. But along the way, you’ll be generating energy to build ever more elaborate potato structures, like potato towers, and potato satellites. Spaceplan is described as a narrative clicker, and what that means for you, the player, is that there’s a definite ending to the game. It doesn’t take an excessive amount of time or effort to reach, either. A couple days with Spaceplan, depending on how often you check in to the game, and you’ll be set to beat this one. The ending is a bit of a weird one, but thankfully you can re-do it and maybe it will make sense on the second go-around. Or you can just reset and re-do the Spaceplan experience. The benefit to a limited, narrative clicker is that the game doesn’t hit that point of boredom that other clickers do. When massive numbers and massive hordes of idle gains start to stack on top of one another, they can eventually become meaningless. Spaceplan instead perhaps leaves you wanting more. Maybe getting more would start to grow stale, but instead I found myself a little disappointed and surprised that Spaceplan ended when it did.

While Spaceplan is a clicker, it also has elements of a Lifeline ($2.99) style incremental narrative game. As time goes on and new upgrades are unlocked, more of the story from your computer is told. The dialogue is irreverent, as this is a game about trying to save Earth using potatoes and time travel. There’s a couple of cinematics in the game, and they have the same sort of irreverence that you’d expect. Also, like in many other Devolver games, Fork Parker, their ‘fictional’ CEO (though I have it on good word that there is a real Fork Parker) makes a cameo appearance. It’s a goofy experience. And yet, with the music and minimalist space atmosphere, it’s got a compelling feeling to the experience that helps you take it just seriously enough. 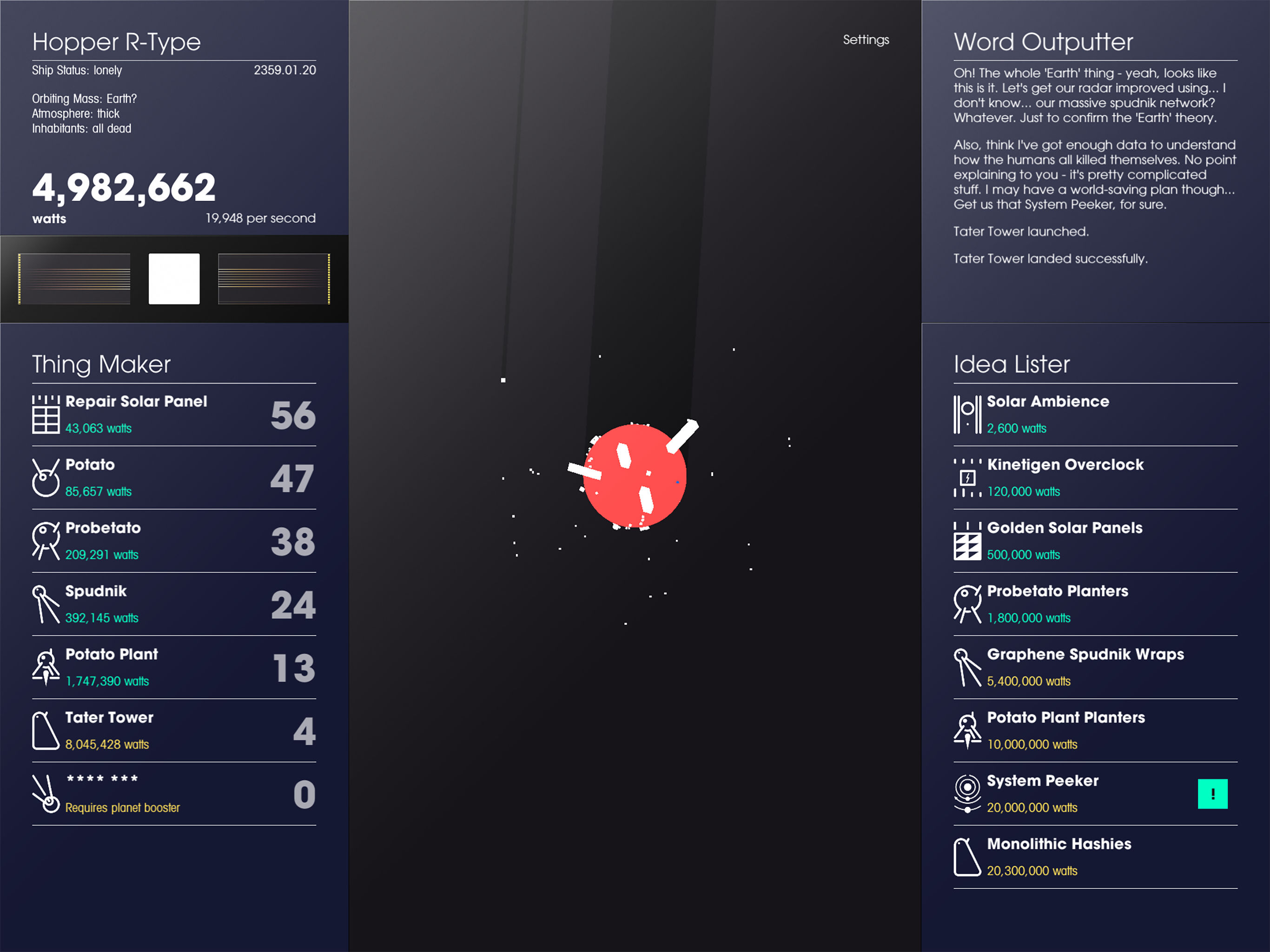 Spaceplan gives you two things to buy with the energy you generate in the game: either ‘things’ that generate more power for you, or ideas that give you upgrades or are required to advance. One interesting aspect is that Spaceplan actually throws a timing element into buying a certain object. I don’t want to reveal what it is, but like everything else, potatoes are involved. But this does provide a clever twist on what the genre provides, where the things you build just pop up out of nowhere. Instead, there’s a bit more meaning in Spaceplan to what you have to do. 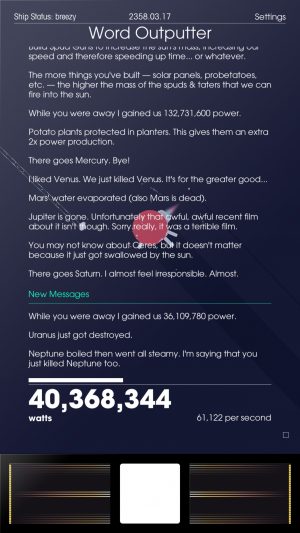 Spaceplan tries to incentivize actually clicking through the use of an upgrade that multiplies your production while actually clicking. Your idle gains while outside of the app give you a lot as is, so sometimes it’s worth just leaving and doing nothing if you’ve hit a wall with your power gains. But, when you are in the app, frantically clicking to get more power for more potatoes, you at least have a benefit for all the clicking. Do note that with the clicking button being in one spot at the bottom center of the screen on iPhone, it’s a bit uncomfortable versus games that let you just mash on a larger area wherever. The iPad’s layout might be more comfortable for you. Also, the game doesn’t have notifications to return to the game when your idle power generation has stopped, so it is possible to forget. The good news: if you hate games with notifications, this game cannot notify you at all!

You do have to wait at times, as you can hit a wall with how much you’re earning through clicking, so that you have to leave and let the idle gains take over, lest you mash your finger into oblivion. Heh, mash. This is ultimately a clicker, so if you have an extreme distaste for the genre, maybe this isn’t for you. But the thing is that the clicking is just a means to an end. It’s narratively justified, and the game is a finite one. You don’t get into that point of boredom that many clickers have in their long run. Spaceplan just wants to tell an interesting story, moves along the elements of the game through clicker elements, and is seemingly designed around you only wanting to play for short bursts at a time. Not every clicker could be like Spaceplan, but Spaceplan is so engaging because it uses the clicker constraints to tell its story. I’d be really interested to see how other game could use the narrative clicker concept, perhaps with branching path storytelling? I mentioned incremental narrative games, and with the alternate endings those often have, I could see a narrative clicker incorporating something like that.

While Spaceplan was only in my life for a few days, it was a major part of my life for those few days. It’s a really cool and engaging experience, and a unique take on the clicker that even skeptics of the genre should check out. Also, it has more potatoes that you could ever imagine.