Writing about these kind of idle clicker upgrader games is always difficult, as it feels like in mid-2017 everything you’d ever do in one of these has been done, with the main difference being how developers mix up the established mechanics and how they apply the theme of the game. East Side Games has a winner on their hands with Trailer Park Boys: Greasy Money (Free) as it mixes up established mechanics in a way that makes a dumb amount of sense inside of the scope of the Trailer Park Boys universe.

Trailer Park Boys, if you’ve never heard of it, started as a mockumentary movie about life in a Canadian trailer park- The original film was received well enough to spin it off into a TV show. 11 seasons later, Trailer Park Boys is still going strong. Seasons of Trailer Park Boys follow the cadence of the main characters, Ricky and Julian, being released from jail, spending the season building new (and typically ridiculous) criminal enterprises, then ending up back in jail on the last episode of the season. Hilariously enough, the rhythm the show follows also works incredibly well in an idle clicker as you effectively “prestige" each season, which inside of the scope of Trailer Park Boys fits incredibly well thematically. 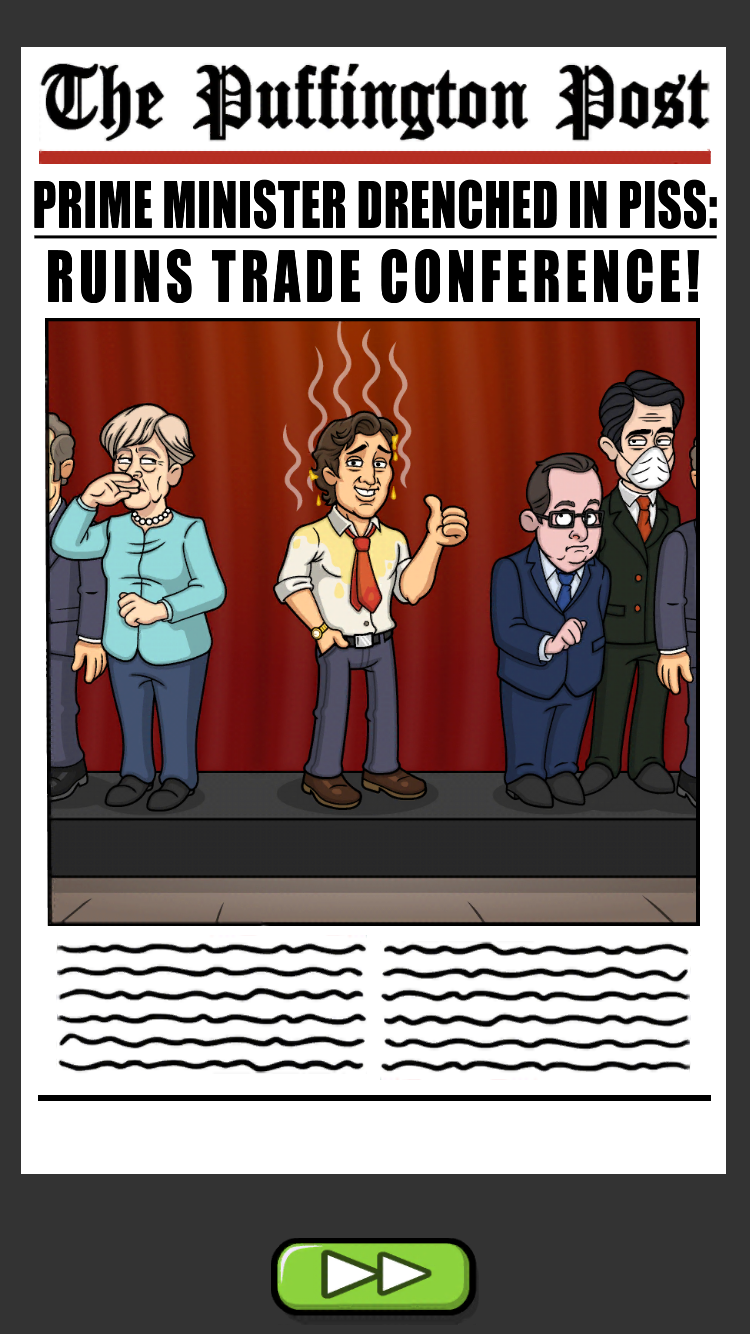 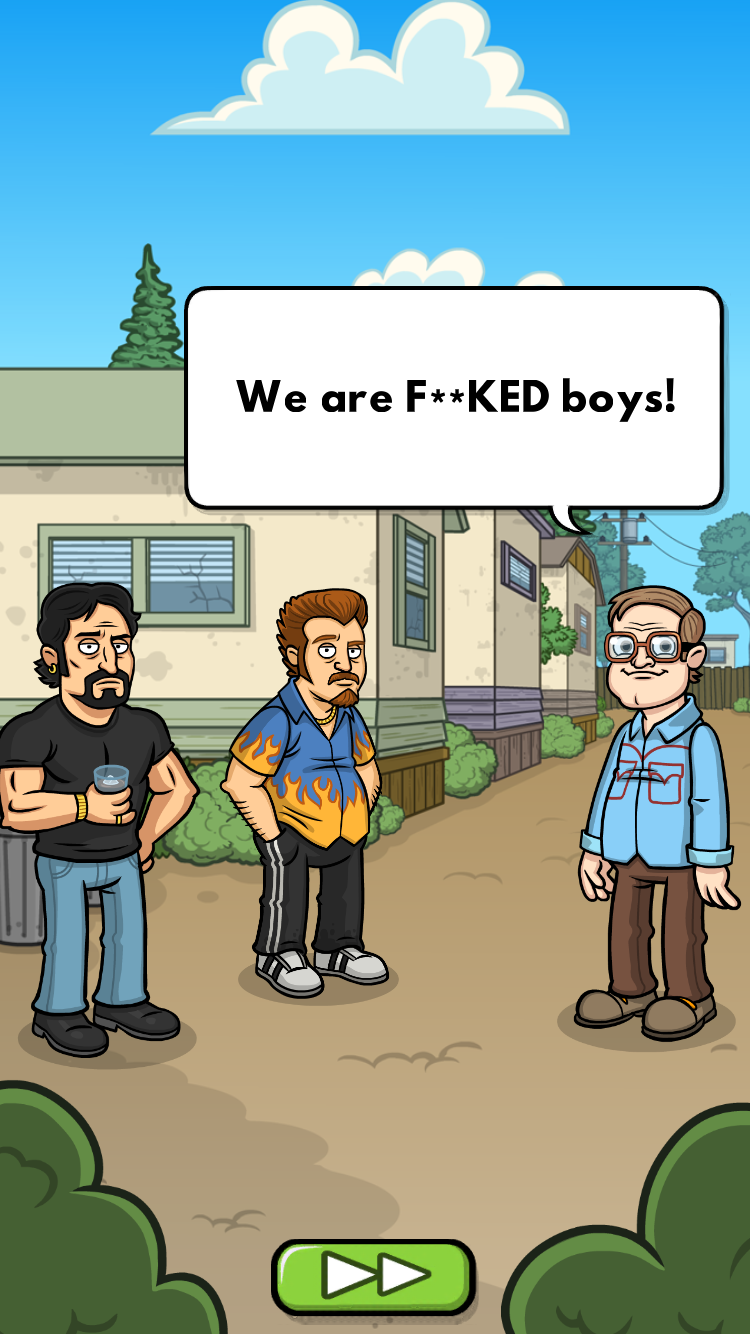 The game kicks off with the Canadian prime minister getting hit with a piss jug, playing off a joke from season six of the show where Ricky’s dad Ray, an old trucker, used to just pee in a jug to avoid stopping. Then he’d throw these jugs all over the trailer park. Here’s the scene in question, which potentially is NSFW:

The embarrassment causes the Canadian economy to tank, devaluing their money, leading to the incredible amount of currency you’ll typically generate in these kind of idle clickers make total sense- As it’s all worth nothing. From there, Ricky, Julian and Bubbles get out of jail, find their way back to the Sunnyvale Trailer park, and begin building their criminal empire with Ricky’s siphoned gas station.

Similar to a lot of these idle clickers, you tap every now and again to collect profits from your gas station and then re-invest that money into increasing the multiplier of that business. (In this case, it’s explained that you’re spending money on advertising to buy more customers, which pay you more money.) Once you’ve got enough money saved up, you unlock your next illegitimate business, Julian’s Dirty Dancer strip club, which is then upgraded in an identical fashion. 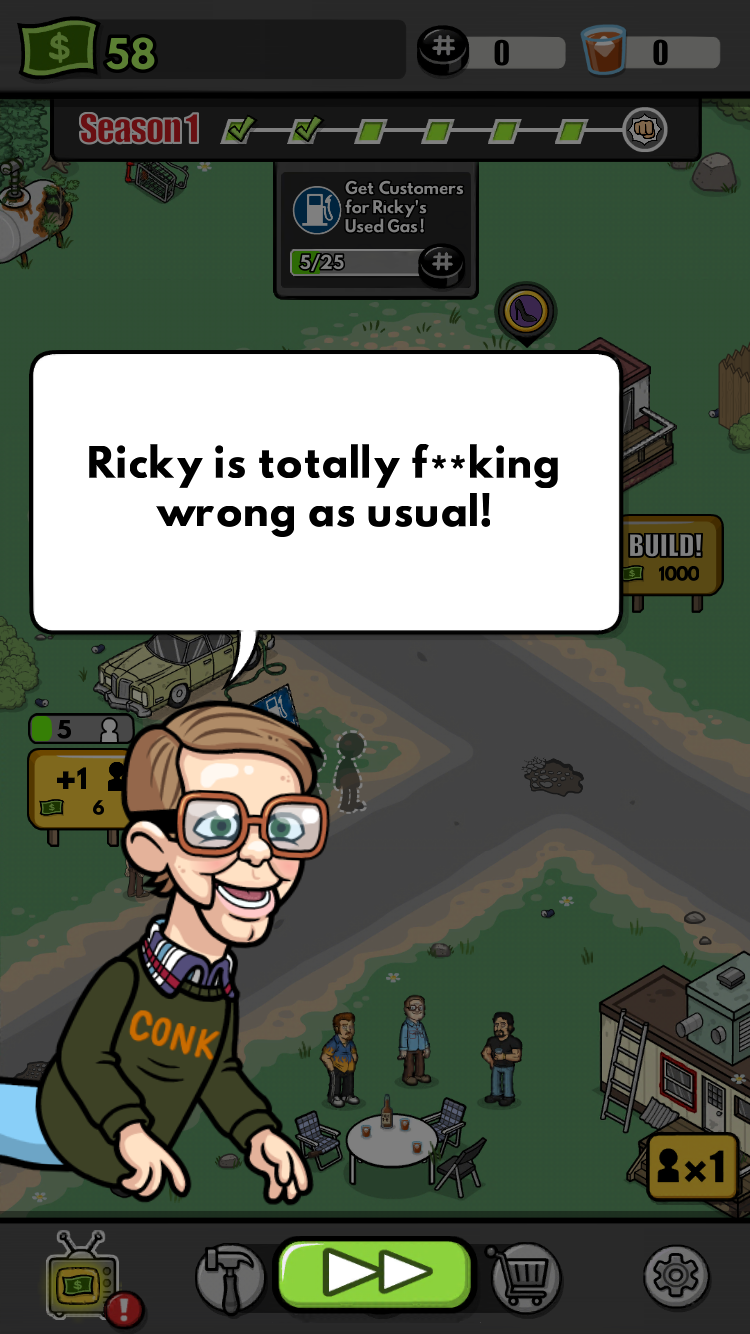 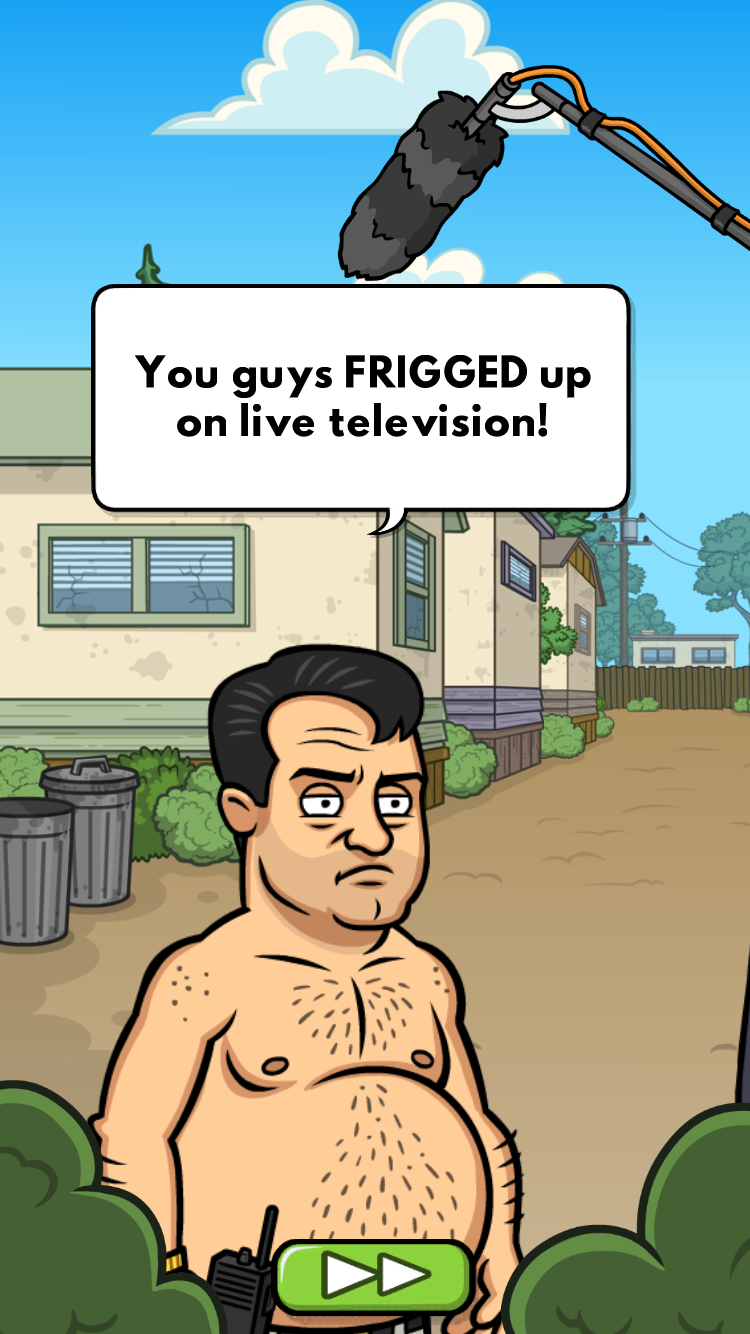 Like the show, the game is broken up into “seasons," with each season giving you a series of objectives to complete like gaining a certain amount of customers, unlocking new businesses, and more. Each of these objectives typically offers some kind of reward which might be the game’s two currencies, hash coins and liquor, or potentially a car trunk to break into which is Greasy Money’s equivalent to a card pack.

In these trunks you’ll get hash coins and liquor, but you’ll also get cards which both unlock new characters as well as upgrade your existing characters. Upgrading Trevor (one of the lackeys from the show) allows him to automatically collect money from more of your businesses, while upgrading Ricky gives you more power in boss fights. Of course, like all these games, you can also just buy whatever upgrades you want and currencies you’re low on, but you really never need to- Particularly if you don’t mind watching an ad every now and again. 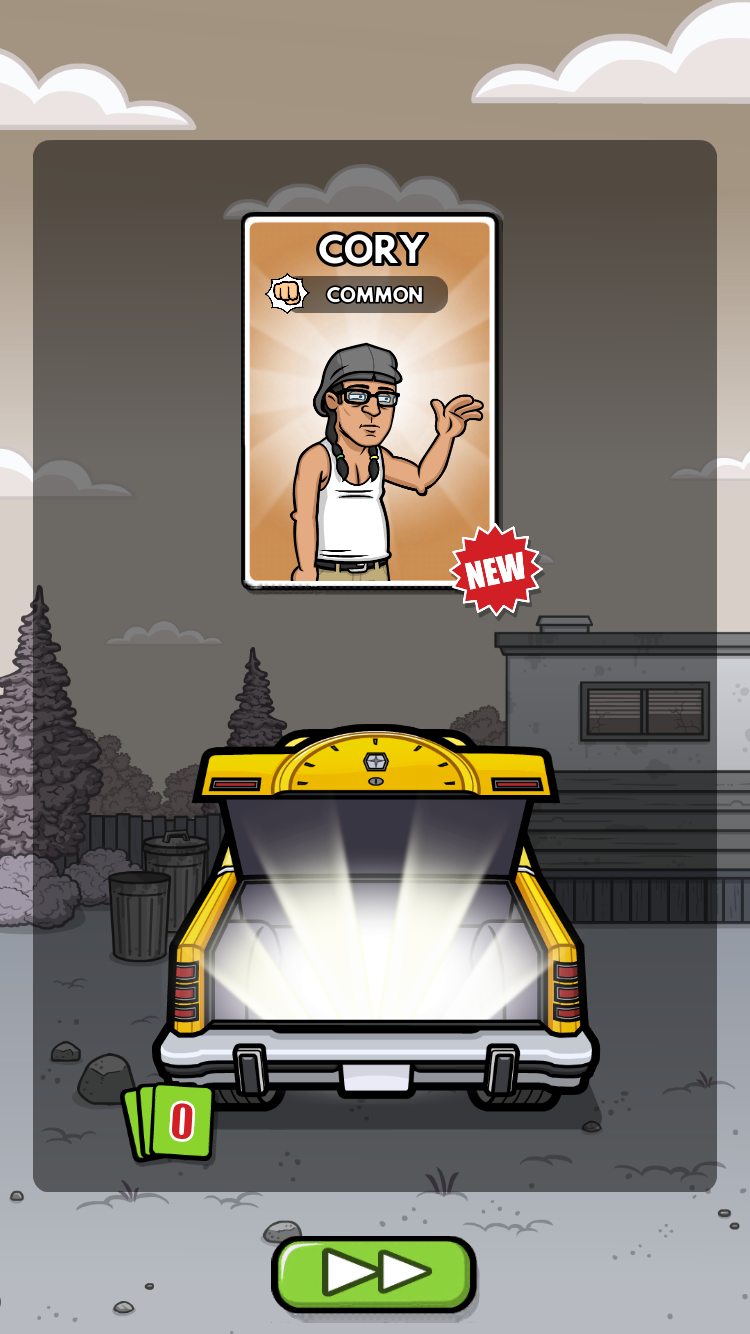 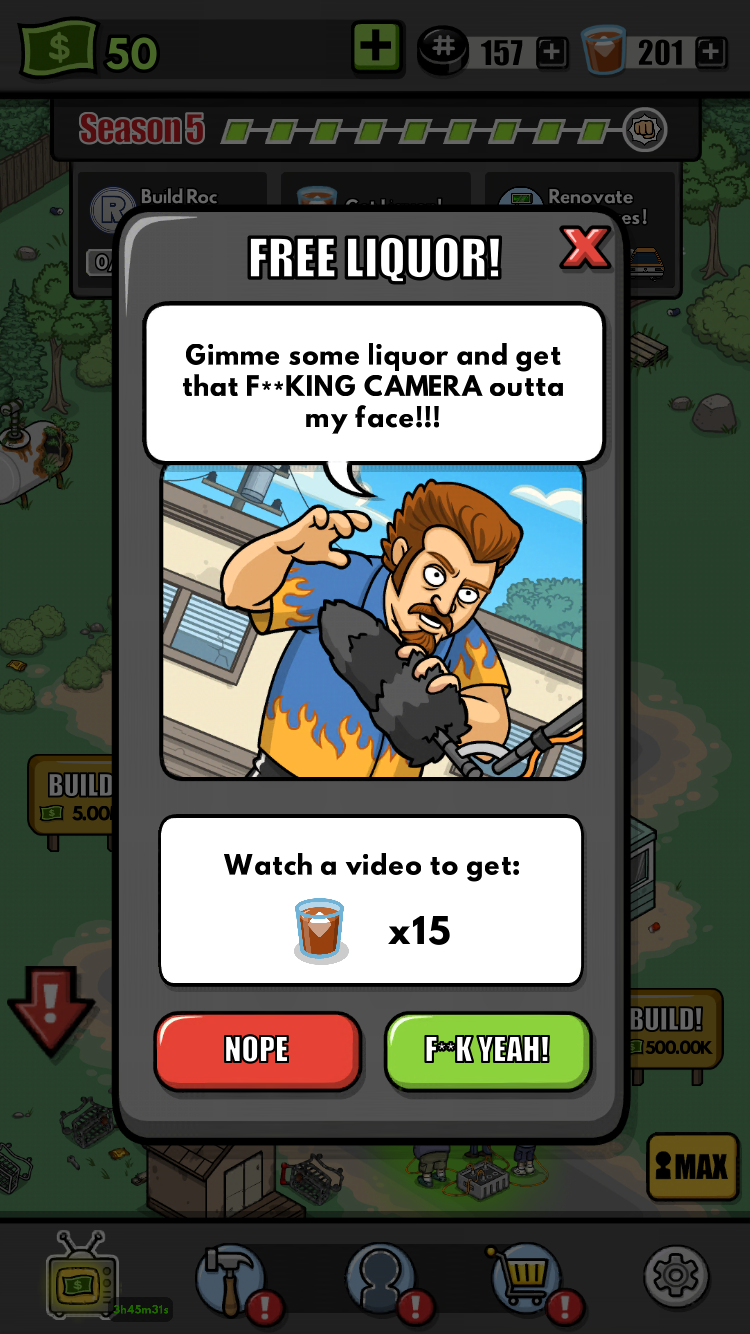 Once you complete all the objectives of a season, you have a “boss fight" which really just amounts to tapping the screen as quickly as you can to flip off whatever boss you’re “fighting". The faster you tap, the more bonus car trunks you can open. From there you get thrown in jail, the next season begins with you getting out, and you start building up Sunnyvale again, losing all of your money and customers but keeping whatever passive upgrades you made the last time you were out.

As mentioned, it’s crazy how well this cadence fits the theme of the show. When playing these kind of idle games, it’s always seemed a little weird how none of them really build the idea of prestiging into an actual story element. Usually you just dive into a menu, hit a button, it warns you you’re going to lose all your stuff but keep your upgrades, and you start again. 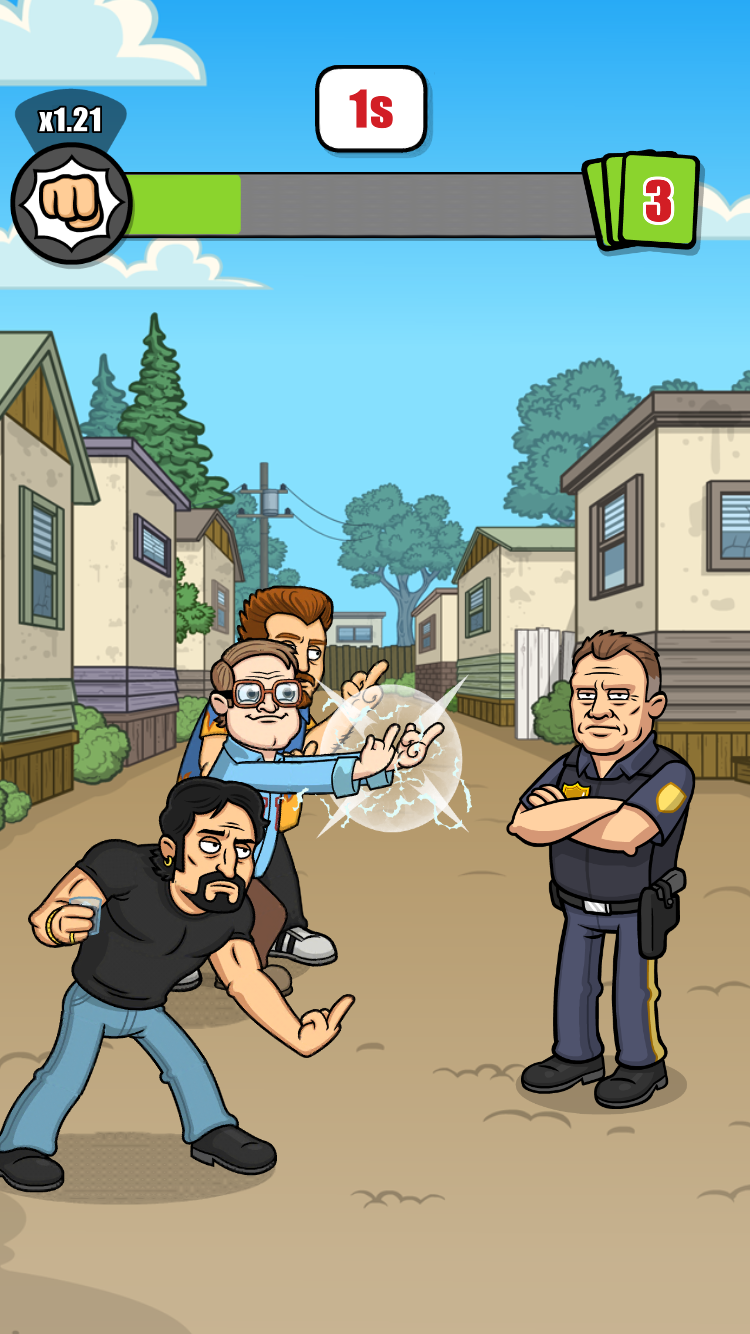 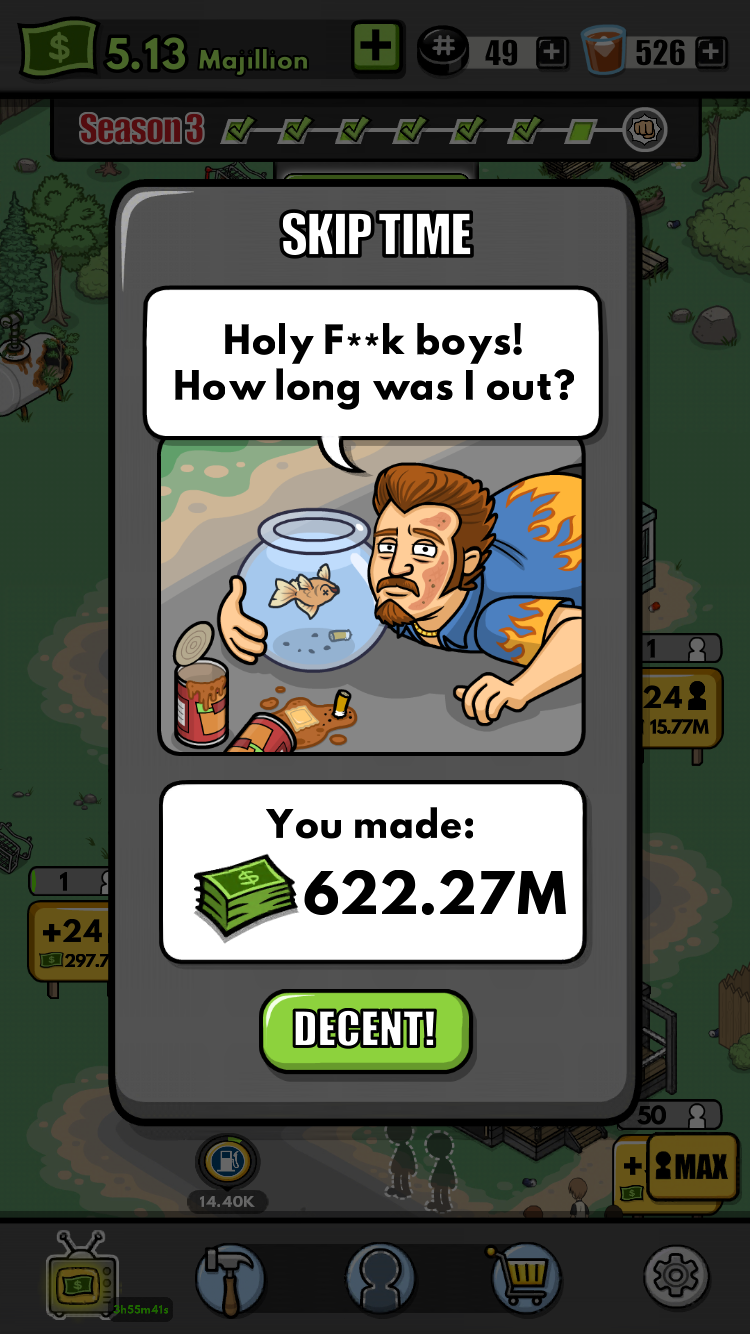 It’s borderline incredible how much fan service East Side Games managed to pack into Trailer Park Boys: Greasy Money. The App Store is no stranger to games that feature some sort of branding or tie-in with popular IP, but games that embrace that IP as well as Greasy Money did are few and far between. You can really tell the developers are actually fans of the show, instead of just a team that was assigned to reskin a clicker with whatever IP someone else at the company finished negotiating the rights on. All the mechanics make sense inside of the Trailer Park Boys universe, even down to how the game asks you to rate it.

Speaking of rating, from a review perspective, this game itself is super difficult to rate. If you’re a fan of Trailer Park Boys, Greasy Money is an effortless recommendation. If you’re not into the show, it’s still an incredibly competent idle game that mixes up enough of the standard mechanics in a way that somehow manages to feel fresh- Particularly with the boss battles and the way the prestige system works. However, it’s difficult to say if you’ll appreciate it as much as someone who is picking up every tiny reference the game drops. Personally, I love Trailer Park Boys, and idle clicker games are a guilty pleasure, so this is the perfect game for me. I could definitely see how it might not be for everyone though, particularly with the (censored) swearing and drug themes which pop up.

With that said, if you’ve really never seen Trailer Park Boys before, and you like stupid humor, the whole show is on Netflix. Check it out, and I promise if it clicks with you you’ll be spouting Rickyisms in no time.