For years, Kemco has been nothing if not consistent in their slate of published games. They’ve been a mobile gamer’s one-stop shop for budget JRPGs, largely filtered through the lenses of four separate developers, each one doing as much as they can with as little time and as few fresh assets as possible. To be fair to the company, there’s a demand for those kinds of games and not many are rushing to fill it on iOS anymore, with the way things have shifted in the market towards free-to-play social games. But even the most ravenous of niches can hit a saturation point if you push hard enough, and it almost feels like Kemco was intentionally looking for that line. Perhaps they finally found it, as 2017 has seen the publisher branching out in more new directions than they had in the previous four years combined. Yodanji ($2.99) is the latest fruit of those labors, and like its similarly-minded stablemate Djinn Caster ($4.99), it’s quite good. 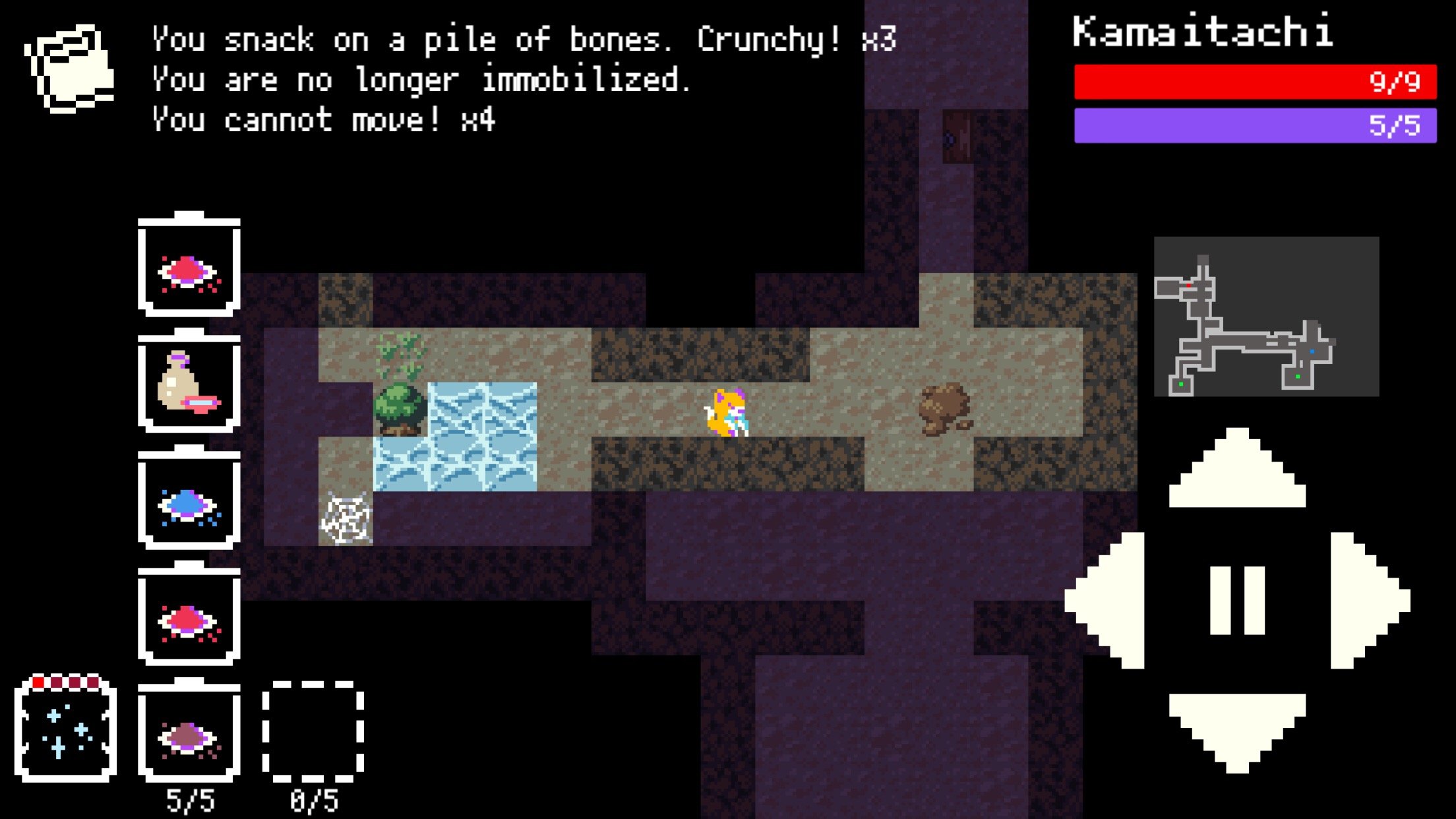 Yodanji is, as it says in its title, a roguelike. Specifically, it’s a Japanese-style roguelike in the vein of games like Shiren the Wanderer, Pokemon Mystery Dungeon, or Rogue Ninja. Instead of going with a more typical fantasy vibe, Yodanji is all about yokai, mythical creatures drawn from Japanese folk tales. Most long-time gamers have some experience with particular kinds of yokai, given that they’re frequently included as enemies in Japanese games. The word itself has been thrust into a little spotlight thanks to Level 5’s Yo-Kai Watch, a popular cross-media children’s brand from that has seen a handful of releases on the 3DS and mobile platforms. As you might expect, Yodanji sees you battling against these creatures, but they’re also the heroes. In fact, every enemy you come across in the game can eventually be unlocked as a playable character. Your goal is to take your chosen yokai down through the floors of a dungeon, collecting scrolls, battling enemies, and trying not to starve. Depending on the mode you select, you’re either trying to reach the end of the dungeon or going as deep as you possibly can before succumbing. 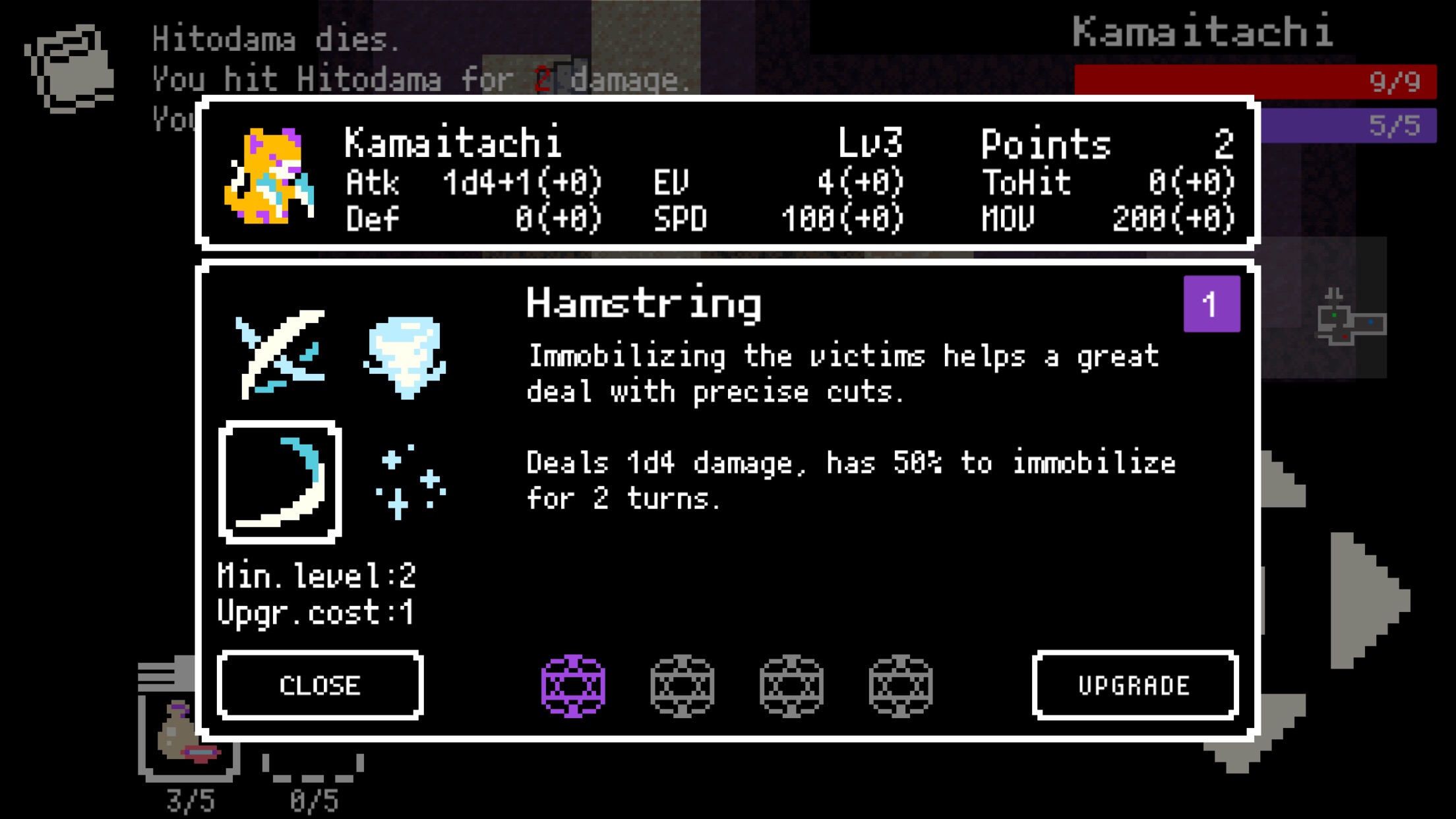 You’ll start of with a choice of three different yokai, with the particular ones you get apparently depending on some sort of magic involving your physical location. Each yokai has their own stats and unique set of abilities they can level up, so every character will require slightly different tactics in order to survive. The first goal you’ll likely want to aim for is to unlock the remaining 17 characters. You can unlock a new character by collecting three scrolls and taking them to the end of the dungeon. If that’s proving too difficult in the game’s default mode, there’s an easier mode that will penalize your final score but still allow you to collect the characters. While you probably won’t care too much about that penalty while you’re trying to fill out the roster, once that job is done obtaining a high score serves as the main reason to revisit the regular modes. Luckily, the game also includes an endless dungeon mode, providing yet another target to aim for.

Admittedly, this is a genre that could charitably be called well-worn, even on mobile. But Yodanji does a few things that make it feel a little different from the bulk of the other roguelikes on the platform. One big point is that your character doesn’t level up in a traditional manner. Instead, you need to find spirits called hitodama to improve your stats and give you some valuable points you can sink into one of your skills. That gives you less of an incentive to kill enemies, but worry not. There’s another reason you’ll want to stalk your foes. Yodanji uses a hunger mechanic, and food items are legitimately hard to come by relative to other roguelikes of this sort. But most enemies will leave a carcass or some bones behind, and your monstrous character has no compunctions about snacking down on them. Still, if you’re not hungry, you might want to think twice about engaging with a dangerous foe. 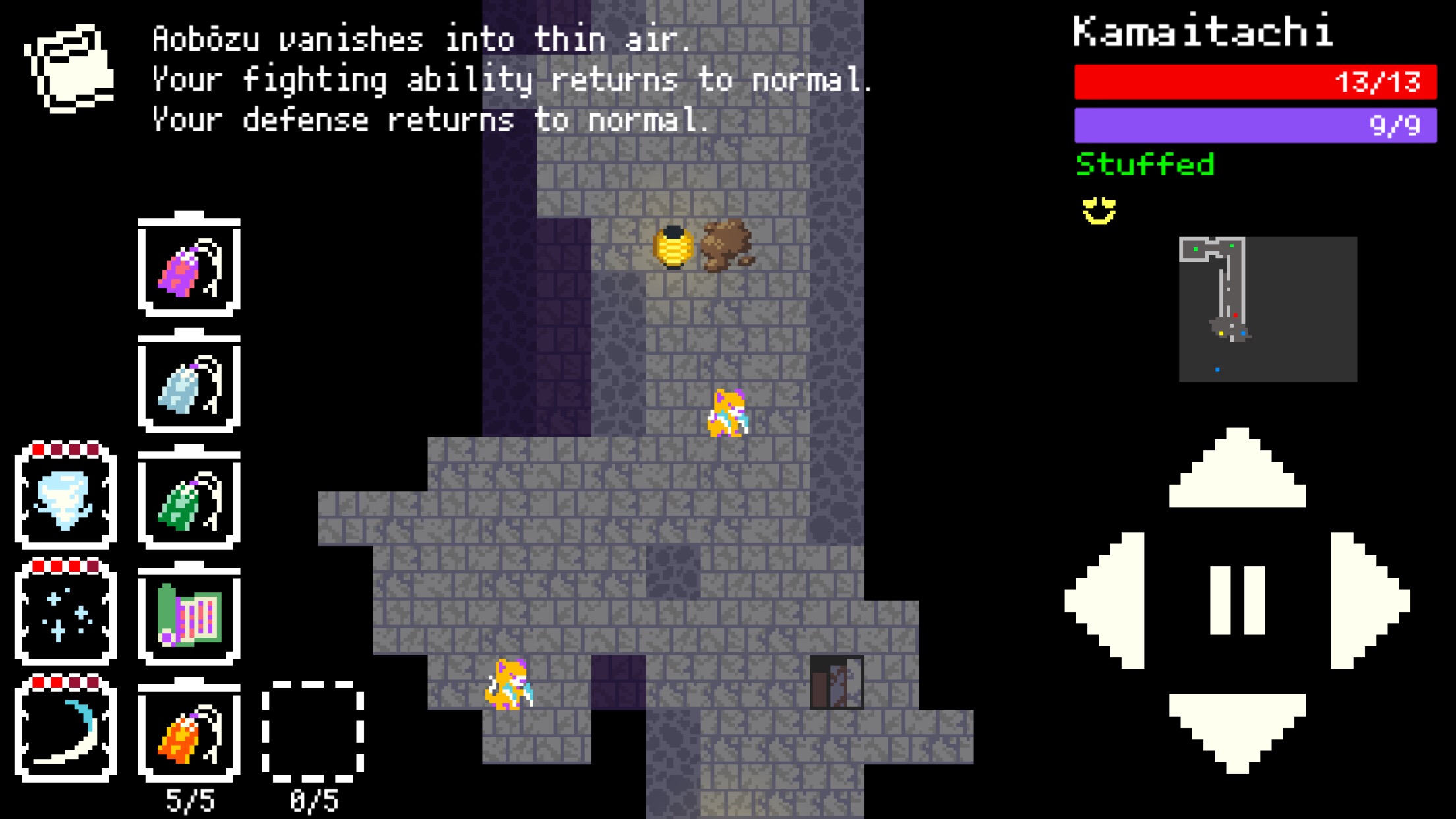 Your character also has an incredibly tight inventory limit. You can only carry five items, and that includes any permanent ones you want to hang onto such as charms and scrolls. Given that one of the major goals of the game involves finding and bringing three scrolls to the end of the dungeon, your tight inventory at the start will need to be carved down to the barest of essentials after a few floors. Carrying around food items and other temporary bonuses seems to be a poor use of that space, so you’ll have to take to using what you find on the spot. It’s an interesting way of addressing that common urge to hoard such items. Of course, it also leaves you even more subject to the whims of luck than usual.

Yodanji goes for a simple retro style for its visuals and sound, and I suppose the best thing I can say about that is that it suffices. Everything is clear enough on-screen, and some of the squashed yokai designs are cute. I’m less enthusiastic about the music, which consists largely of one repetitive dirge that loops a little too quickly. Controls are straightforward, with a virtual directional pad for movement and a few buttons for using items, abilities, and interacting with objects. Yodanji features its own in-game leaderboards that let you see how you’re doing against other players. There are no IAPs at all, either.

Sure, it’s largely meat and potatoes for this genre, but Yodanji has a few elements that give it its own feel. The theme is also pretty fresh, and as an overall package, the game is certainly an unexpected one from Kemco. I appreciate that they’re mixing these kinds of things into their usual line-up, and I’m happy that these experiments are turning out as good as they have been so far. Yodanji probably won’t convince anyone who isn’t already interested in the roguelike genre, but it’s of a high enough quality that if you’re not averse to the fundamental concept, you should have a fun time with it.