The idea of a team that needs to not only work together on a human level, but literally form a construct that’s bigger than themselves is fascinating. The most obvious example is probably Voltron, but even something mechanical like Transformers‘  Constructicons had to form Devastator. It’s a seemingly timeless concept too as nearly all of these tropes have returned, from the new Voltron Netflix series to the Power Rangers film reboot. Quantum Revenge ($2.99) tries to tap into that wizardry in the form of a twin-stick shooter, but doesn’t really hit all of the same notes.

The main draw of Quantum Revenge is its stellar presentation that seeks to re-create an anime/mech feel, which constantly straddles the line of creating something new and relying too heavily on the past. The stellar soundtrack by Goldchimes, which leans quite a bit on electronica helps, but the character designs range from forgettable to “yeah, I can see that actually being in a real anime." It’s kind of the same thing in terms of its engine, as you’ll often look at the background with a sense of wonder before you focus in on some of the less inspired particle effects. Still, for something created from the ground-up for a mobile device it’s impressive all the same. 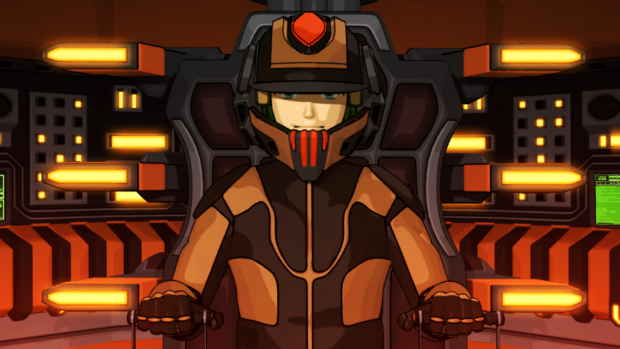 It’s tough to make a twin-stick shooter work on smaller devices, but the team does it. One analog stick handles movement, and the other, weaponry — with a third power-up button thrown in for good measure. The action can get hectic, especially if you’re playing with a handset and not a tablet, but the adaptive sticks do work in your favor more often than not. The freedom of being able to move around a vast amount of screen real estate to dodge enemy fire and return your own is galvanized by the vast expanse of space at your disposal. MFi controller support out of the gate helps a lot, and I wish Apple was pushing the initiative harder, as more and more people don’t even know it’s an option.

For as exciting as it looks, Quantum Revenge‘s main weakness is its inability to provide interesting enemy waves that keep you jazzed up throughout. Its boss encounters are great, as are many of the aforementioned environments, but the Asteroids-style cannon fodder can get old — this is something that greatly benefits from being played in short spurts. While space is freeing in a sense, it also limits the wow factor when jumping from stage to stage. 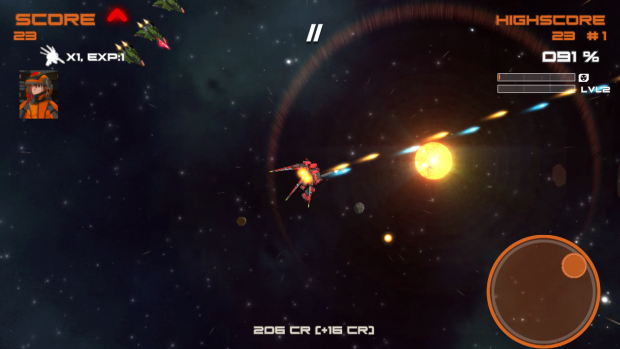 I do like the constant swap between orientations though on-screen. In some instances you’re in an open arena battling it all at all sides. Then during a boss battle the game might change into a vertical shooter momentarily, or force a horizontal skirmish. It’s a cool idea and really highlights the best part of the game — the big end battles. If there were more of those, even if the game was mostly relegated to an arena-like format, it probably would have been easier to constantly return to with that “just one more" feeling.

The good news is that you can do that without having to worry about messy timers or ads, but there is an IAP system for currency.  It’s quite sloppy too, as purchases are in odd increments that are almost meant to confuse you (144,000 for $2.99, 58,500 for $1.99, and 14,000 for $0.99). Credits are used to unlock new mechs (fighters), which range from 25,000 to 100,000, and upgrades, which are in the median range of around 5,000 per piece of equipment. It’s not ideal, but it’s something that can be readily ignored. I went through the entire game without spending anything beyond what I naturally earned, and only did so for the sake of testing.

I can definitely see Realteach VR returning to the world of Quantum Revenge in the future and building on the foundation they’ve already set. Although battling the evil Rokuseya was a blast while it lasted, I’d love to see some of the cast get fleshed out in the sequel, and see some brasher and more bold mech designs. If you’re still the type of person who’s rooting for a Zoids reboot you’ll probably have a great time here, but otherwise you can likely hang on for more updates and improvements — some of which the developer has already acquiesced.