I think you could make a strong argument that Rocketcat Games is the greatest developer in the history of mobile games. No studio has quite the collection of masterpieces that they do. Go on and look it up, their worst title is Five Card Quest ($2.99) and even that isn’t so bad. Madgarden, meanwhile, has the strongest collection of unreleased titles perhaps out there, but when he releases something, it tends to be great. See their previous collaboration Punch Quest (Free), which is still brilliant and so unlike everything else on the App Store. In fact, that’s the problem: these folks make games that are such pinnacles of what they do that nobody else can even come close. So, perhaps you might think Death Road to Canada ($14.99) off the bat seems a bit weird for them to do. After all, it’s a zombie survival game. There’s a ton of them. But that would be short-sighted: Death Road to Canada is another masterpiece from a partnership that keeps cranking out the hits. 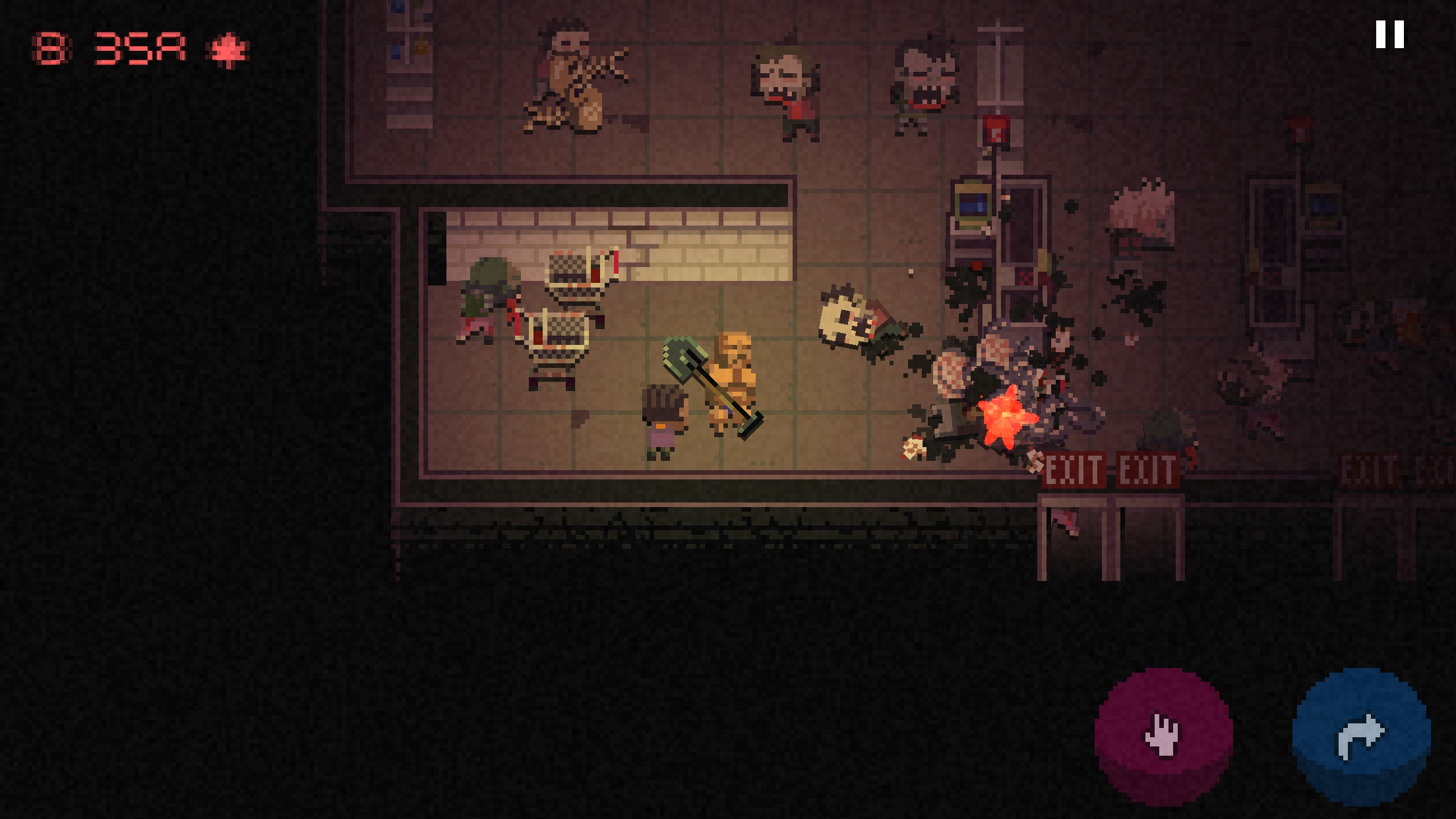 You’ve probably read our coverage before, so you have a rough idea on how the game plays, but it’s an action game where you and an ally travel from Florida to Canada, each day running into various trials and travails, such as your car potentially breaking down, or random encounters on the road that rely on your characters’ stats for responses. Then, you explore different locations, scrounging for supplies while fighting off the undead. You’ll run low on food, fuel, and medkits over time, and having larger groups of survivors means more resources have to be expended to keep everyone alive. Siege missions will force you to test your skill and armaments. Having guns is handy, but ammo is far from unlimited. Melee weapons can break, but even the most durable ones can’t be used without your characters getting tired. Furniture can be pushed into doors to help fend off the undead, but you’ll want to find bottlenecks so you can avoid the massive hordes, as those are the things that will swarm and kill you.

I will say that Death Road to Canada isn’t exactly a mobile game so much as it is a game that works on mobile. This feels like an experience made first for the desktop where players could be expected to play for longer periods of time. This isn’t bad – each day really only takes a few minutes, so you can play for just a few minutes at a time. Also, Rocketcat and Madgarden realized that people on mobile are only going to play for shorter bursts. That’s why the game features fantastic support for just leaving the app and returning to continue your game later. Now, where there’s some confusion is that if you quit from a mission, or at least try to, it will delete your save. But if you just exit the app, it will return to before that mission, with random selections for what your next mission will be. I suppose you could use this to cheat in a certain way to get a better starting mission point, but consider this argument: if you do that, you’re a giant dweeb.

Regardless, Death Road to Canada works quite well as a game that you can sit back on your couch and just play for hours on end. It’s way too easy to get sucked into the game and its twists and turns. There’s the sadness as your original heroes die, then you grow accustomed to your new team, which could be a moody mechanic and the last bodybuilder on earth, who only fights by picking up and throwing things…but he can pick up pretty much anything that can be picked up. You have to expect the unexpected, but there’s a lot to learn. You can develop reasonable expectations of what certain scenarios might provide – rest stops seem to be just rest stops, but sometimes they have supplies-laden rooms. A stop in the city might have various options for getting supplies, too. 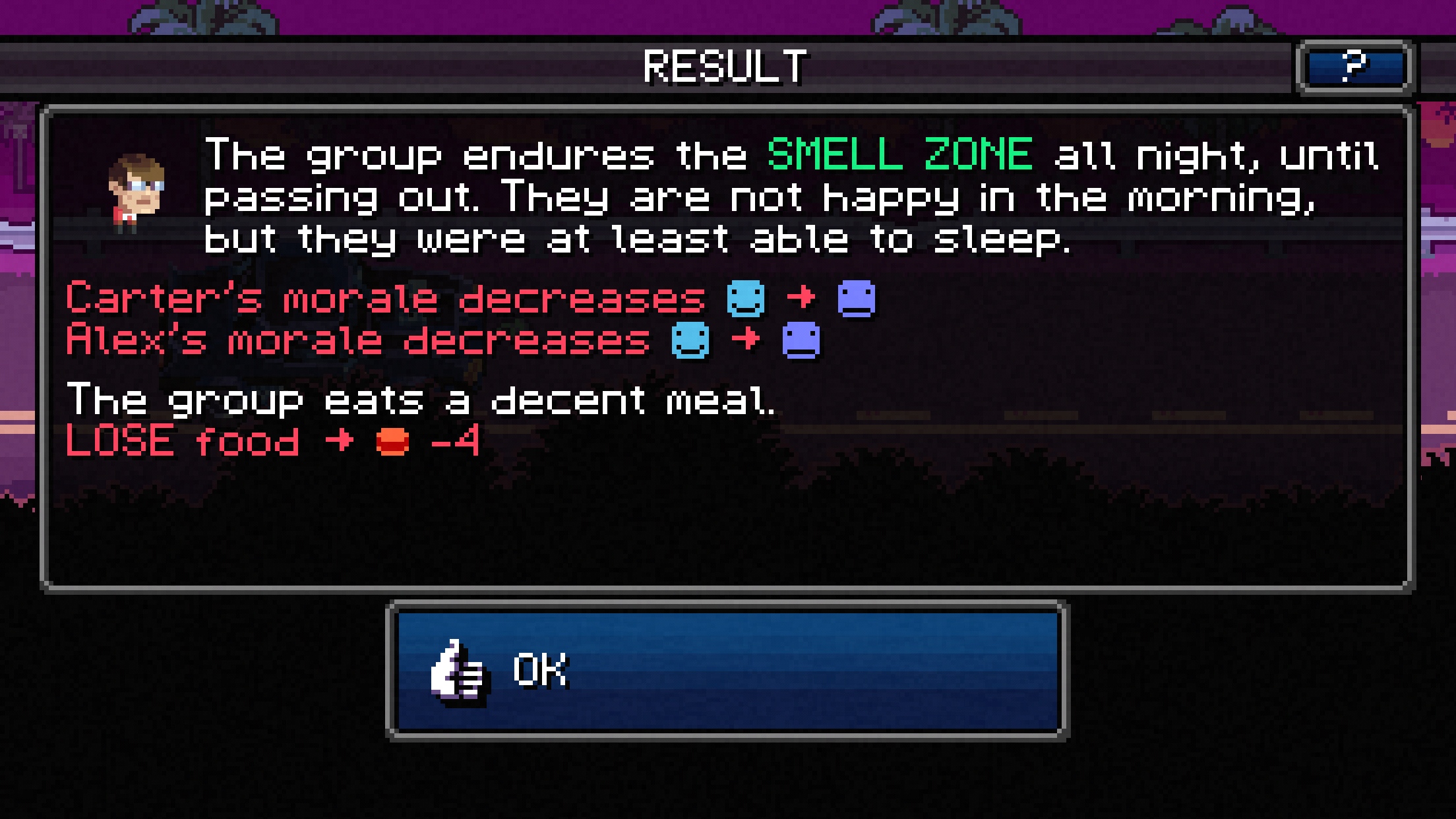 Also, death in Death Road feels a lot like how you probably would die in a zombie scenario: not just from one random zombie attack, but from lots of damage over time, with the killing blow being when you’re overwhelmed by too many zombies at once. That’s how most deaths go, and it’s just about finding ways to survive that scenario, of not finding yourself trapped somewhere when you run out of supplies to deal with the oncoming eternal hordes of the undead. In fact, the entire game just nails that feel of struggle against impossible odds, scrounging for every last resource you can possibly get. There’s that feeling of taking massive risks to try and find just one more bit of food, of finding a medical pack that could keep you alive, or a weapon that could keep you alive for just one more day. Death Road to Canada nails the struggle of trying to survive.

And yet, it also feels like perhaps the purest distillation of the Rocketcat humor yet put into games. The whole thing is absurdity packed on top of further absurdity, with plenty of goofy things that pop up. A lot of this is in the dialogue that happens between missions and even in the random events. Some of it is in the world-building: Y’all-Mart, Just Umbrellas, and other store names. That, and the other characters in the game, who all have something ridiculous about them. There is no normalcy in Death Road to Canada except the utter lack of normalcy. I do like that the game has all these especially weird things like special characters, and the game isn’t afraid to give you the option to experience them for yourself. Familiar Characters mode lets you see more of your custom characters in your game. Special Characters mode might make the game a bit easier by giving you the occasional unstoppable demigod that you come across, but it’s all in the name of fun. Challenge-seekers can beat the game and try out the harder modes for themselves. The shorter mode is a blessing once you unlock that, as well.

Death Road to Canada passes the ultimate test for me: is it possible to fall into a deep trance with the game, where all I’m doing is playing it and not caring about anything else in the world? The best titles do that to me. Rocketcat’s games have done an exceptional job at casting that particular spell. Every time I pick up Death Road to Canada, I wind up suckered into a situation where I sink hours and hours into this one and the staff at Starbucks is yelling at me to get out, the gold card doesn’t mean I can stay late and it’s 1am anyway, why aren’t you at home? I have my reasons, and they are that I have to get this motley crew of Jared (Eli died), this demigod fencer, and some dude wearing a horse mask to Canada in one piece.

What I’m saying is that you have to play Death Road to Canada. Controller support is the one thing that would make this better, and that’s coming shortly after this review.