For all of the interesting themes that can be found in the published works of Choice of Games, one of the more common ones is that of war. I suppose that’s no different from a lot of forms of entertainment, but it does start to feel like I’m re-living Disney’s Mulan over and over again. Somehow a plucky (and usually lowly) hero manages to upset the certainly-evil invading bad guys almost entirely on their own, and usually gets a smooch or two along the way before being declared the best person that ever was. Yes, I’m over-simplifying, but it’s only because this premise is starting to get a little weary. I had hoped Runt of the Litter ($3.99) would put a new spin on the theme, with its central conceit being that you need to raise and train a war gryphon. Indeed, it does play out differently than I would have guessed, but it’s hard to say if that’s for the better or the worse. 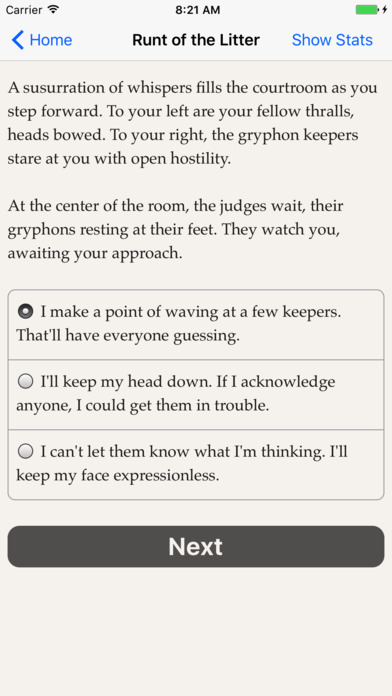 Anyway, the set-up. You play as a thrall in an empire entrenched in long-term war with another country. We don’t learn much about them, except for the fact that they ride wyrms and are probably evil. Our team on the other hand rides gryphons, and are probably also evil if we’re being completely honest about it all. But those other guys like to burn down villages, that much we know for sure, so let’s just focus on their villainy for now. In our fine and just empire, there is a strict class system. At the top are the gryphon riders, the sexy and cool champions of all that is right. They deliver hot justice and witty punchlines from the backs of their impossibly fluffy cat-bird steeds. You are not a rider. Instead, you belong to the other class, whose members serve essentially as slaves to the empire. One wrong move and you’ll be sent to the front lines of the war, presumably to be converted to hamburger at the nearest opportunity.

You’re just doing your business one day when you happen to come into possession of a rejected gryphon egg. It’s just about to hatch, and if you don’t take care of it, the little gryphon will be put to its death for the crime of being a runt. Even though it’s punishable by death, you decide to hide the hatchling and take care of it. You’ll have some help from friends on both sides of the class divide, but you’ll need to watch out for some less charitable acquaintances who would cause a lot of trouble for you if they found out your secret. This early part of the game where you’re training your gryphon in secret, running around with your friends behind the backs of the authorities, has an entertaining Harry Potter-like feel to it. Of course, the secret inevitably comes out, and you end up having to prove both your worth and that of your gryphon.

Unfortunately, this is where Runt of the Litter starts to come up short. What is supposed to be an arduous, incredible journey is virtually glossed over. It feels like the story is in a rush to get to its third act. Which would be fine, except there is no third act. The ending comes abruptly, and an epilogue hits the main points of things that would have been really fun to play. No climactic final battle against a wyrm rider, no startling revelations, nothing. It feels very much like the story just gives up and goes home after the gryphon isn’t small, fluffy, and cute anymore. The romance options feel equally rushed, with the characters telling far more than they ever bother to show. It’s completely lacking in satisfaction all-around. 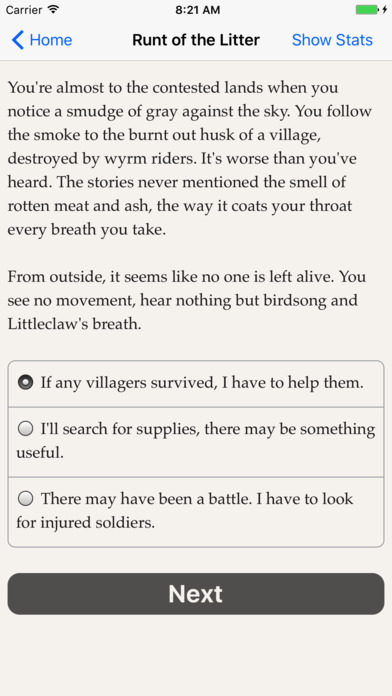 This pruned plot is made all the more frustrating by the fact that the prose itself is excellent. Kelly Sandoval does an excellent job of bringing the gryphons to life with evocative descriptions of their mannerisms and fantastic capabilities. Individual characters don’t get a lot of time to shine in the brisk plot, but the most is made of each encounter. While I would have preferred to see more things fleshed out concerning the motivations of certain characters and groups, I was able to get a great sense of the setting from the text. What is here is really quite good, but that only makes its abbreviated nature more disappointing.

I do have to give the game some credit for having a fairly substantial branch in the middle. Most gamebooks will have choices lead to somewhat similar results to keep things simpler, but a good-sized section of Runt of the Litter will be almost completely different based on one of your choices. There are also the more expected major differences in the endings that show up based on who you threw your lot in with and where your stats are at in the end. There isn’t much of a trick to finding all of the branches, as almost every choice is pretty clear about which direction it sends you in. As such, while you might want to replay it a couple of times to see most of what there is to see, there isn’t a whole lot of challenge involved with that process. That could be a good or bad thing, depending on your tastes.

Runt of the Litter makes a good impression while it lasts, but the overall experience feels like it’s missing some essential nutrients. It’s almost like I can see the lore that I’m craving sitting over on the counter, but it’s just out of my reach. The pace of the story starts moving a little too quickly for my tastes in the back half, and it truly feels like there should have been something more after the game’s second act. It’s a pleasant enough read and just about everything involving the gryphons is a joy, but it’s hard to give this one a strong recommendation when it feels like it’s lacking so much.