Tinytouchtales and artist Mexer reunite to make Card Thief (Free), a solitaire card game that is a follow-up to Card Crawl (Free). Instead of being a dungeon crawler, this is about stealth, with a card system. You move your thief card around the board in any direction, dealing with traps, enemies, torches, and items that pop up. Your objective is to clear out cards to get through the deck, eventually picking up the treasure chest that gets on the board, and escaping when you’ve gotten through the deck. While there’s actually an unlimited number of cards, the deck has certain milestones that pop up throughout your session. The thing is that where Card Crawl definitely added in some new elements after launch that added some depth and complexities to the experience, it’s a much simpler game than what Card Thief is conceptually. For example, I went back to Card Crawl after a long time not playing (I have too many games on my phone…and iPad), and after a little bit of reacquainting myself, the game made sense. On the other hand, Card Thief off the bat is a more esoteric experience. It has its own rules, and a number of systems and card types that all interact with each other in ways that you probably won’t understand right away. In fact, it plays fast and loose with the whole ‘cards’ concept to begin with. It could have just been a stealth action game without the card concept, I imagine. But the thing I found is that after a few sessions of not knowing what I was doing, the more I played, the more Card Thief clicked with me. And when it clicks, it’s an amazing game. 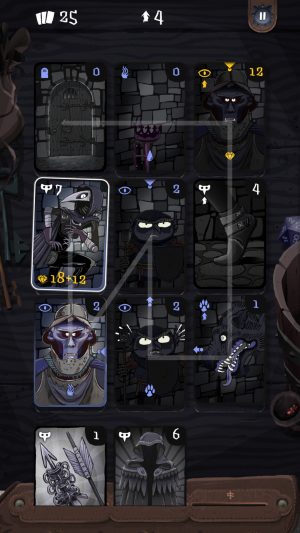 Card Thief offers up a tutorial, which teaches you the basic elements of the game separately, but it really requires you sitting down and playing a few sessions of the game in order for it to all click. This is because all these systems work together in a complex way. You have stealth points, and these are used to undertake certain actions while also serving as health. Get detected by an enemy when you have 0 or fewer stealth points, and it’s game over. But, you can swap positions with enemies without killing them, and still do things like put out torches without any stealth points. And yes, lighting plays a role as to whether you’re seen, and if an enemy can see you. And then the enemy cards and traps have their own rules that they play by, that also interact with light and stealth points. Why do some cards suddenly get very high values with stealth points in a turn? Well, it has to do with how violating the rules of stealth, like drawing an enemy’s attention, makes cards attain higher values. But, this can also be used to your advantage, as it’s possible to stealth-kill some enemies without using stealth points, but you have to play your cards just right. Literally.

This is all very confusing to explain, and it takes a while to understand. What happens after a while is that you’ll get a grasp on the systems – or at least enough of them will coalesce in your brain to the point that the game suddenly makes sense. This moment is spectacular, because this is when Card Thief becomes fun. The first few play sessions, I wasn’t so sure, but it helped out a lot to get my first wins, and to start seeing the patterns in how my actions affected the game board, seeing that they aren’t random. The game makes sense, it just takes a few times. The good news is that Card Thief is built around play sessions being only 2-3 minutes, so it’s easy to get a round in whenever you feel like it. I will say that the game doesn’t really give you much in the way of equipment early on, and it helps out a lot to start enabling them so that you can get a leg up on your opponents. 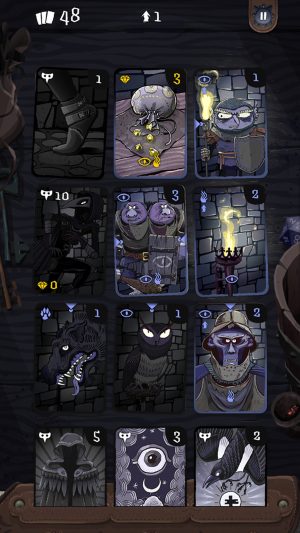 One of the more satisfying things in Card Thief is when you play all the cards on the board, because this refills your stealth points. Granted, you’re given a brand new situation, and it might be more lucrative to make a path that doesn’t get rid of all 9 cards, such as if you can pull off a stealth kill. This is part of the learning curve: once you figure out how valuable a clear board can be, you now have to learn how valuable not clearing the board can be. And hey, if you can learn how to use enemy traits, such as drawing their attention elsewhere (with or without equipment), or drawing them to stare in a spot where you can pull off a stealth kill, well, more power to you. A lot of these aspects you have to learn for yourself, but they become apparent just through playing. The game also helpfully gives you indicators as to when you’re making a move that will end your game. These can be confused with the warnings that you’re at zero or fewer stealth points, which aren’t game over, but you are living on the edge.

The chest system has both a short-term and long-term aspect to it. See, the value of stealth points that you need to spend to pick up a chest increases over time, but this also increases the value of the chest. The more valuable, the more likely it is to contain insignias that can be used to buy new cards and unlock future levels. However, the harder it is to pick it up, the more likely that you’ll run out of stealth points. As such, you want to manipulate the board and ration your items well, so that if you use the cloak which gives you additional stealth points, that you get the hiding spot near the end of the game, and can use the cloak to help pick up a sizable chest. The number of insignias in a chest is random, but bigger number means higher chance at getting 3 insignias. What this means is that not only is it worth going for a bigger chest in terms of getting a high score, as they’re based on gems collected and chest value, but also because it can help you advance through the game more quickly. 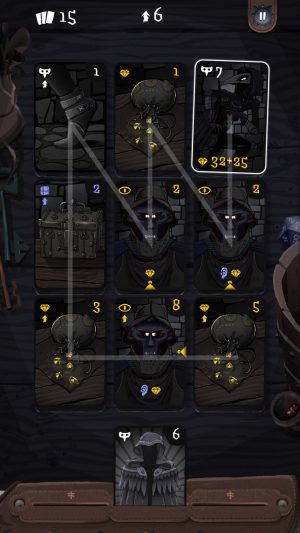 And I like that there are four different modes to play through. The first level lets you go from knowing nothing to understanding the basics. Then, later levels start to throw new tricks at you that will affect your strategies. These later levels are harder, but do come with new equipment rewards, along with their own high score leaderboards. That progression element is crucial to the replay value. There’s also card upgrades that have to be earned through specific achievements. These can even help you learn how the game is played. Want to figure out how to win with negative stealth points? Well, there’s an upgrade fairly early on that requires you finish with -3 or less, so good luck with that!

But that’s the thing that I think Card Thief really nails. It gives you a concept that can be a bit tough to pick up on at first, but it’s accessible enough for you to play it and learn how to succeed. The game is constantly going through a process of challenging you with something alien, and letting you figure it out for yourself. It’s so satisfying, because the game does teach you what you need to know, but it also lets you learn for yourself how the whole thing works. And because game sessions are so brief by design, it means that the path to enlightenment is a short enough one. You’ll still have to play for yourself and learn how everything works. My first few sessions with Card Thief were not my favorite, and that’s kind of a problem for a mobile game, but this became a lot of fun once it clicked on the fifth or sixth session.

And that’s what I have to recommend with Card Thief, is that you stick with it. This is a game that becomes a real battery-killer if you give it a shot. Also, because on my (shockingly old!) iPhone 6 Plus, the game drains battery quickly. It might not click right away, but it will click eventually, and there’s so much of a rewarding experience here, with new content to unlock. I do wish there was iCloud, so that I could keep my progress going on my iPad and maybe not kill my battery so fast. However you play it, this is a must-play, and a game I don’t see leaving my iPhone any time soon. Just be patient.