Mike Donais, Hearthstone‘s (Free) Principle Game Designer, has revealed some very interesting cards from the upcoming Journey to Un’Goro expansion today. His reveals focused on the new tribe, Elementals. As was to be expected, Elemental cards have plenty of synergy between them, which in terms of lore is explained as latent energy left behind when Elemental cards appear. Interestingly, many of the Elemental cards get bonuses from cards played in the previous turn rather than on the same turn. The first card revealed is the 7-mana 4/4 Shaman Stone Sentinel, which has a battlecry “if you played an Elemental last turn, summon two 2/3 Elementals with Taunt." There’s also Ozruk, the 9-cost 5/5 neutral Legendary with Taunt that gains +5 health for each Elemental played last turn, and three other low-cost cards that aim to push players to make Elemental decks. 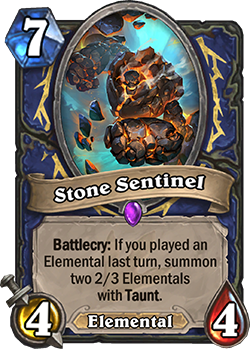 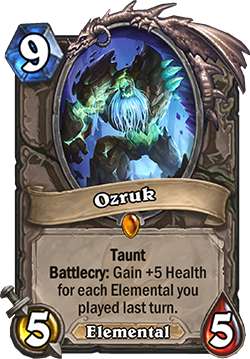 Donais also talked about the designs that didn’t make the cut—like Elementals getting a bonus if you cast a spell or if you control another Elemental—but each one of those ideas had too many issues. The developers like the Elemental synergies, because you get rewarded for planning turns in advance, and feel that these new cards should fit nicely in control decks.

There’s also a long list of current cards that have now become Elementals—including Lightspawn, Ice Rager, and Magma Rager. All in all, there are about 25 new Elementals in Un’Goro, and there will be primarily Shaman, Mage, and neutral cards. You can see all the new cards here. Now I’m curious to see how Elementals vs Jade Golems play out.