Did you guys know that they’re making a movie about the Rampage video game franchise starring Dwayne ‘The Rock’ Johnson!? I am super pumped for that. Shame it shares a title with an Uwe Boll franchise. I learned this piece of recent news researching for the game in this review. I grew up playing the Playstation/N64 Rampage games, World Tour and Universal Tour. I loved them as a kid and am rocking some rose-tinted glasses as far as they’re concerned. It’s been over a decade since we’ve had a proper Rampage entry, and that realization fills me with sadness, but there have been several mobile games inspired by Rampage specifically or kaiju city destruction in general. MonstroCity: Rampage! (Free) decided to put it as the freaking subtitle. 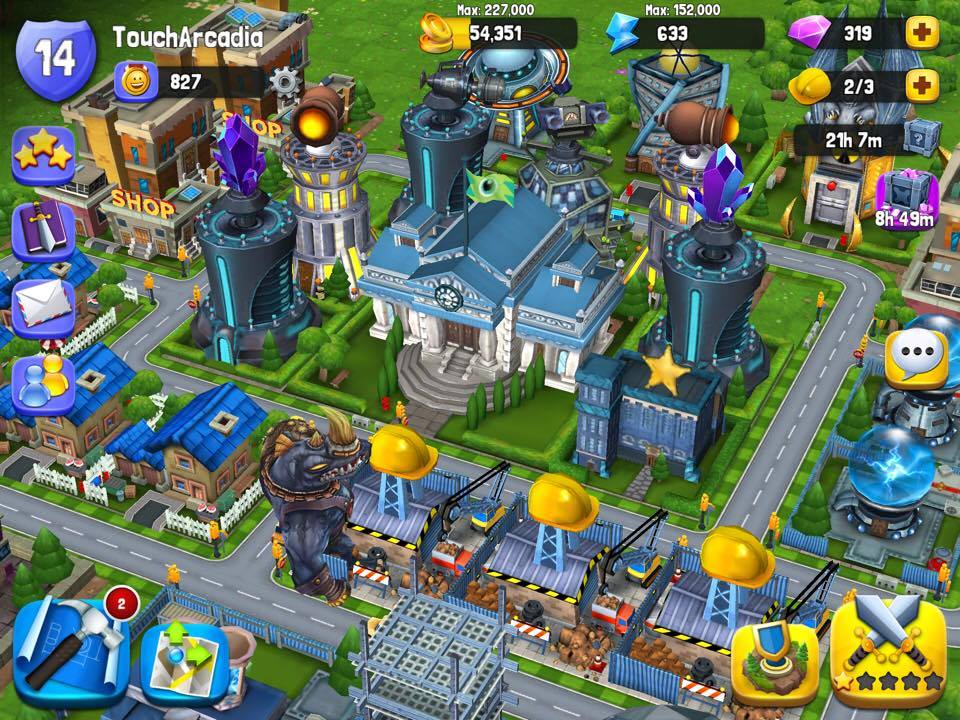 Alpha Dog Games helmed this punny titled endeavor. They’re also responsible for Wraithborne (Free), a very cool old mobile Action RPG dungeon crawler. It had some problems but I had a lot of fun with it back when it released. This game likewise has some issues, but I’ve enjoyed it quite a bit. It’s right up there with Roar Rampage ($0.99) as far as mobile kaiju love letters go. This is basically Clash of Clans (Free) meets Rampage, as you build your own city and defenses while attacking literal clones of yourself with giant monsters. For real, the conceit is that you and your assistant have been cloned infinitely. It says so right in the game.

The most important part, the monsters themselves, are on the whole really awesome. From giant ape Furious George, to Max Horn the swole Rhino, all the way up to Mecha Bob-Zilla. We’ve got a giant tanky tortoise with a flame thrower coming out of its shell, a super powerful but fragile dragon, a giant venus fly-trap Piranha-Pete looking dude, giant spider that can web up turrets named Charlotte, a literal alien in a huge flying saucer, and a bunch of zombies called The Walking Dudes whose power is to keep coming back from the dead as long as one of them is still alive. The monster designs are very creative and cool looking, even if they wear their inspiration on their sleeves. 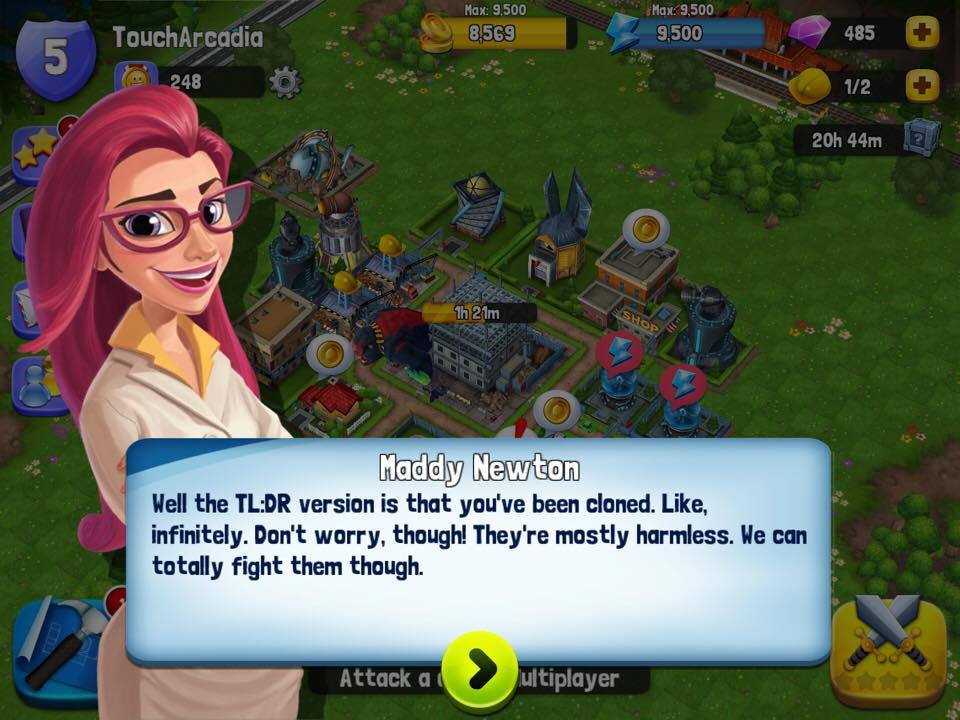 Monsters come in ground types and flying types, with either melee or ranged attacks. They also each have a special active ability you can use which cost adrenaline. You’ll start every city attack with some adrenaline and get more for each building you destroy. Some abilities, like Crispin the dragon’s Flame Strike, are super high damage single target destroyers, but cost a lot. Furious George and Dinky Kong with their leap attacks and Max Horn with his charge cost much less. It’s honestly a better idea to factor abilities into your build more than monster type. While certain defenses can only target air or ground monsters, a monster like Crispin can nuke any anti-air turrets from outside their range with ease. But if you bring a lot of high cost ability monsters, you won’t be using as many attacks and lose a lot of control over the battle.

Like in Clash of Clans and so many other games in this freemium city attack/defense genre, you can’t control what your monsters attack. They’ll go for the nearest building. This means that if they’re right by a couple of turrets that are just draining their health, they’ll go for the apartment building that is slightly closer. You can direct certain monsters with their abilities and others will bypass buildings if you use their ability on a specific target, like Crispin and The Walking Dudes. But most will continue attacking what is right in front of them. Besides turrets, you’ll deal with cops roaming the streets and shooting your monsters from their cars. Destroy the police station to stop them from spawning, but the only way to kill a spawned cop is with an ability. Believe me when I say even one cop can totally ruin your monsters if they’re stuck unable to fight back or escape. 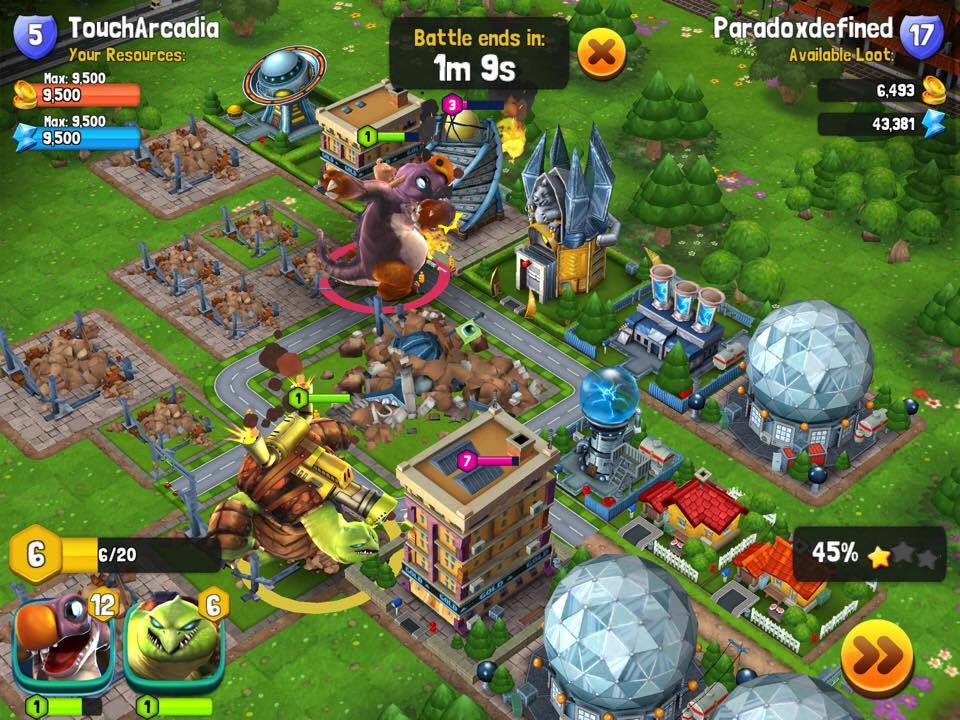 You only need to destroy the City Hall for a win, with star ratings based on how much of the city you destroy. The only way to get 3 stars is with 100% destruction. You get resources like money and energy from destroying buildings as well. And you are actually taking resources from the enemy. I was very confused about a few set ups I’ve seen with City Hall out in the open with every other building in the corner protected by turrets, but that’s why. After a certain point, saving up resources becomes time consuming. Some players would rather hand you the win and lose as little as possible.

Money is primarily used to build defenses and energy creating buildings, while energy is used primarily on your monsters, monster related buildings, and money creating buildings. You can only take each monster out a specified number of times before they get tired and need to “recharge” and it doesn’t happen automatically. You need to spend energy to recharge them. And you can only recharge one at a time. And you can only slot up to 5 to recharge at a time. This is one of my big gripes. Instead of auto-recharging their energy through rest, you must pay. Fine. But limiting the slots and only charging one at a time is excessive. If you remove a monster from the current recharge slot for whatever reason, you’ll get a refund but they’ll lose all progress, so don’t do that. 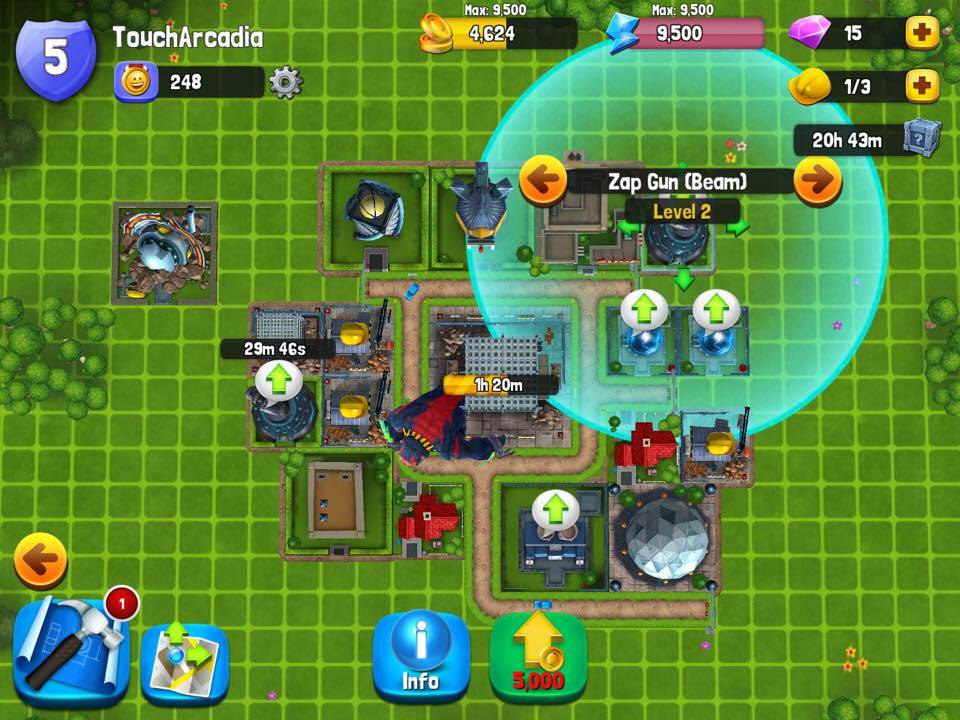 You also get DNA from attacking the enemy’s DNA Lab and Monster Lab, plus in various reward crates. DNA is used in the DNA Lab to create mutagens, which spawn new monsters and are used to evolve your current monsters, upping their stats. Evolved monsters also get a refresh of energy, so plan around that. A few levels make a huge difference. DNA Lab upgrades give you access to rarer DNA, while Monster Lab upgrades let you take more monsters into battle and give higher starting adrenaline. You get a free crate each day, plus you can work your way up to a daily Star Crate by collecting stars. You also get Rampage Crates for having a win streak at certain intervals. Brand new monsters are supercharged by the way, meaning unlimited energy for a brief period, so make use of them.

The primary currency are Gems, as is the law. You use gems to build extra construction crews to have more upgrade timers counting down at once, which are always the most valuable and expensive thing in these games. You also use gems to quickly finish any building or monster recharge. You can earn the 3rd construction crew easily enough, but 4 will take forever and 5 is nearly impossible without buying gems. Early on, when your banks and power storage are low, you’ll always be maxed out on currencies, but as soon as you cross the 200k or so mark it reverses and you never seem to have enough. 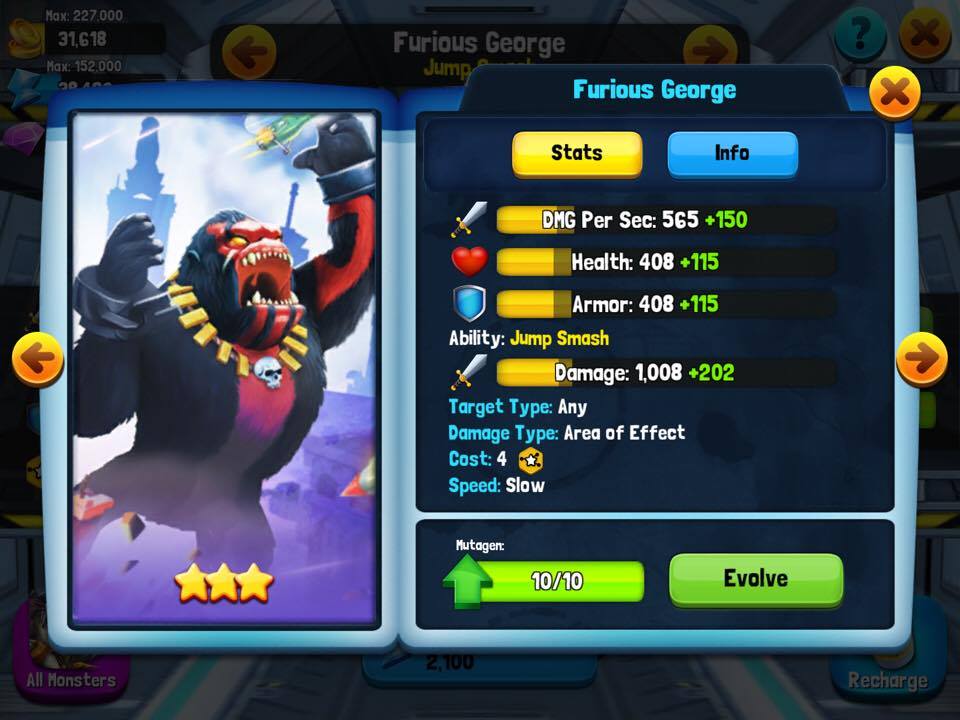 There are plenty of fun social features. Your user-name and town-name are one and the same. Any time you’re attacked you can watch a replay to analyze your defenses, or go on a revenge attack. You can go to the leaderboards and look at any player’s town at any time to see what high level content looks like. After a certain level, you can rebuild your Syndicate Lab to join a Syndicate, which is basically a guild, and participate in Syndicate Wars. These consist of 2 days: a preparation day in which you donate DNA to build an extra free war monster to use in the second day, where you attack the other guilds towns. The Team with the most stars at the end wins. In normal match-making, you have no idea what the enemy town will be like and can’t plan your monsters accordingly, but you can scout any enemy town in a syndicate war before attacking, adding a layer of actual strategy. TouchArcadia currently pledges allegiance to syndicate Kaiju Crazy, under the noble leadership of Tacoland.

A lot of new players don’t understand basic stuff like covering your turrets with other turrets, especially of opposite types, but some have deceptively fortified cities that will ruin your day. All in all, it’s a lot of fun. I wish the monster energy worked differently, but otherwise it’s the same kind of timer based freemium stuff you’re either OK with or you’re not at this point. There are some visual bugs that are annoying, like not displaying the amount something costs, or always showing you a “new” upgrade to a building every single time you log in. Minor stuff, mostly, just annoying. Re-organizing your town as it grows can be very satisfying. If it sounds like you’d enjoy this game, you probably will.