I’ve been down the road a couple of times before with games from developer Ian MacLarty, and I feel like I know at least a few things to expect from his work. First, my poor pride is going to take a serious beating. Second, I’m going to keep on playing anyway. That was true for Boson X ($2.99) and Black Hole Joyrider (Free), and it’s true again for Jelly Juggle (Free). This one has a cuter, softer, kid-friendlier look to it than MacLarty’s last couple of iOS games, but don’t be fooled. That smiling, goggle-eyed fish wants only one thing in this world, and that’s to make you cry. You might not feel like you need another ultra-tough, one-touch game on your device, but if you’ve ever enjoyed that sort of thing, I certainly encourage you to give this quirky Pong take-off a try. 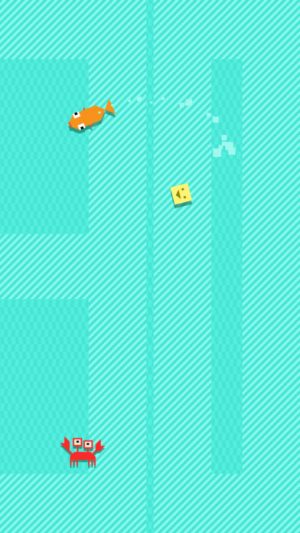 So, here’s the set-up. You’re a fish. You swim in circles. Only forwards, mind you. That’s the kind of fish you are. There are one or more jellies that fly across the screen. If they touch the edge of the screen, you’re out. If you hit the jelly with your fish body, it will bounce off in another direction, towards another screen edge that will give you a game over. You’re going to want to hurry along and hit it again. If more than one jelly is on the screen, you should probably keep an eye on where all of them are at any given moment. Reach a certain score on each stage and you’ll earn some stars, which are used to unlock new stages with different jellies. Each stage’s jellies behave a little differently from the last, offering up a surprising amount of variety for such a simple game. Getting the scores that earn you those stars is pretty tough, to put it lightly.

As with MacLarty’s last game, all you have to do to be an expert player at Jelly Juggle is to learn when to have your finger on the screen and when to take it off. Easy-peasy. Touch the screen, and your fish moves counter-clockwise along a circular track. Take your finger off, and it stops. Well, not on a dime, as your fish has a little momentum to its movement, so you have to take that into account. And although any nudge from your fish’s body will be sufficient to send the jelly flying, the part of the fish it hits will determine the speed and direction it moves in. Hit the jelly at the wrong angle and you’ll pretty much have to keep your finger down to have any hope of reaching it in time on the other side of the circle. It takes a little while to get the hang of it, but once you do, you’ll be smacking that jelly around in just the way you want to. 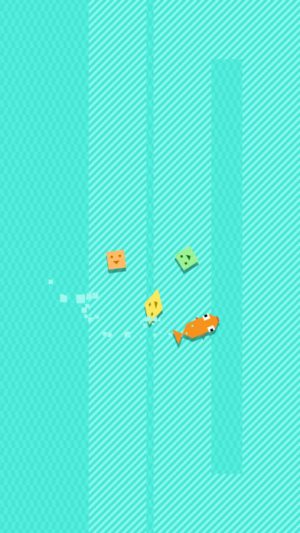 Or at least, that’s what will happen on the first stage. The Lemon Jelly on that stage is all by itself, and it moves in fairly predictable patterns when you hit it. But each stage will throw different types and combinations of jellies at you, forcing you to re-learn the rules all over again. For example, the Strawberry Jelly stage throws two smaller, faster jellies into the mix, and you can’t let either of them get past you. If you’ve ever taken care of a couple of toddlers, each running towards something fragile or dangerous in opposite corners of the room, it’s kind of like that. But the jellies don’t just differ in speed and quantity. The Bubblegum Jelly stage seems normal enough at first, but if you put some spin on the jelly, you’ll find it moves in a very different way.

Of course, before too long, the game starts to play mix and match with these jellies. This is where it gets kind of clever. It’s no longer enough to get by on reflexes and a bit of luck, as if you bounce the jellies carelessly, you’ll have no chance of keeping them all in play. You have to start aiming your shots, which means controlling very carefully which part of your fish hits which jelly and when. This is ridiculously difficult given how little time you have to react, naturally, but it’s also a lot of fun to try. If you’ve stayed with the game long enough to actually unlock these advanced stages, you’re probably as ready for them as you’re going to be.

Jelly Juggle is free with ad support, with four stages available for you to unlock and play free of charge. The game contains a single $1.99 IAP that removes the ads and adds another six stages to the game. You still have to unlock them by earning stars, of course, but the first one will be open by default. Apart from that, there are no other IAPs to worry about. Ten stages might not seem like a lot, but just as in Boson X, each of the stages is quite a long chew. The game features Game Center support for leaderboards, which I imagine will be a good source of fun over the long run after the unlocking business is taken care of.

While Jelly Juggle is probably a bit more demanding of a game than most people would like, it shares a certain zen-like quality with other ultra-hard games of this sort. Getting into the groove of bouncing the jellies back and forth, trying not to get distracted by any new scenery that happens to pop up along the way, and hearing that satisfying sound of the jelly bouncing off of your fish’s hide is a beautiful kind of aggravation. If you enjoyed games like Super Hexagon ($2.99) or MacLarty’s own Black Hole Joyrider, you’ll probably have fun tapping on the glass of this aquarium for a while.