Dungeon Rushers ($3.99) makes a really strong first impression, and if I had only played the first hour or so of the game, I might have been inclined to give it more praise. Depending on how you want to look at it, it’s either a simplified dungeon crawler or a more complex take on Dungelot ($0.99). You start off with one character and slowly assemble a group of 10 adventurers, 5 of which can be in your party at any given time. Your team will make their way through grid-based dungeons, revealing one square at a time and dealing with whatever may appear. The battles take place on a separate screen and use a simplified turn-based RPG system. With a quick pace and a fair amount of strategic options, it’s pretty fun at first. It’s a longer game than you might expect, however, and by the end it’s far more stick than carrot.

In total, there are more than 60 pre-built dungeons to plumb your way through, with multiple difficulty settings available for each. If that’s not enough, there are also eight mansions that each feature multiple floors of procedurally-generated content. And if that’s not enough, there’s also a fairly entertaining PVP mode where players can challenge one another’s custom-built dungeons. In total, it took me a little over 15 hours to get through everything, a rather impressive length for a game like this. Unfortunately, I got somewhat tired of the game halfway through. There are a couple of reasons for that. 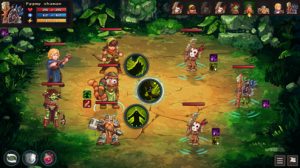 First, the gameplay doesn’t throw enough new tricks in as you go, making it feel like you’re doing the same things at the tenth hour that you were doing at the third. The new characters you recruit along the way add some spice into the mix, as each of them brings their own unique skills and abilities into your party. When you find someone new, there’s a rush of excitement as you see how they might fit into your party strategy. Unfortunately, the excitement is fleeting. Since characters only have a few skills each, you’ll soon fall into a familiar rhythm no matter who you’re using. Adding to the problem is that there simply isn’t enough variety in the enemy’s behavior. It doesn’t take a lot of work to find a good strategy, and whether or not it works typically depends on how experienced your party is compared to the enemies.

Which leads into the second reason why the game started to wear on me long before it finished. The pace at which both your characters develop and new equipment is made available is a little bit off of that of the increasing difficulty. There are points where you’re going to have to stop dead in your tracks and go back to earlier levels to grind. It’s not a quick process, either. Earning a single level takes a lot longer than it ideally should, making it feel like you’re spending a lot of time and not really getting anywhere. Useful new equipment is hard to come by, too. You’re meant to be crafting a lot of it, but it nevertheless comes out at a trickle. Even in cases where I had felt I had gathered up the best stuff available to me at any given moment, it never left me feeling powerful so much as it felt like meeting the minimum check for moving on. 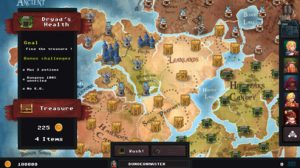 Now, there’s a very real chance these things won’t bother you. Everyone has their own tolerance level towards grinding, and if you see this more as a game you fire up now and then to run a dungeon or two without putting a large focus on forward progress, you’re likely going to have a better time with Dungeon Rushers. The pre-built levels can get awfully tiresome to replay, but the mansions at least provide some variety each time you jump in. Taken as a series of bite-sized sessions as opposed to something to really sink yourself into, Dungeon Rushers fares far better. The story is silly enough to entertain you without requiring you to pay much attention over the long haul, the controls are easy to use, and stomping around a map looking for some loot and skulls to bash in can be quite enjoyable. Enjoy it in the moment and it’s easier to forgive how slowly real progress in the game is made.

It’s too bad, though, because there are a lot of things here that would work nicely towards a more engaging experience. Each character has quite a few equipment slots, the crafting system is surprisingly robust, and the individuality of each unit’s set of abilities makes for entertaining possibilities in battle. These aspects certainly point to something special for those seeking a more complex game. And the game does make a valiant effort at a continuous, if completely tongue-in-cheek, narrative. Some might find it a little too jokey for its own good, but I welcomed even the jokes that didn’t land if only to provide some much-needed stimulation during an arduous campaign.

Dungeon Rushers also enjoys a nice presentation. The pixel art is of good quality, and the audio does its job in backing up the fantasy atmosphere. The UI is fairly straightforward, though in places it feels like it’s slightly cramped on an iPhone. Constructing levels is easy enough to do, and if you get into that part of the game, you’ll certainly have a lot of extra enjoyment on your hands. The game offers a decent tutorial, but there are some useful things it won’t bother telling you about, so make sure you poke and drag around a bit. Speaking of the visuals, this is where you’ll find the game’s only IAP offerings. Each character has an alternate skin that is purely cosmetic. You can buy these individually for $0.99 or in a complete pack for $5.99. Other than that minor indulgence, the game is purely an upfront purchase.

While Dungeon Rushers offers a lot of fun for at least a few hours, some balance issues see it turn into something of a party guest that just doesn’t know when to go home. Even when it hits that point, it’s not as though it becomes actively unpleasant. It’s just a bit wearisome and out of new topics. If you don’t mind the idea of making slow progress through a game through a ton of shorter sessions, you’ll probably have a blast with Dungeon Rushers. In that sense, it’s probably better on mobile than it was as a PC game, but I feel like the game could have satisfied both types of experiences if the pace were only a little bit quicker.