Ever since prolific gamebook developer Tin Man Games acquired the Fighting Fantasy license a few years back, there were a couple of releases many fans were waiting for. Tin Man has done a wonderful job of choosing books to adapt from the well-known line, but the more they released, the more a couple of titles really stood out by their absence. Well, I don’t know when we’ll see Deathtrap Dungeon, but if it turns out anything like The Warlock of Firetop Mountain ($7.99) has, I’m willing to wait as long as it takes. 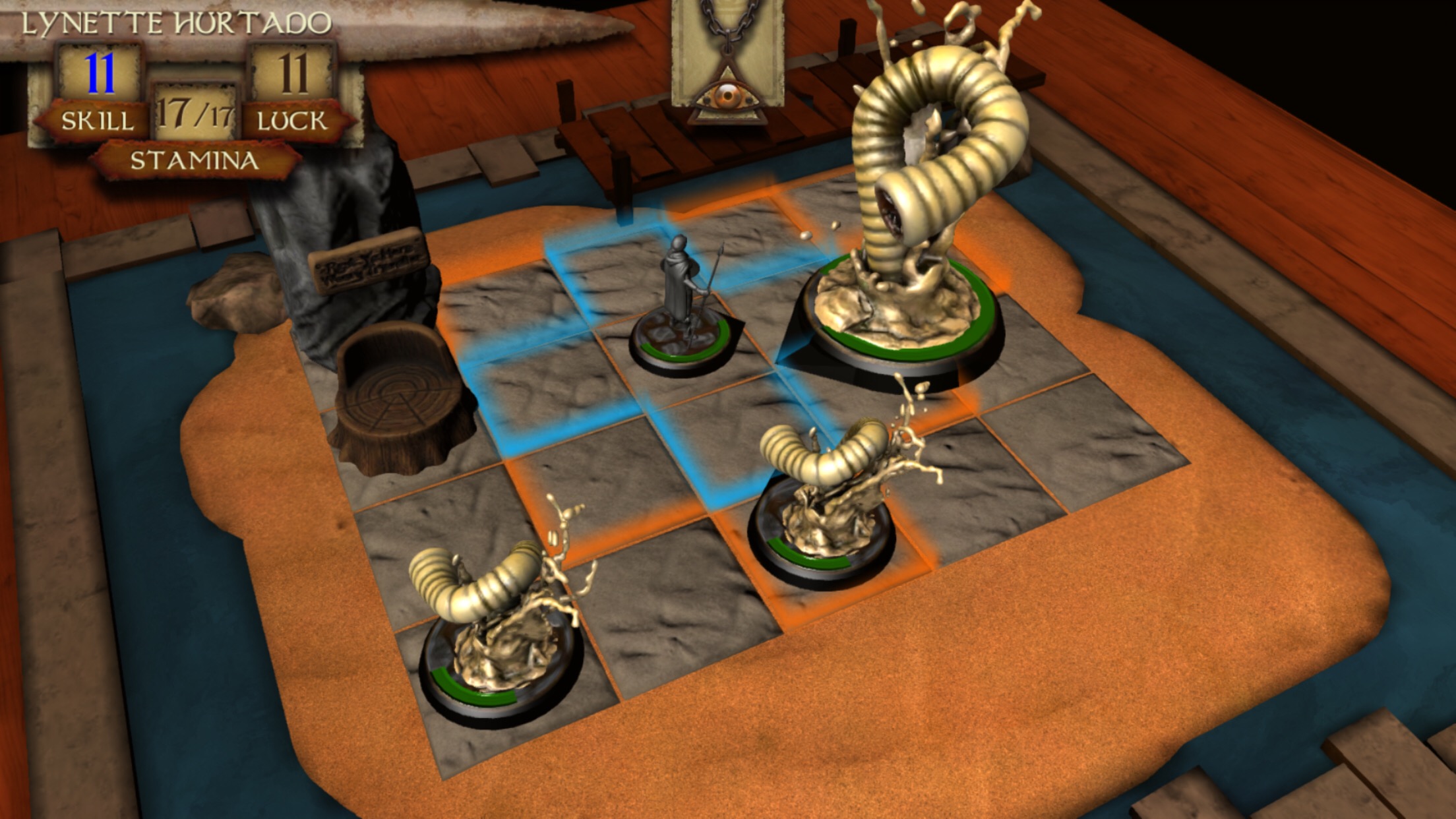 The Warlock of Firetop Mountain was the very first Fighting Fantasy book, released in 1982 by Puffin Books. One of the few true collaborations between Games Workshop co-founders Ian Livingstone and Steve Jackson, Warlock‘s blend of fantasy prose, puzzles, and tense dice-based combat proved to be a tremendous success. It spawned a series of more than 50 books and jump-started a trend for gamebooks that would persist until the Game Boy and Tetris ripped the still-beating heart out of its chest. As the first and likely most famous of the Fighting Fantasy line, Warlock has seen a number of video game adaptations over the years. Oddly, very few of them played the conversion straight. The first was an overhead action-adventure game. Another was a first-person action-RPG in the vein of Hexen.

With the rise of mobile gaming, gamebooks got a new lease on life. In the early years of iOS, publisher Big Blue Bubble released a fairly straightforward version of the book on the platform, along with a handful of other Fighting Fantasy adventures. Meanwhile, gamebook newcomer Tin Man Games was making a splash with their own line of Gamebook Adventures. When the Fighting Fantasy license moved to Tin Man, the Big Blue Bubble versions were de-listed. Still, Tin Man did such nice work that not many people minded the idea of buying classics like Warlock all over again. The new license-holder obviously initially tried to keep away from the titles that had already been released by the previous publisher, likely intending to leave a healthy buffer of time before re-introducing them. 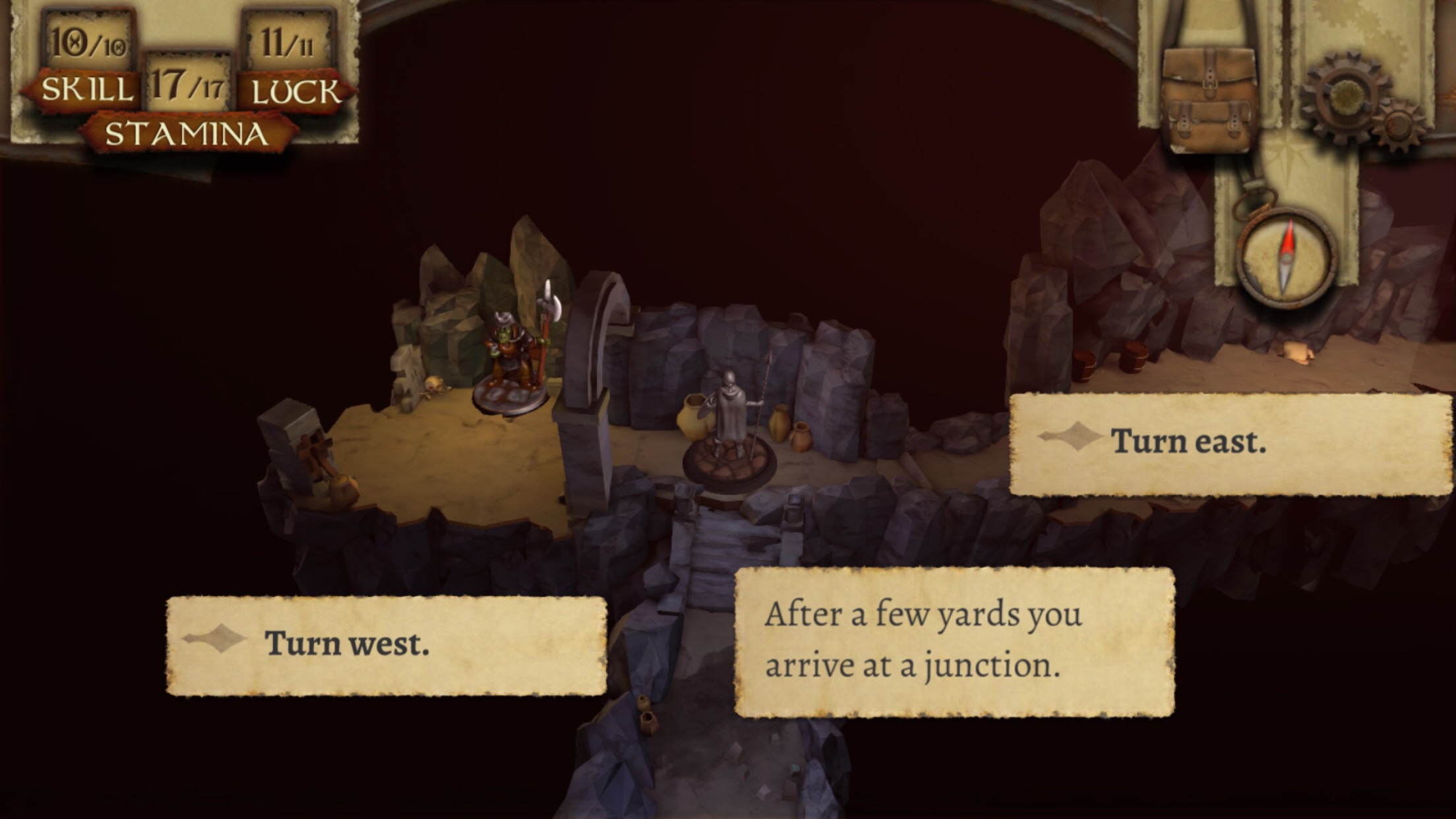 Then something happened that changed the landscape. Cambridge-based developer inkle released their adaptation of another Fighting Fantasy gamebook, Sorcery!, and it was marvelous. Instead of directly adapting the book or going in a totally different direction entirely as so many previous efforts had, inkle kept the spirit of the original and gave it a little gameplay spin and a whole new presentation. That little bit of magic impressed many people, and I suspect Tin Man was among them, because their take on The Warlock of Firetop Mountain shows a similar level of ambition. Like Sorcery!, it feels entirely true to the original gamebook, but takes the concept beyond what dice and bound paper could ever muster.

Don’t think that this isn’t its own game, however. Tin Man’s Warlock aims to create an experience not far removed from a tabletop board game. The evil warlock Zagor’s stronghold is represented as a fully-3D series of rooms and corridors that construct themselves right in front of your character as they follow along the guided path. The battles almost completely toss out the old dice-based skill system in favor of a simplified tactical strategy system where positioning and awareness of your enemies’ capabilities trump mere luck. The dice do occasionally come into play, mind you, but they serve more as tie-breakers when it comes to combat. Outside of battles, you’ll still be doing plenty of dice-rolling checks against your skill and luck stats, so don’t think that things are going to be too easy on you. 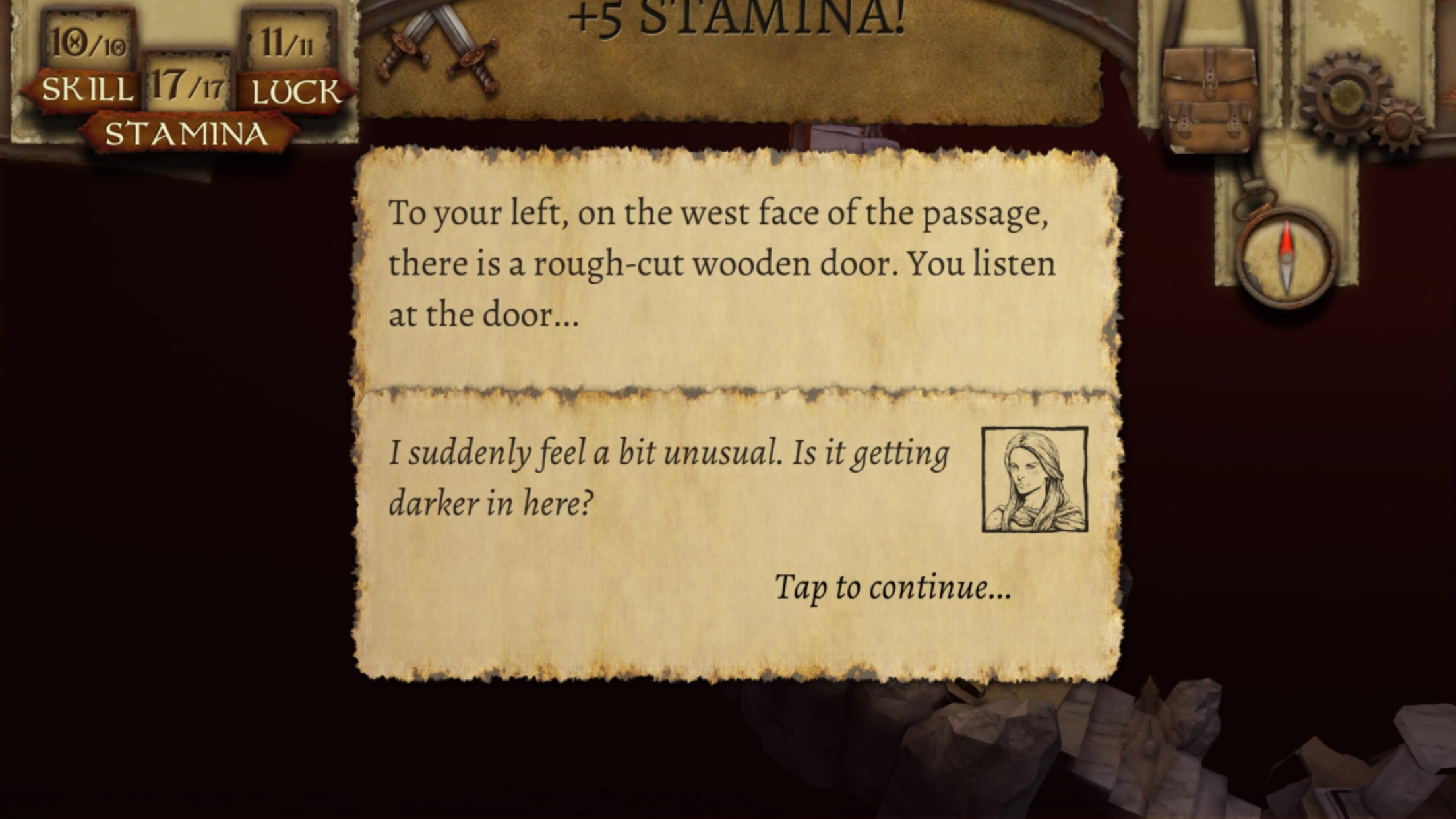 I was initially worried that these new battle rules would drain a lot of the tension out of the game, but while you rarely have to worry about being devastated by poor rolls of the dice anymore, things get more hectic the deeper you get. You really have to think at least a few moves ahead, since enemies will work together to box you in and keep you from mounting a proper counter-attack if you let them. Your only clue to each enemy’s next move is to watch them at the start of the turn, but if there are many enemies, you can’t really keep an eye on all of them at once. Most impressively, the larger boss-type enemies crowd the relatively tight combat arenas with their sheer size, making it particularly tricky to keep out of harm’s way. My only real knock on this new system is that it all moves a little too slowly for my liking. When there are several enemies on-screen, it can be kind of annoying waiting for everyone to take their moves. Otherwise, this is a most welcome trade for the original combat rules.

Combat is just one part of Warlock, though, and that’s more evident here than it has ever been. Zagor’s fortress is huge, and you simply will not be able to explore the whole thing in one playthrough. Not by a long shot. There are many paths to success, which is another positive way this breaks from the original gamebook, but none of them will show you all of the wonders of Firetop Mountain. Not only are virtually all of the original locations from the book included, but also quite a few areas new to this version. The text is thus a mix of the original script with a lot of extra passages and rewrites. There are new characters to encounter, new angles to returning characters, and some interesting twists and tips of the hat for those who are intimately familiar with the source material. 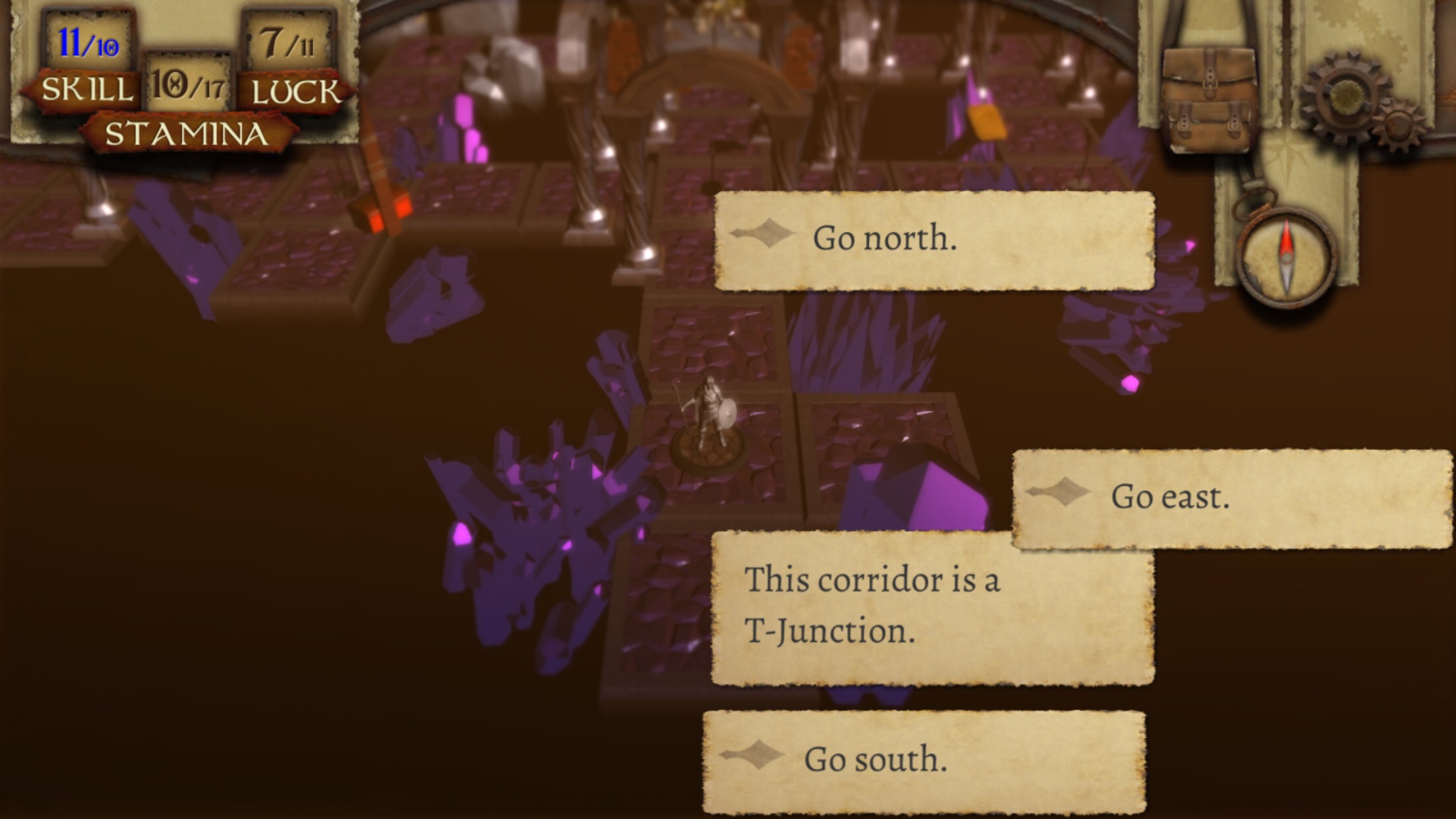 Part of the reason why you can’t see everything in one pass is connected to yet another addition, however. While in the original book you played as a relative blank slate, here you will have your choice of several pre-made characters, each with their own stats and abilities. You’ll have to approach battles in different ways depending on who you’re using and how they’re able to attack and defend. But they’re not just mechanically different. Each of them will have a slightly different experience in Zagor’s keep even if you try to follow a similar path. New routes will open up, NPCs will react in different ways, and so on. They’ll also chime in with their own thoughts here and there, though that serves more as garnish than anything. Every character will give you something new to look forward to, though, which ends up as a nice solution to the usual gamebook issue of replay value.

The base version of the game includes four different characters to use, with three additional packs of heroes available as IAP. You can buy up all of them for a discounted price, or pick up each pack individually if you’re not sure how many options you think you’ll need. The packs go for $2.99 each, while the complete bundle comes in at $6.99. It’s safe to say that if you enjoy your experience with Warlock using the initial four characters, you’ll certainly get your money’s worth out of the rest. At the same time, they’re not needed to enjoy the game or its story. They just offer additional angles on it. Other than that, there isn’t any other IAP to worry about. 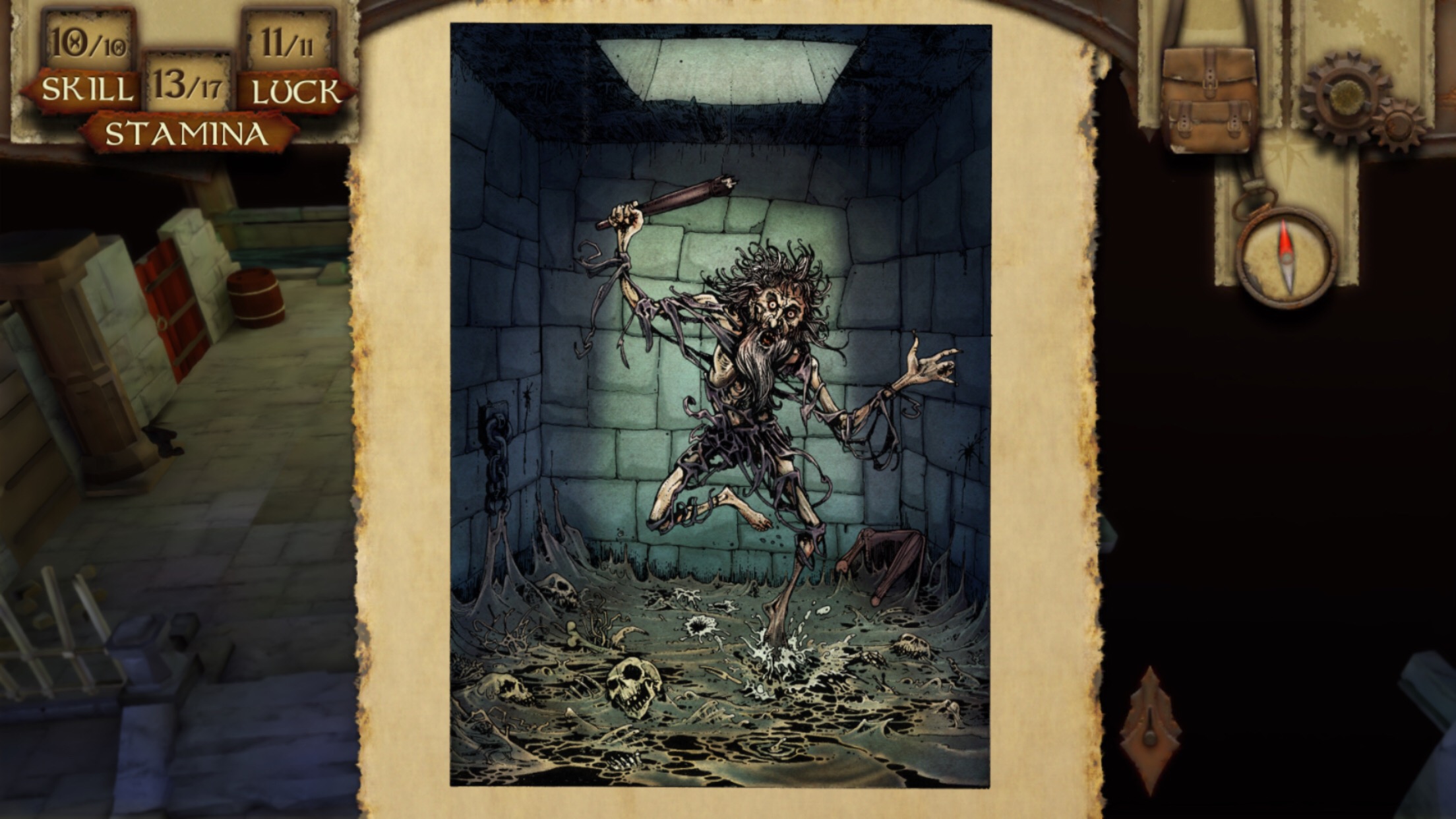 I also appreciate that in their quest to re-imagine The Warlock of Firetop Mountain, Tin Man Games didn’t forget the things that made the original great. The game has a fantastic new style of presentation, but every piece of artwork by the book’s artist Russ Nicholson has been included in both its original monochrome form and a newly-colorized version. The developer also commissioned some new artwork from Nicholson to help bring some of the new areas and situations to life as only he can. All of the new text is so well-matched to the existing passages that you’d be hard-pressed to spot the seams if you didn’t know where to look for them. This was clearly a passion project for everyone involved, and they knocked it out of the park.

Indeed, my biggest issues with the game are not really of the game itself but rather the particulars of its options. I love having all of these characters to play with, but each trip to the mountain is long enough that I wish I could have at least a few save files to work with. Instead, you only get a single file that only saves at certain checkpoints. If you want to try another character, you have to clear the existing adventurer’s progress. A more minor issue is that the game doesn’t currently support screen rotation, which can make it somewhat tricky to play if you’re plugged in. Depending on your taste for gamebook mechanics, you might also be put off by some of the instant death choices, but the aforementioned save points alleviate much of their sting.

Essentially, what Tin Man has done with The Warlock of Firetop Mountain is to transform the classic gamebook into a single-player role-playing board game, one that comes with its own colorful storyteller and several modules to vary the experience on multiple playthroughs. The presentation is sublime, the considerable amount of new content has been implemented carefully and respectfully, and the mechanical changes sand off some of the original gamebook’s harsher edges. I would have been quite happy had Tin Man done their usual fine work on a straight conversion of The Warlock of Firetop Mountain (and that is indeed on its way), but this is something altogether different and more special.