I feel like I’ve pontificated enough about the clicker genre. It’s perfectly suited for mobile devices (where you can leave it dormant and come back to a fortune literally anywhere), and although it has its flaws and isn’t for anyone, I’m glad that it exists. So many games have attempted to put their own unique spin on the formula with mixed results though, and that includes Realm Grinder (Free).

Where Realm Grinder tries to be different is its “good versus evil" spin. After roughly 30 minutes of tutorials you can make your choice — take your kingdom and continue on the path of good, or start building undead and demonic buildings. It’s a cool idea, especially since all of the icons, locations, and even the graphics change afterward, but really it’s just changing the fluff of what you click. 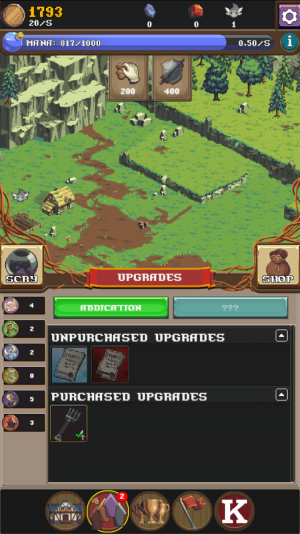 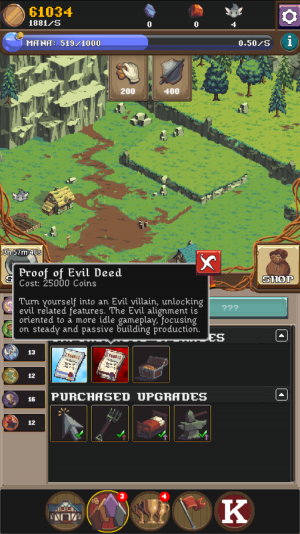 What I really like about Realm Grinder though, regardless of what side you choose, is its visual representation of everything. If you build something, even though it won’t show up in excess, it’s on your screen. There’s a sense of accomplishment when you actually see a Necropolis pop up, especially once you’ve acquired every building in the game and faintly recall grabbing each individual tier. There is some attempt to showcase good and evil as different styles (tapping and idling respectively), but they feel the same.

Of course the ride never stops and you’re constantly chasing the dragon of more and more money and more stuff to fill the screen with, just like tappers and other mobile simulators, but for a certain kind of person it provides a sense of accomplishment. That feeling is, granted, a little more short lived than a lot of other clickers out there. 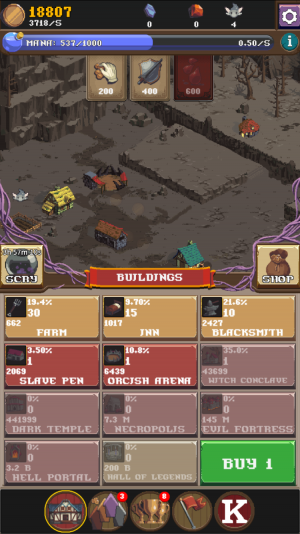 Buildings still mostly do the same thing — earn you more money through natural generation when you’re not manually clicking the screen for a pittance of cash. Sure, working your way up to a Hell Portal is awesome, but after that it’s just a super Blacksmith when you’re not using spells.

Yeah, spells — or, more ways to click. They’re the only source of interaction beyond the money grind, and mildly change up how much cash you accrue or the behavior of certain buildings. So if you have a ton of Dark Temples for example, there might be a spell that enhances their output for a given amount of time, which ensures that it’s a good idea to build lots of those temples and manually check into the game during certain intervals when mana recharges. It’s a way to get you to keep coming back, basically, and even though you can earn money by having the game idle, clicking and interacting is always better.

But if you aren’t patient, you can spring for some microtransactions that are muddled with different pricepoints on top of a premium currency. You see, for $4.99 you can buy an item called the “Gift of the Heroes," which increases production by 25% and rewards by 15%, among several other bonuses. It also unlocks another upgrade. And from $4.99 all the way up to $49.99, you can buy Rubies too boost your production, or choose to fast-forward anywhere from 12 hours to five days. Given that there’s no real competitive element or pronounced battling or PVP, it’s highly unlikely that someone would be that impatient, but the option is there.

That said, the pacing and earn rate isn’t really all that bad. Even though I did hit a few walls where the next tier felt insurmountable, I just kept the game closed for half a day, came back, and moved up. It’s not a good thing when Realm Grinder doesn’t entice you to constantly play it (as many other clickers have), but one could argue that these types of games weren’t meant to be played around the clock. A prestige-like option of starting over with bonuses is also a plus once you feel like you’ve mastered all there is.

You could do a whole lot worse than Realm Grinder when it comes to picking up a time waster, but the developers could do a lot better in turn. With some tweaks, it could be one of the more compelling clickers on the market.