It’s been a frenzied few months for The Pokemon Company on the App Store, with the strategic board game Pokemon Duel (Free) dropping out of nowhere back in January, and Johto Pokemon finally making the transition to Pokemon GO (Free) after weeks of anticipation and speculation. However, the Pokemon hype train doesn’t appear to be slowing down anytime soon, as today a brand new mobile game in the prolific series has been announced – but it’s not exactly what you may expect from a new Pokemon title. Splash! Magikarp stars the eponymous and useless water type Pokemon, as Magikarp-shaped holes have mysteriously appeared around a peaceful town by fishermen. The game is developed by SELECT BUTTON – who were responsible for the eccentric aquatic simulator hit Survive! Mola Mola! (Free) – and is scheduled for a Spring 2017 release, presumably in the Japanese App Store. Beyond a cryptic teaser image of the aforementioned Magikarp-shaped holes on a mock-up newspaper, we don’t know much about what Splash! Magikarp consists of, but another unconventional Pokemon spin-off title is certainly an exciting prospect. 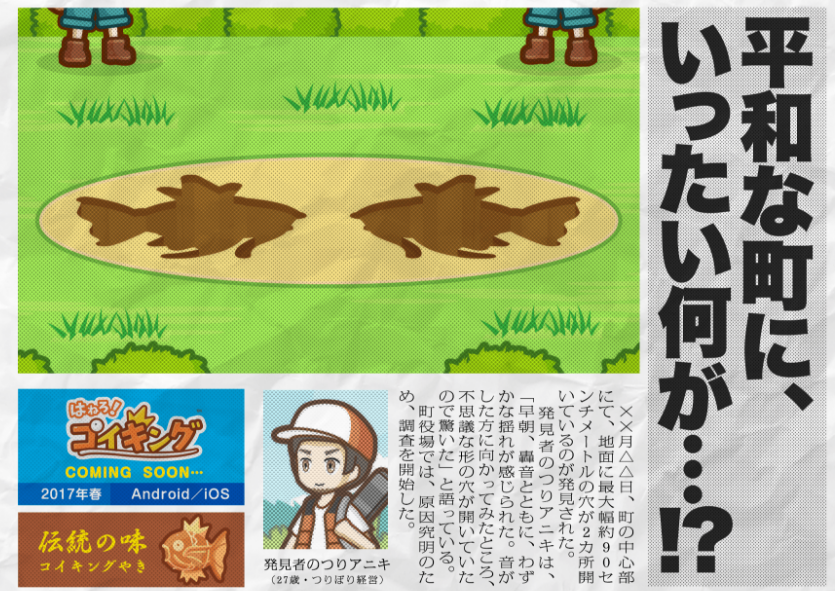 Despite being unequivocally weak and useless until it blossoms into a fearsome Gyarados in virtually every iteration of the Pokemon games to date, Magikarp has become a fan favorite through its prevalence in memes over the years, as well as its derpy charm that is undeniably endearing. However, I’d never have guessed that the legendary fish Pokemon would receive its own bespoke game – with its battling prowess in mind, we can probably rule out Splash! Magikarp having any form of conventional Pokemon combat. The image of the fishermen, as well as the Magikarp-shaped holes resembling the sort of cutouts that occur during ice fishing, suggest that some sort of whimsical fishing simulator is the best bet – perhaps Splash! Magikarp will be the next Ridiculous Fishing ($2.99) to hit the App Store. The fact that SELECT BUTTON’s previous game was an idiosyncratic and light-hearted fish simulator game does suggest a level of depth beyond merely catching Magikarp, so hopefully Splash! Magikarp is more than a mere colorful cash-in beneath the surface. If you’re as intrigued or confused about Splash! Magikarp as I am, head down to our forum thread and let us know what you’re hoping for when you pull out your Old Rod this Spring.