I’m a pretty big Fire Emblem fan. That used to be a small group, but it’s gotten to be quite large of late based on the success of the recent Nintendo 3DS releases. I know some fans aren’t happy with the changes in the series that brought about that success, but I’m thrilled because I don’t have to worry that Nintendo is going to smuggle it away to whatever closet or crawlspace they’ve locked Advance Wars up in. Fire Emblem Awakening was basically the last chance for the series, and was designed to be an epic last hurrah if things came to that. As I sit here today several years later, Fire Emblem is bigger than ever. So big, in fact, that Nintendo selected it to be one of their first mobile ventures. You really never know.

Of course, I doubt they chose it simply based on popularity. As successful as Fire Emblem is of late, Nintendo does have bigger guns in its arsenal. No, I suspect Fire Emblem was chosen because it is a good fit for the mobile market in several ways. As a turn-based simulation RPG, switching to touch-only controls wouldn’t hurt the gameplay very much. But more than that, its nuts and bolts are well-suited for application to the hottest style of game in Japan right now: the social RPG. There are tons of characters spanning 15 games and 25 years of art design. One of the core gameplay elements involves recruiting new characters for your team and choosing your favorites to field. With only a few exceptions, the games all involve fighting a series of battles with story segments separating them. Even the idea of dimension-hopping cross-overs is well-established within the series confines by this point. 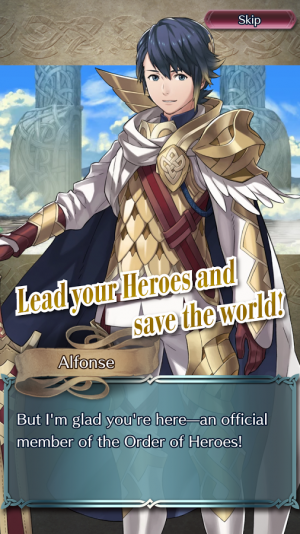 With that all being the case, I wasn’t surprised when Nintendo stated that Fire Emblem Heroes (Free) would be free-to-play. It makes a lot of sense for the mobile market, particularly when you consider that Nintendo would still like to sell full-priced Fire Emblem games on their own hardware. I fully expected things like a stamina meter, random gacha draws for characters, and frequent internet check-ins. I understand that for some, those things are deal-breakers. If that’s you, then yes, you probably won’t like Fire Emblem Heroes. It’s as much of a social RPG as games like Puzzle & Dragons, Monster Strike, and Final Fantasy: Record Keeper.

That doesn’t mean, however, that this is not Fire Emblem. Indeed, it’s impressive how well Nintendo and DeNA were able to adapt their formula to the social RPG model without losing the basic feel. This is a different kind of Fire Emblem game, to be sure. One more fit for those looking for a brief, pick-up-and-play experience. But I think it’s a game that is going to please an awful lot of Fire Emblem fans, even if only between releases of the main games on Nintendo’s hardware. Like DeNA’s successful Record Keeper, Fire Emblem Heroes does a great job of paring down the concept to an easily-digestible mechanic and slathering a rich sauce of fan-service all over top.

There is a story which you can pay attention to if you like. The important thing is that it gives you an excuse to visit worlds based around each of the Fire Emblem games where you’ll throw down in mini turn-based battles against their respective casts of characters. The maps take cues from the games themselves, right down to using music from each. These battles play out in a much simpler fashion than the main games. The map sizes are smaller, army sizes are limited to four for each side, and much of the variability that the series is infamous for has been drained out. There will be no surprise critical attacks or misses, level-up gains appear to be fixed, and you won’t have to deal with any unexpected ambushes. 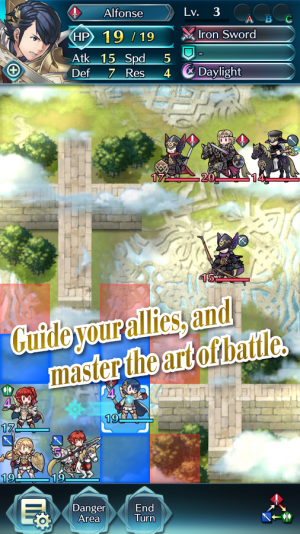 Instead of critical hits, units will use special attacks after a set number of turns have passed. The support and assist mechanics are gone, with characters instead having a variety of abilities they can spend their turn on to buff up their teammates. The weapon triangle remains intact, so lances beat swords, swords beat axes, and axes beat lances, but magic and dragon breath are now treated as part of that triangle as well. Characters can learn new passive and active abilities that augment their capabilities by spending SP, a resource accumulated through battles and fusion. Leveling up works the same way it does in the regular games. Smack an enemy for a little experience, kill them for a lot. Characters cap off at level 20, at which point you can use collected items to take them to a new tier.

The UI in battles is excellent. You can use the time-honored point and tap method that most strategy games on iOS use, or you can simply drag your character to the thing you want to kill, heal, or buff. Characters can’t hold items or switch weapons, so all you really need to worry about is who should face off against who, and where to position them to make your desired match-up happen. Terrain effects count, and you can also damage walls to create new paths. The maps are just big enough to create some interesting scenarios, though one of my concerns is how well the developers are going to keep things fresh over a long period of time with such a limited canvas to work with. I’ve already run into some absolute clunkers in terms of map quality. Fortunately, they’re the minority at the moment, but keeping it that way is going to be a tough job.

In addition to the story battles, there are other places to spend your stamina. There’s the Training Tower, where you can beef your characters up by fighting against appropriately-matched enemies. You’ll also earn materials from doing that can be used to give characters an extra experience boost without even fighting. The Special Maps section gives you the chance to earn specific characters for your collection. The Arena Duels area, which has its own separate stamina gauge, sees your squad face off against another player’s team. The winner earns points towards a prize at the end of each season. There’s one other area that I’m yet to open up in spite of being several hours into the game. I suppose we’ll have to wait and see what it has to offer. 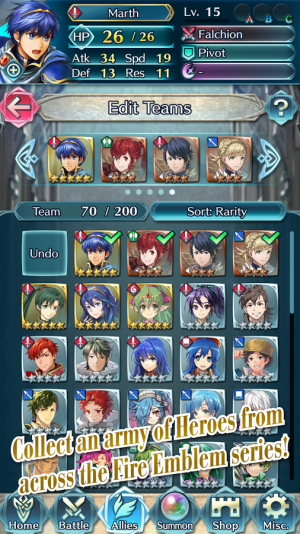 The game’s monetization uses all of the familiar tricks of the trade, but in a much more lenient fashion than most social RPGs. You start off with a massive stamina gauge, allowing you to potentially play for a couple of hours without stopping. You can fully replenish that gauge with an item that is available on My Nintendo in exchange for platinum coins, wait it out at five minutes per point, or pay a premium orb to top it off. So far, the story stages cost two stamina points per attempt, while special stages cost four or more. I’m sure that will go up over time, but it’s far kinder than a lot of other games of this sort.

We can see another example of its gentler approach in how its random gacha system is set up. Five orbs gets you one pull, but you can choose which type of character you’d like it to be. So while it may not be the exact person you were hoping for, and not the tier you wanted, you can at least decide if you want a much-needed axe-wielder over your fiftieth swordsman. Basically, when you choose to pull, you’re presented with five different crystals to choose from. The color and shape of the crystal will tell you the element of the character inside. If you choose to pull a second character immediately, you can do so at a discounted price of four orbs for the next three pulls, with the fifth and final crystal costing you only three orbs. It works out to five characters for the price of four, which is pretty nice.

As in most games of this ilk, orbs can be used in a variety of ways. You can use them to continue, pull new characters, expand the size of your barracks (allowing you to recruit more characters past the initial cap of 200), and top off your stamina. You can also use them to upgrade your fortress, giving you a permanent bonus to your experience point gains. You can get these orbs as login bonuses, as a one-time reward for clearing a stage, or by checking off certain achievements. Naturally, you can also buy them via IAP. Usually in a game like this, the cost works out to about a dollar per unit of premium currency, but it’s a little cheaper here, instead costing two dollars for three orbs. It’s easy enough to assemble a decent team just from the free orbs the game gives you, but if you’re chasing specific characters, well, you know the routine by now.

Thus far, I’m really enjoying Fire Emblem Heroes. I’m hesitant to give a game like this a review score based on only a single day of play, though, so we’ll just say these are enthusiastic first impressions. Based on the parties involved, though, I’m confident that it will remain fun and reasonably fair. I’d certainly recommend any Fire Emblem fan at least give Fire Emblem Heroes a shot. You might not end up sticking with it, but I bet you’ll have at least a little fun with it even if you do bail out at some point. It might not be the game that some hoped for, but it at least shows that Nintendo has what it takes to make a relatively faithful, enjoyable free-to-play game out of one of their long-running franchises.