Hello, gentle readers, and welcome to the RPG Reload Play-Along. Each month, we’ll be playing an iOS RPG together, sharing laughs and tears in equal measures. The post on the front page (like this one!) is basically here to announce the game in question and give a few tips on getting started. The real action will be happening in the Touch Arcade forums, where you’ll find a thread dedicated to each month’s featured game. Sign up if you haven’t already, post your screenshots, ask for advice, or just chat about your misadventures with others. We’ve got a great community of RPG fans here at TouchArcade, so let’s make the most of it! As a little incentive, at the end of each month, I will randomly pick one of the participants and send them something small and silly from here in Japan. All you have to do to be eligible is, well, play along with the Play-Along! 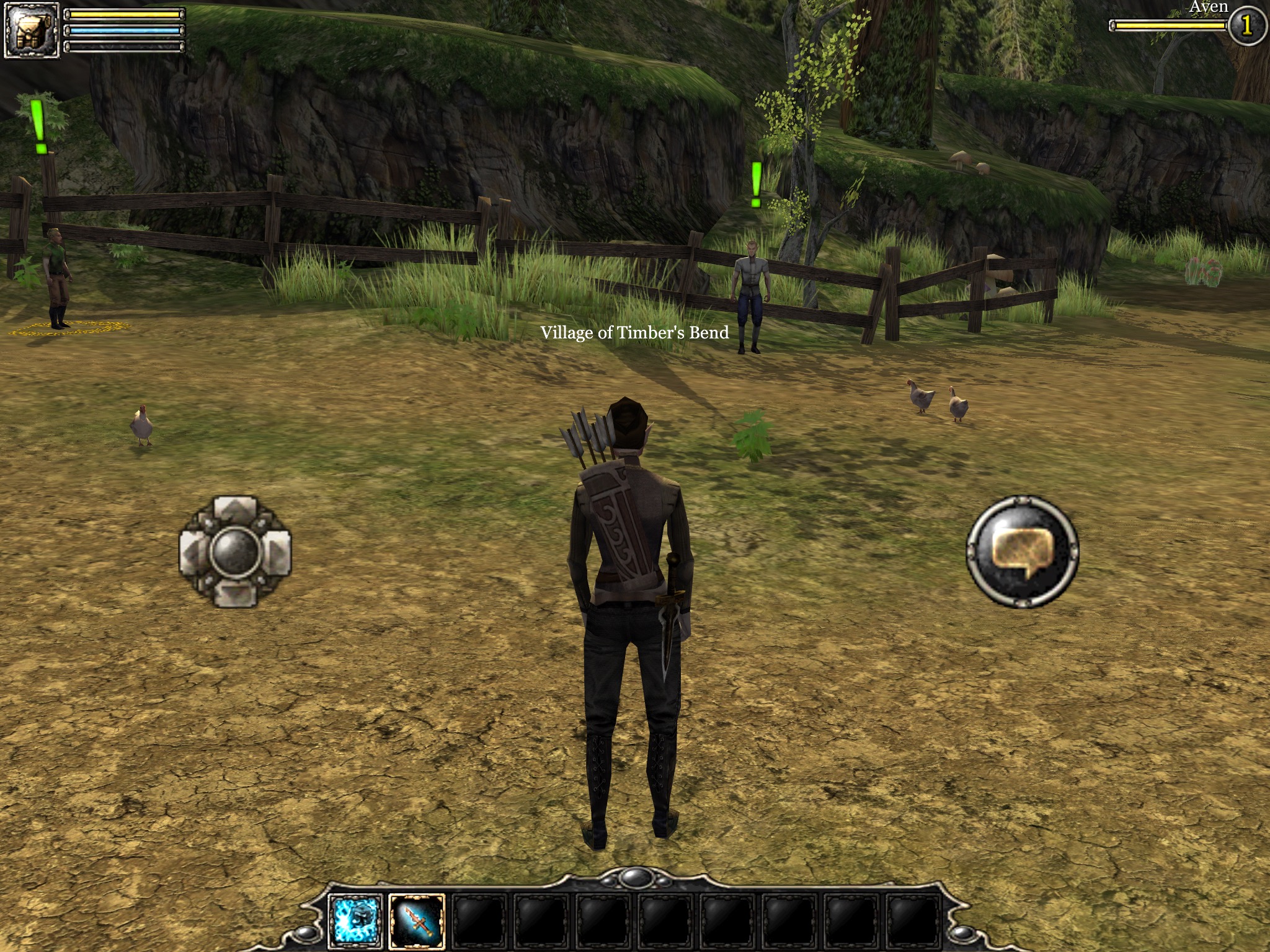 Our first Play-Along went even better than I expected, with more than 30 people joining in on the thread in the forums. We had a great mix of Final Fantasy veterans and new players alike, all sharing their stories and screenshots. A big thank you to everyone who participated. Now, for January’s Small and Silly Prize winners. First off, member RHess00 managed to pull off a wild accomplishment, beating Chaos with just a solo Monk. I won’t always offer up achievement-related prizes, but RHess00 certainly earned one! As for the random participant award, the name drawn from the Magic Moogle Hat is none other than Rabendoppel! New to the forums and Final Fantasy itself, Rabendoppel bravely sallied forth with a dice-rolled party of two Monks, a Thief, and a Red Mage. That’s some party for a rookie! RHess00 and Rabendoppel, I’ll be in touch via PM on the forums to get your addresses so I can send you your prizes. To everyone else, well, a new month brings another chance to win a Small and Silly Thing from Japan! 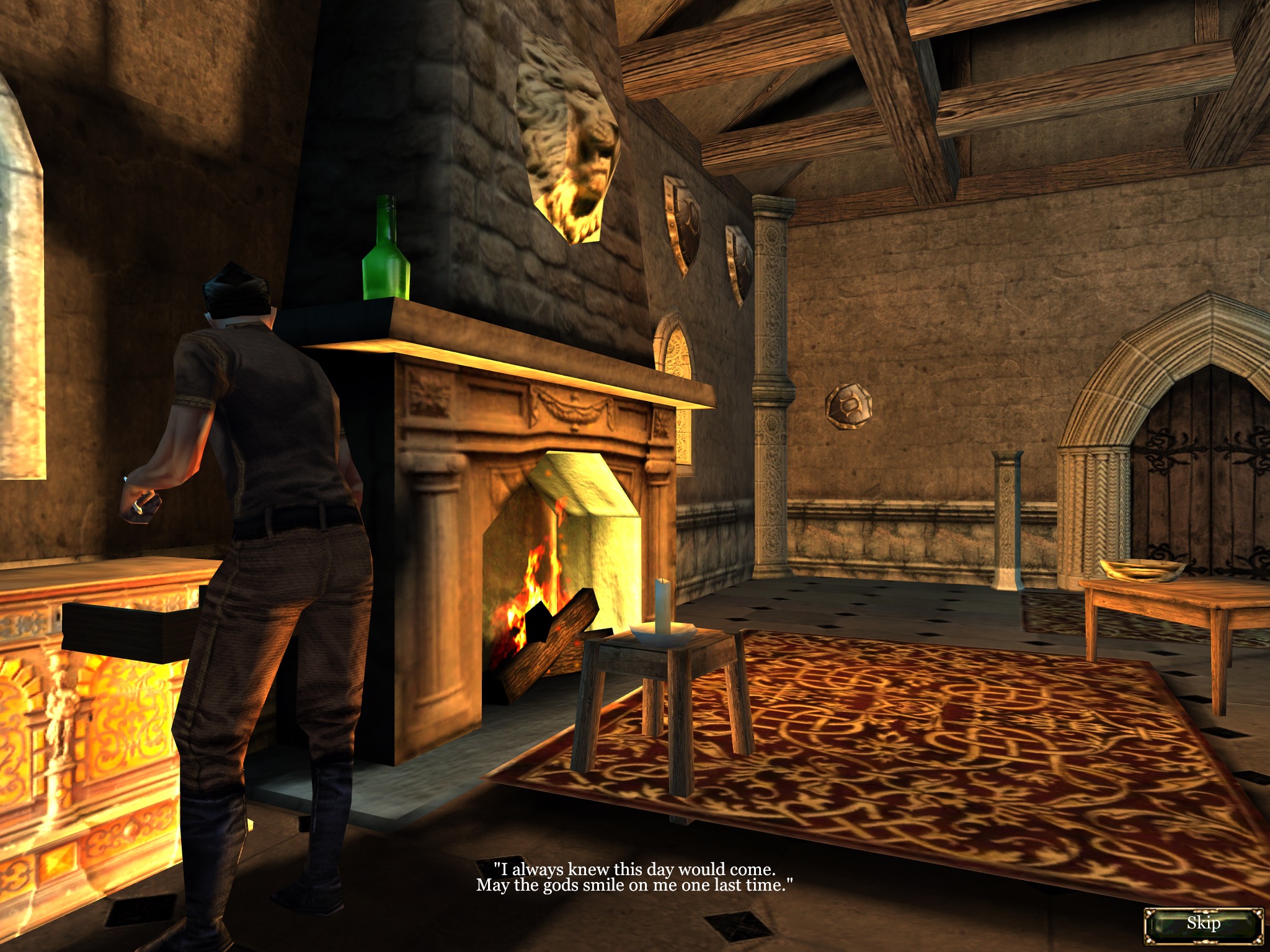 For our February Play-Along, we’re jumping out of the world of classic JRPGs and into the realm of WRPGs with Aralon: Sword and Shadow (Free) from Crescent Moon Games. An iOS classic, this 2010 release tosses you into an open world of adventure and danger. With plenty of quests and a fair bit of character customization options, I think this will be a fun one for us to play together. Just like last month, you’ll need to grab the game itself from the App Store if you don’t already own it. Then, either log in or sign up for the TouchArcade forums and head on over to the February RPG Reload Play-Along: Aralon thread to say hello. You don’t need to beat the game to qualify for the random draw, but I would like to see at least one screenshot of your progress at some point, okay?

***Please note that if your device is on iOS 10 and up, you will need to turn off the music via the options due to compatibility issues*** 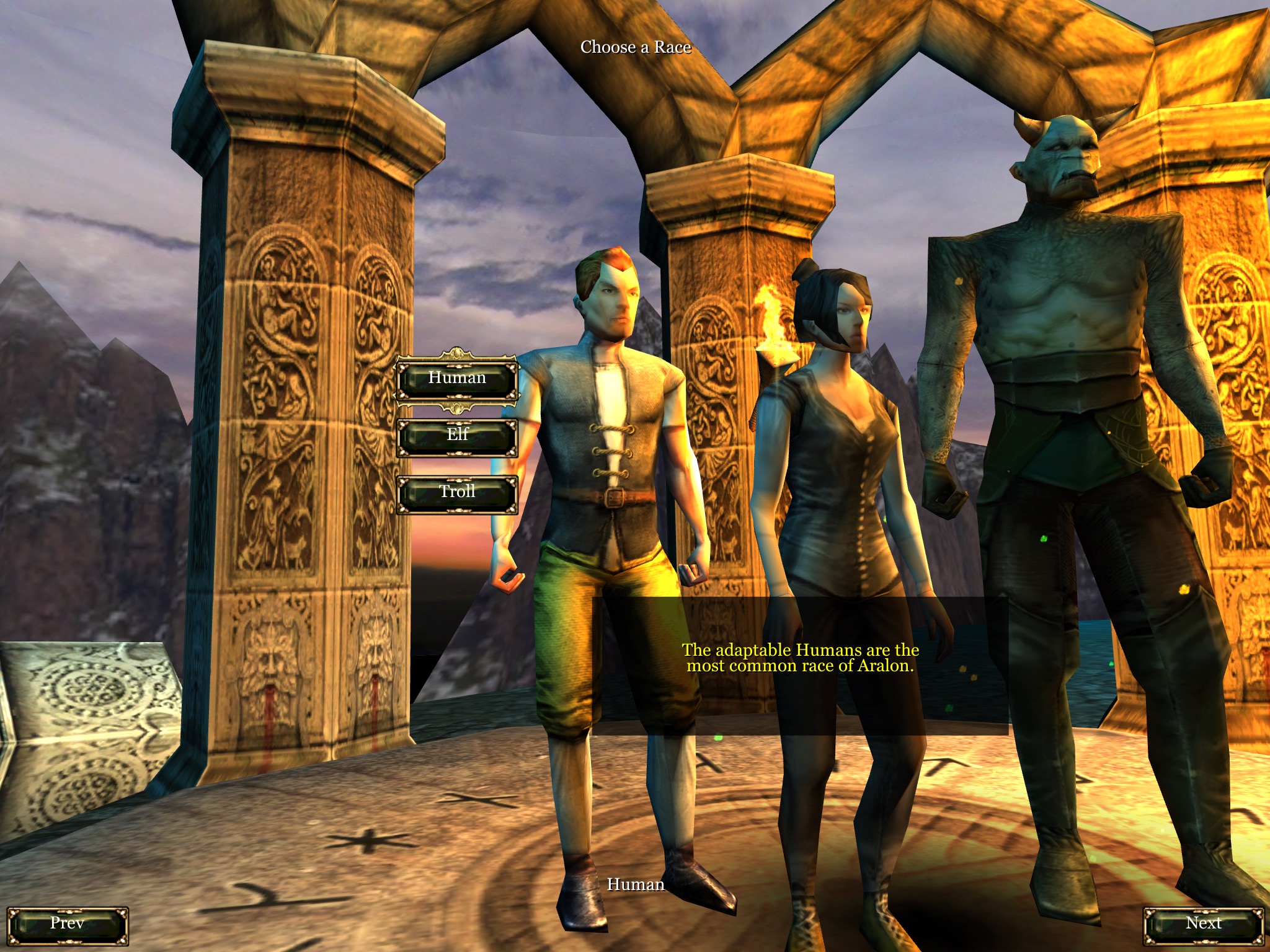 Aralon: Sword and Shadow is one of those games where it’s fun to discover things on your own, but I’m going to give a little advice to help you get started, at least. The first thing you’ll need to do is to roll your character. You can choose between three races: humans, elves, and trolls. You can also choose your gender. There aren’t many substantial differences between the races, but be advised that trolls can’t use two of the job classes (Ranger and Mage) and are restricted to males only. Basically, choose whatever you prefer here.

Your job class, on the other hand, is a much more important choice. Each class has access to different skills and equipment, and the way you get through the game is going to depend heavily on which one you select. Let’s go through them one by one.

Warrior: Pretty much as you would guess, the Warrior specializes in brutal physical attacks. Not only can the Warrior make use of the widest selection of weapons and armor, they can also dual-wield axes and hammers, which basically turns them into whirling dervishes of death. If you choose to be a Warrior, you’ll want to spend most of your earned attribute points on strength, agility, and spirit to power your special moves. Playing as a Warrior is probably the easiest route through the game, but it does lack a certain flavor.

Paladin: These holy fighters can use almost as wide a range of equipment as Warriors, but they can’t use axes or dual-wield. They more than make up for that with their access to certain magical abilities, allowing them to heal and protect themselves before they stride into battle. You’ll want to focus on your agility and spirit, just as with the Warrior, but you’ll also want to throw some points into the intellect attribute to support your casting. Paladins are a fun choice for players who like to do a little bit of everything in battle.

Rogue: This is probably the most difficult class to play as. Rogues have quite a few equipment restrictions, only being allowed to equip light or medium swords and armor. They can’t carry a shield, but they can dual-wield swords, which is pretty nifty. They have access to the stealth skill which, when combined with a backstab, can do devastating damage. They are the only class that can pickpocket, and their skills include some fun status ailments to inflict on enemies. Their defense is weak so it’s vital to put attribute points into endurance and agility. Like other classes, they also benefit greatly from beefing up their spirit stat. You have to play carefully with a Rogue.

Ranger: My personal favorite class, the Ranger has access to the stealth skill and the bow weapon, allowing them to do nasty attacks from afar. Rangers can also use swords when the enemy gets in close, but can’t use a shield. They also have access to a variety of magic spells, both offensive and defensive. You’ll want to beef up endurance to cover your defensive weaknesses, strength to help you deal more damage, and intellect to help your spells. Rangers also need to keep track of how many arrows they have. Always stock up when you have a chance. A Ranger without any arrows is just a less-competent Rogue.

Mage: This is a really fun class to use, but you have to use your head a little. Of course, mages have the biggest equipment restrictions. Only light armor and staves for you. Also, this is the only class that can’t max out its skill tree. There are 55 levels on the tree, but only 49 to earn in the game. So you need to think about what you want, or perhaps more accurately, what you don’t want. The pay-off is grand, though. Mages in Aralon are absurdly powerful both offensively and defensively. They’re the best class for handling crowds, and once you’ve learned enough spells, you can basically just rotate between them like a Gatling gun loaded with hot death. Key attributes here are agility, endurance, and spirit. You won’t be able to take many hits by default, and you’ll want that spirit boost to keep the hits coming. 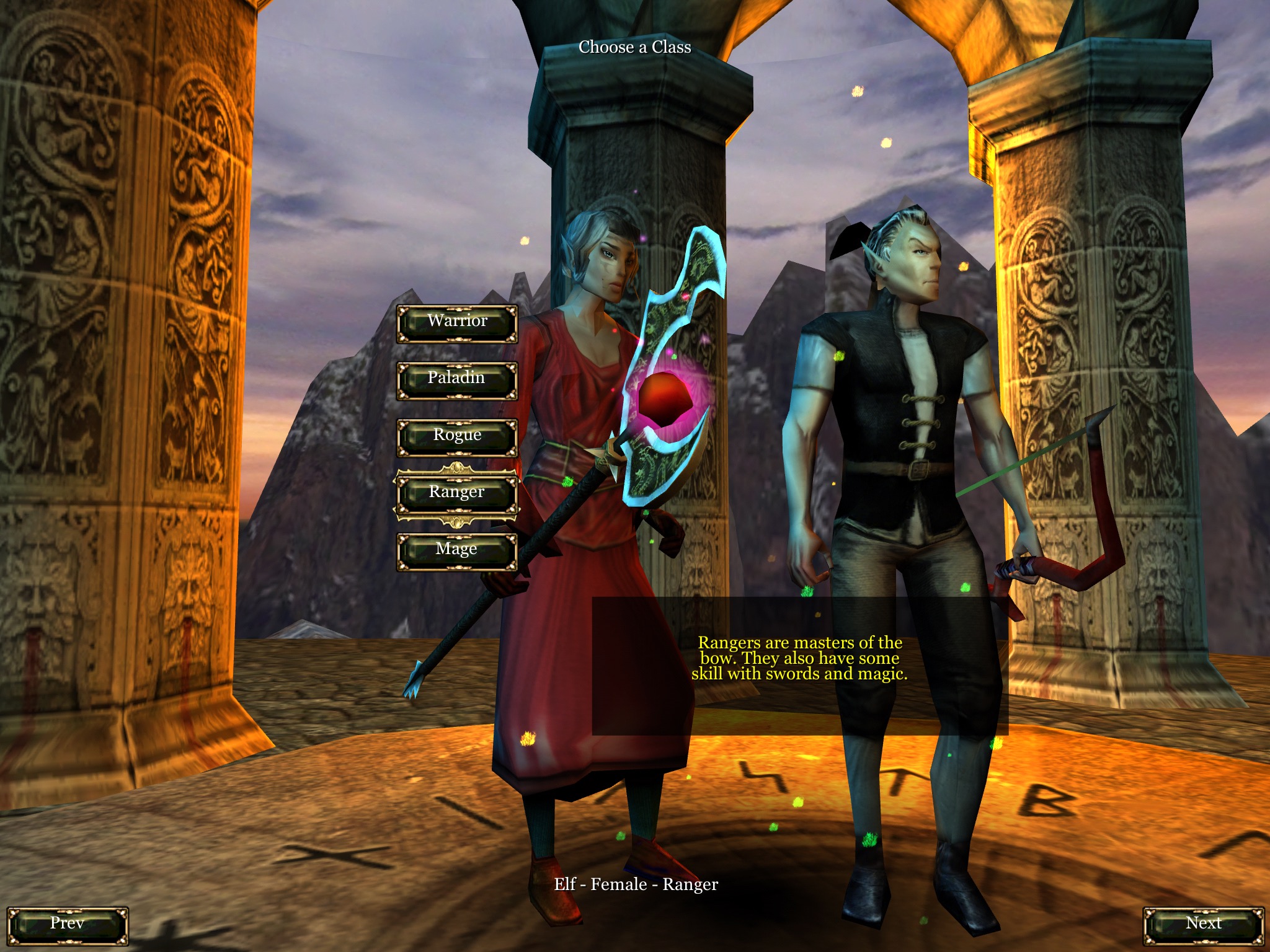 If you can’t choose, you can always fall back again on our old friend, the six-sided die. You could roll the die multiple times to make things balance out somehow, but I think it just makes sense to assign Warrior to one and six, and have the other classes fill out two to five. It makes sense there would be more Warriors running around, right? With your job selected, you can choose your character’s appearance and get into the game proper.

Aralon is pretty good about pointing you in the right direction at first, so just follow the instructions and pick up the quests around the first town to get a feel for the game. My only big points of advice are to save often, know when to beat a hasty retreat, and make sure you’re linking skills and equipment to the toolbar for convenient use. Also, don’t forget to loot every corpse. Money isn’t the easiest thing to come by, and certain classes (Warriors especially) are going to need a lot of it. Oh, and make sure you actually spend your attribute points when you level up. Just go into the menu screen and you should be able to assign a skill point and a stat point. They won’t do you any good just sitting there!

Anyway, that should be enough to get you going on Aralon: Sword and Shadow. I’ve decided to play as a Female Elven Ranger this time around, because I like shooting things with a bow. That’s the way it is. You can follow my exploits and join in yourself by swinging by the February RPG Reload Play-Along thread in the TouchArcade forums. I’ll see you there!