Once upon a time, there was a fairly popular Java-based online RPG named Wyvern (Free). It began its life in 2001 and ran for 10 years before its server was shut down in April of 2011, much to the sadness of its devoted players. It took some legal wrangling, but its creator Steve Yegge was finally able to secure the rights to bring the game back, and he’s opted to do it on iOS. Inspired by 1980s PC RPGs, Wyvern has something of a vintage look and feel to it, and it’s anything but beginner-friendly. If you’re okay with that, however, you’d be hard-pressed to find a deeper MMORPG experience on mobile.

You’ll begin the game by choosing a character race, appearance, and name. You can play as the expected humans, elves, dwarves, and halflings, as well as more exotic selections like giants, pixies, a variety of cat-creatures, and nagas. Except for humans, each of the races has particular sets of skills and abilities unique to them. Humans have none of those advantages but gain more skill points per level than any other race, allowing them to progress more quickly. After you’ve created your character, you’ll be thrown into the world. You can get right into the action if you want, but it’s advisable to go through the tutorial the game provides. It’s a bit long and dull, but if you don’t have any prior experience with Wyvern, you really will want to know what it teaches. 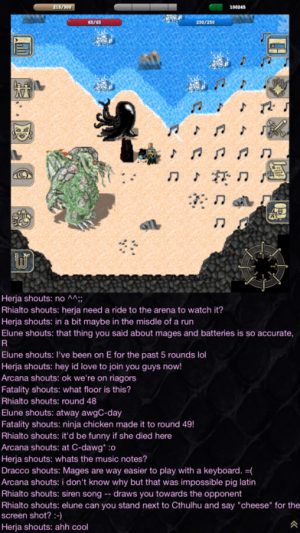 Upon finishing that tutorial, you’ll be sent to your very own home, which you can decorate and rearrange as you see fit using the game’s build mode. In addition to serving as a bit of creative output and a place to store your stuff, your home also has a convenient portal that will take you to the first town. From there, you’re more or less left to your own devices. You can explore around, talk to other players, pick up quests, go fight monsters, or whatever else you would like. There isn’t a lot of guidance, but at least in my experience, the other players are quite helpful and friendly. There are lots of people around who have been playing Wyvern for a very long time, and their ambassadorial manner certainly helped overcome the rather steep initial learning curve.

Completing quests earns you quest points, while defeating monsters earns you experience points, loot, and cold, hard cash. Once your level gets high enough and you’ve met certain other requirements, you can join guilds for various job classes, allowing you to specialize a bit more. You have a lot of freedom as to how your character grows, since you can choose how you want to spend your skill points that you earn from leveling up. You’ll have to track down the appropriate trainer for the skills you want to build up and have some cash ready, of course. One of the main benefits to joining guilds is that it gives you access to some great trainers you won’t find otherwise. Since it’s effectively a class change, you’ll also get a new sprite for your avatar and gain access to some specialized equipment. 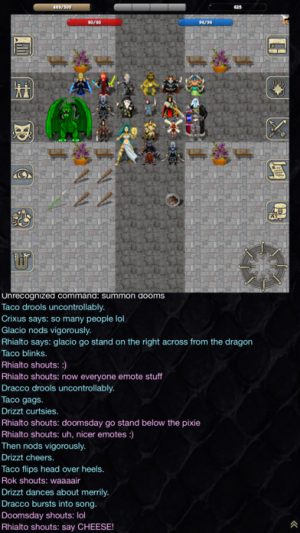 The battle system isn’t terribly complex. If you’re a melee fighter, you just have to sidle up next to the enemy and tap on them. Ranged attacks and magic require a bit of targeting, and magic spells sometimes require you to have reagents on hand for each casting. You’ll certainly need to master the fine art of side-stepping and retreating if you’re squishy or the enemy is particularly strong. The UI can be a bit fussy in combat if you’re doing anything other than bonking your weapon into your foe, but I’m not sure that there was a better way of doing things given the features of the hardware. You can pinch to zoom in at any time, and while that wasn’t the best idea for exploring, I did find it helped a lot during battles.

One of Wyvern‘s main selling points is in how much content it has to offer. There are literally thousands of maps to explore, and assuming the iOS version follows the pace that the original game did, you can expect a lot more to come. You’ll come across quests scattered around the maps, most of which involve going somewhere to retrieve an object of some sort. Nothing too surprising if you’ve played RPGs from the era this game is paying homage to. Completing quests earns a variety of rewards, but you’ll always get some quest points. Those are necessary for breaking through certain level caps, though you can buy your way through those gates if you have enough gold, too. 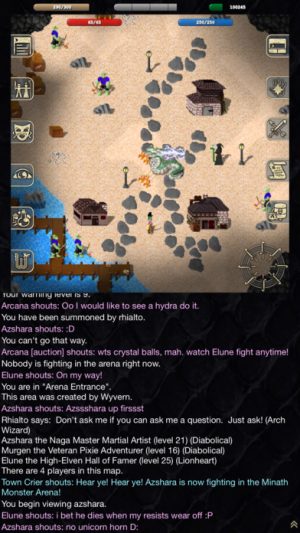 Wyvern supports keyboards, and it’s something I’d recommend if you’re going to get heavily into the game. Not only because it’s easier to communicate with your fellow players, but also because although the touch controls are working hard to cover the myriad of commands, they’re not completely up to the job. I can’t really think of a better way this could have been done on a touchscreen without sacrificing the complexity of the game, but it’s something you should know before you get into it. Luckily, the game is free to download and play, so you’re not really losing out on anything by giving it a try.

So what’s the catch, then? Well, the game does have IAP for purchasing crowns, the game’s main currency. The game is balanced quite well at lower and mid-range levels, but the farther in you play, the more it feels like you need more money than you’re bringing in. Still, for a free-to-download MMO with no monthly fee, it hardly feels sporting to complain too much about feeling like you have to throw in a few bucks here and there to grease the wheels. It’s not like you have to, either. You can conceivably grind up funds if you want to go that route.

Wyvern is a deceptively deep MMO hiding behind a, well, let’s say classic presentation. The initial learning curve is murderously steep, but that’s off-set somewhat by a helpful and eager player base. The UI can be a little picky and hard to use at times, but a certain degree of clunkiness can be expected from adapting a game designed around a keyboard to touch controls. If you think you can contend with those issues, or have a keyboard and are willing to use it, you really ought to give Wyvern a try. It’s like jumping into an old 1990s MUD, with all the strengths and weaknesses that implies.