Mobile is home to the widest variety of video games in the world. Plenty of traditional gaming experiences have been released on mobile and are typically controlled with virtual buttons, which is fine for the most part, but what truly stands out are those games that feel like they simply wouldn’t be possible without the use of a touchscreen. Splitter Critters ($2.99) is one of those games. And while the touchscreen mechanics are unique, it’s the fun, challenge, and whimsy of Splitter Critters that raises it into that next level of great mobile games. 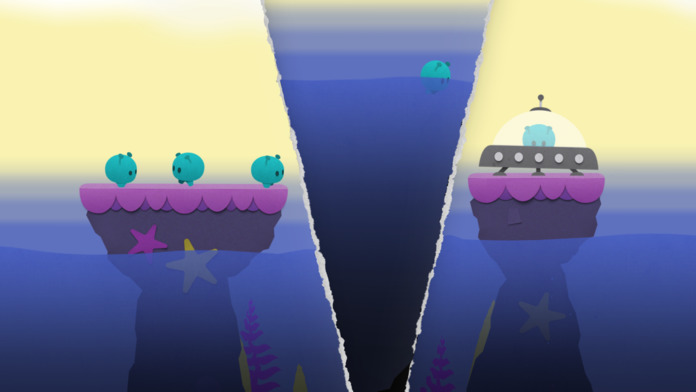 The basic premise of Splitter Critters is pretty simple. Wandering critters need to make it to their spacecraft, but said spacecraft is generally on a whole different plane of elevation than the critters themselves. And since these critters aren’t the brightest–they merely walk back and forth on their own, only changing direction when they bump into something–it becomes your job to ensure that these adorable little weirdos can reach their spacecraft simply by walking right to it like the lemmings they are.

You do that by literally slashing the scenery into pieces and then rearranging it so the differing elevations connect at the same level. Spacecraft up on a cliff with the critters wandering down below? Well, slash the scenery at the edge of the cliff and then slide that sucker on down so the cliff edge meets up with the lower ground portion where you made your slash. Yes, Splitter Critters is yet again one of those games that’s far more difficult to explain with words, but very easy to grasp by simply watching the trailer.

Of course, things aren’t always that “cut" and dry (HEH) in Splitter Critters, and it doesn’t take long for levels to start becoming serious head-scratchers. You also have a limited number of slashes you can make for each level, so once the challenge starts ramping up you really need to be selective on where you make your cuts and where to slide the pieces. It’s an absolutely interesting game that really feels at home on a touchscreen, though mouse and cursor should do the job sufficiently too, and there’s plans to bring the game over to desktop. iOS is where it feels most natural, though.

We’ve already predicted that Splitter Critters is a shoe-in for an Apple Design Award this year. Apple LOVES games like this, and why shouldn’t they? It’s a fantastic game with a unique touchscreen concept all wrapped up in an adorable package. If any or all of this sounds interesting to you, Splitter Critters is an easy recommendation and is available for $2.99 with no IAP.