Milkmaid of the Milky Way

In recent years, adventure games have made a huge resurgence, and mobile devices have proven one of the best platforms to experience them. Whether they’re ports of classic games or entirely new ones, a touchscreen is the perfect way to get all your pointing and clicking on. The digital gaming revolution has also made it so that much smaller developers are able to create and release their games to a wide audience. Both of these points relate to our Game of the Week pick this week, the indie point-and-click adventure game Milkmaid of the Milky Way ($3.99), created entirely by solo developer Mattis Folkestad aka Machineboy. 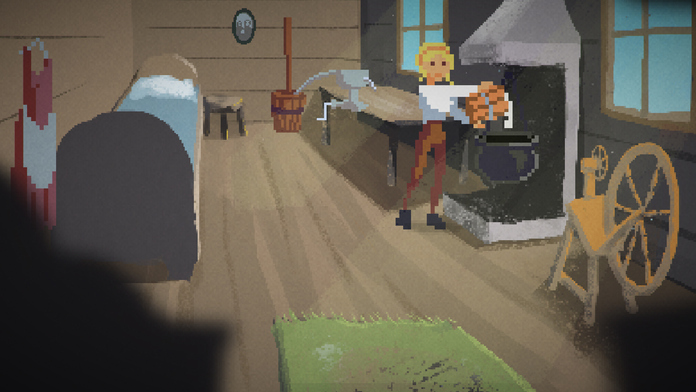 As you can see, Milkmaid of the Milky Way shoots for that classic Lucasarts style with blocky pixel characters that still exude a ton of personality and are smoothly animated. The backgrounds are also hand painted and the pastel color palette really sets the right tone for a game that takes place in 1920s Norway. You play as Ruth who lives a humble life on a secluded farm in a faraway fjord, until one day strange things start happening and out of nowhere a large golden ship appears and Ruth’s life gets turned upside down.

Perhaps the most interesting thing about Milkmaid of the Milky Way is that all of the dialogue in the game is written in rhyme. Making a story-driven game like this and ensuring all the dialogue rhymes couldn’t have been an easy undertaking, and it definitely feels a bit forced at times, but it also adds a tremendous amount of charm to the game and sets it apart from your average adventure game.

Oh, and one more little thing I need to mention: You can run in this game! I can’t even imagine the hours I’ve spent in my youth wandering from screen to screen in old adventure games while my character walks painfully slow the entire time. Especially when you get stuck and you end up retreading all the spots you’ve already been. It can be very frustrating! Here, Ruth has a brisk pace by default, but if you really want to cover some ground you can double tap and hold to make her run. It’s such a tiny detail but it makes such a huge difference in games like this where backtracking can be so common.

Right from the brief intro scene, it’s clear that Milkmaid of the Milky Way is a lovingly crafted affair. The fantastic visuals, the incredible soundtrack, and of course the charming rhymes. I’ve only put in about 90 minutes so far so I’m not sure how long this adventure will go, but even in that short amount of time I’ve been having a blast. They rarely make adventure games like this anymore. That it was entirely the work of one man is quite astonishing. Players in our forums have been similarly impressed with Milkmaid of the Milky Way, so if you enjoy adventure games on even the most basic level, this is one you’ve got to check out.