Twin-stick shooting. Roguelite elements. Pandas with heavy ordinance. It was inevitable that someone, at some point in human history, would put these things together into one game. Continuing my mop-up of games that missed getting a review upon their initial release, it’s Feral Fury’s turn at bat. This game has developed a strong following in the TouchArcade forums, both because of the quality of the game itself and because of its highly-responsive, courteous developer. Feral Fury ($4.99) walks along a similar path to games like Enter the Gungeon and Binding of Isaac, and although it’s not quite up to the level of those games, it’s still an awful lot of fun.

There’s a somewhat detailed background setting, but all you really need to know is that you are a gun-toting panda who needs to kill what you can, avoid what you can’t, and find the key to escape each level before all the risks you’re taking catch up to you. Along the way, you’ll find a variety of helpful items like new guns, stat-boosting stims, armor, and more. Use it while you can, because aside from randomized levels and loot, the other main thing Feral Fury borrows from roguelikes is perma-death. Once you’re out of health, you’re finished. The one consolation is that while you’re blowing things up, you’ll also be gathering blue orbs that can be exchanged for temporary starting perks and permanent, persistent upgrades that will help you get a little farther the next time you play. 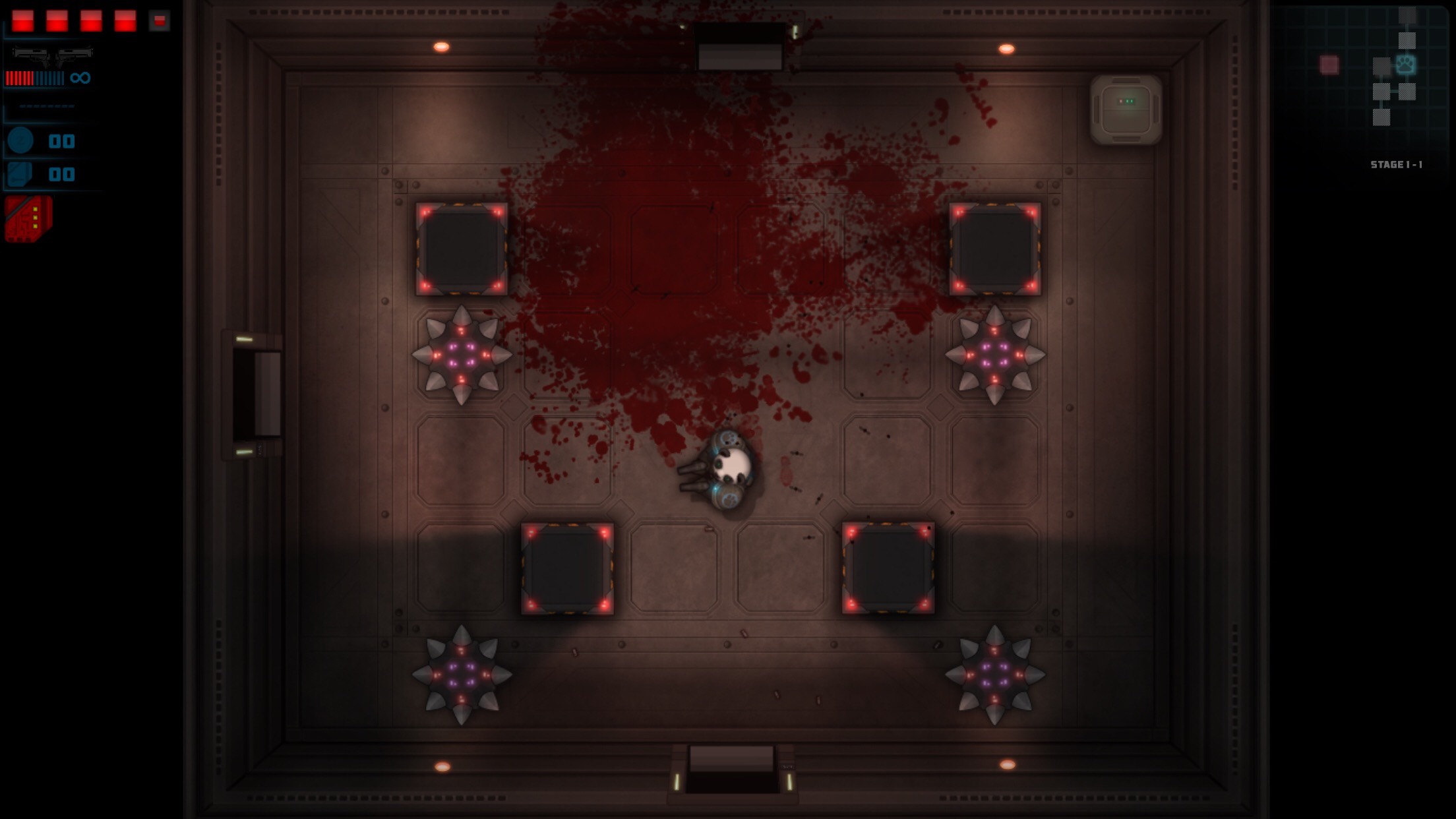 Feral Fury offers up three modes of play. The basic story mode challenges you to make your way through thirteen stages grouped into five chapters. You’ll need to keep your wits about you if you want to see the end of the game. You’ll also need a little luck. The daily run has you competing with other players on a leaderboard to see who can rack up the highest score. The twist here is that you’ll be given three random items to help you and one random curse to harm you. These conditions make every day a new test of your skills. Finally, an endless mode was added in an update to the game after its release. I suspect for many players, the story mode will be endless enough, but if you’ve managed to conquer it and are looking for greater challenges, here you go.

Each stage is made up of a number of interconnected rooms. Your main goal is to retrieve a keycard and make for the exit, but there are plenty of other things to find along the way. Secret rooms are hidden behind destructible walls, useful items lurk in crates, and helpful items can be bought from merchants and vending machines. While not every room has enemies, most of them do. Luckily, you have guns. Your panda warrior starts off with a fairly weak gun with infinite ammo, but it’s good enough to do the job in many cases. The game uses twin-stick controls for its shooting, so you just need to point your right thumb in the direction that you want to murder towards. 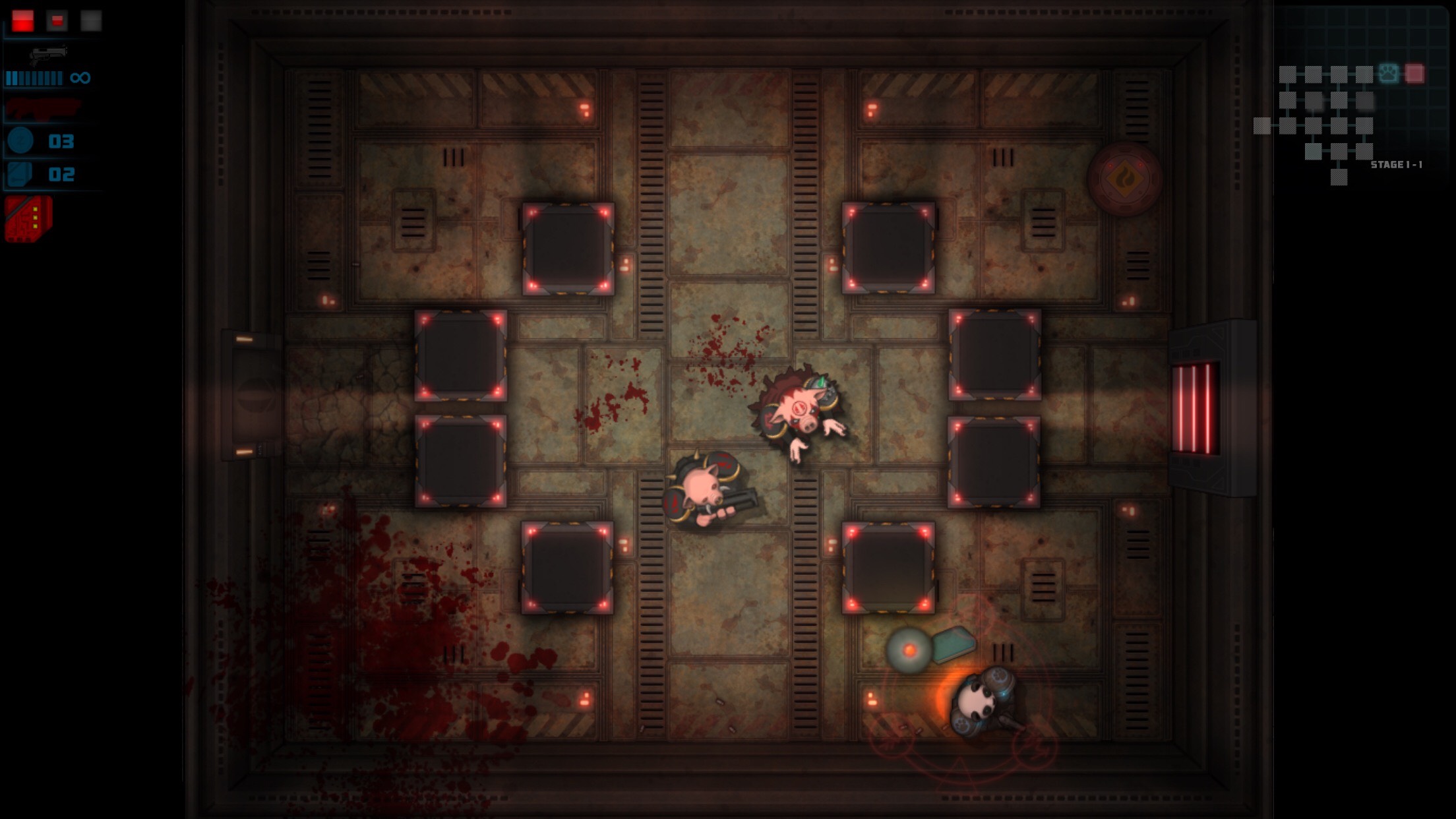 There are a few other tricks up your sleeves, though. First of all, every gun uses clips. When the clip is empty, you’ll automatically reload, but if you want to do that manually ahead of time, simply flick horizontally with your right thumb. You can cycle through weapons by flicking up and down, and do a combat roll with a swipe. The latter is a very important move for getting away from bouncing grenades. It can sometimes be a little tricky keeping those moves separated, but if you have an MFi controller, you’re in luck. Even though it’s already good enough with the touch controls, Feral Fury works beautifully with a controller. I wouldn’t call it an essential tool for survival, but it certainly doesn’t hurt. There are optional virtual button controls, but for whatever reason, they simply weren’t working for me.

What makes Feral Fury work is how satisfying the action feels. You have to develop skills to survive, and you can’t afford to be idle when danger is afoot. The sound design helps out a lot, as the cooler guns have a really nice oomph when you fire them. Powering up your character and making your way through the story mode is a fun challenge, but to tell the truth, I had the most fun with the daily challenge. The random curse was sometimes devastating, but always fun to work around. I also appreciated the relatively large variety of traps, items, and obstacles. I felt like I was running into new situations all the time, rather than just pieces being reassembled in a different sequence. On a pure mechanical level, this isn’t my favorite twin-stick game on iOS, but taking all of its elements together, Feral Fury is something worth noting. 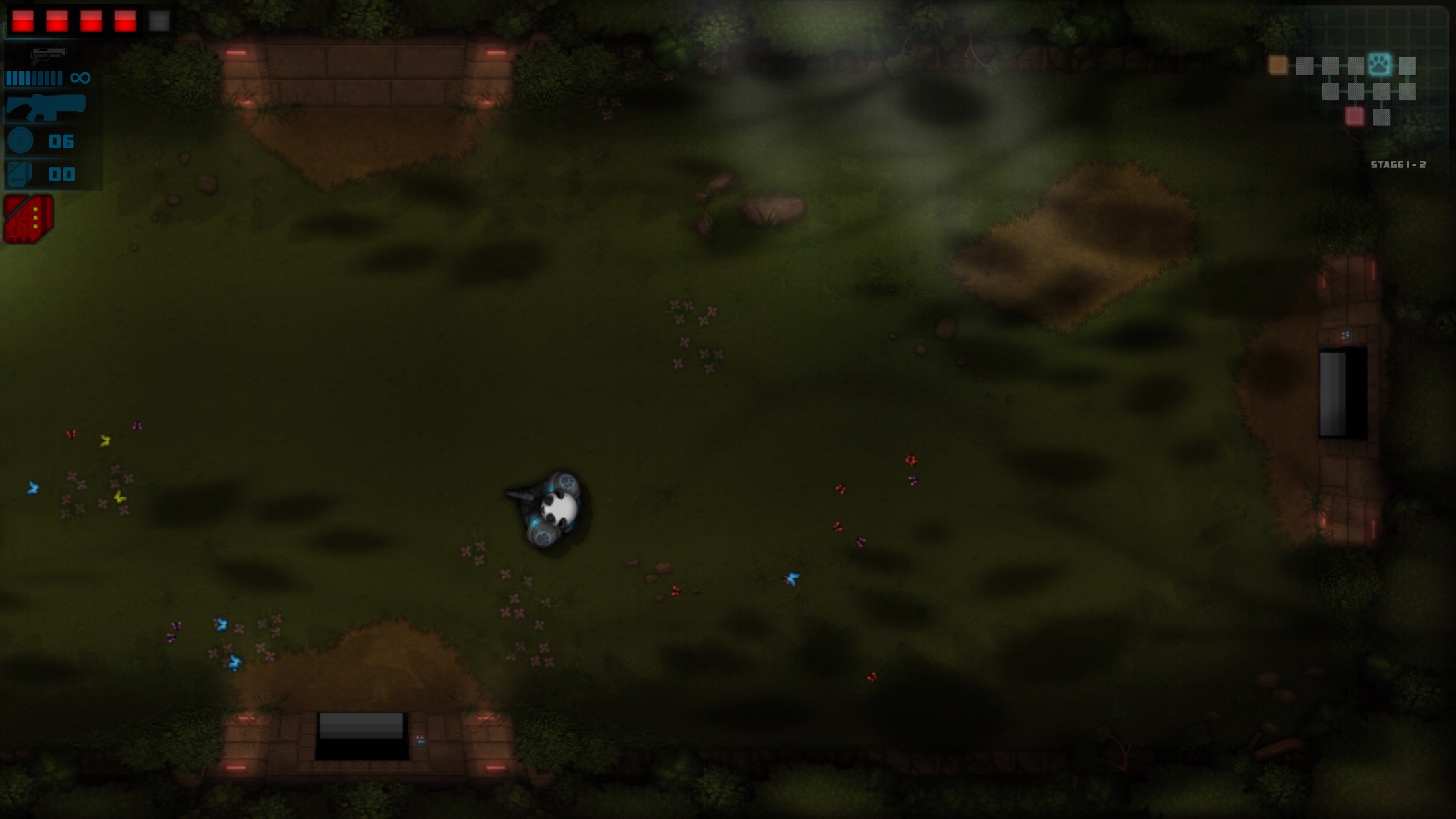 The presentation is quite good overall for a game of this scope, but one problem is how dark everything is by default. I know that’s part of the game’s atmosphere, but it really is hard to see things in many of the levels. Guns and other items don’t stand out as strongly as they ideally could, and although you can turn up the brightness in the options menu, it’s still easy to miss things against the backgrounds. It sometimes takes a second for items to spawn out of destroyed crates, so make sure you look carefully before running off to the next room. Other than that point, Feral Fury comes off well. The game even offers cloud saves, something I wish was standard in this day and age.

While the upcoming release of Binding of Isaac means that Feral Fury won’t have the iOS pool to itself anymore where this type of game is concerned, I think there’s still a lot of value in the game as an alternative. Certainly, any game that goes over this well with our forum members clearly has something good to offer. Give Feral Fury a little time to get its teeth in you, and you’ll find an excellent, challenging action game that’s well-worth playing for hours on end. If you pick it up, don’t forget to stop by the thread in the TouchArcade forums to share your thoughts with the community.