Empyrean ($5.99), one of the recent releases of prolific gamebook publisher Choice of Games, doesn’t start off on a good foot. Major events are happening to your character before you can even get your bearings, and it feels like the story is telling you a lot more than it’s asking you. It doesn’t help matters that the game’s primary setting, the dieselpunk-styled city of Actorius, has a lot of lore to explain. The whole thing comes on a bit too strong initially, and I had to force myself to push through it in the early going. Give it some time to unfurl a little, however, and Empyrean proves to be great fun. It’s a pulpy thing, to be sure, but it’s high-quality pulp. I ended up enjoying it so much that even though this is one of the longer ChoiceScript games I’ve played, the time seemed to fly by.

You take the role of the somewhat rebellious child of the Dominicar, a high-ranking member of society who is responsible for assembling much of the technology that allows the government of Actorius to hold power and defend the borders. Dominicar didn’t just pull this technology out of thin air, however. Underneath Actorius lies the apparent ruins of a past civilization, one that was extremely technologically advanced. This underground area full of machinery and electronic wonders is called the Deep Tech, and it serves as a focal point for much of the game’s events. Some want to plunder it. Some want to destroy it. A few even call it home.  But most of the citizens of Actorius go on about their lives without paying it much heed. They have their own problems to worry about, you see. The rapid shift to an industrial society has put most of the populace at the mercy of corporations, and the conditions for workers have become bad enough that a rebellion has sprung up. On top of that, Actorius maintains the shakiest of cease-fires with the people on the other side of its borders. If this is starting to sound like a powder keg waiting to explode, you’re right. 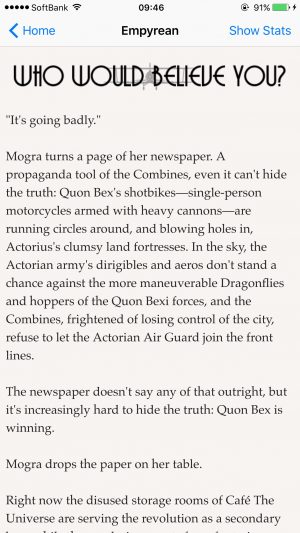 What ignites it all is when your character, fitted with a special piece of tech by your father, ends up being the only that can pilot an experimental aircraft called the Empyrean. This powerful aircraft will end up being a symbol in Actorius, as will its pilot. But what kind of symbol will it be, and how much will the people really know about its pilot? Those details are up to you. You’ve no choice but to throw in with some of the factions that are bristling one another’s nerves, and while your identity will be a secret at first, how long it stays that way depends on how careful you are about keeping that secret. In my first run through, I guarded my identity cautiously, acting like an utterly pampered fool in my civilian identity, all the while building my reputation as the Empyrean’s pilot, a Scarlet Pimpernel-style act that proved to be extremely satisfying. Throwing your identity away has its advantages, though. It’s certainly easier to keep up some of your relationships if you’re living honestly, and you might find it easier to use your societal weight to its fullest extent if you don’t care about anyone sussing out your secret.

The length of Empyrean‘s story works heavily in its favor. It allows you to participate in a number of minor misadventures, which helps build the feeling that you are a presence in this world. It also means that your reputation feels more earned, since you don’t just slide into the scene one minute and accept the adoration of the people the next. The biggest benefit, however, is that it gives author Kyle Marquis time to build his world and characters fully. As usual for a Choice of Games release, there are a number of characters you can romance, and you can play any combination of gender and sexual preference that you like. Where Empyrean rises above the usual fare here is that all of these potential partners feel both like a useful part of the story and believable romantic partners. No one is thrown in, no one is extraneous, and every relationship feels like a natural fit for the story. That is an incredibly rare trick to pull off, and it pays dividends in Empyrean.

It’s not just the potential romantic partners who are well-written, however. The cast includes a number of interesting characters. You’ll want to know what the story is behind many of them, but you’ll have to settle for some vague tidbits in a lot of cases. The events of a life can’t be easily summarized, after all, and your character is a very busy person. You’ll get to know the people, you’ll get some hints about why they are the way they are, but for the most part, you’re left wondering about the finer points. There’s something very real to that approach. You also can’t please everyone on a single playthrough, as some characters are at philosophical odds with others. The desire to learn more about the people you have to leave out on the first playthrough provides a powerful impetus to take another run or two at the whole thing. 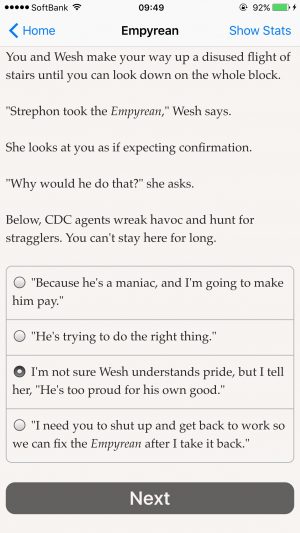 To go with that, you can actually sway the story a fair bit in Empyrean. Certain events have to happen, of course, but you’re given a great deal of control in exactly how these things play out. Your choices feel meaningful, no matter which way you opt to go. While the game will push you along in certain directions, it never directly throws away any decision in such a way as to leave you feeling empty. The decisions you make factor into the moment-to-moment gameplay, as each choice has the potential to alter your stats, which in turn will determine the success or failure of future choices. The road you follow also has a big effect on the ending you receive, too. There are a lot of ways things can wrap up for the city of Actorius, and how the Empyrean’s pilot behaves is a major factor in that split. Do you take care of the workers at all costs? Throw in your lot completely with the rebels? Are you a patron of the arts? Or do you crave the mystery and fortune that could come from exploiting the Deep Tech? Some of the endings feel worse than others, but they all do an excellent job of bringing your story to a close.

The way the stats are set up is a bit unusual, but the method used here also seems to nudge towards greater replay value. There are ten traits, but they’re posed against each other in such a way that you can really only excel at half of them in any given game. If you choose to be cunning, it will cost your leadership ability. Put an emphasis on being sensitive, and you’ll be less tech-minded. It doesn’t make much sense to have these traits in opposition to each other, and that might chafe some players. What it ended up meaning to me was that I had to play to whatever I had decided to emphasize. It’s a peculiar way to force players to role play their character closely, to say the least. But it also means that your opportunities are going to be quite different from game to game, depending on which traits you opt to focus on.

The setting and characters in Empyrean are the sort that you want to get to know more of, while the situations you find yourself in sometimes feel like a cross between Batman and the Rocketeer. It takes a while for all the pieces to get into place, but once they do, this is simply a fantastic romp through a highlight reel of great moments in pulp fiction. Even though I secured a happy ending, when I reached the final page, I was sad that there was no more. For a gamebook that exceeds 300,000 words to leave me feeling that way, I’m not sure how I could do anything but give a very firm recommendation, no matter how slowly it starts.