The original Fieldrunners ($2.99) was one of the first major indie hits on the App Store, and instigated numerous attempts at emulating Subatomic Studios’ success through an abundance of similar tower defense titles. However, the first game in the series released over eight years ago (sorry for making you feel old!), which is a massive amount of time both in gaming as a whole, but especially in the fast-moving market of iOS gaming. Simply creating more iterative sequels like Fieldrunners 2 ($2.99) simply wouldn’t work in the App Store of 2016, so Subatomic have flipped the formula on its head for its newest entry in the series. In Fieldrunners Attack! (Free) – which is now available for free worldwide on the App Store – you are now tasked with raiding defensive structures, as well as having to consolidate the gains made from such sieging activities, which sounds like a lot of fun for those disillusioned with typical tower defense action. 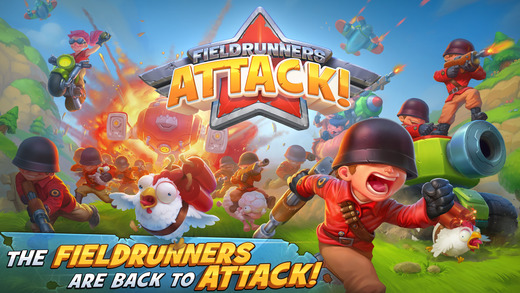 Anyone who has been following the progress of the newest Fieldrunners game may be a little confused by this release, as Subatomis Studios previously soft-launched an extremely similar title called Fieldrunners: Hardhat Heroes in collaboration with Flaregames. It turns out that Fieldrunners Attack! is essentially the same game (apart from the obvious minor differences from the increased development time) but this time published by Subatomic Studios themselves. Either way, it’s great to see Attack! finally launch worldwide off the back of its own soft launch last month. With a whole host of solo missions to overthrow the nefarious Mootilator in the game’s campaign mode, and the typical arsenal of eclectic weapons – both brand new variants and classics from previous titles in the series – Fieldrunners Attack! should be a lot of fun for anyone looking for some real-time strategy action during the upcoming holiday season. Download the game for free on the App Store now, and head down to our forum thread for more discussion on Fieldrunners Attack!!