To be honest, I thought the day would never come when we would play Party Hard on mobile. The game had been announced for mobile a long time ago, but its PC release came and went with nary a mention of the mobile version. The game’s publisher tinyBuild, is typically very open about what they’re working on, so them being hesitant to show off what would become Party Hard Go ($6.99) was certainly odd. I wondered if the game even existed at some point. Like, I doubted that tinyBuild would be oddly skittish on this one’s existence when they’re so open with everything else, but it did seem odd. Well, after some work adapting the game and giving it a Go in the name, their murder simulator is finally here. And, well, it’s a unique game, but one that has a lot of oddities to it. 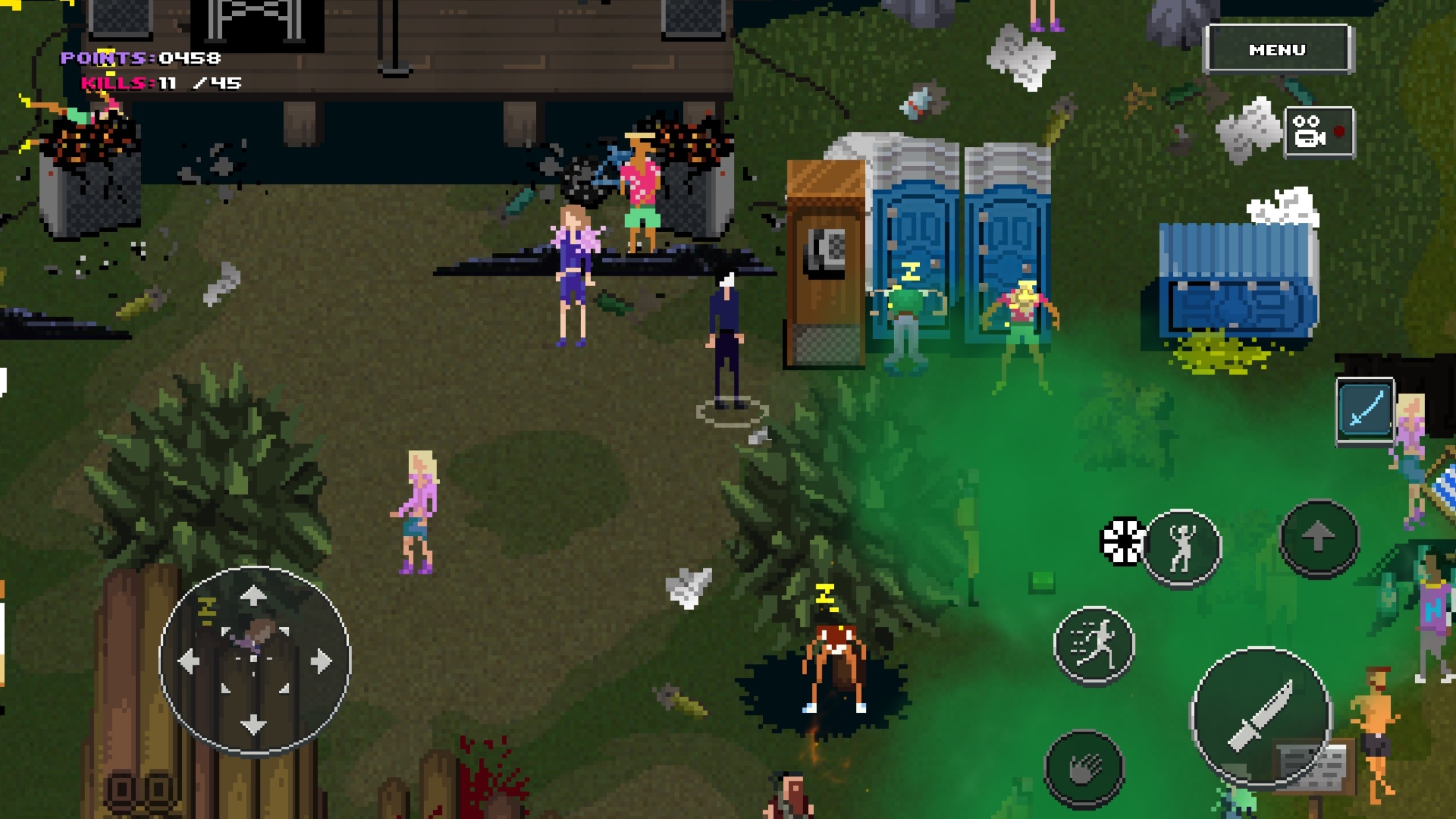 The objective of Party Hard Go is to kill everyone in the level. They’re partying, they’re being loud, you hate that, so you’re taking extreme measures to do so. Stealth is a tenet of the game, where you want to make sure your murders aren’t seen by other people. Carrying dead bodies around will arouse suspicions and get the cops chasing you Benny Hill-style, so throw them in dumpsters, off of the roof, or into the wood chipper. Various traps will also help out, such as blowing up speakers, poisoning the punch bowl, and starting a car to run over a bunch of people. There are levels with fixed layouts, but some traps and elements such as people you can call in to the party to help with the mayhem, are randomized.

The best and most frustrating part about Party Hard Go is the way that randomness plays a role. Get stuck on a tough level? Well, maybe this randomized round will net you a zombie outbreak. One round might spawn a car in the right place this round. The different varying elements mean that sometimes you’ll succeed because of a certain trap will be available to you that can take out a lot of people. The phone calls that bring in the exterminators spraying the bug poison are a particularly useful tool. One forest level has a buzzsaw that is handy for taking out anyone that steps near it, picking up sleepers to their doom, or taking out dead bodies. Interestingly, carrying a sleeping person isn’t necessarily fishy (unless they wake up and knock you around for carrying them), but people will freak out if they see you carrying a dead body. You have to decide when it’s the right point to start the indiscriminate murdering by thinning out the herd of potential witnesses that could call the cops. 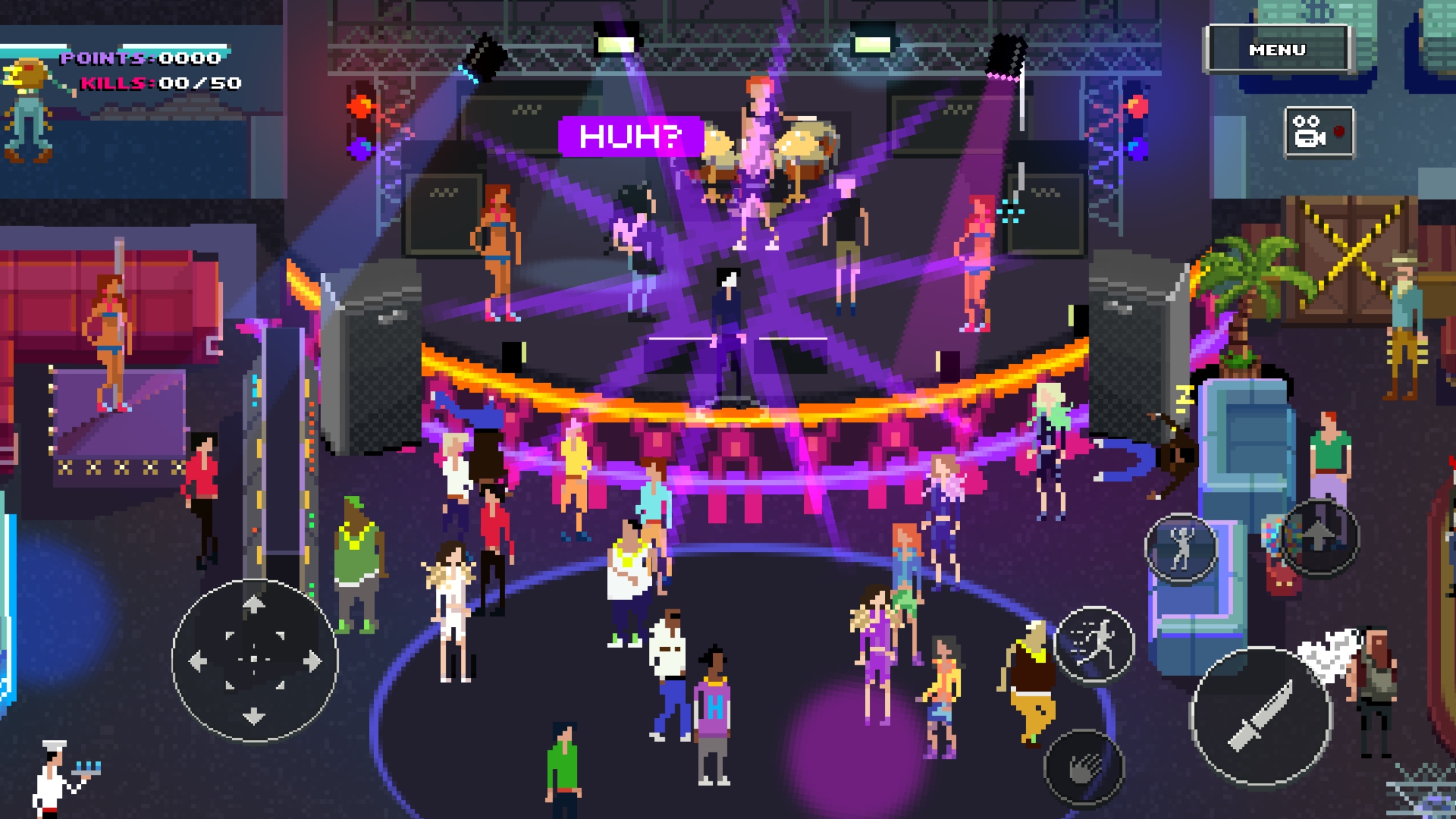 Escaping the cops or taking them out is extremely difficult, and requires luck or good timing with triggering traps on them. Later forms of law enforcement will prove more difficult to shake. But part of the game is based on luck of the draw, so I’d just take this more as the chaotic experience it is rather than anything you can strategize too much. Your sprint recharges slowly enough that you can’t outrun the cops for too long (though this is a good reason to keep a trap or two unsprung for when the cops do come).

The game requires an interesting approach to each level, because you have to scope things out. Where can you get quick kills and body disposals? Which traps are at my disposal? Any escape routes available? Why is that man fighting that bear? Party Hard Go sits somewhere between deliberation and chaos. You have to play slow at times, picking off targets and taking risks if you don’t want to be chased by the cops – and your sprinting is limited, so that’s probably for the best if you aren’t in that situation. And as the party starts to whittle down in numbers, the goal can be in your grasp, as you decide to just go on a murdering spree now that you can clear everyone out without much more hassle. And sometimes, you’ll get a nice trap that takes care of a lot of trouble for you. But do you want to use those traps to thin the herd quickly, or to get you out of a sticky situation with law enforcement? You have to decide, and even adjust from session to session what you have available to you. 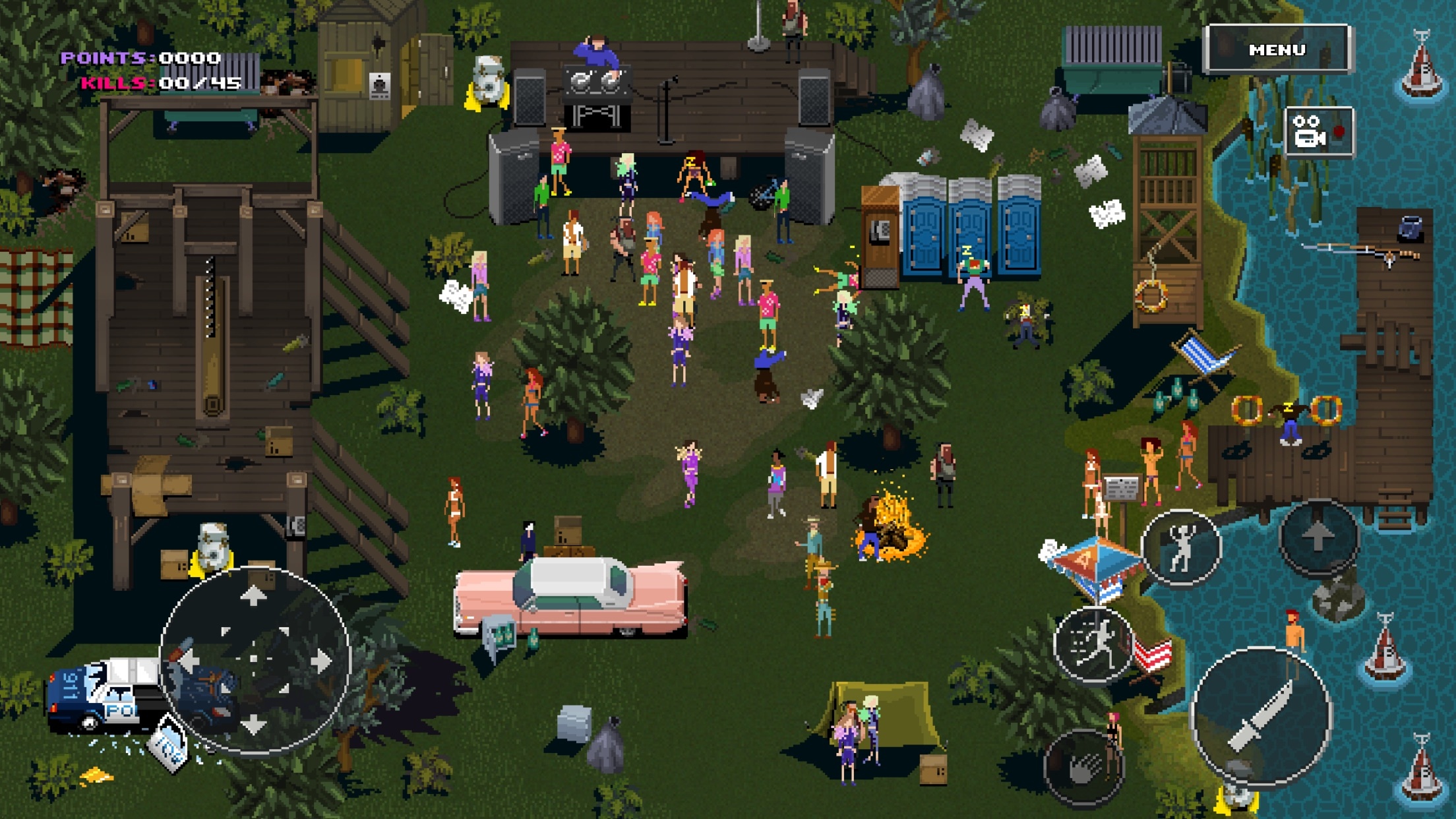 I will say that the whole game is kind of sloppy and sometimes contradictory. The line between detection and escape is slim enough that you really don’t want to have to deal with escape at any given point. It’s best to play smart and slow (and the game doesn’t seem to have any real time reward for fast play – which I actually kind of like), take your kills when you can, and just lay low until everything blows over. It does mean that the most thrilling moments are the most troublesome, like when you have to kill someone before they can call the cops. If the game offered more powerups more often from the mysterious stranger that rolls around every so often, or had traps be more effective, then perhaps the game would be a little more interesting in terms of the combat. As it is, the experience just winds up feeling like a weird contradiction: a goofy game that forces you to not be that goofy and chaotic in order to do well.

I guess that sloppiness in gameplay does fit Party Hard Go quite well, though. The whole premise of the title goes between its absurd gameplay, which has you committing mass murder in crazy ways, but then the narrative sections between the action make things serious and weird. Like, the gameplay has you tossing bodies to sharks, and watching aliens abduct people. It’s silly. Then the story talks about a cop whose daughter died, or something. The description calls it a “(not)serious" story, but this is the kind of concept where the player needs to be as detached from it as possible. The game gives you all these ridiculous scenarios, and then makes you feel guilty for trying to get into the fantasy of the concept. And it’s not in a clever way that Hotline Miami was able to make you feel guilty for its violence. Perhaps the story is just trying to replicate this over-the-top nature of it, and just doesn’t display enough self-awareness to be satirical. I can’t tell if the voice acting is meant to be intentionally bad or is just kind of over-acted. This game is just so tonally bizarre, or unique, at least. 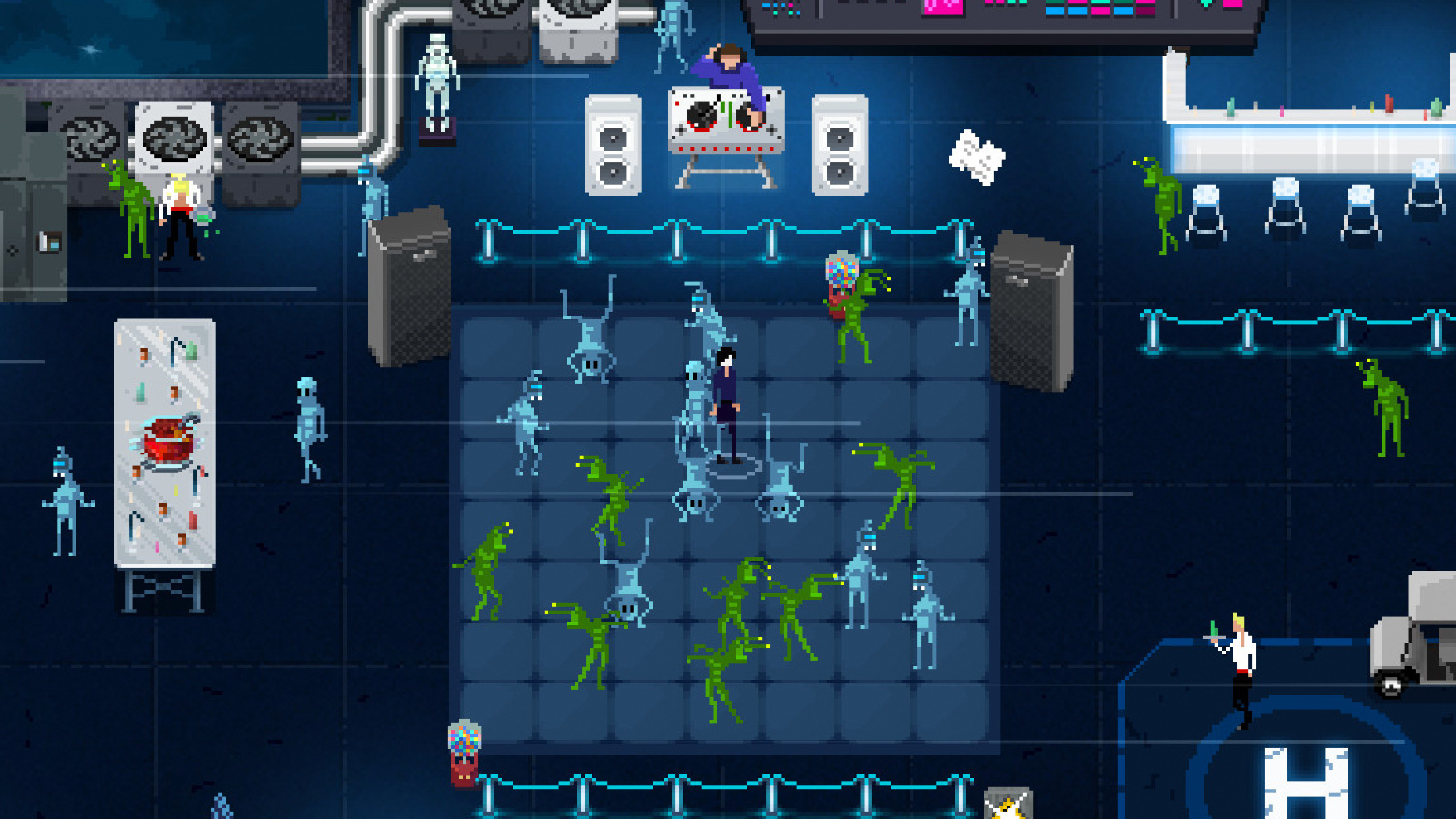 Honestly, I’m not sure what the huge fuss was with adapting this game to mobile, because it works fine? There aren’t a whole lot of controls, the game works fine with a virtual stick and buttons. Perhaps figuring out how to make the game scene work on mobile was the concern, since the entire game is viewable at once on desktop. Perhaps there were technical concerns with making zooming work? Why this was such a big deal to adapt it to mobile seems odd in retrospect, but perhaps it’s just a testament to the work put in that it all works okay. While I feel like the virtual controls work the best, you may prefer the tap-and-gesture controls, which at least try to make the game work as more a touch-native experience. They work fine on the phone, but on the tablet I think I prefer the virtual controls, for sure. The game does work fine on my iPhone 6 Plus, so I wouldn’t worry too much about any kind of performance issues. I do welcome the support for video recording and streaming via ReplayKit, along with iCloud synchronization between devices.

Party Hard Go finally hitting mobile feels like a big deal since the game was so iffy on hitting mobile. And here we are. It’s a unique game, from its ultraviolence, to quasi-stealth gameplay, to its…well, unique themes, let’s put it that way. It’s a one-of-a-kind game, nowhere near excellence, but if you’ve been intrigued to give it a shot, why not do so now on mobile?