At this point, a holiday release from Rockstar on the App Store is beginning to become tradition, and I really couldn’t be happier. This year’s addition to Rockstar’s mobile catalog is Bully: Anniversary Edition ($6.99), celebrating the ten year anniversary of the original 2006 launch. Lots of folks in our community suspected that Grand Theft Auto: Vice City Stories would be the next Rockstar game to hit the App Store, but it turns out that the one and only bigfart12 guessed correctly all the way back in March. Bully always seemed like the “forgotten" Rockstar game, at least amongst my circle of friends. It was released sandwiched in between Grand Theft Auto: Liberty City Stories ($6.99) and Grand Theft Auto: Vice City Stories. I think it was close enough to the GTA formula that anyone interested in Bully likely just gravitated to either title instead. I suppose it also didn’t help that literally everyone I know who was even remotely interested in video games was hard and heavy into World of Warcraft at the time either. Anyway, it wasn’t until the remastered “Scholarship Edition" was released a few years later that I gave the game a try, and had one of those “Wait, what the. Why didn’t I play this when it first came out?" epiphanies that often come with re-releases of games you heard were good but never actually got around to playing. The mobile release is technically a second remaster of the game, as Bully: Anniversary Edition comes with all the tweaks of Scholarship Edition, plus additional graphical effects, higher resolution textures, better lighting, and a new multiplayer mode, effectively making the mobile game the best version yet- At least until it’s remastered a third time. 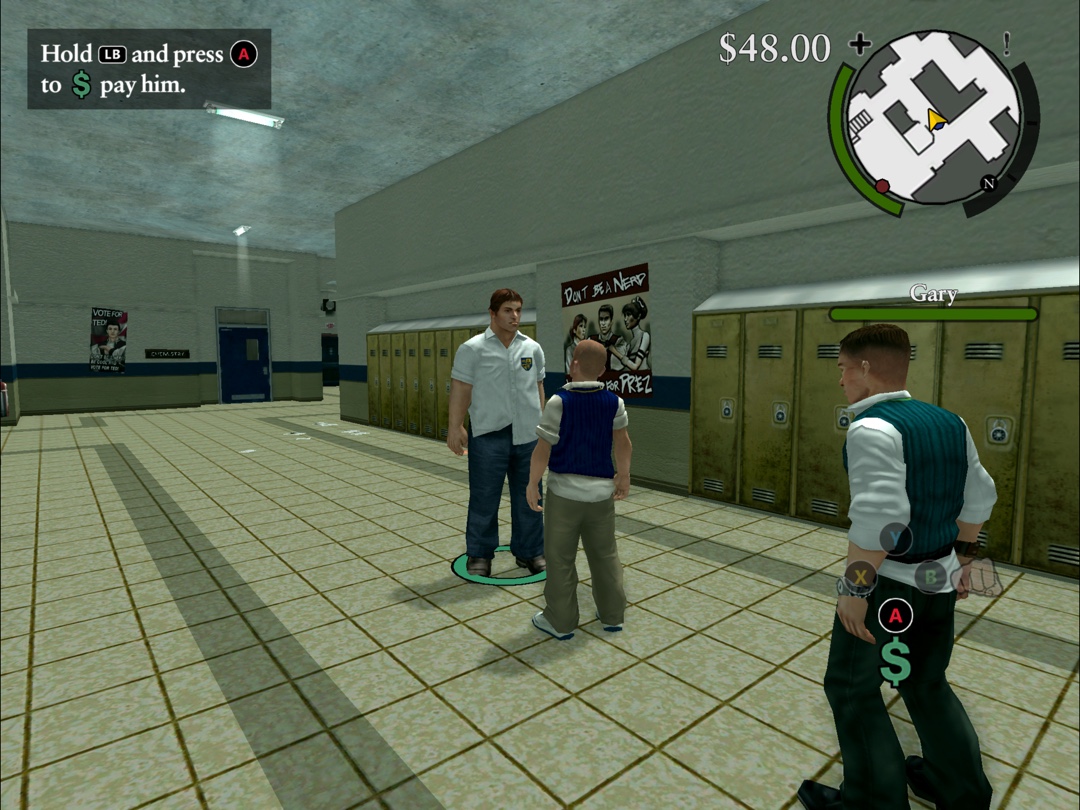 Taking a step back, let’s assume you’ve never heard of Bully before (which, again, is totally reasonable since it isn’t really a Rockstar flagship title). Bully is an open world third person adventure game where you play as a kid named Jimmy, set at the private boarding school, Bullworth Academy. The game’s original marketing lead quite a few people to believe that gameplay orbited around, well, being a total bully and generally causing loads of violence in the school. Jack Thompson (Remember him?!) even took a crack at getting the game banned, comparing what you do inside the game to the Columbine High School massacre. In actuality, while you’ll eventually engage in loads of light spirited mischief, the overall goal of the game is to effectively bring peace to Bullworth, uniting all the various cliques, and completing tasks along the way to raise your reputation and effectively get everyone to like you. 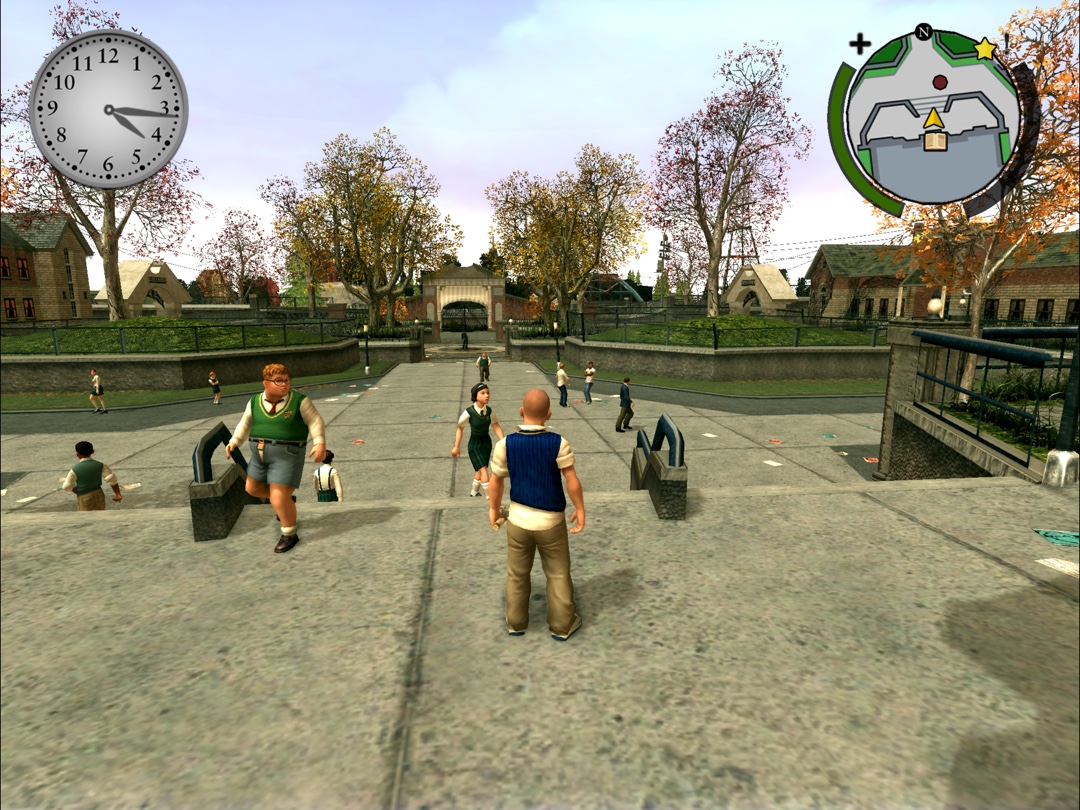 Anyway, as mentioned, Bully opens with your not-so-loving mother and her new husband dumping you off at Bullworth Academy before they go on their honeymoon. From there, the game quickly shows you the ropes and introduces the main cast of characters which includes the stereotypical headmaster, Dr. Crabblesnitch, and your two cohorts Gary and Petey. The tutorial is guided by Gary, and it quickly becomes apparent that Bully is effectively Grand Theft Auto, but without cars. (Although you do eventually get skateboards, scooters, and similar kid-friendly transportation.) Movement feels very similar, combat is also incredibly familiar, as is the cadence of the game which involves going somewhere, accepting a mission, watching a brief cut scene, then needing to go somewhere else, fight someone, collect something, or do other similar stuff. This may sound like a negative thing, but I actually really like how familiar it all feels. If you’ve mastered the various little nuances of GTA games, you’ll be right at home inside of the world of Bully. 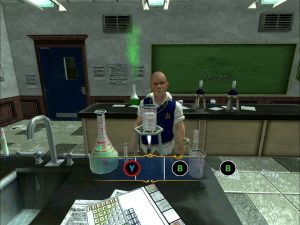 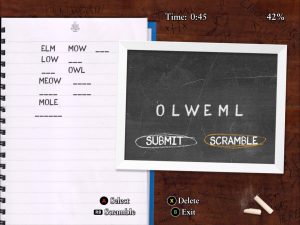 Of course, being at school, you also have to go to school. The daily cycles you go through really makes it feel like you’re at school, as even though you might have a breadcrumb trail of missions to do to advance the story, you still need to attend various classes at specific times of the in-game day. This potentially means dropping what you’re doing, and hauling ass across campus to make it to class in time, before resuming whatever hijinks you were up to. “Attending class" involves several different mini-games. For example, Chemistry has you pushing buttons in order rhythmically to conduct experiments while English has you making as many words as you can out of scrambled letters. You also need to be in bed every day too, and both morning and afternoon periods as well as your eventual bedtime does a great job at not only adding a familiar sense of urgency in getting things done in your free time at school, but also gives a fantastic sense of the passage of time. 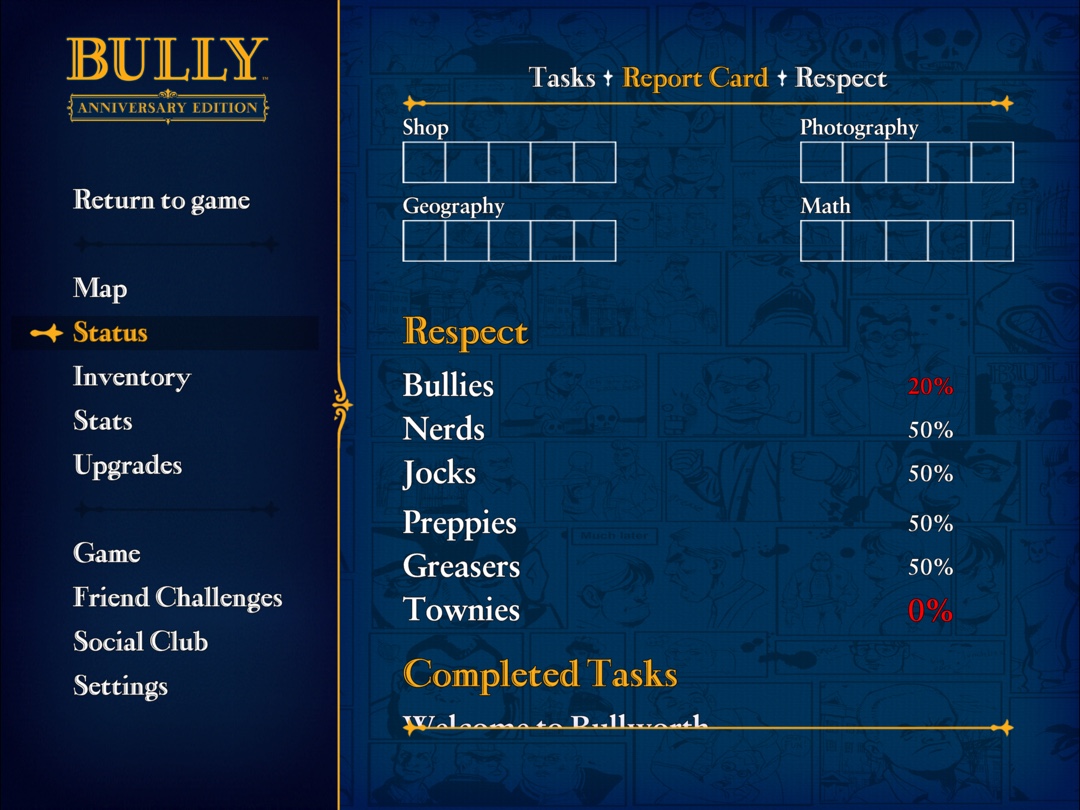 Also, just like being at school, all the stereotypical cliques are represented. You’ve got nerds, preps, jocks, greasers (which I’m not sure are a thing anymore?) and of course, the bullies. Depending on what you do on particular missions, completion results in your notoriety with these various factions going up or down. It weirdly feels just like being at school again, as, for instance, the nerds love it when you do something to mess with the jocks and vice versa. The cops and wanted levels from GTA games are replaced with prefects and a “trouble meter." Generally speaking, you can get away with little stuff, but if you cause too much trouble (or cause trouble in front of a prefect) your trouble meter will rapidly rise and you’ll need to run or get busted. Just like in GTA, it’s also a lot of fun to just cause lots of trouble and to see how long you can survive and how many prefects you can fight before getting busted. 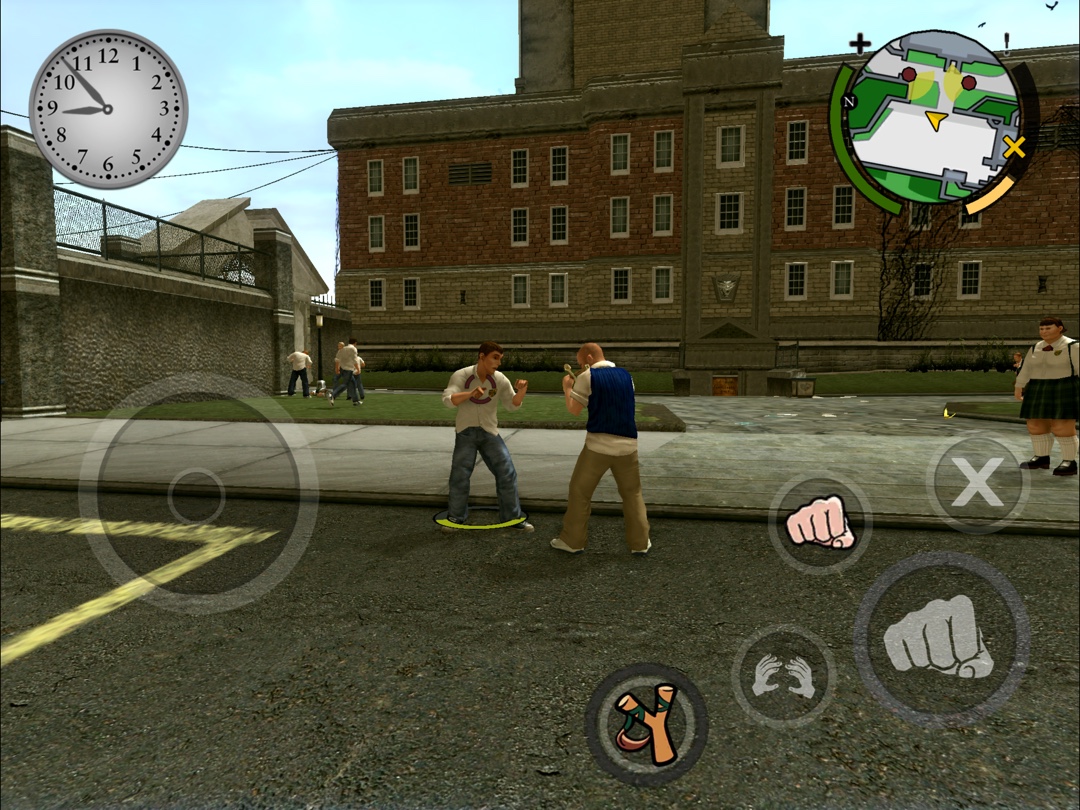 Much like GTA, combat is fairly simple. Most of your fighting in Bully will be hand to hand, and you’ll learn numerous different fighting techniques by completing side missions. Guns are (obviously) replaced with simple thrown objects or age-appropriate weaponry like slingshots. The same familiar lock-on system is used, where aiming is automatic regardless of whether you’re doing ranged or melee attacks which whatever target you’re latched on to at the time. Bully takes GTA-style combat one step further with additional moves like being able to grab, push, and throw your opponent as well as various other techniques which spice up fights a bit more than just mindlessly mashing the attack button. 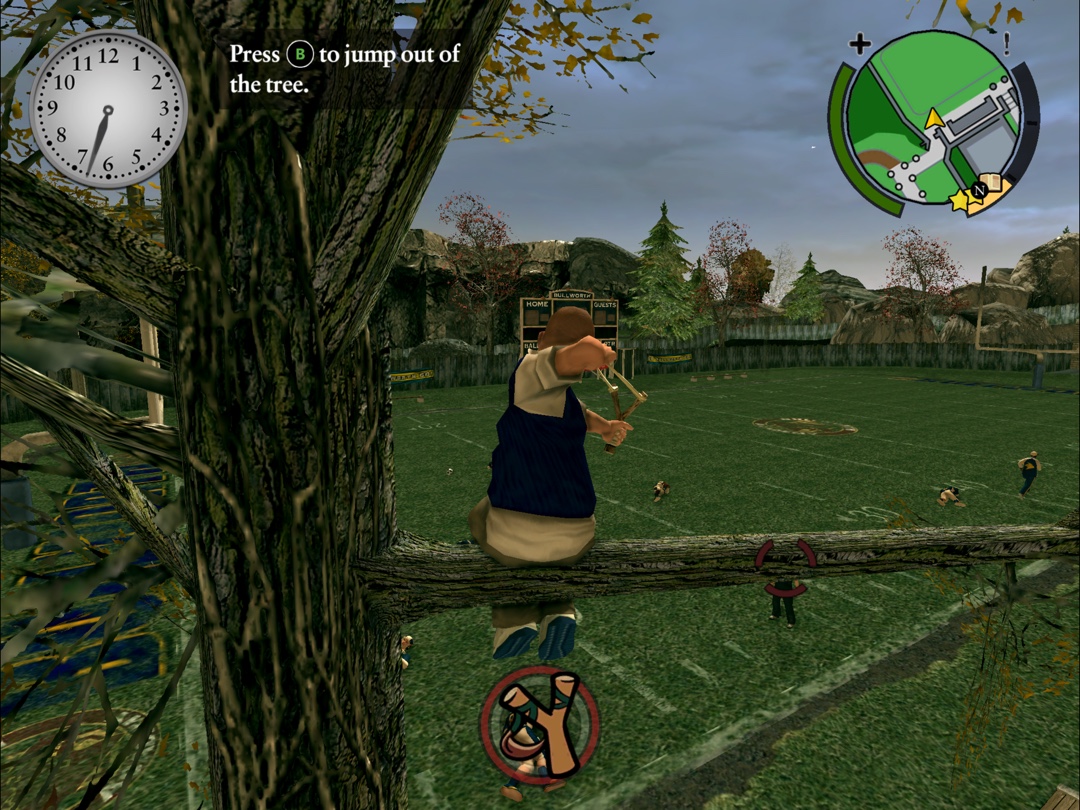 Like other Rockstar titles, the level of depth found in Bully is rarely something seen in single player premium games on the App Store. The initially tiny world of Bully opens up into five large areas, with all sorts of side missions, a lightweight crafting system where you can create different mischievous items like stink bombs and similar, and the ability to have romantic flings with other characters in the game. Without spoiling anything, while the main storyline is incredibly linear, there’s more than a few twists and turns along the way as you inevitably become king of Bullworth. Every line of dialog in the game is voiced over, and the idle chitchat as you run around the school yard is just as ridiculous as the things you hear people say wandering around any GTA city. The whole thing feels alive. 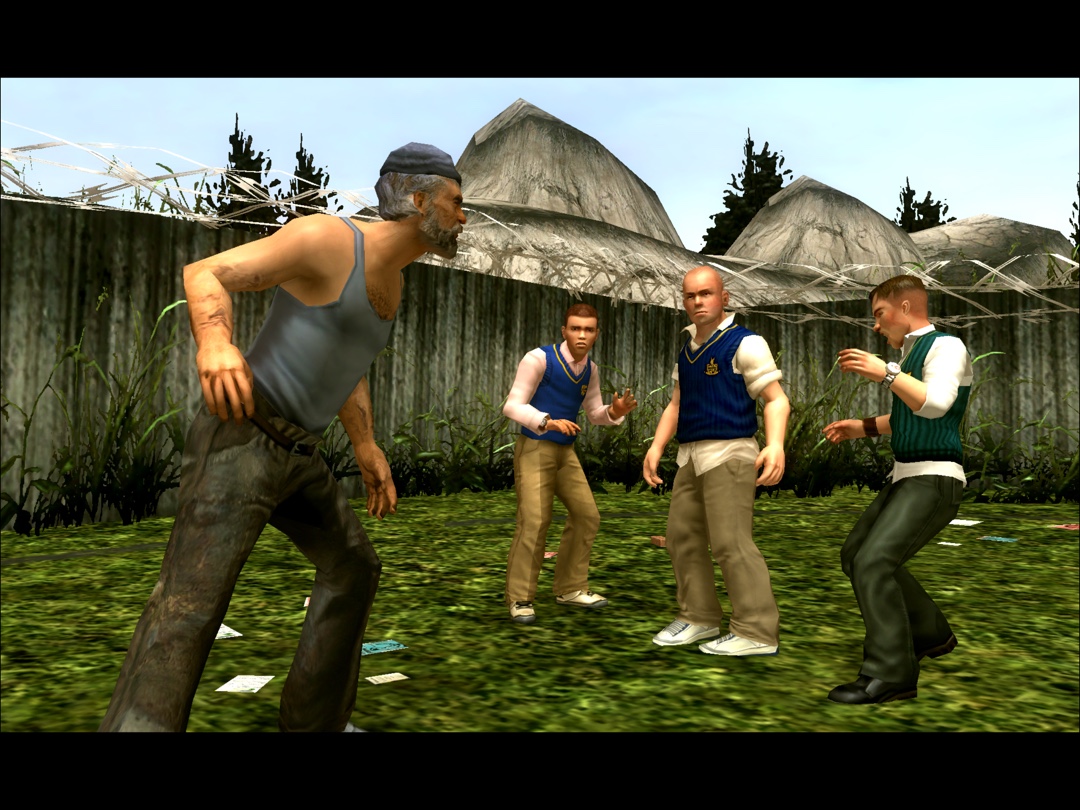 As far as the quality of the port is concerned, Rockstar has done a fantastic job. Utilizing the assets from the previous rework of the game combined with higher resolution textures and other graphical boosts results in a game that still obviously is from a previous generation of consoles, but manages to be visually appealing enough to play today. Many older 3D titles look a little rough by 2016 standards, and that’s not the case here. I played it on my iPad Pro, and the game unsurprisingly ran flawlessly, but if you’re playing on an older device there’s options to lower the graphics settings to get higher framerates. Just like other Rockstar mobile games, Bully features a cloud save system through the Rockstar Social Club. This review was based on an early copy of the game, so I wasn’t able to test any of them, but they’ve even gone as far as to turn the different school class mini games into turn-based online multiplayer friend challenges. Much like cloud saving via the Social Club, it’s just one more thing Rockstar totally could have skipped out on and Bully would still have been a fantastic game. 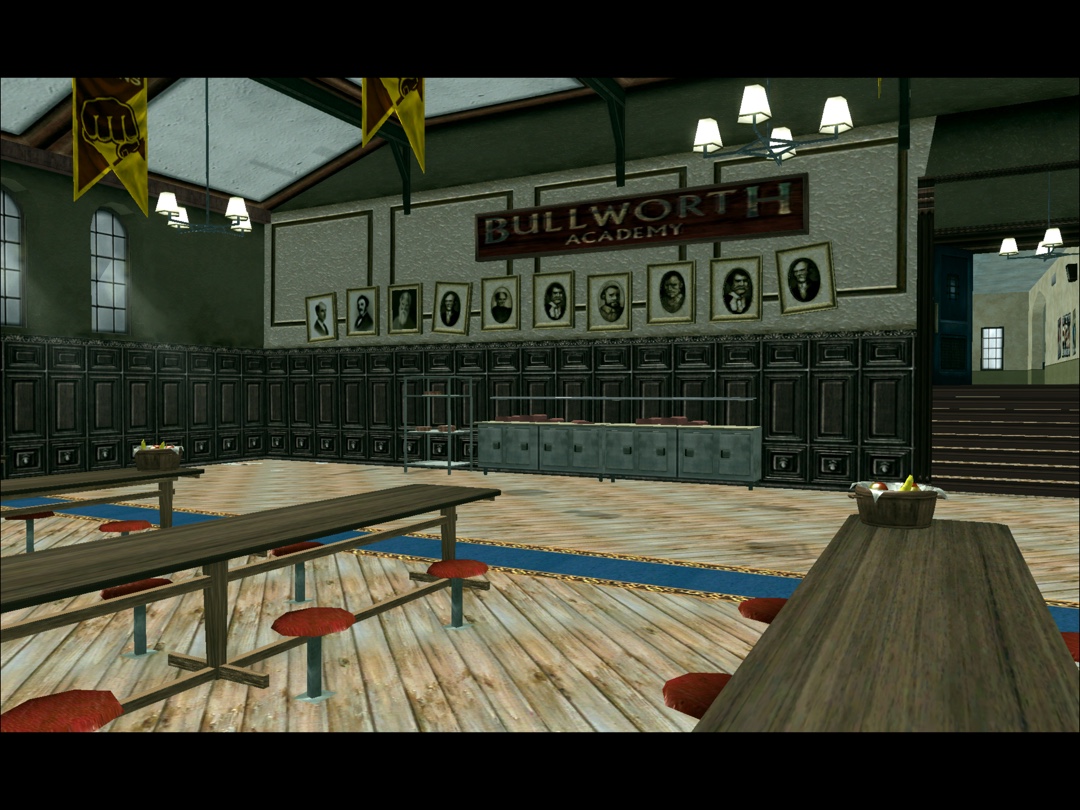 Controls are… Well, they’re about what you’d expect if you’ve played any of the previous GTA games on mobile. If not, they did about as good of a job as they could have making the game work with a touchscreen. Movement is handled via a virtual joystick on the left side of the screen, while an array of buttons on the right side of the screen handle all of your actions. Rarely does the game require much precision, largely thanks to how the lock-on system works in combat, but I did run into a few action-packed sequences that felt a little more difficult than they should have been using virtual controls. Regardless, they totally work. Thankfully, MFi controllers are totally supported and if you’ve got one connected all the clutter of the on-screen UI goes away and the game prompts you to do things using the various MFi buttons instead. While I have no doubts you can play Bully start to finish with the touchscreen, the best way to play this game is definitely going to be with a controller. 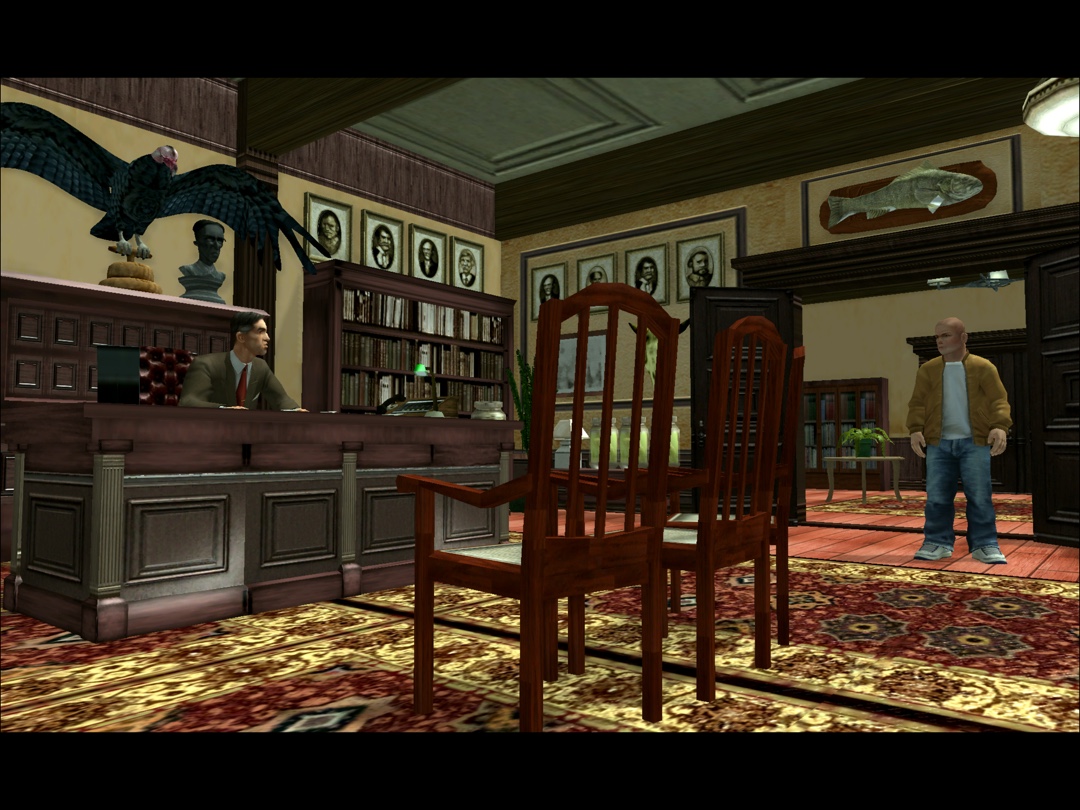 I’m really not sure what else there is to say about Bully. The game, when it was originally released, scored an impressive 87 on Metacritic, and it’s only gotten better over the years with the various visual improvements and minor gameplay additions. If you missed Bully when it was first released on the PlayStation 2, then skipped it again when it was re-released on other platforms, don’t miss this new re-remastered iteration. Hell, I’d say the entirety of the Rockstar iOS catalog is worth owning, and Bully: Anniversary Edition is no different.