While the music/rhythm genre has become somewhat stagnant on consoles, it’s been alive and well on mobile with ports of classics along with new twists to enjoy. Still, it’s been awhile since I’ve enjoyed a tried and true classic take on the rhythm genre. Pianista (Free) is an excellent new title that offers that exact experience with the added benefit of a treasure trove of classical music. In fact, when you combine the well-designed rhythm system with an interesting freemium system, there’s really no reason not to at least check it out. 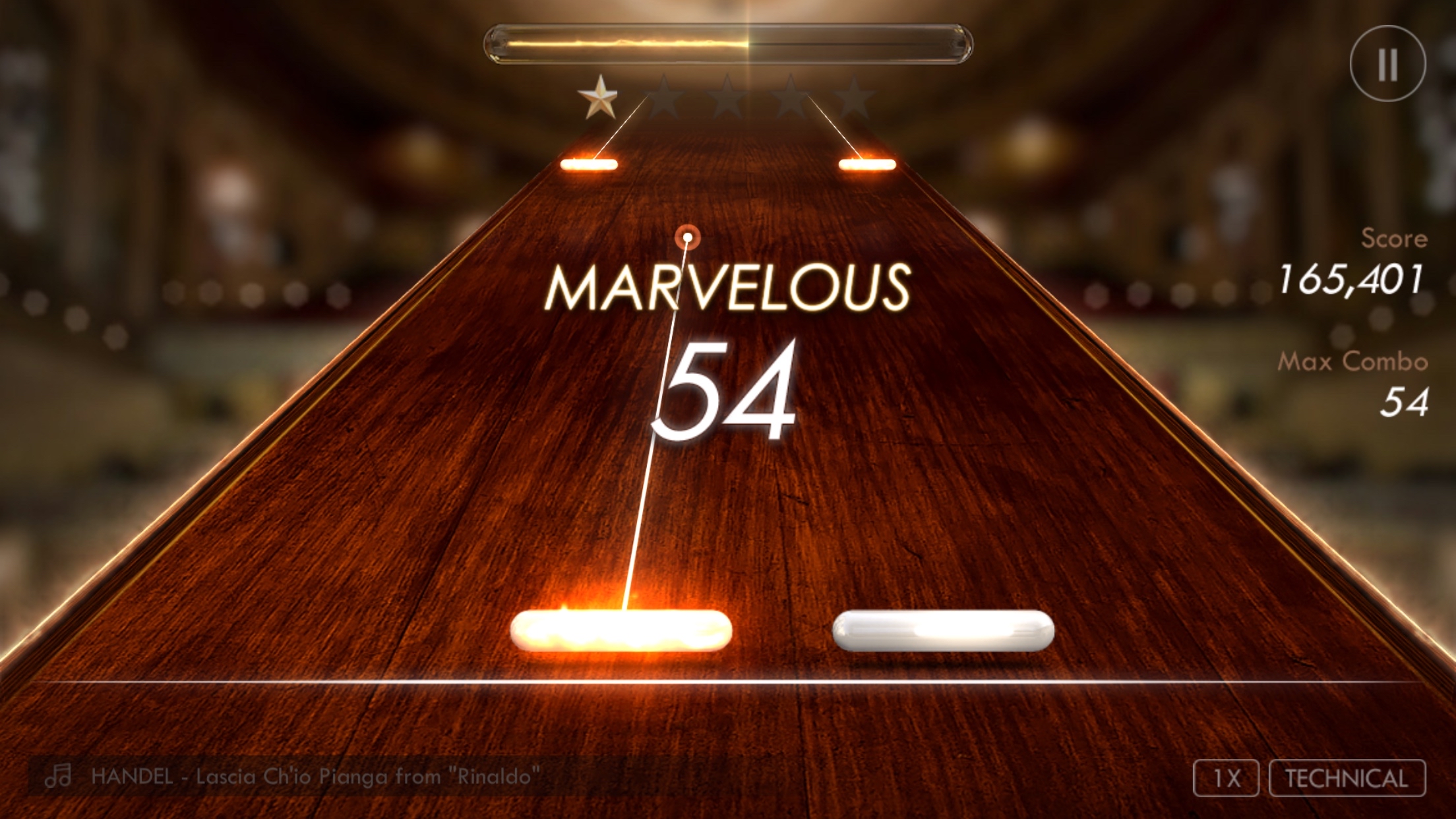 As a rhythm/music game, Pianista harkens back to the classic lane-based gameplay in which you tap notes to the tune of a rhythm. Specifically, there are six lanes to keep track of with taps, single-lane holds and multi-lane holds. While the move-set is limited, Pianista makes up for it with an incredibly responsive engine that is synced perfectly with the music and has no slowdown. It’s a good thing too, because these songs are pretty damn difficult.

Of course, when you consider the classical nature of the song selection combined with the fact that you’re playing the piano sections for each of those songs, it’s really no surprise that Pianista would be difficult. Sure, there are some easy tunes such as Bach’s Minuet, but once you get to Beethoven’s Moonlight or Rachmaninoff’s Flight of the Bumblebee all semblance of easy gets thrown out the window. Thankfully, Pianista’s two-tier difficulty works for the most part, with Normal offering most of the notes for any given song with a large threshold for missed notes. Meanwhile, Technical is an unforgiving mistress with very little margin for error. I’d like to consider myself fairly competent in this genre, but there are a lot of songs that are downright challenging on Technical, which at the very least makes for some decent replayability as you try to master them. 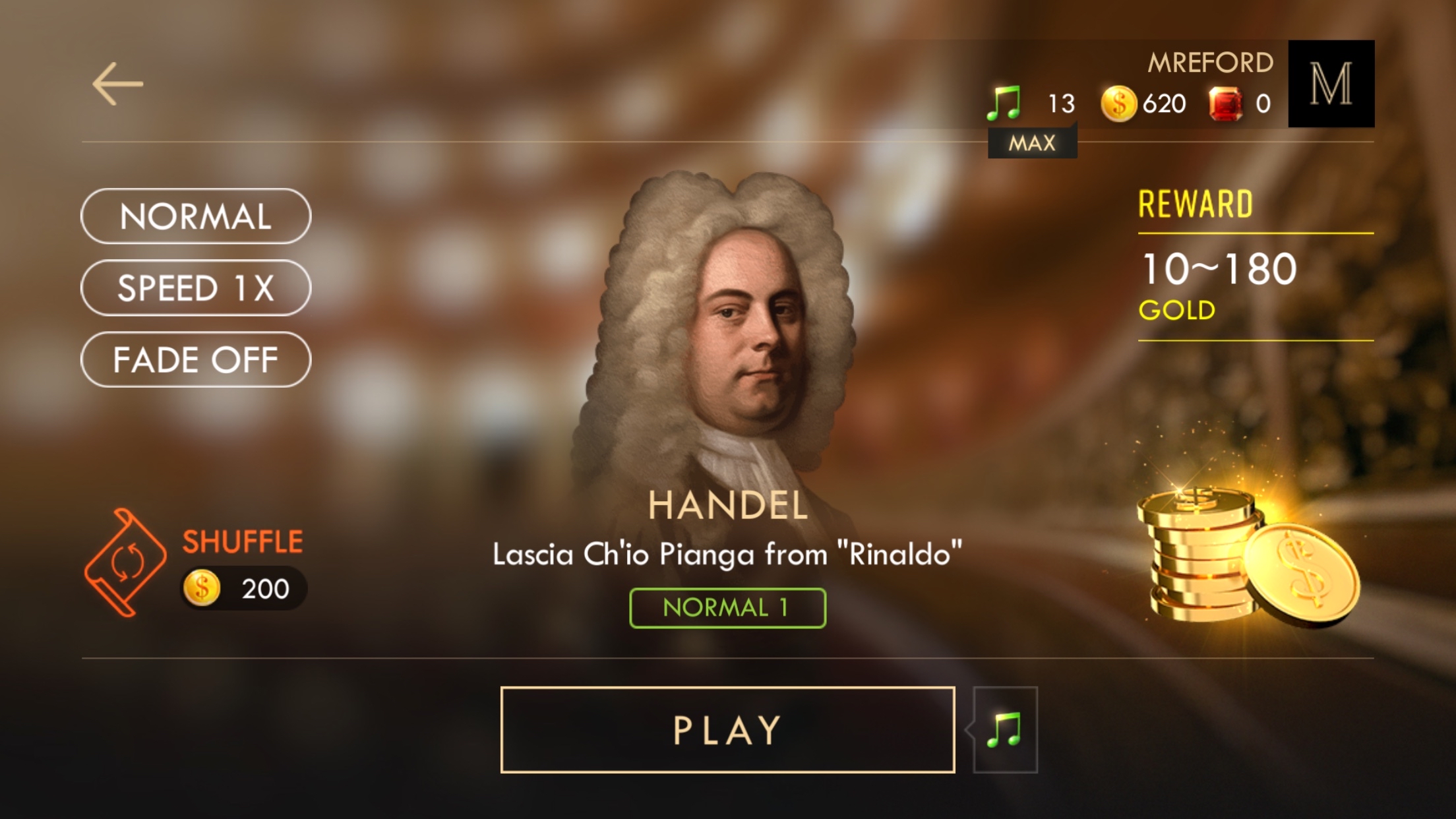 Unfortunately, getting to the songs you want to play may take some time, which is due to Pianista’s interesting freemium system. Players get a certain number of “free songs” with one song being replenished every few minutes. These songs can be cashed in while playing the game’s “Golden Play” mode, which rewards coins for completing songs that are randomly selected. Earn enough coins and you can buy a song in “Collection Play,” which will then let you play that song to your heart’s content. You’ll want to purchase these songs too, because it’s a pretty amazing hit list of classical music from over a dozen artists that you’ve probably heard before in some form or fashion.

While it’s a novel system that allows players to theoretically be able to play any song up front without paying anything, I found the timer system to be a little tough, particularly when it comes to the total amount of songs that you can bank. Also, songs cost an insane amount, meaning that you’ll have to play and beat 15-20 songs in the random Golden Play mode before you can purchase one song. If you’re keeping up with the timers somewhat regularly, that should translate to a song or two to purchase a day. Again, not too unreasonable, but considering the likelihood of replays during Golden Play, I can imagine the game getting boring fairly quickly. There’s always the IAP route of course, but that route equates to one song purchase for every 3-4 dollars, which feels a bit high.

If you can look past the song purchasing system and think of Pianista as a fun rhythm game that throws some very high quality music at you to play in a random order, then it’s pretty top notch. Despite my concerns raised above, I had no problems thinking of the game in this fashion, meaning that it’s very possible to thoroughly enjoy the title and just think of the song purchases as nice bonuses. The developer has also promised a score attack competitive mode, which should also add to the game’s general replayability. Finally, considering the very high quality of the song selection (along with the refined rhythm system), there’s really no reason why fans of rhythm games or classical music can’t at least try it out to see if it suits their fancy.