Ironically, the very success of the rhythm genre back at Guitar Hero’s launch on home consoles in 2005 was ultimately its undoing. A complete over saturation of the genre in under five years – spanning many different formats, even more spin-offs and unbeknownst amount of instrument-shaped controllers – meant the genre vanished almost as quickly as it had arrived. Rhythm game fans should not be disheartened, however – many developers took this as an opportunity to create well-crafted and unique music titles that were not iterative, and used the best features of the platform to their advantage, instead of relying on plastic peripherals as a crutch. The App Store was one of the delighted recipients of this new wave of rhythm games, and developers like Rayark have led the way with stunning efforts such as VOEZ (Free) that have impressed us in the past for putting a spin on the tired formula without becoming too derivative from the core elements of the genre that attracted so many fans in the first place. Lanota ($1.99) follows this trend – while some of the more radical attempts at distinguishing itself from the crowd can occasionally become a distration, developers Noxy Games have crafted an immersive and beautiful world that makes merely tapping in time to a song become a fully fledged adventure.

Rather than using the tried and true trope of rhythm titles whereby the notes to tap to fall from the top of the screen to the bottom, Lanota decides to scrap this concept and go full circle, quite literally. Bars now materialise from the middle of the screen, and advance towards the circumference of a circle that takes up the majority of the game area. When these notes reach the perimeter of this ring, you have to tap, slide or swipe the screen, all depending on the different type of input that the bar specifies. This means that, rather than normal music games that are limited by a specific number of places you have to tap in time with, Lanota is able to more accurately represent the song at hand with a 360 degree playing field. You now feel somewhat in control of the guitar solos, elegant piano slides or rousing snare hits that may appear in the eclectic song choice. This is further emphasised by how certain actions – like having to swipe either forwards or backwards – actually have an effect on the circle arena. It could turn, flip around, or get smaller or bigger, which adds some refreshing dynamism to a genre that is notorious for static gameplay. 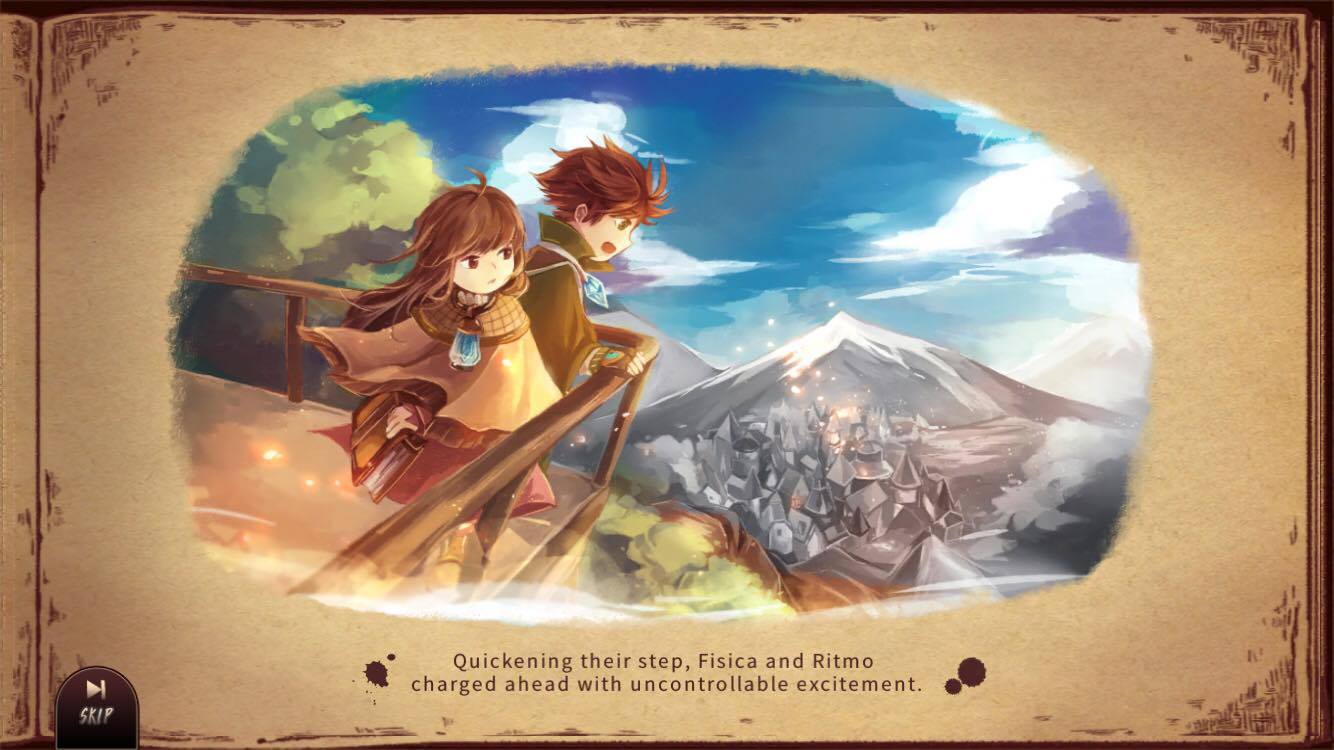 Lanota’s other trump card is its attempts to incorporate a story into the game, which is a relative rarity for rhythm game titles that normally focus on a setlist and don’t attempt to deviate from it. There are three chapters available – two main story ones and one side story entry that is available for an in app purchase – which all contain beautiful hand-painted artwork illustrating the adventures of Fisica and Ritmo, two children who are attempting to bring color to a faded, monochromatic world. A horrible curse of silence named Al Niente plagues the land, and through using Notalium which is obtained through completing songs, they are returning the globe to its former glory, and discovering new areas and everyday items for the first time. While not exactly groundbreaking or revolutionary from a storytelling perspective, the incredible artwork truly brings Lanota’s universe to life. Even the world map is elegantly and carefully considered, which gives a strong incentive to revisit certain songs and places to complete new challenges, receive more Notalium and continue on with the main story.

If it wasn’t evident enough already, Lanota is an ambitious and lovingly-crafted game, and is highly recommended to any fans of the genre or people looking for something new and interesting from rhythm titles. However, it is this ambition that means Lanota isn’t a seamless experience, and can lead to frustration through its intention to innovate. The main invention of using a circle arena to strike the notes may work in theory, and your mileage may vary based on the size of your iDevice, however in practice the constant manipulation of this ring in size and orientation around the screen just makes it too difficult to follow at the best of times. Furthermore, having notes appear at the top of the hoop becomes extremely troublesome, as naturally the rest of the display will become obscured by your fingers, which can be detrimental on the harder songs where every missed note is pivotal to completion. This is not necessarily an oversight of the developers, but an inevitability of trying to reinvent the traditions of the genre. There is a reason why the static horizontal setup of titles such as Guitar Hero has been so successful – while predictable and a tad stale, there is no room for error on the game’s part. The spherical arena works really well when it is not a distraction, but it simply is not consistent enough to not become frustrating in some of the more hectic songs. 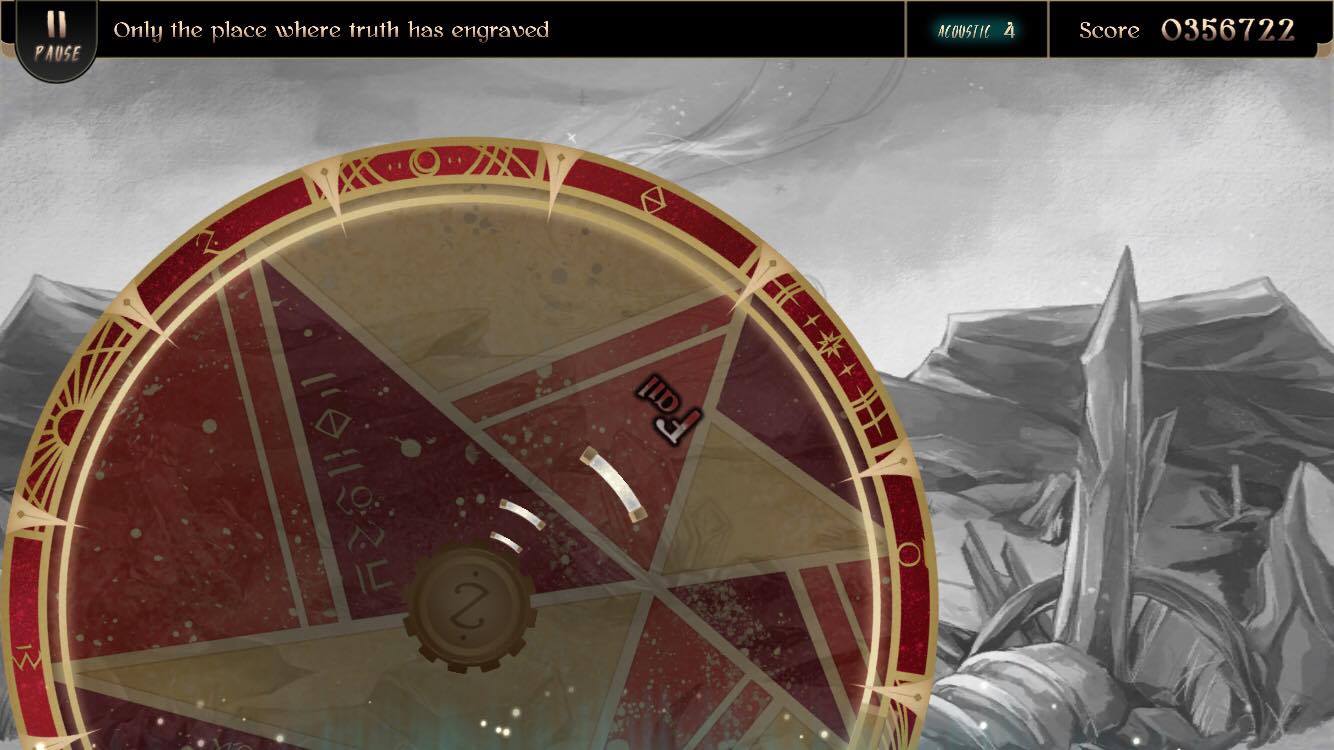 However, the ability to alter many aspects of each song is very welcome, as it does allow you to alleviate the troubles of the spinning circular track somewhat and tailor each song to your own ability. Primarily, there are three difficulty levels – whisper, acoustic and ultra (essentially easy, medium and hard, despite the pretentious names) – although you are also able to change the speed at which notes come towards you, and toggle on a no fail mode. The latter option is a particular blessing – being able to put on the ‘Tuned’ mode which does not abruptly end your run was very welcome in completing one pulsating, electronic tune that felt impossible to complete on even the medium difficulty option. Furthermore, playing songs on varying difficulties and speeds is encouraged, as every single tune has its own challenge objective that is fulfilled by scoring a certain number of points, or not failing on a maximum number of notes on the whisper, acoustic or ultra options – and each of these are different and entirely unique to every single track. For a rhythm game, this incentive to revisit songs, and alter the options for more Notalium to progress the story, in a sense expands the 11 track roster into a far more content filled experience. 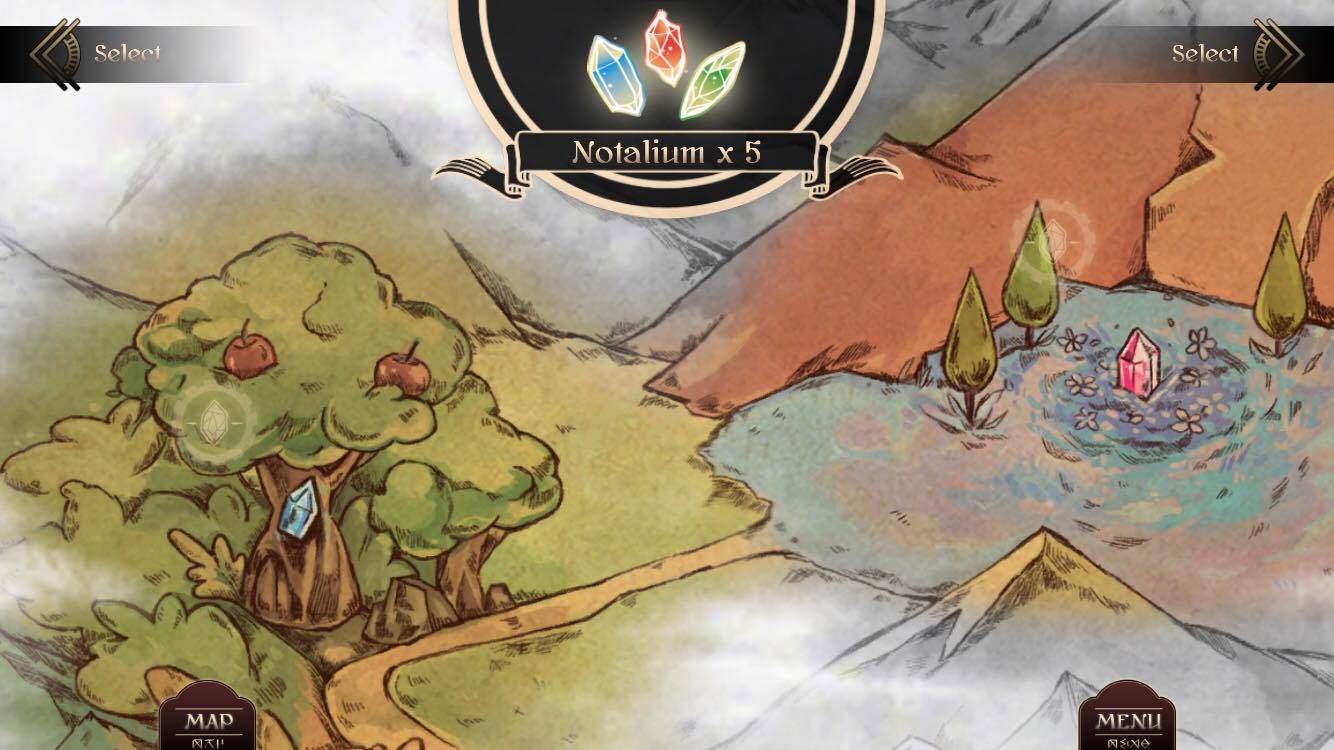 The option of a $3.99 side story chapter that unlocks five bonus songs and even more artwork is very welcome too – especially as this is the extent of the in app purchases within Lanota. While the total of 16 tracks within the whole game may seem rather limited, the quality and variation of every single one of these songs must be emphasised. The game’s soundtrack spans numerous genres, from very pop-inspired invigorating ballads to even electronic, energetic and enthusiastic dubstep tunes, and means none feel like chores to play again after the initial rush. The very best songs on Lanota even reminded me of the soundtrack of the Wii classic Xenoblade Chronicles, which for anyone who isn’t a fan of the iconic RPG title, is high praise indeed. None of the tracks appear to be too interlinked with the story, however, which is somewhat disappointing. The illustration of the narrative is incredible, and each piece of artwork is great to witness – but the actual strength of Lanota’s tale and its attempts at marketing itself as a role playing game are a little spurious. While the story is more integrated into the game than that of genre counterparts such as VOEZ, I still get the impression that Lanota is a music title with a story added on and not one where both elements are interdependent, which for a game of such ambition is a bit of a shame.

Ultimately, Lanota is a work of art – while occasionally an ordeal, Noxy Games have proved they are capable of crafting an ambitious and appealing adventure that succeeds more than it sometimes falters. Fans of rhythm titles should definitely take a look, and even those disillusioned by the genre will be impressed by the game’s attempts to innovate and bring life to a landscape that, like in the actual narrative of Lanota, has become encapsulated by a monochromatic and soporific silence. With more story chapters and songs promised – and hopefully a couple of fixes to the gameplay experience – Lanota is a high note for music games on the App Store.