Can you believe it? Infinity Blade ($5.99) is turning 6, and I’m feeling old. The Infinity Blade series was for the longest time synonymous with cutting edge mobile visuals, and for good reason. The original was the first iOS game to run on the Unreal Engine, and the subsequent two continued pushing the envelope. While some didn’t care that much for the swipe-based combat, pretty much everyone acknowledged the series’ artistic merits and its place as a milestone of a mobile game. To celebrate the 6th anniversary of the original, the developers are inviting everyone to the Infinity Blade Birthday Bash, running from today until December 9th. 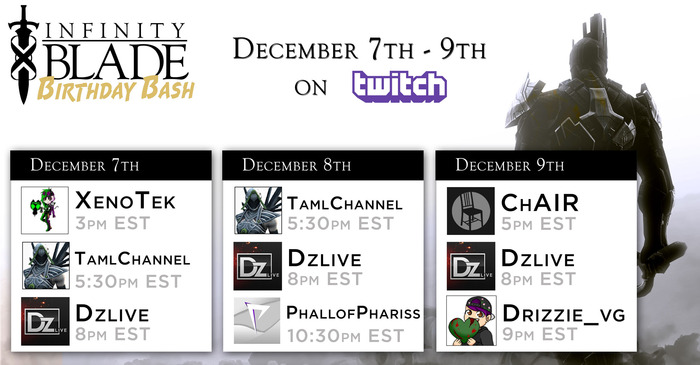 Each day, streamers will play Infinity Blade throughout the game, and if you watch their streams, you’ll have a chance to win some swag. Also, each day you can play clashmobs themed around each streamer for a chance to win in-game currency and gems. Check out the full schedule above and more details here and go celebrate this seminal mobile game.