In spite of the seeming limitation of having no physical buttons by default, iOS has a lot of really great platformers. Some of them get by with virtual controls, putting some of the burden on the player to simply get used to them. That’s fine, but unless the game is a port from another platform, I’m not sure if it’s really the best way to go. I think some of the best platformers on iOS are the ones that avoid the temptation of using virtual buttons and find a way to build a game around a more fitting setup. Sure, you have to sacrifice some of the conventional ways of designing levels and obstacles, but in doing that, many games find something new and interesting. 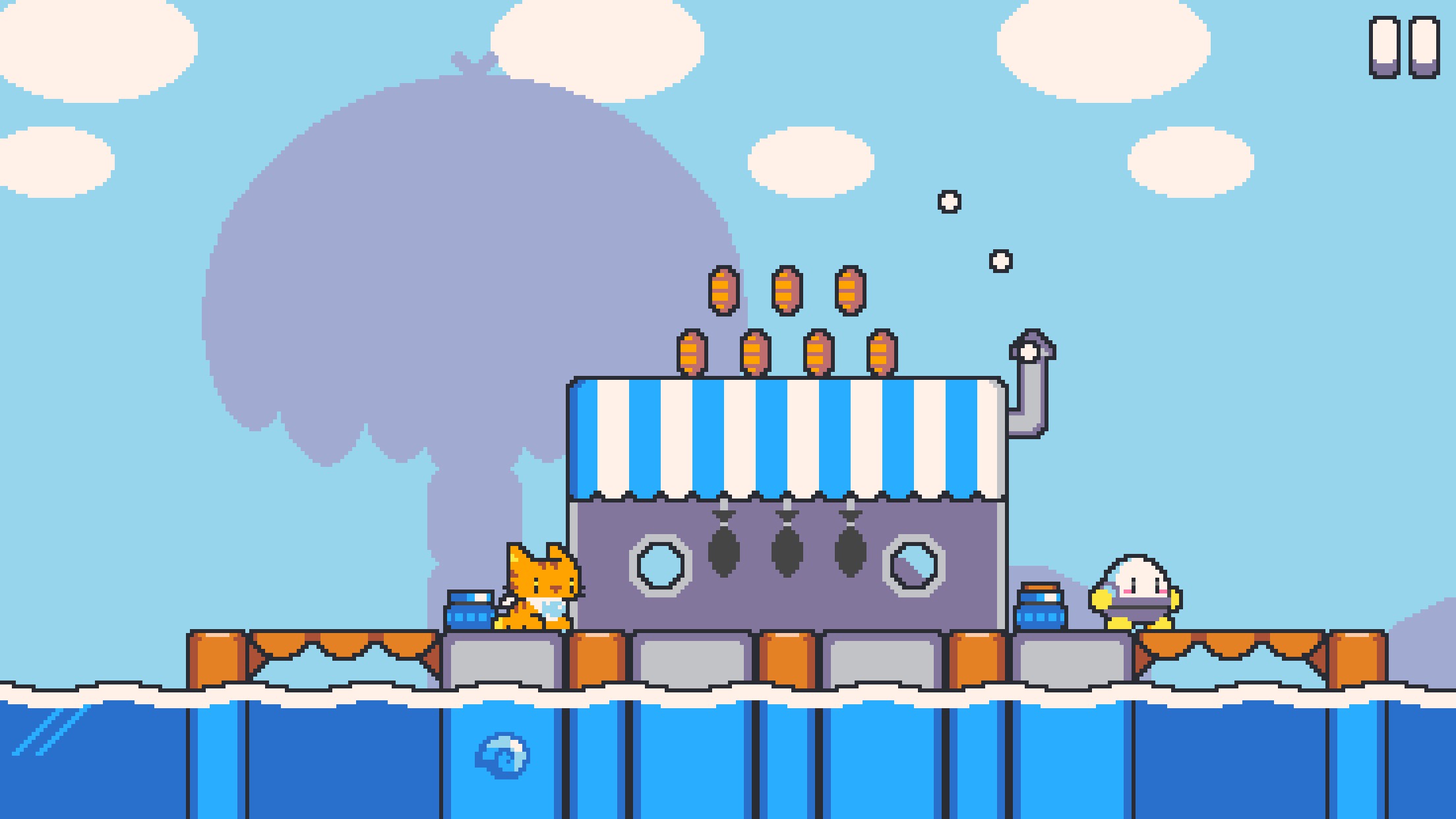 In the case of Super Cat Tales (Free), the latest from developer Neutronized and publisher FDG, that approach results in a fast-paced adventure that forces you to think about the walls nearly as much as the ground beneath your paws. The controls are very simple. Tap and hold the left side of the screen to go left, and the right side to go right. If you double-tap and hold, your cat will do a little dash, and if you dash off the edge of a platform, the kitty will jump. Walking into a wall will cause the little cat to start climbing up it as long as gravity allows, while pressing the opposite side of the screen will make your cat jump off the wall. That’s basically it, though as you rescue your friends and unlock new abilities, you’ll be able to do some new things with those moves.

The cat you start with is an agile little fellow who can climb up walls better than anyone else. He’s all you’ve got for the first world of the game, but after that, you’ll earn a new cat in each subsequent world. There are six worlds in total, and over fifty levels spread across them. Each world also houses one town where you can talk to the locals and shop, and one secret level that you’ll have to hunt for. The basic goal in each level is to reach the checkered area at the end, but you’ll also sometimes need to hunt for keys to move forward. 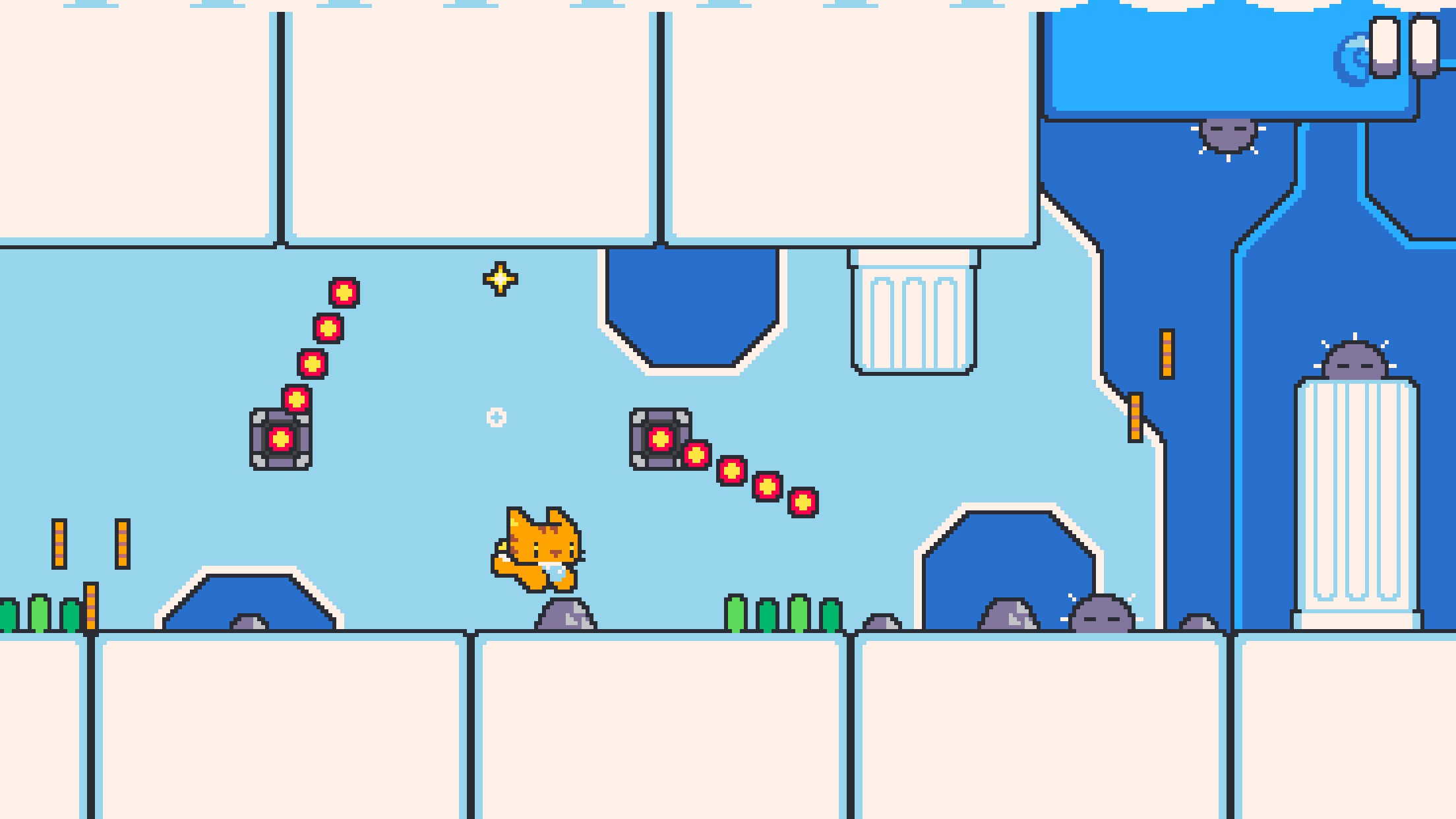 Each level also contains a number of bells, some of which are in obvious places, others hidden quite well. Then there are the very irritating ones that are in an obvious place and are still tough to reach. Super Cat Tales starts off at a fairly breezy pace, but turns up the heat just after the mid-point. Your cat can take a single hit and shake it off after a little while, but if you get hit again while you’re seeing stars, you’ll lose a life. Getting through the levels isn’t too tough for the most part, but if you want to collect all the bells in the game, you’ve got your work cut out for you. You’ll have to backtrack for some bells after rescuing a friend whose abilities are needed, and a few bells even seem to require the use of a helper.

Helpers are special creatures that will follow your cat through the whole level, lending you their special brand of assistance. They can be bought in the shop using the coins you’ll collect as you play, or you can watch a video ad for a random freebie. They’re rarely useful in the first half of the game, but don’t forget about them. They’ll come in handy later. Buying them at the shop gives you an item good for their help on exactly one playthrough of a level. You can use that item at the start of the level, or anywhere you find a pink blanket laying on the ground. You’re also able to switch cats whenever you find those blankets, and their very presence is an indication that you’ll either need another cat’s skills to move forward or to find a secret of some kind. 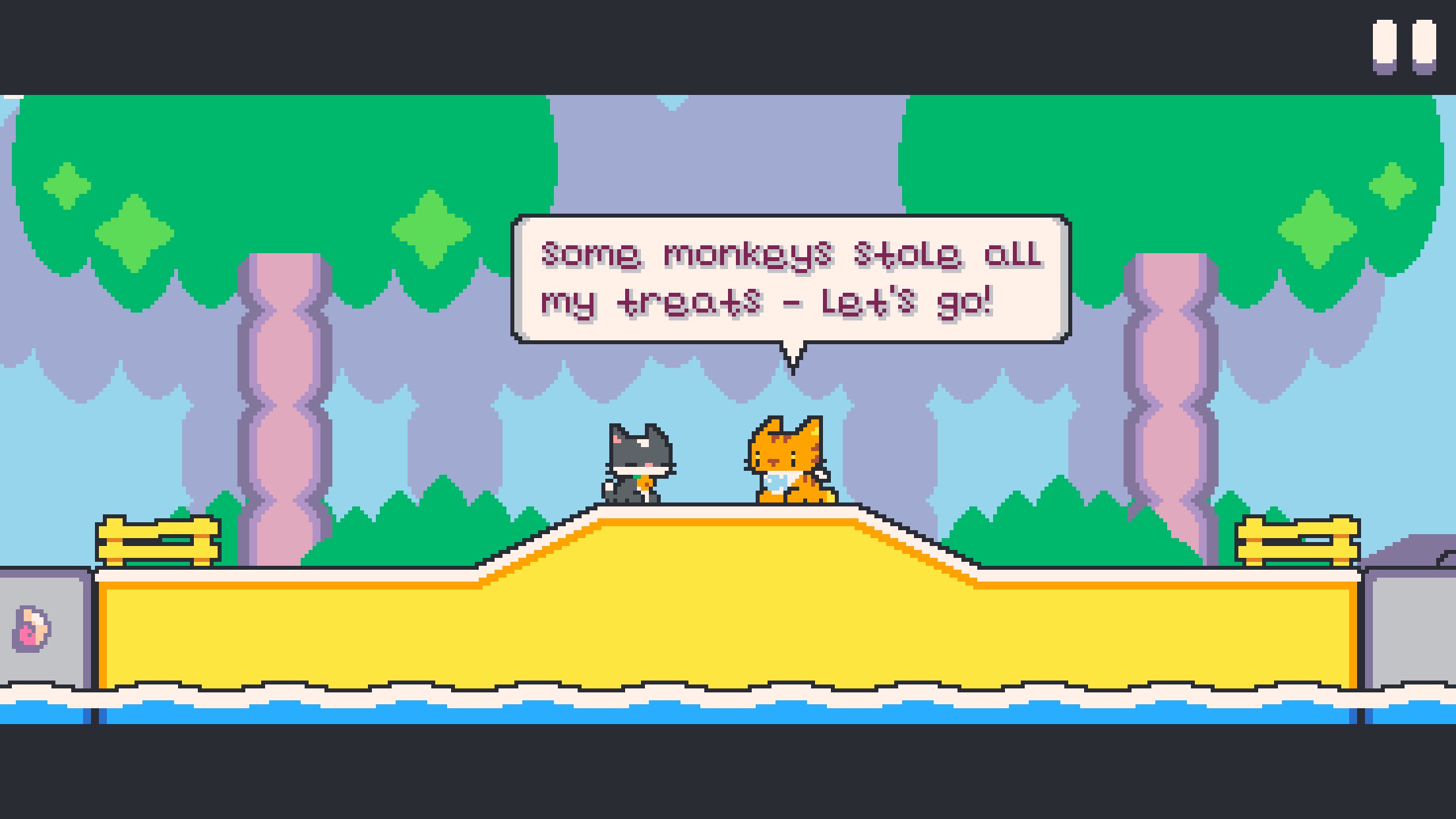 The graphics are colorful and well-animated, and the cats in particular are adorable stand-outs. Each one has a few animations that are unique, conveying each cat’s personality quite well. There’s quite a mix of visuals in the levels, with each world often housing two or three different types of terrain. The music doesn’t offer quite as much variety, leaning heavily on a bouncy theme that plays in most of the levels of the game. The game includes a selection of achievements through Game Center, along with leaderboards that track your total time through each world. Shaving seconds off of each level in order to move up in the ranks is an awful lot of fun thanks to the zippy agility the cats possess.

Super Cat Tales will let you play the whole game for free, but you’ll have to put up with ads every few levels and a limited amount of lives that take real time to recover. There are separate IAPs to remove non-voluntary ads, double your coin intake, activate the special golden cat power-up, and of course, for unlimited lives. Each of those sells for $1.99, but you can buy a premium unlock IAP that includes everything for $4.99. As a bonus, that IAP also lifts the bell requirement for entering each new world. The only ads left in the game after buying the premium unlock are the ones you can choose to watch for the free helpers, and you’ll have coins coming out your ears thanks to that doubler, so you won’t really need to watch those at all if you don’t want to.

With excellent controls, sharp level designs, lots of secrets, and an adorable presentation, it’s hard to find anything that’s not to like in Super Cat Tales. More levels would be nice, I suppose. Perhaps a slightly quicker ramp-up in difficulty. But these are nitpicks on an outstanding game, only worth mentioning because what’s here already is just so good. Playing through the game is fun, collecting all the bells is a good challenge, and the speed-running carries things from there on out. If you like cats, platformers, cat platformers, or platform cats, you should check this one out.