Hello, friends. Have you been enjoying SteamWorld Heist ($4.99) as much as I have? If so, I’ve got a special treat for you today. Although the game’s developer, Image & Form, is obviously quite busy in the wake of the iOS release of their excellent cowbots-in-space strategy game, I managed to grab their sheriff, Brjann Sigurgeirsson, for a little chat. We talk about the game itself, how it came to iOS, and future plans for the developer on the platform. Many thanks to Brjann for making time for this interview. 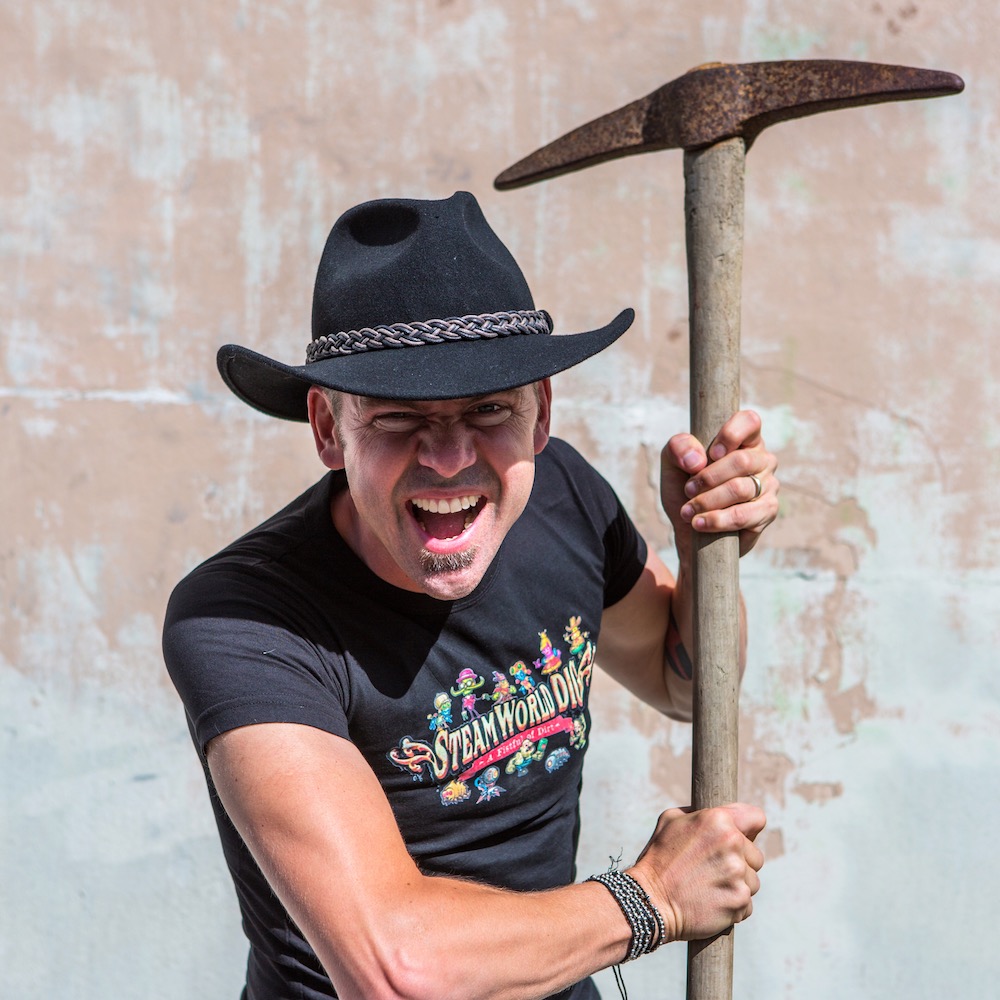 TouchArcade (TA): As is standard procedure at TouchArcade, please let our readers know who you are and what your favorite pizza toppings are.

TA: It’s been a while since your last game release on iOS. What made you decide to port SteamWorld Heist to the platform?

BS: Yes, I can’t believe it’s been five years since we released Anthill ($1.99) for iOS! It’s still a game that makes me almost miss flight connections and that I cling to when everyone’s being mean. An amazing game! Buy it! NOW!

We decided very early to have an iOS version of SteamWorld Heist – we realized that the game wouldn’t care if it’s played with a controller or via touch input. We needed to fine-tune quite a few things for the iOS version, however – menus needed more love and the aiming mechanism had to be spot on (pardon the pun). Aiming via touch and still having to time your shots (so you don’t automatically hit when you place the crosshairs on an enemy’s head) had to be interesting.

But there really were times when we weren’t sure whether to bring it to mobile. A lot has happened since 2011 and Anthill, and we just didn’t know if a paid game was going to give us our money back, if it was going to be worth the effort. Well, we doubt no more. 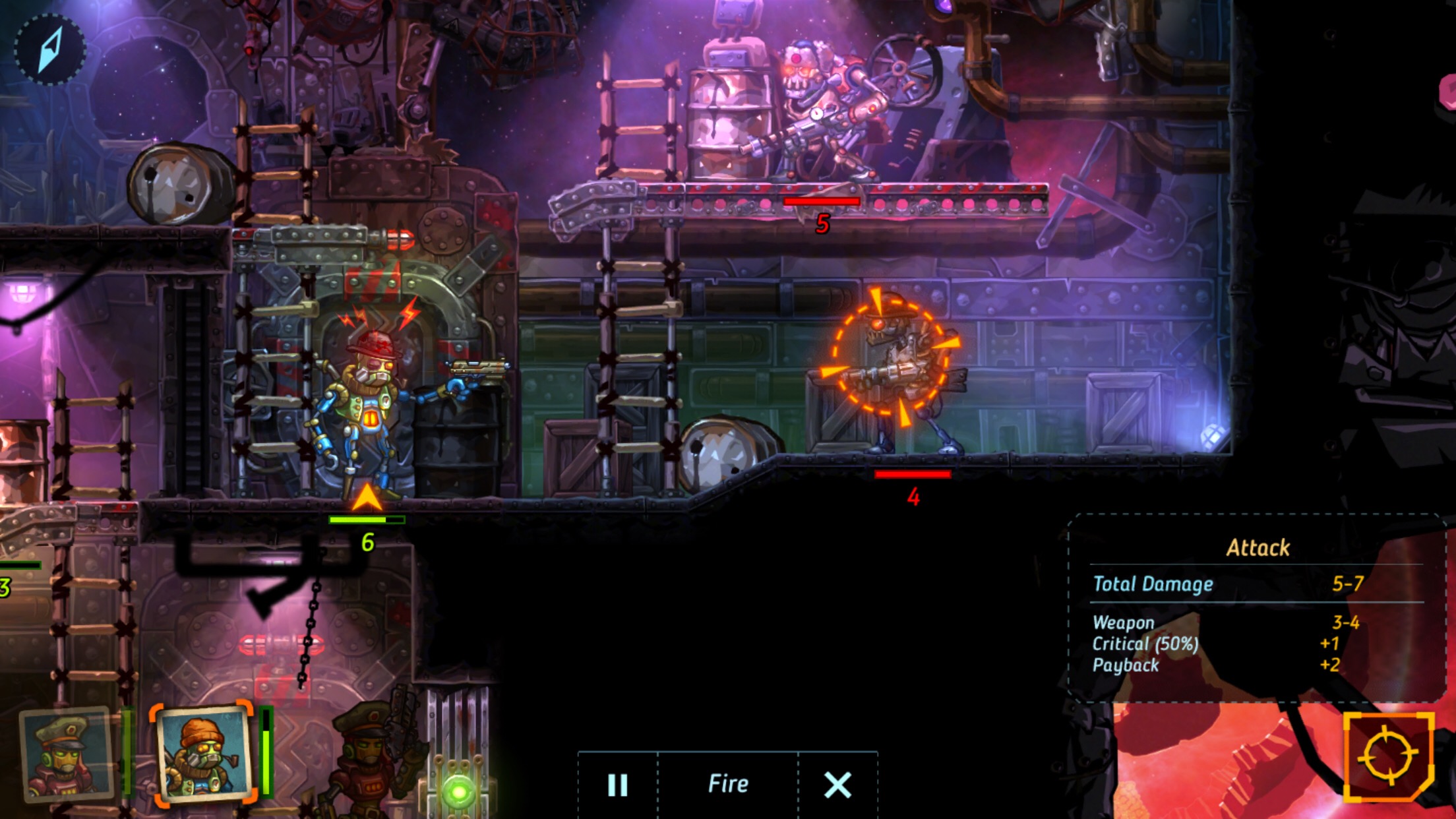 TA: Can we expect to see any other SteamWorld games on iOS? Many readers have said they’d like a port of Dig, and I personally think SteamWorld Tower Defense would be a good fit.

BS: Well, SteamWorld Tower Defense is a no-brainer, isn’t it? It’s actually made for touch input, since you have to use the stylus on the Nintendo 3DS touch screen! I guess we first have to locate the source code, it sits on some server. It’s been a while since we touched that game! Then we’ll have to brush up the graphics a bit, I guess. Perhaps change the music. And so on. But yeah, it’s a good fit.

SteamWorld Dig is a different matter – it’s a platformer with quite a bit of special moves, and that would have to be translated into an enjoyable experience. I’ve actually been asking around the last few days in the TouchArcade forums if someone could point me towards complex platformer games that work well on iOS and now I have a few supposedly good examples – thanks everyone, I’ll try those out soon enough!

What I’m concerned about is the use on-screen joysticks and so on, simply tacking it onto the screen. I find it often doesn’t work very well. We’re not in this business to disappoint, so we would have to come up with some good solutions.

TA: In a similar vein, do you intend to include iOS in your plans for future games?

BS: Well… yeah! If we’d had any idea that SteamWorld Heist would have been received this well, we would have done it sooner! 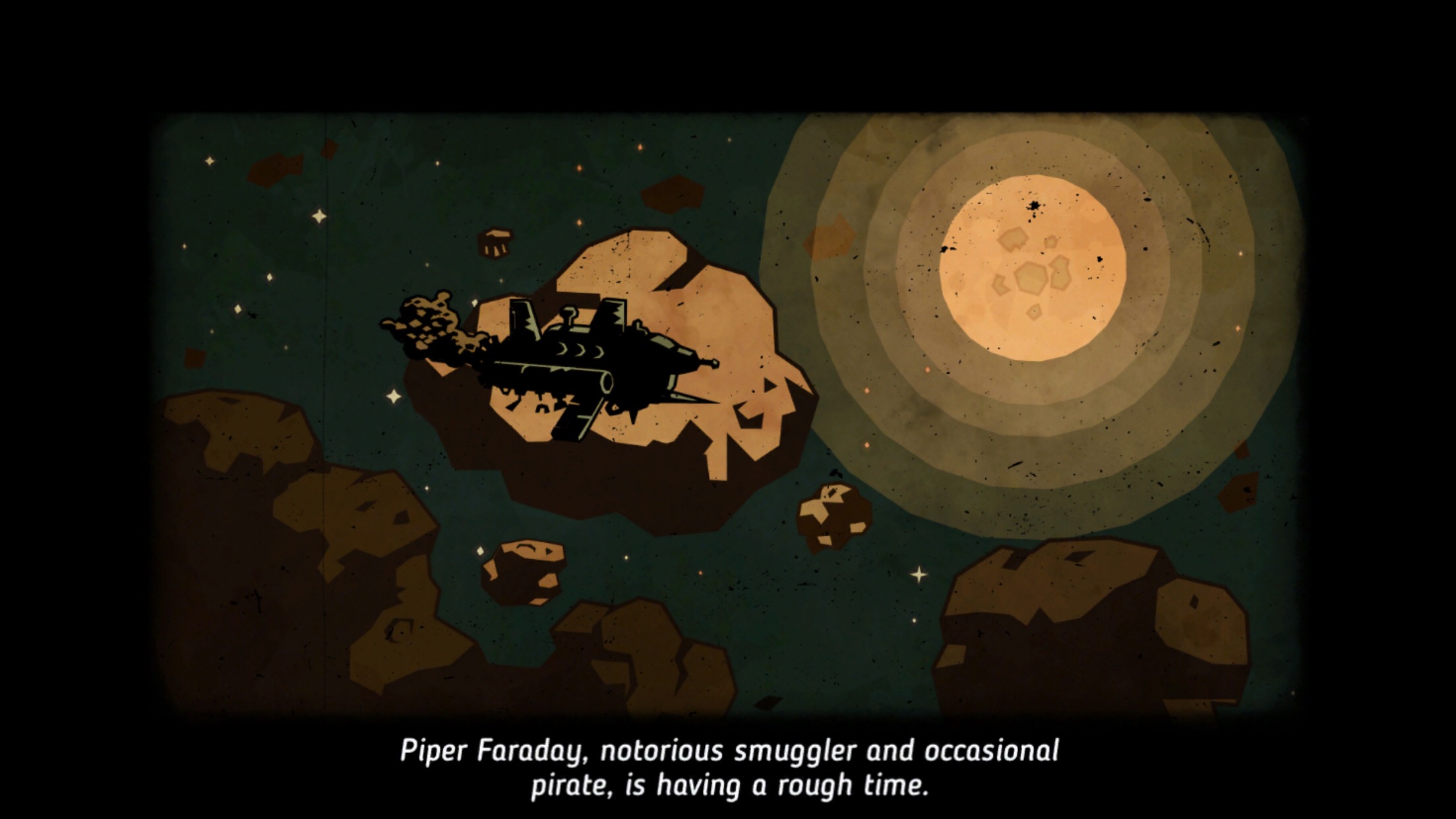 TA: How did the idea of doing a turn-based strategy RPG from a side-view come about? It’s a rather unusual approach to the genre. Any specific inspirations for the game?

BS: All our game ideas are usually conceived during lunch breaks. That’s when many of us come together and talk about stuff. I should feel guilty about this since everyone’s by definition not at work while having lunch, but we don’t always toss around game ideas; a lot of lunch hour discussions revolve around politics, pop culture and what have you. But yes, that’s where they’re most often “born". What we do then is just throw the ideas around without any real effort – it’s not like we’re trying to come up with new games, it’s just a relaxed forum for discussion.

As you’ve probably noticed, our games aren’t just different from each other in genre; they’re genre mashups, which makes them interesting on a quite other level as well. We try to not just nail core gameplay mechanisms, but also strive to make our games a bit more than one-trick ponies. Anthill is a line-drawing real-time strategy castle-defense game, SteamWorld Dig is a mining platformer, and SteamWorld Heist is a turn-based combat strategy shooter.

When an idea “sticks" we draft a game design document. It’s very rough at the outset. Then our artists discuss what it should look like, while our programmers and designers talk about what needs to be done. When in development we often run in the wrong direction, because typically our games haven’t really been done before. We experiment, backtrack and try new things if stuff doesn’t work. Very much of the game comes together at the end!

I know for a fact that our creative lead Olle Håkansson and a few others were totally engrossed in XCOM around the time of the “birth" of SteamWorld Heist, and that’s also how it started. He was praising that game during lunch one day, and then someone said “Wouldn’t it be cool if…", which is how everything typically starts here. We could also study the side-view perspective of Worms, although no one was enamored with that game the way Olle and the others were with XCOM.

Personally I was more than happy. I love strategy games. I play at least ten online chess games per day, and strategy games is what I get hooked on. It’s like crack, I imagine. I forget everything else and don’t want to do ANYTHING else when I play. 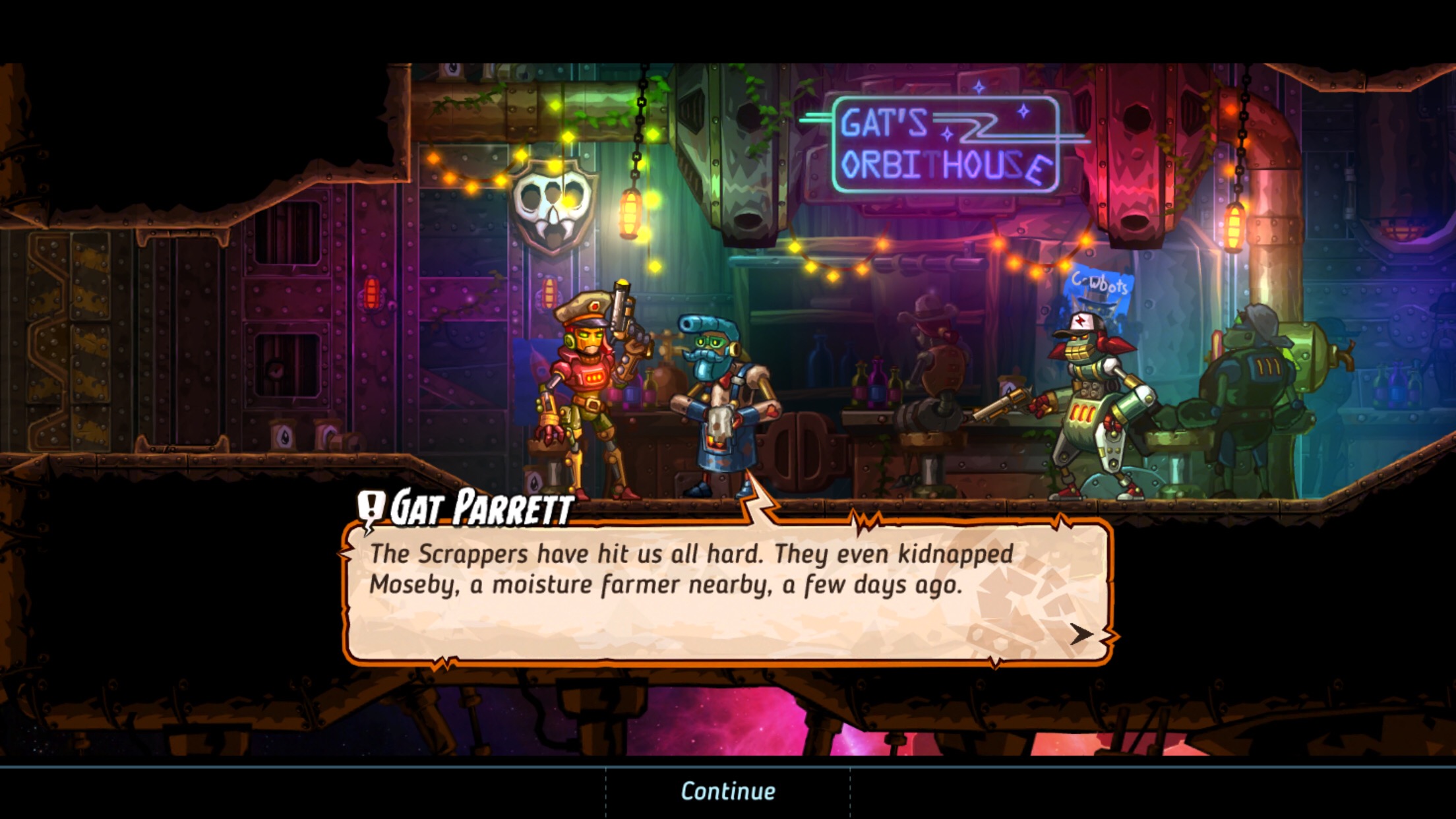 TA: What is your favorite element of SteamWorld Heist? And what one thing would you do differently given unlimited time/budget?

BS: Multiplayer, in some interesting shootout settings. There is a level in SteamWorld Heist that touches on it, called “Monsieur Cachottière’s Brawl Club", where different factions meet to slug it out. Since I’m so much in love with on-line chess, I would have given my right arm (I’m left-handed, so no great loss) to have a versus multiplayer mode. But that’s given unlimited time, as the question implies. We use our own C++ engine, and so we have to create every system we want to include.

We may disagree in the office about the multiplayer mode, a lot of the guys and girls prefer co-op. Maybe it’s just me being overly competitive. But I think a versus mode shouldn’t be too unfair. I used to love an iOS game called High Noon, which was all about shootout dueling in the Wild West. Awesome setting and mood, but sometimes the shootouts were a bit unfair due to lag. Since Heist is turn-based, I can’t see lag being a problem.

TA: Can we expect to see the expansion DLC in the iOS version in the future? Why was it not initially included?

BS: Yes, we’re discussing it as I write this. Hopefully we can pry loose some office resources, we’re very busy making our next game as well. There is a very meaty DLC – and some cosmetic ones as well – for all other platforms, but we had our eyes set on a fine App Store category called “Pay Once and Play", and that sounded just about right for Heist. 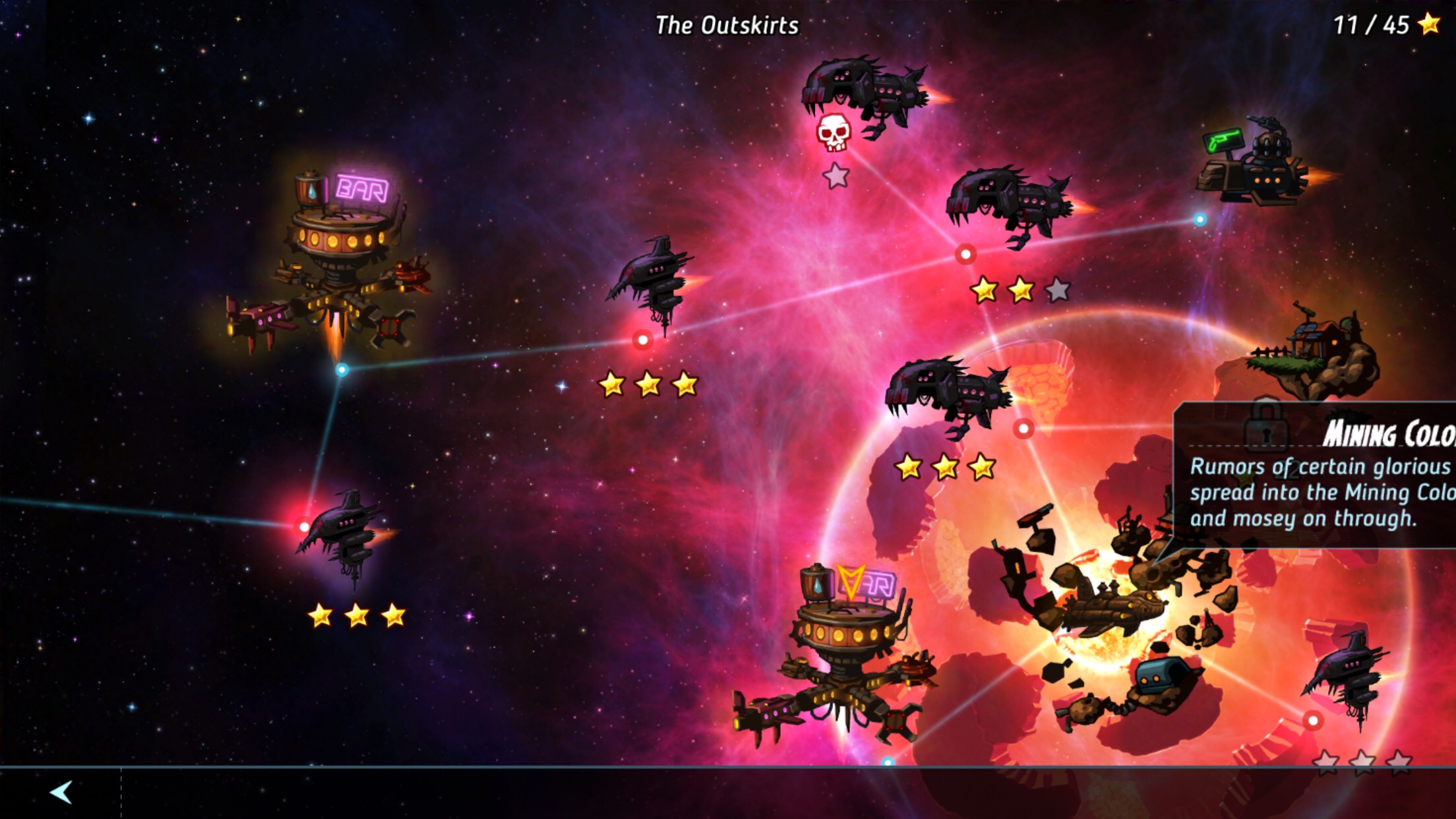 TA: You’ve published games on a number of platforms now. How do you see iOS in comparison in terms of strengths and weaknesses?

BS: There’s strength in numbers, for one – the number of potential customers is huge. And publishing to iOS is largely automated, straightforward and efficient. Plus the fact that touch input presents a lot of interesting opportunities. There are so many amazing games on iOS.

The weaknesses are largely comprised of the flipside of the strengths. A lot of customers means a lot of publishers and games. Sticking out almost becomes a dangerous lottery. And since publishing is automated, it’s hard for many developers to actually get in touch with real people at Apple. Once you do, you notice that they’re just as friendly as all the other platform owners, but they have to cover a lot of games per person. And free-to-play… sadly we’ll probably never be able to compete with the big guns there. We want to make games that don’t fit in that space, I guess. That’s not to say I can’t enjoy F2P games. And finally, there are also a lot of not-very-interesting games as well. It can be hard to find what you’re looking for – and a lot of good games drown in the torrent of games released all the time.

TA: What are your favorite mobile games? Favorite games in general?

BS: My favorite game right now is a strategy game called Auralux Constellations (Free) (or Auralux 2), and before that it was Tentacle Wars (Free). Very clever games, perfect for touch input. I’m not sure who the developers are, but they know what they’re doing. A “long" time ago I thought there would never be a game that would top Osmos ($2.99), which is probably a good reason why I like the two games above so much.

No surprise about the best game on the planet, I guess: chess, of course! Right now Carlsen is playing Karjakin for the World Championship title. They’re playing in New York and the games start at 8:00 pm my time and continue well into the night, so I’m losing a bit of sleep right now. Otherwise I got hooked at an early age on arcade games, then the Game & Watch and later the Famicom when I lived in Japan. I think I love every game that makes me forget the passage of time. Perhaps that’s why I’m still so impressed by us making Anthill, which is really hypnotic.

TA: If you want to give our readers any particular message, here’s your free space to do so!

BS: Thanks! OK, although I’ve listed a few favorite games above, I try to make a point of playing games that I’m not sure if I’ll like. I’ve found a treasure of games that way, and I believe we’re not as narrow-minded as we think. So therefore: play games! PLAY MORE GAMES!

TA: Thanks again for your time, Brjann. I’ll let you get back to work now!