I think the first platformer I ever played where you could manipulate gravity was Irem’s Metal Storm for the 8-bit NES. It’s a side-scrolling action game, a genre that at the time was so flooded that you virtually had to have some kind of gimmick to stand out. You were mostly jumping and shooting, but you also had a handy button that let you flip to the ceiling. That mechanic showed up here and there over the years before the popular VVVVVV ($2.99) used it better than any game had before, at least in my opinion. It makes for clever puzzles, but more importantly, it rewrites the rules of one of gaming’s most well-worn genres. So it’s not surprising that a lot of games that followed VVVVVV drew that mechanic into their tool sets. Unfortunately, in becoming a trend, flipping gravity has lost a lot of what it can offer a game. 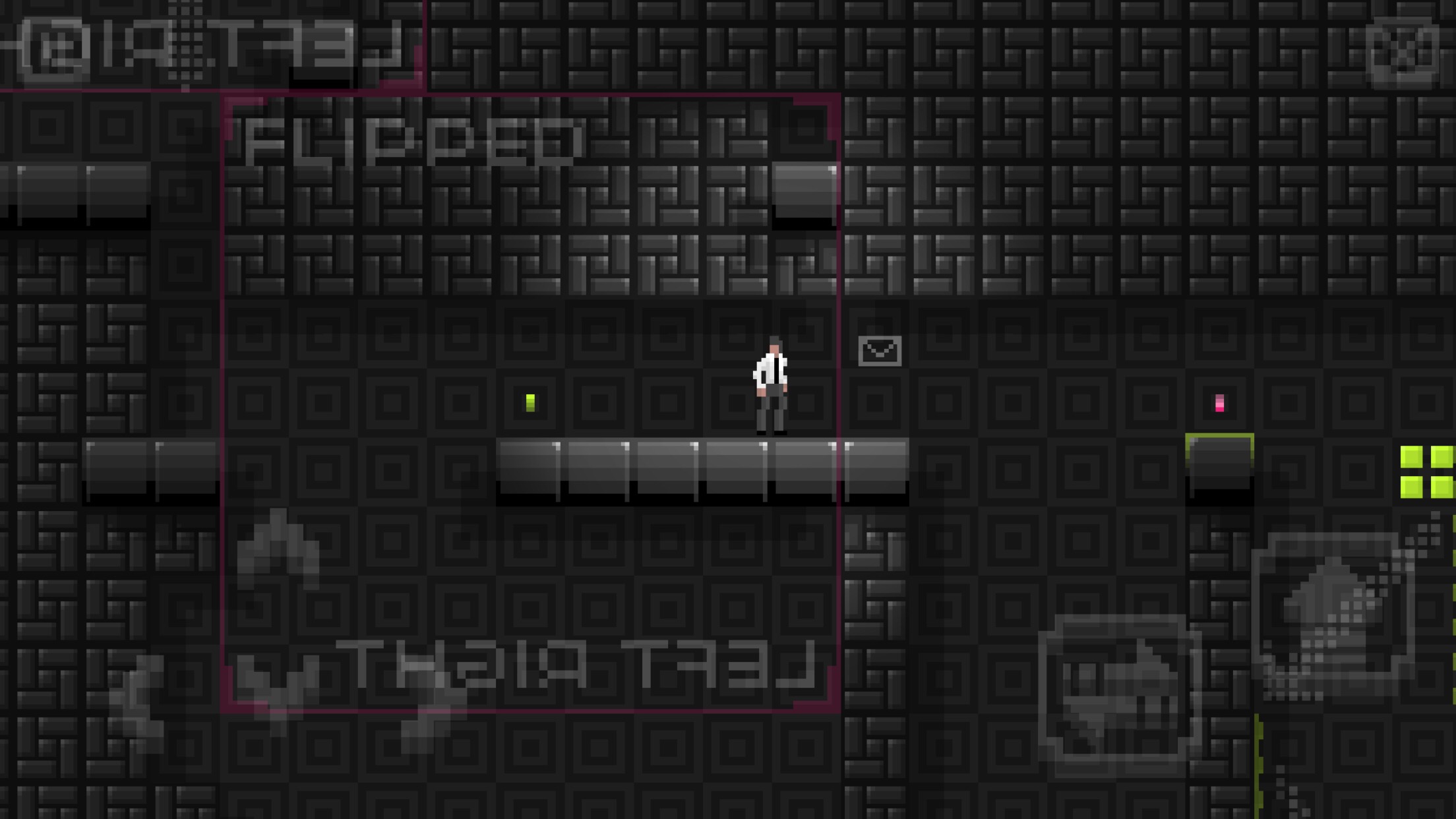 RETSNOM ($2.99) tries to reinvigorate that concept by giving it a literal twist. It tries its best to be subversive in both gameplay and narrative. I would say it’s a partial success in both regards, but it’s lacking a certain coherence across the board that keeps it from being all that it could have been. It’s also a very difficult game, and only partly by design. You’ll need a good head on your shoulders to figure out the solutions to each stage, but you’ll also need quick reflexes and the platforming chops to execute those plans. Those skills can only work in coordination with responsive controls, however, and RETSNOM occasionally has problems with that, making for a very frustrating experience at times.

The premise of the game sees you playing a scientist who is desperate to save his daughter’s life. There’s been a zombie outbreak, and his daughter was infected. The lab he works at is trying to prepare an antidote, but there is no way it will be ready in time to save his daughter. He somehow stumbles across a time portal to the future and reasons that if humanity has survived, someone must have developed an antidote. He means to get it and bring it back, doing whatever it takes to bring his child back to good health. When he reaches the future, he finds that the lab has been made into a sort of maze, most likely to keep the zombies out. The only way to move forward is through use of special mirrors that allow him to flip the world. The story is quite tightly connected to the gameplay, and although I feel like it drops the ball a little at the end, I was certainly interested the whole way through. 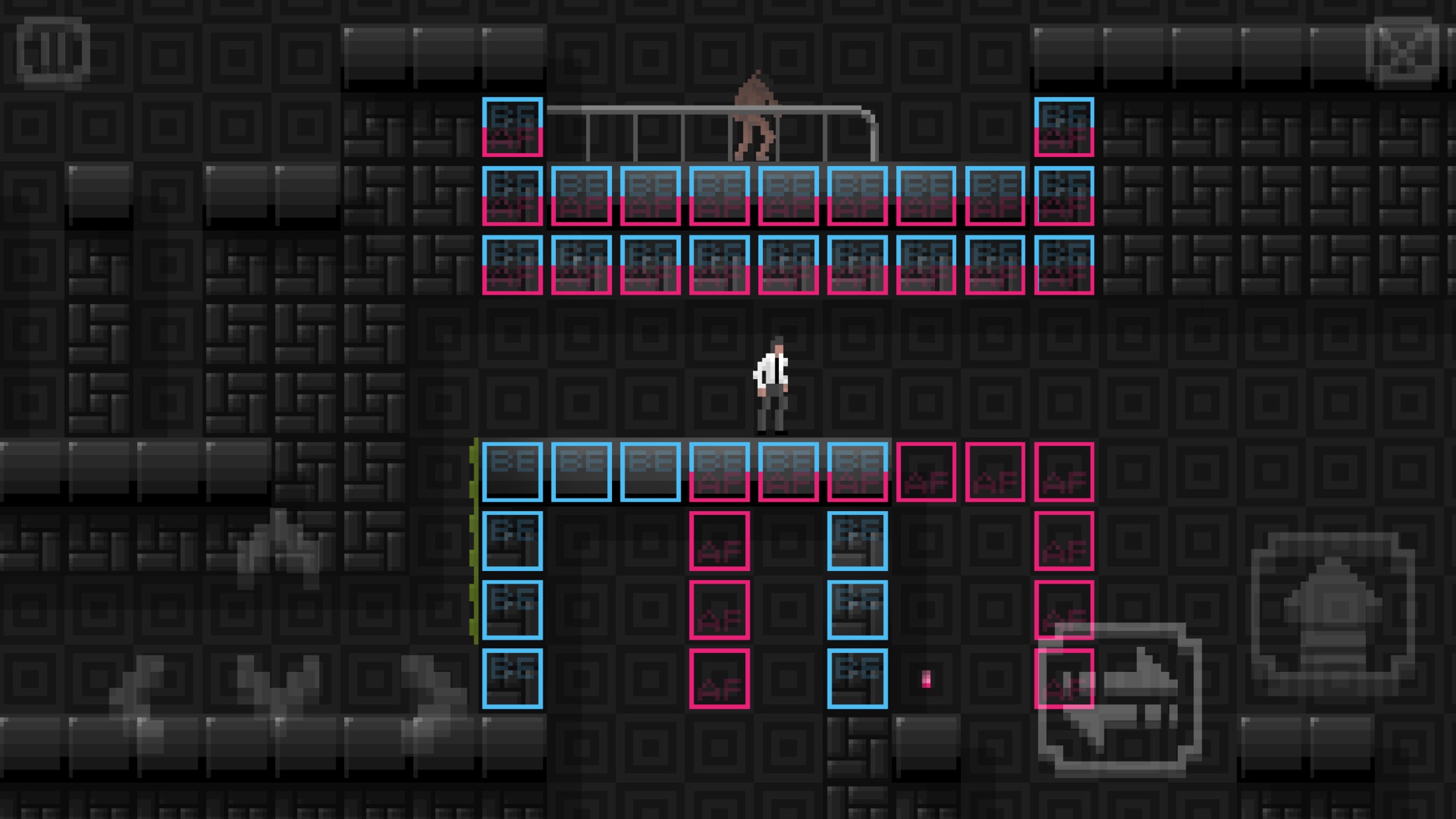 The game takes place across 5 worlds and more than 60 stages. Your primary goal in each stage is to retrieve two door parts and a key, then make your way to the exit. There are also stuffed rabbits you can collect if you’re feeling particularly courageous. They’re usually in hard-to-reach or dangerous locations, but for the most part, they never require you to do anything you won’t end up having to eventually do in the course of solving the regular stage goals, so you might as well enjoy the free practice. Your character starts off with the ability to run and jump. Not long after starting the game, you’ll get your first mirror, which allows you to flip a section of the world around you from left to right. For example, if there’s a wall in front of you and nothing behind you, you can flip the wall so that it’s now behind you. Your abilities will expand throughout the game, but as with the story, I feel like spoiling too much would be a disservice to the game. Suffice it to say, you’re going to have to bend your brain in some new ways before it’s all done. 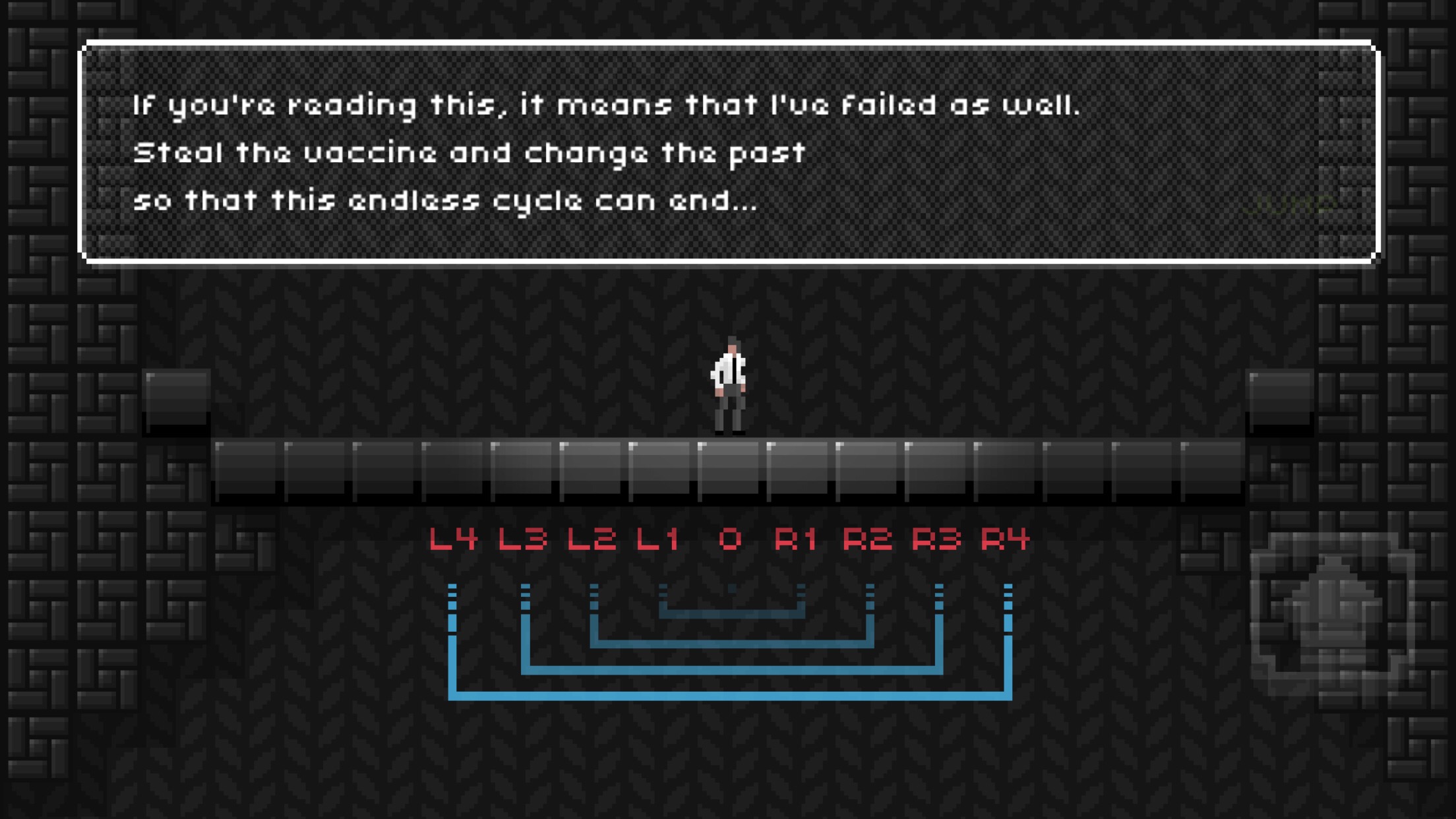 Here’s what really makes it tough, however. You’re not limited to a single flip at a time. As long as you are outside the boundaries of the original flip, you can flip again and again. You can only undo them in reverse order, though, so you’ll need to be careful with that. RETSNOM doesn’t take long before it starts leaning heavily on this mechanic for solving stages, requiring you to figure out all of the various folds and clippings that will cobble together a route. It’s refreshingly free form, but as is often the case, that freedom comes with a cost. Solutions often feel so ramshackle that it’s hard to know if you’re doing what you ought to even as you’re doing it. In the shorter stages, that’s a wonderful feeling, but as things get increasingly complex, it can be really frustrating not knowing if you’re chasing a false lead that will force you to start all over again from your last checkpoint.

For as aggravating as it can be, it’s hard to walk away from RETSNOM. When the mechanics are clicking just right, that feeling of constructing your very own solution is immensely satisfying. The somber atmosphere and slowly portioned out story create just enough mystery that you can’t help but wonder what is coming next. It’s just unfortunate that whatever is coming next is often tucked behind multiple jumping mirror flips, zombie hordes, and false walls. It’s those mid-air flips that often prove to be the undoing of the virtual controls. You’ll need to hold an arrow for direction, hit the jump button, and also hit the mirror-flip button at just the right time, to say nothing of the complications that arrive when the full move set is available. It’s doable, but it adds a layer of irritation on top of what is already a very challenging game.

If you have a lot of patience, the atmosphere and unusual spin on familiar mechanics in RETSNOM might win you over. The open-ended approach to puzzle-solving it encourages is certainly appealing, and the visual and audio presentation both do a good job of supporting the gameplay and story. There are two endings, with the second one shedding some additional light on the events that set the game in motion, and the optional collectibles will challenge your mastery of the mechanics. There’s a lot to like here. On the other hand, the puzzle solutions are sometimes incredibly obscure, and the virtual controls sometimes aren’t up to what the game design demands of the player. If you enjoy puzzle platformers, it’s an easy recommendation, but I’m not sure how enjoyable it’s going to be for those outside of those lines.