Every now and again I like to look through old weekly new game posts to find worthwhile games that may have been overlooked. Especially with the light speed pace of the mobile market. If you like RPG survival games that capture a real sense of struggle with an atmosphere of otherworldly dread, then you’ll probably adore Dead in Bermuda ($4.99) from CCCP and Plug in Digital. The stuff that it does right, it really does right. It’s hilariously (probably realistically) difficult, but it was definitely worth the price of admission, which is way cheaper than an airline ticket to Bermuda and the psychological cost of crashing and having to survive with your wits alone. 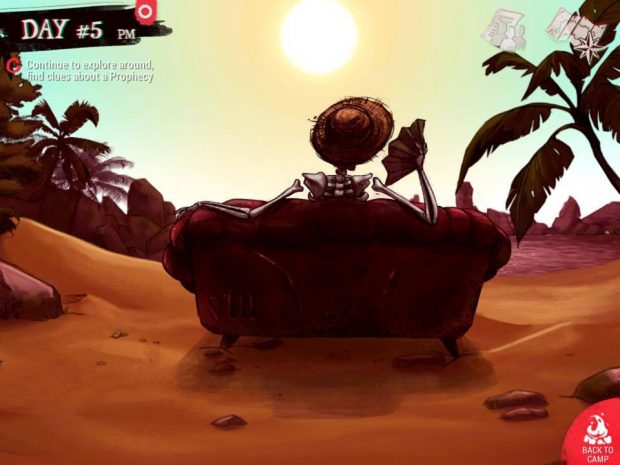 Which is exactly how the game opens up! With a brief little cut-scene that introduces us to our cast sitting in the same area of a doomed plane, waking up, and introducing themselves to us and each other. Most of the tutorial and mechanics are front loaded. Whenever games do this it feels a little clunky and your brain feels a little stretched to take in all the new info at once, but it gets the job done. Your first survival outing will be largely experimental anyway. You’ll learn a lot through trial and error. If I were you, I’d resign to potentially having to replay the first week or two when you have a better handle on things. This is a survival game after all. There is a solid chance some of your crash survivors will not be island survivors.

Survival entails finding food and water (mainly fruit that you use to create water) as well as keeping everyone healthy and sane. The 5 bars of death are Hunger, Sickness, Depression which leads to suicide, Fatigue, and Injury. For a while you can scavenge the plane full of dead passengers for supplies. This only lasts so long before it’s stripped bare, and whomever you send will take a hit to their sanity (depression meter) having to be among all the dead bodies. Perishable food has a chance to go bad over time, and until you have the means to properly cook, meat and fish can add to someone’s sickness. Special consumables like coffee, painkillers, and booze are limited and often come with side effects. And like any Fallout or Elder Scrolls game, certain items like books and magazines can increase someone’s skill points. 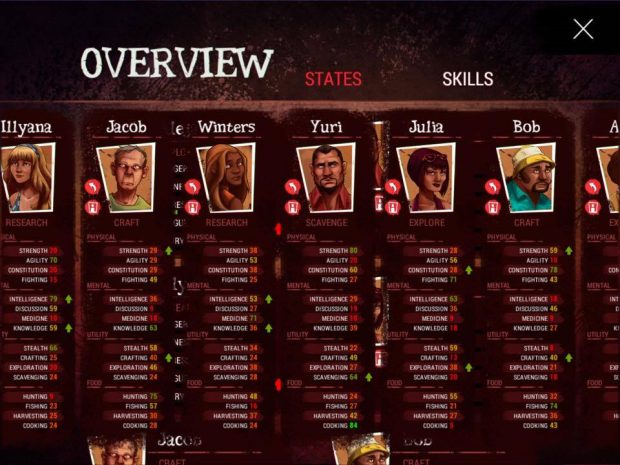 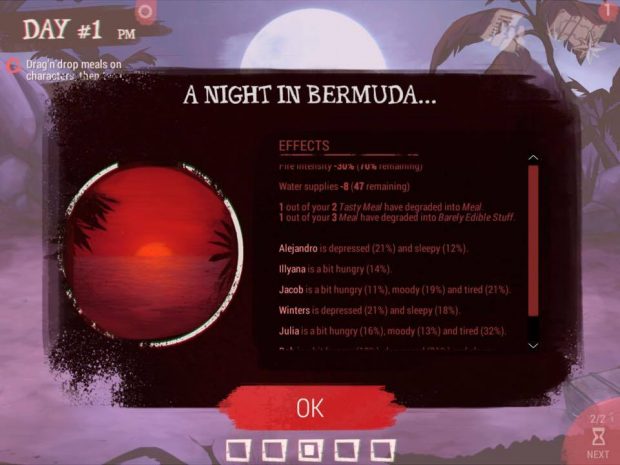 So you’ve got a crew of 8 folks to make good use of. They come in all shapes and sizes with very different skill sets. 16 skills divided into 4 categories, to be specific. Physical skills like Strength, Agility, Constitution, and Fighting. Mental skills like Intelligence, Discussion (Basically sociability), Medicine, and Knowledge. As a quick aside, I like that this game takes note of the difference between intelligence and knowledge. Utility skills like Stealth, Crafting, Exploration, and Scavenging. And finally, food related skills like Hunting, Fishing, Harvesting and Cooking. So… yeah. That’s a lot of stats. Some people are highly specialized in one or two skills, the rest being average to poor, but some people are more well-rounded with fewer strengths as well as fewer weaknesses. Characters will level up the more they work, giving you a random bonus of points to put into whatever skills you choose. But hey, you’re probably not going to be as invested in keeping these people alive unless you know who they are, so let’s meet them.

Alejandro is a decently well rounded guy and is the closest thing we have to a main. Something of a Matthew Fox/Jack Shepherd guy. A cool dude, but not nearly the most interesting one in the cast. We have the paranoid survivalist type Jacob, who is a nasty old codger with a penchant for gathering food who has been preparing for any kind of apocalypse. Winters, who is a brilliant young British doctor that seems unnecessarily cranky and mean in most of her cut scenes. Bob and Alice, who are your classic older suburban married couple. Bob is a portly fella good at fishing and crafting mostly while Alice is great at harvesting, cooking, exploring, and discussion. Finally we have my favorite characters. Yuri and his family. Yuri is a strong silent Russian fella who likes to speak in proverbs. He’s the best. His daughter Illyana is young and fragile, but super smart and great at researching. His new wife, Julia, is stealthy and strong, intelligent, and great at fighting and hunting. She also has something of a secret life in her backstory. 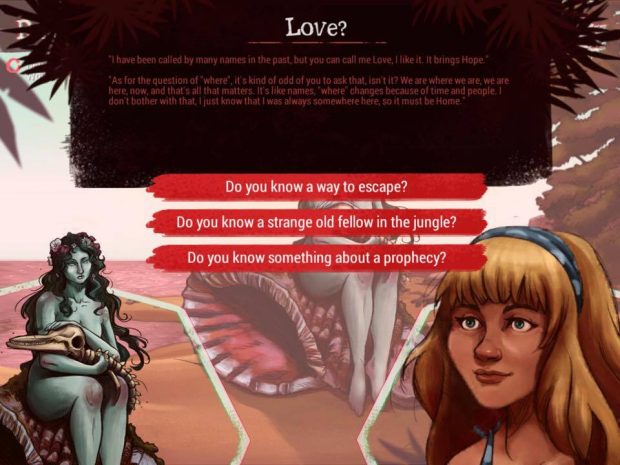 They do a decent job of making you care about most of the cast. In my first playthrough, after 15 days, Yuri was the first to die of hunger. The following night, Illyana was so upset about it that her depression skyrocketed, and she jumped off of a cliff. We aren’t shown these things, so it isn’t graphic, but it’s all quite sad just the same. I’ve made it much farther in my second playthrough, but it’s still a challenge. Surviving this island is a tough affair. Every day is broken into 3 cycles. 2 daytime cycles that you can use however you wish, and a nighttime cycle when you eat, get campfire dialogue, and your hunger bars go up. Even if you’re about to feed them right here and now, if it hits 100%, it’s too late. During the day you can research new crafting recipes, like a campfire stove or tent or fishing equipment. You can also craft whenever you have the requisite supplies. You can make people sit around the campfire and chat if they’re depressed, and sleep if they’re too fatigued. You can scavenge for building supplies, harvest fruit, go fishing, or explore the jungle. Pro-tip. Don’t neglect exploring the jungle but don’t rely on it either. You’ll find a lot of life saving supplies and hunting opportunities in the jungle. But you’ll also find something much more sinister.

This game nails atmosphere like a master carpenter nails nails. It is somber, with a glimmer of hopefulness, and occasionally, when you find certain things on this strange island, intensely strange and foreboding. Things get creepy in a hurry. At first you’ll be attacked by things like snakes, but soon you’ll also be attacked by strange two headed rabbit monstrosities and weird bats. You’ll also find unfathomable sights, like a skeleton lounging on a couch on the beach, or you’ll encounter the strange blue skinned denizens of this island, who sometimes can speak with you. You’ll hear talk of prophecies from mad men and see corpses in states of being that they ought not be, and this game slowly reveals the horror DNA within. None of it is over the top or gory, but all of it is unsettling. I love stuff like this. 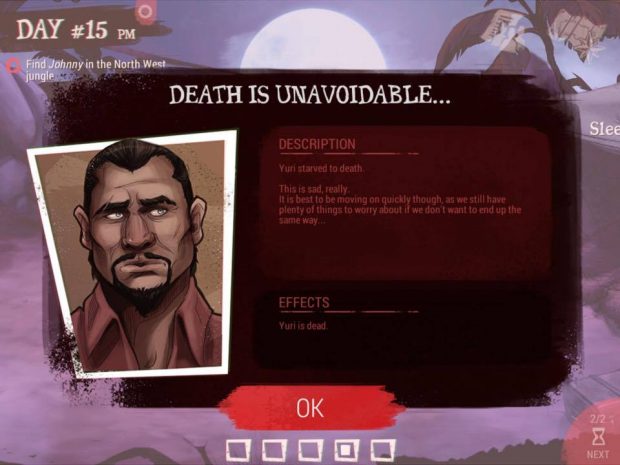 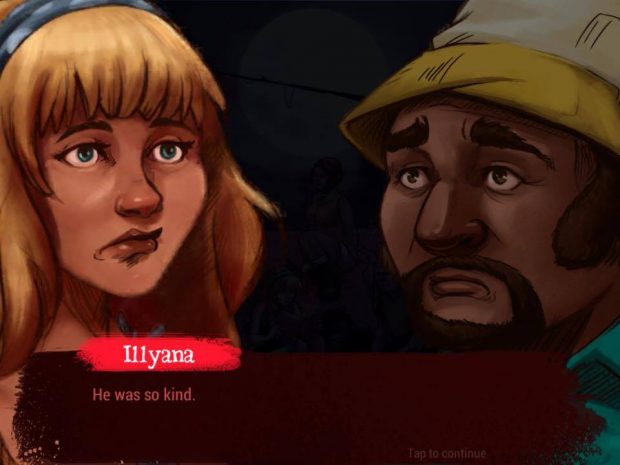 Managing all of your bars and getting the most efficiency out of each day is tough. The more tired your characters are, the lower their effective skills will be. If they’re performing a task with a group, how much they like every other member affects performance as well. Several traits or story events that affect relationships and stat progression are randomized, so you won’t get the same exact series of events each time you play. You can let the group explore automatically and decide where to go, or you can direct them, which also mixes things up. Some encounters involve one time choices and choose your own adventure elements. So there’s a lot of replayability. The best part is that you can load up any specific day from any play through if you messed up too badly. You don’t have to start from scratch.

It’s definitely a difficult game, but I was enamored by it, and at this point I desperately just want to conquer it and get more of the bizarre story. Is there a twist ending? Are they in some kind of purgatory or limbo? Do they escape? The game makes you earn the answers to these questions. It’s not a perfect game, and unfortunately it’s crashing on several devices. Not once on my iPad Air 2, thankfully, but definitely be aware of that. Sadly I think this port not being up to snuff on all hardware is keeping a lot of people from enjoying it, but it was released on Steam last year if you need to find it there instead. It was very well received and the developer are hard at work on a quasi-sequel.