Everyone has a genre they couldn’t live without. For some youngsters, it’s survival games, which can extend to Minecraft. For others, it’s sports games, and the thrill of drafting out a new fantasy team with incoming college players thrown into the fray. For me, my choice ebbs and flows depending on the year, but the most consistent one I’m always falling back on is platformers. Whether it’s those of the mascot variety with strict adherence to 3D standards and wonky cameras, or the tried and true 2D approach, you can put pretty much any one of them in front of me and I’ll at least give it a go. Tons of Bullets ($1.99) caught my eye in name alone, but it ended up being about more than just blasting things. 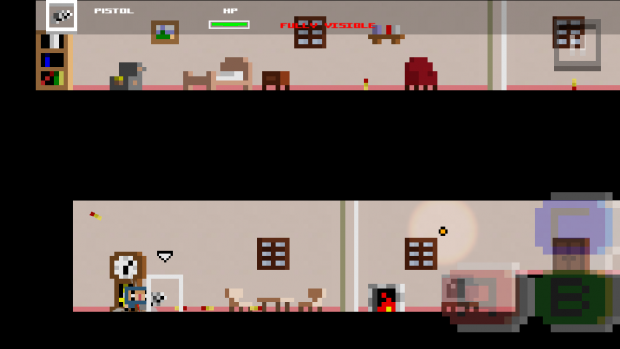 In a setup very similar to the wall-clinging platformer Meat Boy, Kenji is a ninja that’s on an adventure to save his love interest from Dr. Mad. Naturally, ninjas have a little more at their disposal than the average protagonist, and in addition to his agility, Kenji also has access to a few tricks like the aforementioned wall jumps. If you’re fed up with touch controls it offers MFi controller support, which works wonderfully for the precision double jumps you’re going to need to get by. This is just as much about mastering the controls as it is hammering out twitch responses, so don’t be afraid if you’re more about exploration than action.

I’m conflicted on the look the development trio ended up going with ultimately for Tons of Bullets though, despite their victories with the fundamentals. While it’s functional to the point where most of the jumps you’re going to make won’t be confusing in any way (the same goes for figuring out what is and isn’t an acceptable stealth state), it could be a lot more impressive than a basic pixelated presentation. Looking at the announcement art it follows a voxel-like style that’s like a brighter, more cartoony Minecraft, and that’s really what the teams at play should have went with. Games have done this before without going too flashy, and a follow-up with a more pronounced look would go a long way. 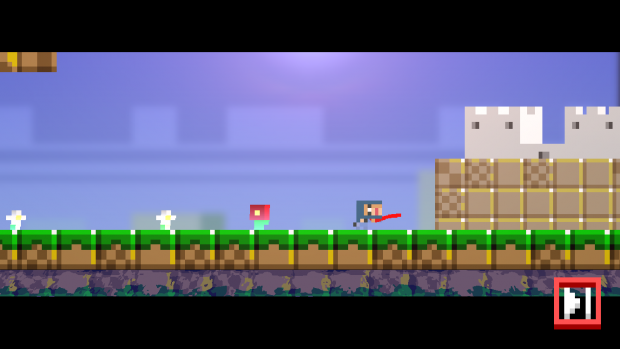 Like the League of Evil series, which ended up being just that — a series — there’s a lot of potential here to build on this premise and keep rolling with it. Kenji isn’t exactly what I’d call a memorable character but he’s recognizable, and even though just by looking at a selection of screenshots you probably won’t walk away all that impressed, after actually playing it, it’s something I could pick up out of a lineup. Bosses could stand to be more unique, but the enemies, layouts, and themes are great.

But while it doesn’t really do anything new, the good news is that it packs in pretty much everything you’d expect from a Metroidvania platformer. There’s a number of different action  and platforming concepts, delivered every 20 minutes or so. That’s pretty much the perfect pace too, because just as you’re learning something and start to pick it up for future runs, something new comes along. The entire system of jumping is so complex that it allows for some great, open levels, and although the idea of kitting out a ninja with guns is silly, actually works in its favor in tandem with that openness.

As a bonus (which is kind of a rarity these days) you’re buying the full game here, with no IAP involved. It’ll last you roughly an afternoon, but that’s if you’re playing nonstop. And while I enjoyed my first playthrough, I wouldn’t really consider springing for a new one for some time, until the layouts are mostly removed from my memory. There were enough secret areas or zones off the beaten critical path for it to be worth  replaying it so soon.

As long as you go in with your expectations in check forTons of Bullets — as it has literally no surprises for you in store — you probably won’t walk away disappointed.  You’ll stumble into re-used ideas like teleporter pads, straight-forward boss fights, and vehicles, but you’ll have fun doing it. Hopefully the idea well hasn’t run dry, and the teams responsible can pick up right where they left off for a sequel.