Back in the spring of 2014, the original Flappy Golf became an unexpected hit for developer Noodlecake Games. Originally a product of a Flappy-themed game jam, and seemingly aimed as a sarcastic statement about the Flappy Bird craze at the time, it turned out that the flapping mechanics that had created such an uproar in Dong Nguyen’s breakout hit are actually a perfect fit for Noodlecake’s brand of side-view golfing seen in their popular Super Stickman Golf series. Yes, for once the flapping actually made for a seriously interesting mechanic. Now, more than two years after the original, Flappy Golf 2 (Free) has arrived to provide more of what we loved. 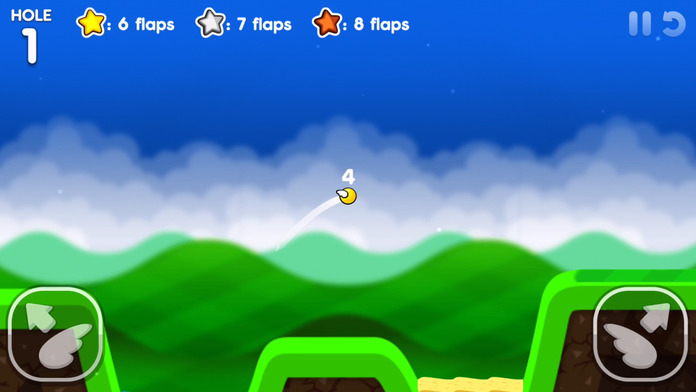 Much in the same way the original Flappy Golf nicked its golf courses from Super Stickman Golf 2, Flappy Golf 2 features the courses of the fantastic Super Stickman Golf 3 which was released over the summer. You’ll play across 29 courses (with more coming) to see if you can get your winged ball in the hole in as few flaps as possible. To be honest, it’s not exactly a grand leap forward from the original game, but then again, it doesn’t have to be. This is more Flappy Golf and that is precisely what most Flappy Golf fans crave. It also features local and online multiplayer, and if you’re a bad enough dude or dudette to earn all Gold on all levels, you’ll unlock the fiendish Super Star Mode.

Again, this is all pretty much par for the course (see what I did there?) for a Flappy Golf game. However, as with the first game, I’m fascinated by just what it is that makes Flappy Golf 2 work so damn well. The answer? The flapping physics are exquisite. That sounds like a joke statement, but I’m serious. The inertia of your flaps and how it increases with each subsequent flap as well as the gravity in the game is just honed to perfection. It’s what makes the game so compelling. You can start a course and see the number of flaps needed for Gold and think, “That’s not even possible!" Then you realize if you finesse the flapping and learn the tricks of each course, anything is possible. It’s one of the most surprisingly satisfying feelings I’ve had from gaming.

So yeah, Noodlecake didn’t reinvent the wheel here, but they didn’t have to. Flappy Golf 2 is perfection. Well, except for one possible blemish: You can’t pay to disable ads. To some, this is a HUGE deal, to others it’s not a big deal at all. Then there’s people like me, who aren’t crazy about the ads, but would never let their inclusion prevent me from playing such a phenomenal game. For what it’s worth Noodlecake is mulling over if they’ll add an ad removal IAP into the game, but according to them the first game’s ad removal IAP only accounted for one half of one percent of all their revenue. Basically, almost non-existent.

However, as you’ll hear me argue on this week’s podcast, I believe there’s value in catering to this tiny slice of Flappy Golf 2‘s audience. Whether that value outweighs the time, effort, and money that would go into including the ad removal option, not to mention if it would negate the dreaded “Offers In-App Purchases" label the game would receive in the App Store which can be a turnoff to some, remains to be seen. We’ll have to wait and see what happens on that front, but for now, if you were a fan of the original Flappy Golf you’ve probably already downloaded and Gold-starred all of Flappy Golf 2, and now you’re just kicking peoples’ butts in online races. However, if you have yet to experience the Flappy Golf phenomenon, or were turned off originally because it’s a flappy game, definitely give the free game a download and see what all the fuss is about.