It would be extremely easy to start this review by alluding to the ironic self-deprecation of the title, and affirm how Really Bad Chess (Free) is actually a Really Good Game. However, in truth, the title is not too far off the mark. Compared to the balance, strategic depth, and elegance of the age-old board game, Zach Gage’s most recent release is really bad chess. It is highly likely you will start a game with an abundance of the most powerful pieces versus a far weaker opponent, and it will likely not take as much tactical meticulousness to break down their defence; anyone looking for a chess simulator will undoubtedly be disappointed. However, once preconceptions of similar titles are left behind, Really Bad Chess manages to turn a tiresome, tricky and intimidating game into one perfectly suited for the immediacy of mobile gaming. While it may share similarities in the pieces, and how they can move, to the game it takes its name from, Really Bad Chess is an entirely different beast. Through prioritising unpredictability and offensive play over experience, Zach Gage has crafted an essential puzzle experience for anyone even remotely interested in strategy games on the App Store.

That being said, don’t go into Really Bad Chess expecting a revolution, because the game is basic at its core, and chooses to focus on its strengths rather than try and make itself out to be more than it actually is. The key mechanic in Really Bad Chess is that, at the beginning of the round, rather than being allotted the standard collection of pieces, you will be given a random variety that responds to your rank, and therefore your perceived skill level at the game. For example, in earlier rounds you may receive multiple queens and rooks, while your automated opponent will be fraught with pawns, knights and bishops. Otherwise, Really Bad Chess plays like normal chess – no gimmicks or power-ups, purely a focus on the purity of the game. While as you win games and your ranking increases your advantage will eventually deteriorate, this handicap mechanic – and the sheer unpredictability of what pieces you will get and where – goes some way to levelling the playing field between those with experience of chess, and those who may be playing it for the first time. Experts will have to drop everything they know about chess and adapt to an entirely alien game, and likewise, beginners will be able to learn the strengths of each individual piece and adapt to an entirely alien game. 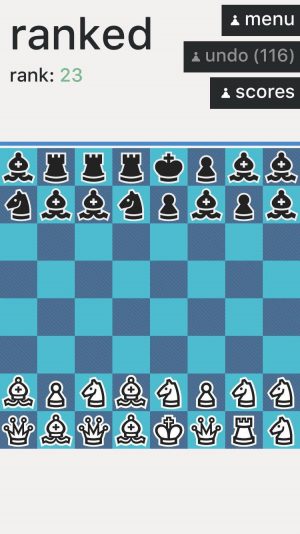 This accessibility makes Really Bad Chess so versatile in its potential audience – however, there is a reason why the traditional version of chess does not start with three queens. With such an eclectic set of pieces on both sides, there are occasions where long term thinking and methodological tactics – where the player is forced to try and look several steps into the future – is thrown out the window for pure offensive play. The traditional trade of a bishop for a knight, or a rook for a rook, is always going to favor the player with the advantage, and so at first winning games is easy through blindly taking whatever opposing piece you can. Really Bad Chess manages to compensate for this somewhat through an AI which never changes in difficulty. From the very beginning, the computer will make the perceived best possible move with the pieces it has in an attempt for victory, and so careless mistakes, such as leaving a queen exposed, will quickly be capitalised on. Through this combination of a fair playing field based on ability and a resolutely merciless AI, Zach Gage has managed to strike the perfect balance for complete newcomers to learn how to play chess. After making numerous inevitable errors, and through a generous undo button, most players will begin to consider moves carefully and learn the risks and rewards of certain approaches. 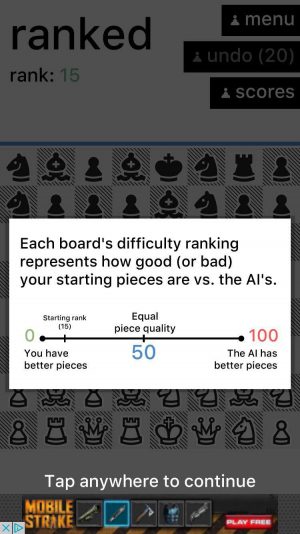 However, regardless of mistakes made, and notwithstanding the difficulty of the AI, newcomers will almost always succeed because of the dramatic advantage in the starting pieces. Coming from the perspective of someone with a degree of experience of playing chess, even a win that was relatively comfortable was always immensely satisfying, so I cannot imagine the contentment of someone with less knowledge of the game to beat the computer and climb the rankings ever higher. Numerous game modes also help to shake up the formula and keep the experience fresh. A Daily Board – which, as the name implies, changes every day – lets you challenge an especially highly ranked setup and try and beat it in the lowest number of moves, however only gives you one chance to complete it before the option becomes locked. Similarly, a Weekly Challenge mode gives you a set board to beat each week, but is even harder – this time, thankfully allowing multiple attempts to success. These two modes, on the surface, may appear to be simply derivative of the main ranked mode, but in truth act as Really Bad Chess’s own multiplayer component. As everyone in the world gets the same board each day or week, there is bound to be competitions amongst friends, on the internet, and in communities about who can complete the challenge in the least moves, or even simply communal help on finishing a specific task. Coupled with online leaderboards, these modes take Really Bad Chess from a solitary, introverted simulator against an AI, to one that has significant potential to reach a larger, connected audience. 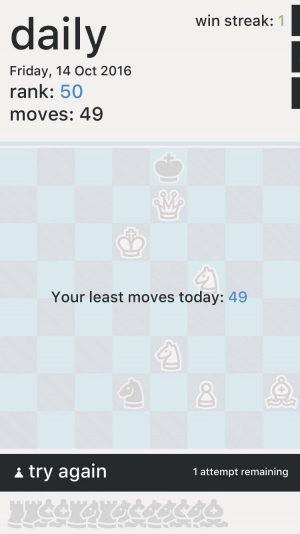 A point of contention with any free App Store release will be its in-app purchase system, and while many will be glad to know Really Bad Chess features unobtrusive adverts and doesn’t attempt to push any potential purchase, such generosity in the amount of content in the base game overshadows the $2.99 full game unlock somewhat. This is by no means a criticism – I’d happily pay far more than three dollars for a game such as Really Bad Chess, and the alternate color schemes, removal of ads and extra undo tokens are definitely cool additions – and if anything reflective of the quality of the free portion of the title, but such DLC would be far more enticing if it included some other modes, or even unlocked some of the already present options such as the daily board. You can also purchase Undo tokens at 100 for $0.99, or earn five through watching an advert, which will likely come in handy in the long run once the initial twenty (and further 100 from the full game unlock) are quickly burnt away. While some may be unhappy with no option for an unlimited undo purchase, I think the lack of such an option was a very clever move, as it forces you to consider every move you make, and through trial and error eventually improve your skills enough to stop relying on the crutch that is the undo option.

Having spent a thousand words trying to dissect the intricate details of the game, it is extremely evident how clever Really Bad Chess actually is. On one level, Zach Gage has managed to turn what may appear to be complex and unwelcoming strategy game for beginners into an exciting, offensively minded experience where novices and experts can, to quote the developer, ‘discover the joy of learning how to checkmate’. However, while this statement certainly is true, Really Bad Chess manages to be more than it may appear on the surface, as through the intrinsic unfamiliarity that the randomisation of pieces causes, the app becomes a way for both beginners and veterans to learn how to read the board, react to contrasting scenarios, and eventually become better at the game. This accessibility, and how it has managed to turn the relatively mundane task of learning chess into an extremely enjoyable experience, is mightily impressive, and even more so when you consider than none of this has been accomplished through excessive gimmicks or trying to reinvent the board. Really Bad Chess isn’t really bad, because it isn’t really chess – it’s something better.