Hello, gentle readers, and welcome to the RPG Reload, the weekly feature where cats calm the raging insanity inside us all. Each week, we take a look at an RPG from the App Store’s past to see how it holds up today. It’s a chance to revisit old favorites, reflect on their position in the overall market, or simply to take a deeper dive than our reviews typically allow. Supported by my assistant who appears in the form of a hologram that only I can see or hear, I try to choose a balanced plate of games that represents this big, wide genre. If you feel I’m missing something important, though, make sure to let me know. You can do that by posting in the comments below, dropping by the Official RPG Reload Club thread in the forums, or by tweeting me at @RPGReload. Since the schedule is planned far in advance, I might not get to your suggestion soon, but it will be added to the master list. 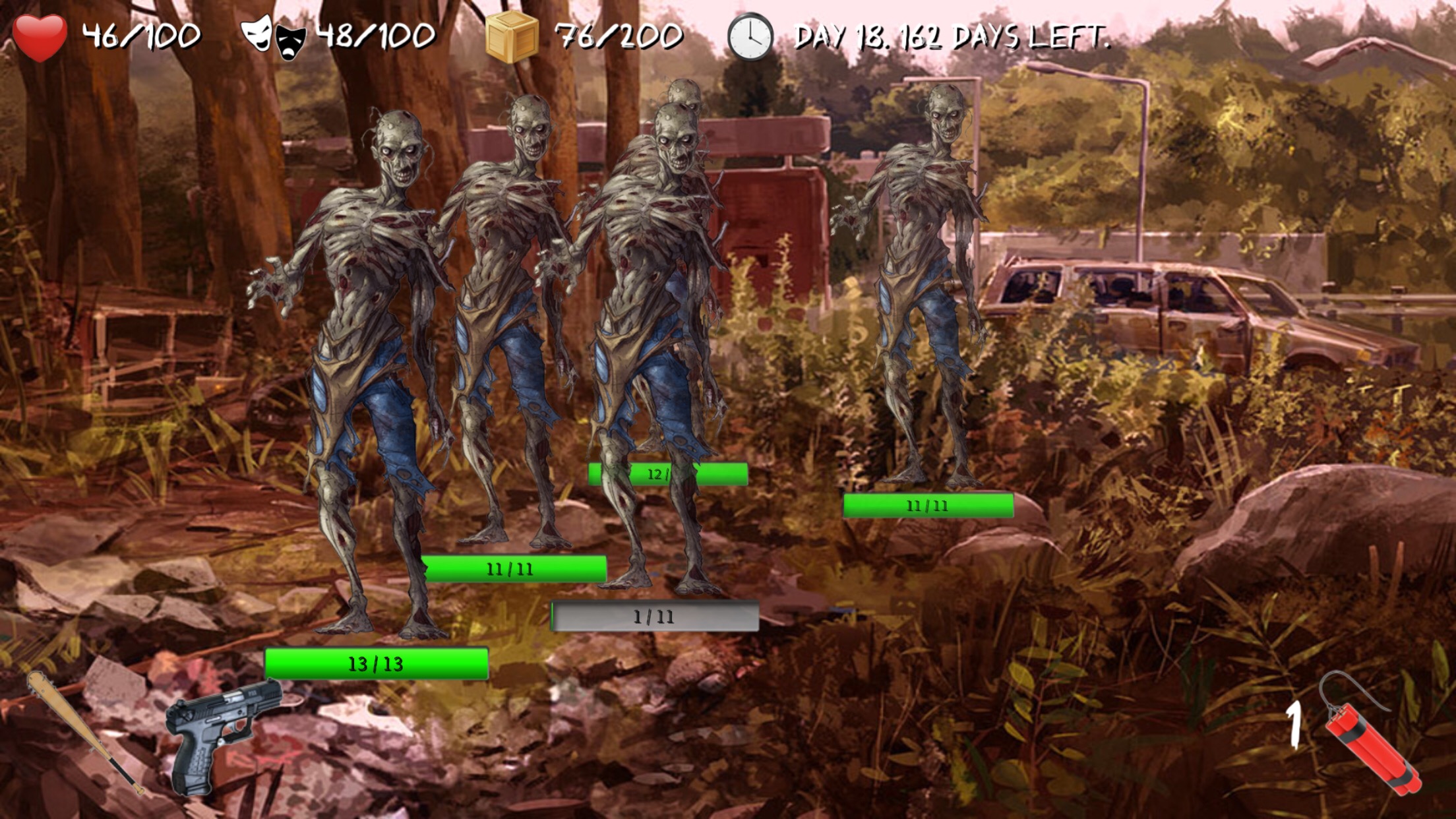 Usually when I do a Reload, I try to bring some fresh perspective to a game or, failing that, at least try to spin a nice, nostalgic yarn. That job becomes much more difficult if I’ve already written a review of the game in question, and harder still if the game hasn’t changed much in the intervening years. The quirky survival RPG Overlive ($2.99) has gotten quite a few excellent updates, but the things that make the game unique and interesting honestly haven’t been greatly affected. Thus, before we go any further, I’m going to direct you to the review I wrote way back in January of 2014. It explains the mechanics in detail and does a pretty good job of covering the game’s basic appeal. After you’ve done that, come on back here and we’ll see what I can muster.

FireRabbit is a small, two-person Canadian developer that was founded in 2011. They’ve released quite a number of games on the App Store and other markets, with their bread and butter seemingly being a series of games centered around rebuilding cars. Most of those games are free-to-play with IAP support. Overlive stands as an unusual anomaly in their line-up of games. While there’s a lite version available, the regular version of the game is a paid app with no in-app purchases. It’s a much longer and more fleshed out game than most of their other games that I tried, and I wouldn’t be surprised if it was something they poured their hearts into. After all, the game still gets significant updates now and then, and there’s no way it’s making enough money these days to actually cover those. 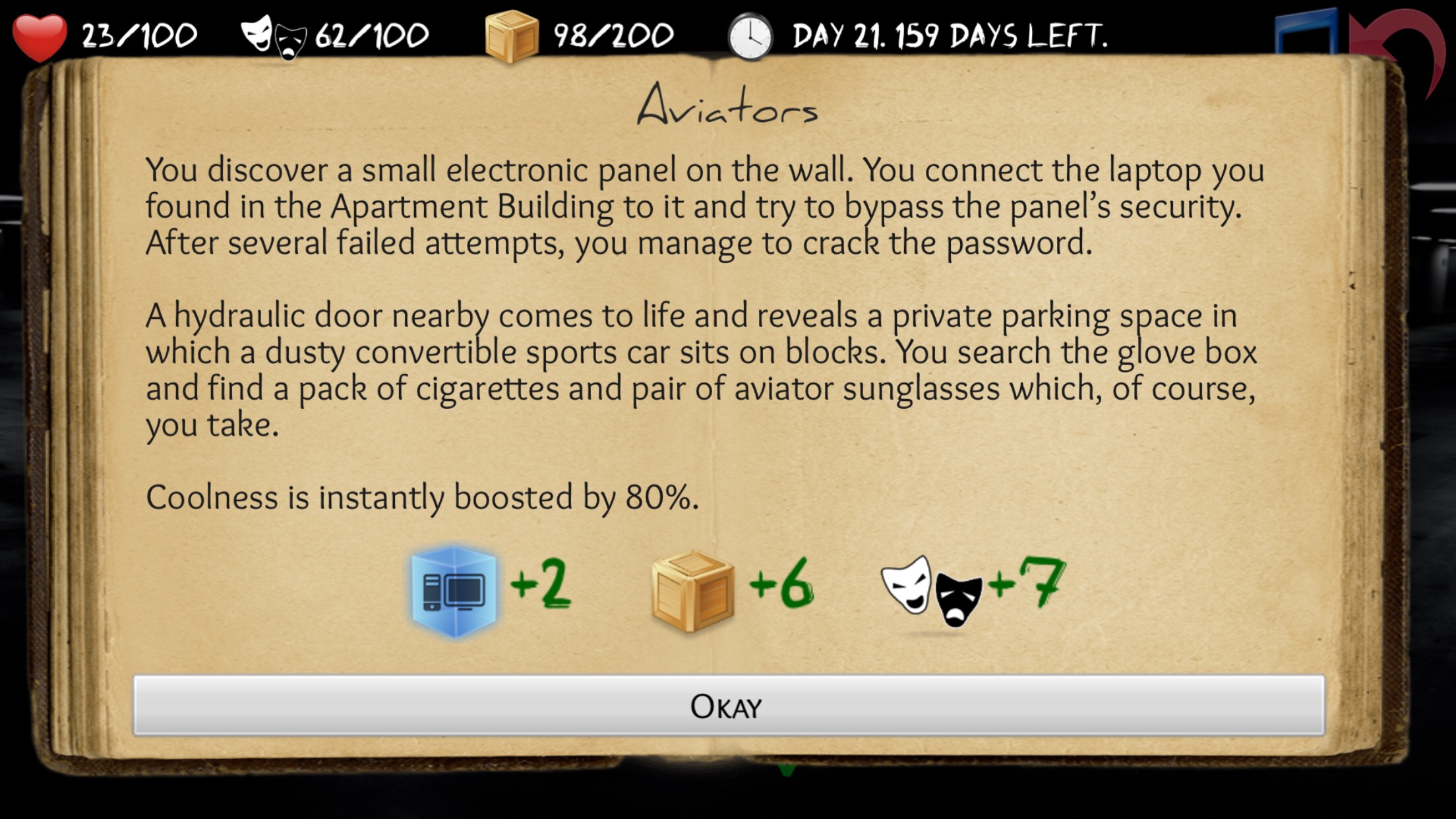 You can feel that love when you play the game, though. Yes, it doesn’t look great in action. It has an incredibly ambitious design and it might have been more than such a small developer could chew. The battles in particular look incredibly low-budget, even after all of the improvements FireRabbit has made over the years. If you can get past the presentation, however, it’s impressive just how close this game comes to achieving its lofty design goals. It’s packed with things to read and events to play through. While it can’t always show you everything it wants to, the text does a great job of taking the burden off of the visuals.

It’s a huge game, too. You can play through it repeatedly and run into completely new branches of the plot each time. Although Overlive is structurally quite similar to a gamebook, the way it chooses to present itself makes it feel bigger than words on a page, particularly on a replay. Going through a gamebook a second, third, or fourth time involves a lot of flicking through pages you’ve already read and simply going another way. You’ll come across some of the same events each time you replay Overlive, but unless you’re going about things very methodically, it never feels like you’re just fast-forwarding to the path not chosen. 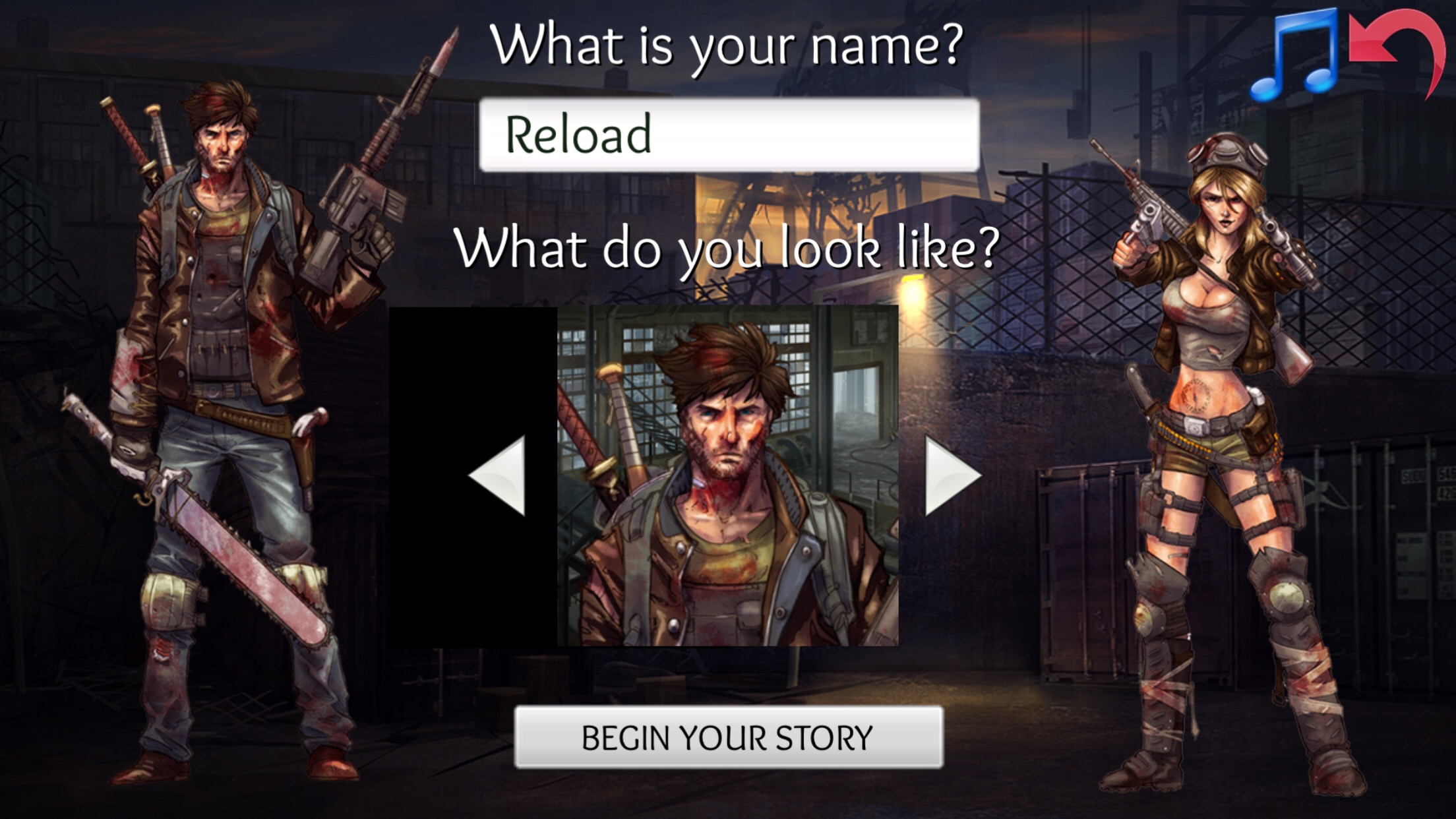 As I said in that review, a key part of the game’s appeal is in that you don’t have time to do everything. Your health is technically infinite, but your time is always ticking down. Unless you’re playing in the free mode. In which case, good job ruining the game for yourself, buster! In the other two difficulties, however, your time is limited and you have to make some hard choices. I still remember my first playthrough of the game where I approached it the way I approach any RPG: by taking my time and trying to do everything. That did not go well, I can assure you. It’s an enormously hard thing for most RPG fans to do, but you have to learn to walk away from a room once you’ve found what you need from it.

Of course, for that to work, you have to actually know what you’ll need, and that’s more or less impossible on the first playthrough. In that respect, it feels a little like an adventure game, but it’s a lot less strict than the average game in that genre. Many problems have at least a few different solutions, and while there is definitely a best and worst ending, the rest of the lot feel about the same. It’s really just about making it to any ending except the worst one. If you can do that, you’ll probably know everything you need to do to find most of the others. Since I didn’t have the time to hunt down every ending for my initial review, I had some new ground to cover in this Reload. That’s a rare case, and it made this revisit quite enjoyable. I had to break my habits all over again, though. The first time I replayed Overlive for this article, I made the same mistakes that I did in my very first playthrough. 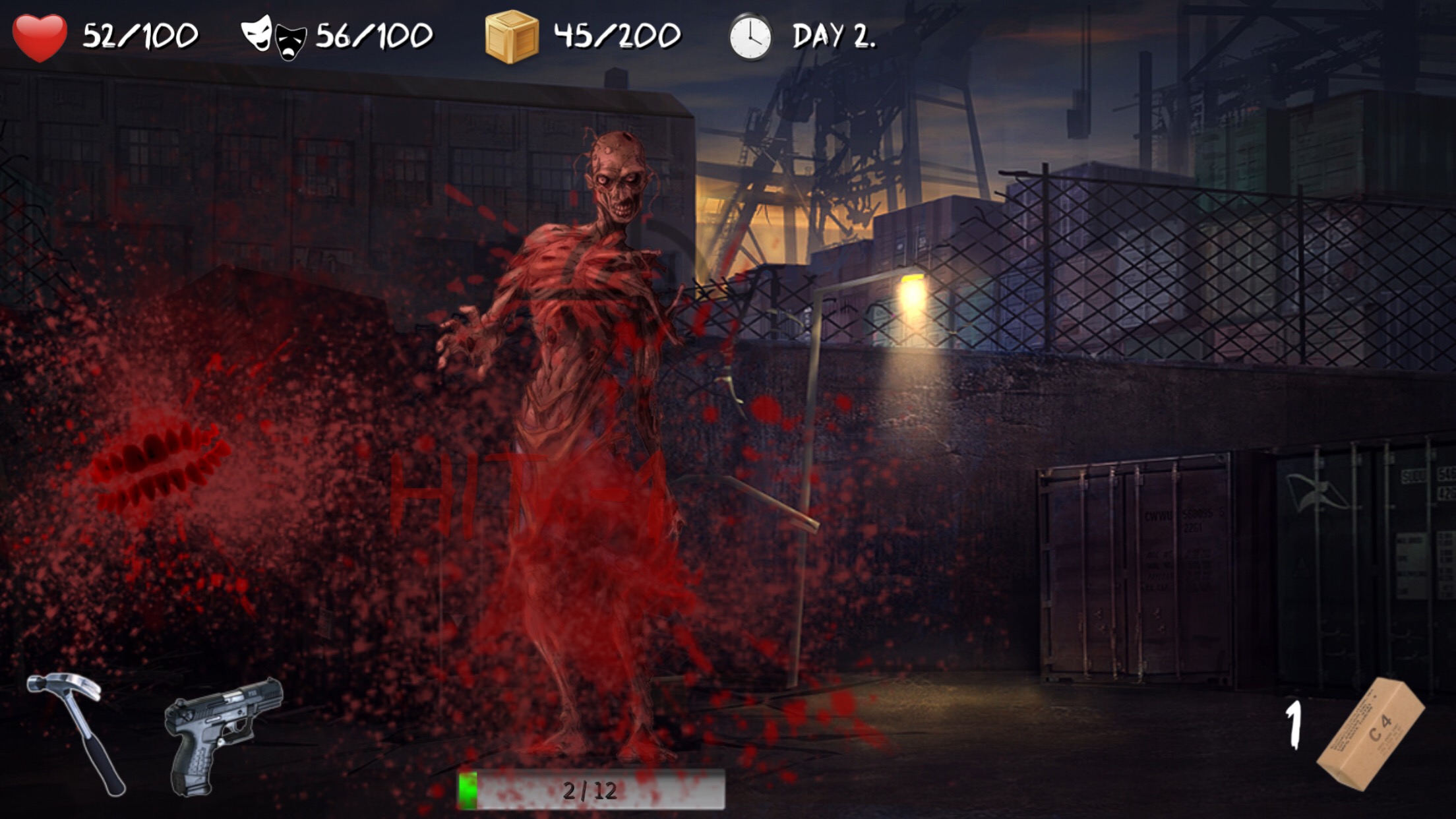 It didn’t take me long to find my rhythm, though. It’s important to set some time aside for training, and you’ll want to be careful about taking on more than you’re prepared to handle, because the time loss from failing an action scene can be significant in the grand scheme of things. I was reminded of how much I enjoyed the writing in this game, too. It walks a fine line between being just serious enough to create an oppressive mood without being too heavy. There are a lot of pop culture references, silly jokes, and moments of earnest bravado to give the game a unique flavor. Sure, it may be a zombie apocalypse, but as far as the game is concerned, you’ve got this well in hand. Well, probably.

The scope of the game is surprisingly large once you start digging into it. In that respect, the meager presentation is something of a boon to the game. I can’t imagine trying to present everything that happens in this game in more advanced visuals. It would certainly be out of the reach of a small indie developer. So instead, the game uses simple still images and text to lay things out, which allows it to do just about anything it wants to. Even the silly floating non-animated zombies in the combat scenes can be effective in one sense, because when there are a bunch of them on screen, slowly advancing, taking bites out of me while I try to reload my gun, I absolutely feel tension. I watch my HP go down, and I’m frantically trying to squeeze off more shots because I can’t afford to lose the time. It just works. 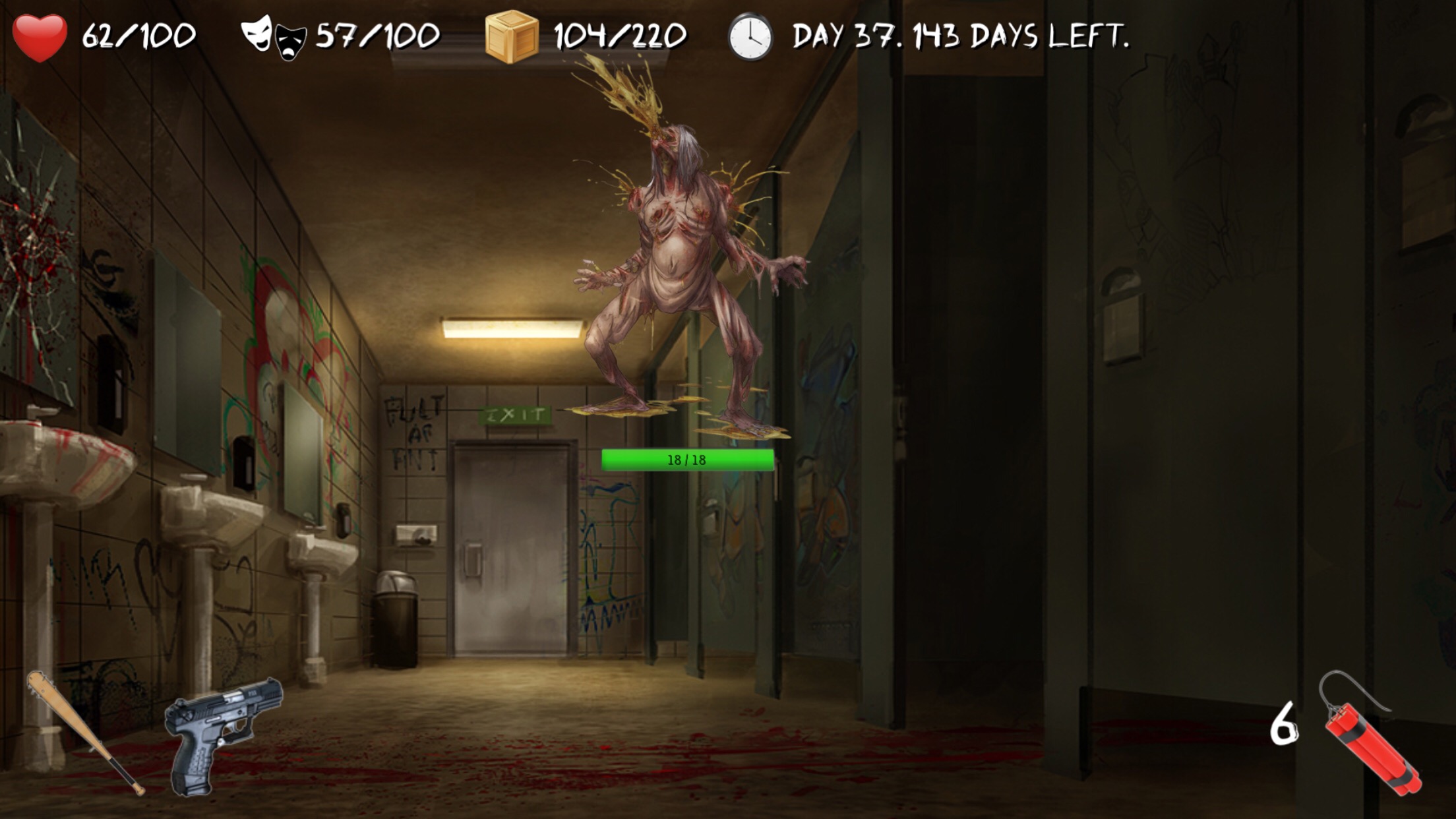 I ended up having a lot of fun playing Overlive again. It was unique almost three years ago, and it’s still pretty weird today. It’s been well-maintained by its developers, and I suspect it will continue to see support into the future, so it seems like a safe purchase to me. Even beyond maintenance, they’ve improved the visuals and UI, added extra content, and so on. You have to be able to push yourself over the hump of its economical appearance, but if you can do that, it’s quite a fantastic melding of RPG, interactive fiction, and adventure game. It’s the perfect thing to dig into during the Halloween season, and due to its many paths and random factors, replays are wonderful.

That’s just my take on Overlive, though. What do you all think? I want to know, so please post your comments below, stop by the Official RPG Reload Club thread, or tweet me at @RPGReload. We’ll be talking about this game on the RPG Reload Podcast this month, so be sure to send in any questions about this game or any other RPG to [email protected] and we’ll answer you on air. As for me, I’ll be back next week with another Classic Reload. Thanks for reading!