In the past week, I played two zombie survival adventure games, which is two more than I played in the last full year. It’s not that there aren’t tons of great zombie games out there, it’s just that as a concept I feel like the game industry has done a pretty good job of exhausting it, so it takes a lot to get me invested in the theme these days. One of the two titles I played was The Walking Dead (Free), a game I’d heard nothing but gushing praise about and felt I needed to check out. Well, I’ve now seen it all the way through, and yes, that was really something. At the same time I was making my way through that, I was also playing Overlive: Zombie Survival RPG ($2.99), and you would think that with a similar genre and theme, there would be a long shadow there that the game might not be able to shamble out of. Well, Overlive isn’t as good as The Walking Dead in a general sense, but it does do a lot of interesting things that make it worth checking out for adventure fans.

The story setup of Overlive is very familiar, with you playing as a survivor in an apocalyptic zombie-infested city. The basic goal of the game is to find a way out of the city, and there are a lot of ways to go about that. The game bills itself as an RPG, and there are certainly RPG elements at play here, but it’s really more of an adventure game in its execution. You need to explore your surroundings to find new locations and items to help you make your escape. You will quite frequently run into the undead, and when that happens, you’ll have to fight, but the consequences of losing a battle here aren’t what you’d usually expect. You’ll always bounce back from running out of health. The real enemy, and what you need to keep tabs on, is your time. 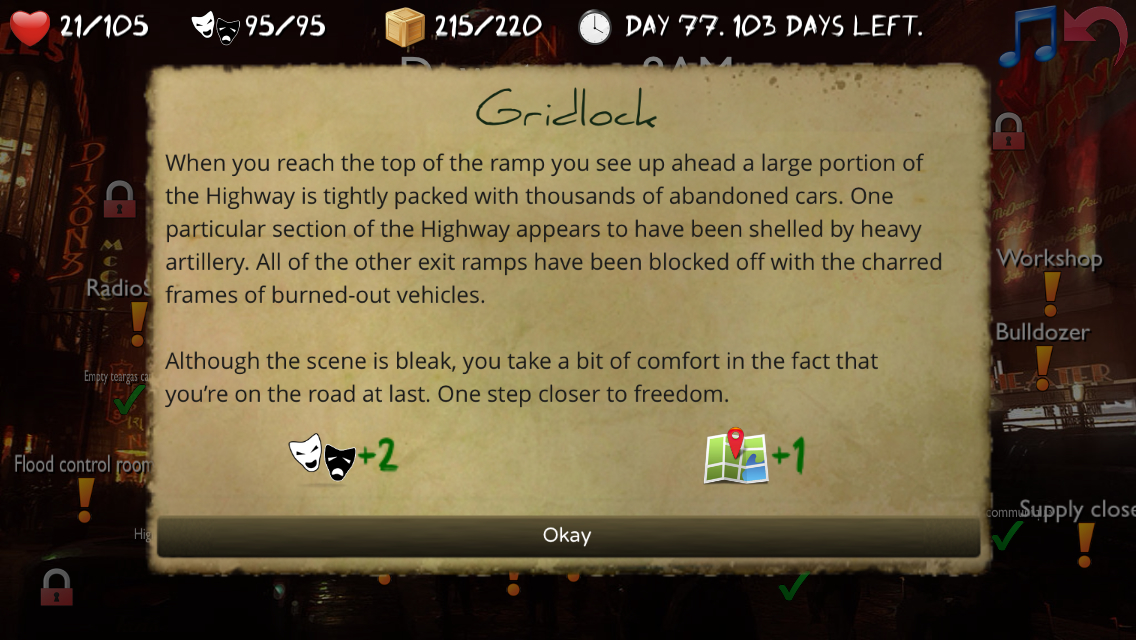 You see, after 180 days, your city will be leveled by a nuclear meltdown. If you’re not out by then, congratulations, you’ve uncovered the easiest-to-find ending. Every action you take in this game uses up time, and you absolutely do not have enough time to do everything. Even without multiple endings, you’d probably be replaying this a few times just to check out what you missed, so while this game technically isn’t all that different from a gamebook, there’s a lot more replay value than usual. Of course, none of that that would matter much if the writing wasn’t enjoyable, but Overlive has a very sly sense of humor and a heaping helping of genre savvy that makes even unimportant text fun to read.

From your home base at your apartment, you can choose to spend your time resting, training, or exploring. Resting will recover your physical and mental health at the cost of a full day. How much is recovered depends on how nice your apartment is. You’ll often find items or perform actions that make your apartment a more comfortable place, which will increase the effectiveness of resting. Training allows you to choose an activity to improve your stats, at a cost of time and supplies. As you play, you might uncover new types of training. Improving certain stats is the key to uncovering some of the endings, so you shouldn’t ignore this option even if it doesn’t seem immediately useful. 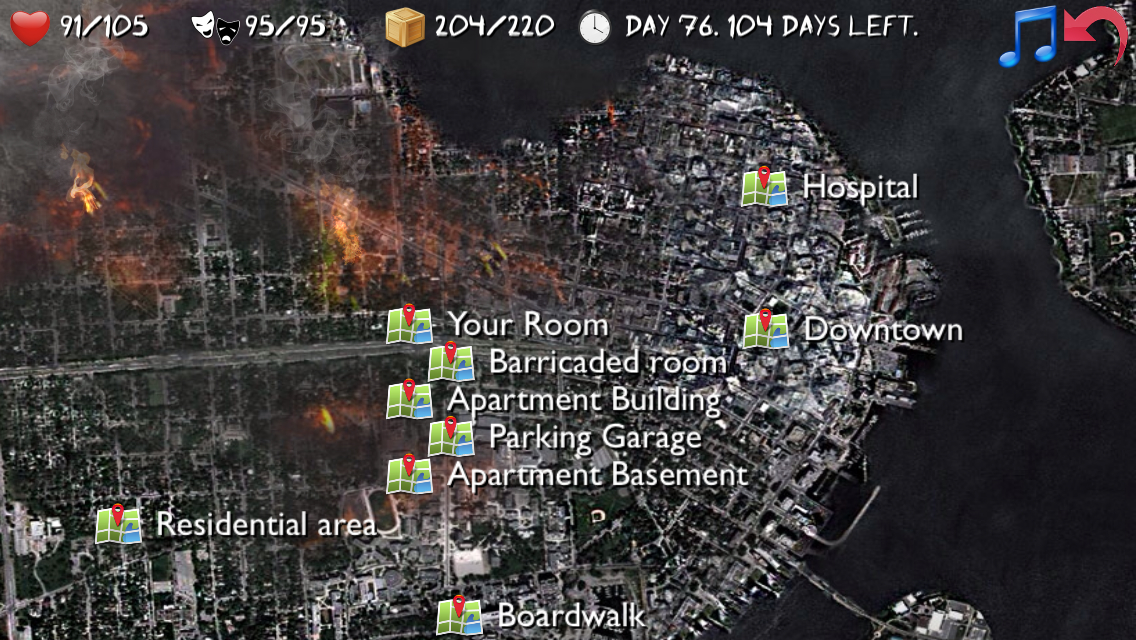 The bulk of the game is going to be spent exploring, however. When you choose this option, you’re shown a map of the city with locations marked on it. You have to discover a location before it will be displayed here, and even once you’ve discovered it, you need to be able to get there. Some locations require you to find a vehicle of some sort first. After choosing a location, you’ll be presented with a static screen full of locked events with one single starting point. Following that along will open up more choices, and following up on those events will open still more. Each event you click on will cost you one hour, and many of them will lead to either a stat check, combat, or both. To keep things interesting, each time you visit a location, the position of the event markers on the screen is jumbled around. You can see which events you’ve already checked out, of course, but locked events will always change position, so you can’t just memorize the exact spots for the optimal path.

If you get into a fight, you’ll enter a separate battle screen. Static images of zombies and other creatures will slowly move towards you, attacking whenever they can. You have three ways to attack the enemy. You can tap on them to fire your gun, which can hit from a distance but costs valuable supplies. You can wait until they’re in range and swing at them with a melee weapon by swiping, which doesn’t cost you any supplies but puts you at high risk of incurring damage. You can also drag explosives onto the bad guys, which does heavy damage and can hit multiple targets, but comes out of your valuable stockpile with each use. These battles play out in real time, and there can be an absurd number of enemies on-screen at once. Make sure you save up those explosives for the really tough battles.

If the enemies knock your health down to zero, you don’t get a game over, but you’ll fail whatever event you were working on and be sent back home for the day. Resting up to full from zero health can take days, so don’t be too careless. Any failed events can be attempted again, which is good, because you’re going to fail a lot until you get your stats upgraded. Events have a variety of outcomes. Sometimes you’ll find supplies or items, sometimes you’ll gain or lose stats, sometimes you’ll uncover a new location, and sometimes you’ll just get a bit of flavor text. One of the things I really love about this game is just how much stuff there is to find. There are lots of little surprises and finding certain items that might seem unimportant at the time can really help you out in unexpected ways in the future. 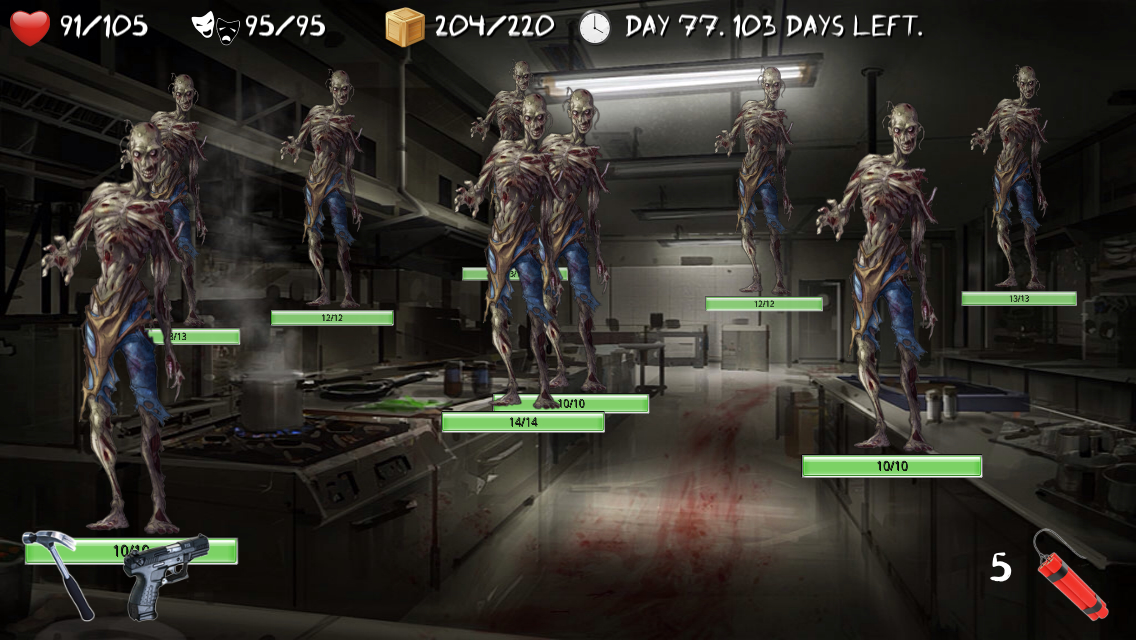 The game doesn’t make a lot of real stabs at drama, instead opting for a bit of a cheeky tone that keeps things from feeling too serious. It’s not that there isn’t serious stuff going down, but the main character seems very ambivalent about it all. It kind of reminds me of the sense of humor in Evil Dead 2. The writing shows a lot of confidence in the concept, I think, with the dark elements feeling serious enough while still celebrating the awesomeness of finding a pet cat or a baseball bat.

The biggest area where Overlive is lacking is in its presentation. It feels like a very amateur production in a lot of ways. The city map is clearly pulled from a real satellite image, the backgrounds are few and rarely match the location they’re supposed to be found in, and the way the static images of the monsters move towards you in battle feels more like a shooting gallery than a house of horror. The UI is intuitive enough, but the game makes you sit through a lot of explanations and story every time you start over. The extreme replayability of the game makes that last point kind of annoying. Still, the game explains itself well and is pretty easy to play, and the star of the show is the text, so I can forgive the less-than-stellar production values. 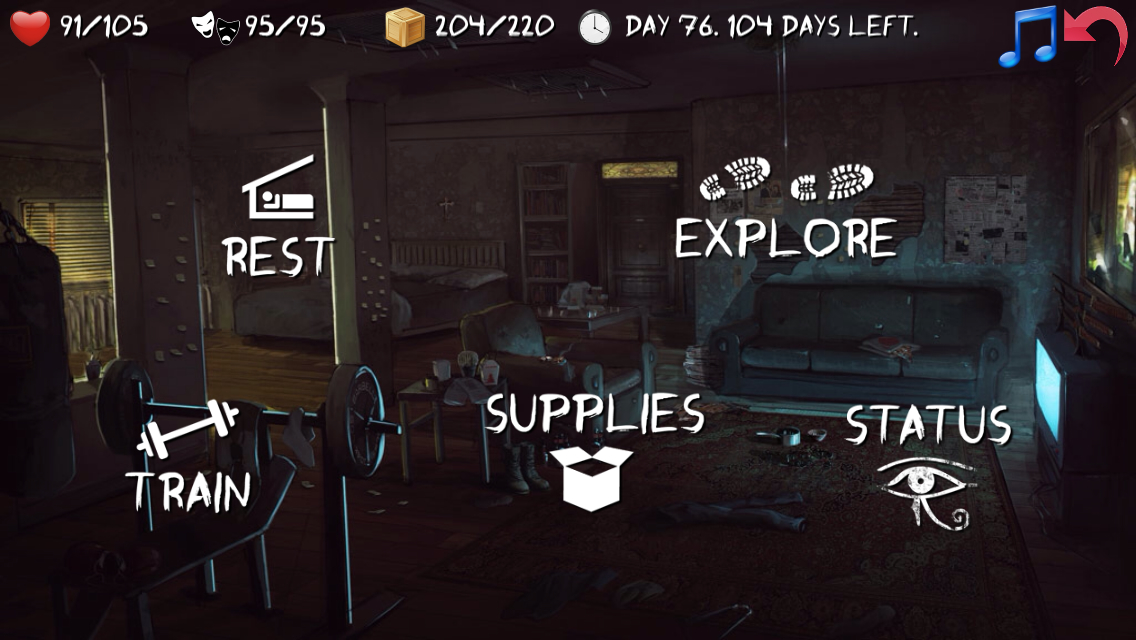 If you’re into adventure games or choose-your-own-adventure gamebooks, you’ll probably want to give this one a look. The theme is well-trodden but the tone of the writing manages to let some fresh air into the room, so to speak. Finding each of the endings is a good challenge that will keep even veterans of the genre busy for a while, and the frankly massive amount of events means even after finding all the endings, there will still probably be undiscovered nooks and crannies. If you’re completely tired of the zombie concept even past the point of enjoying it being sent up, Overlive probably won’t convince you, but I found it made for a nice chaser for more serious fare. Be sure to check out the thread in our forums, where you can read other impressions and maybe even get the developer’s attention.