Being an avid fan of oddball games, I’ve seen some pretty strange things in my time. I thought I had seen the strangest horse-related game to come out of Japan this year with Uma Musume, the upcoming idol-raising, horse-girl racing game from Granblue Fantasy publisher Cygames. I mean, surely that’s the ceiling, right? Combining Japan’s love of horse-racing, idol groups stacked with cute girls, and social RPGs is certainly one way to bring together seemingly disparate interests in a game. Then, someone showed me Usaya’s Uma no Prince-Sama (Free), and suddenly, I need a whole new scale for measuring weirdness. 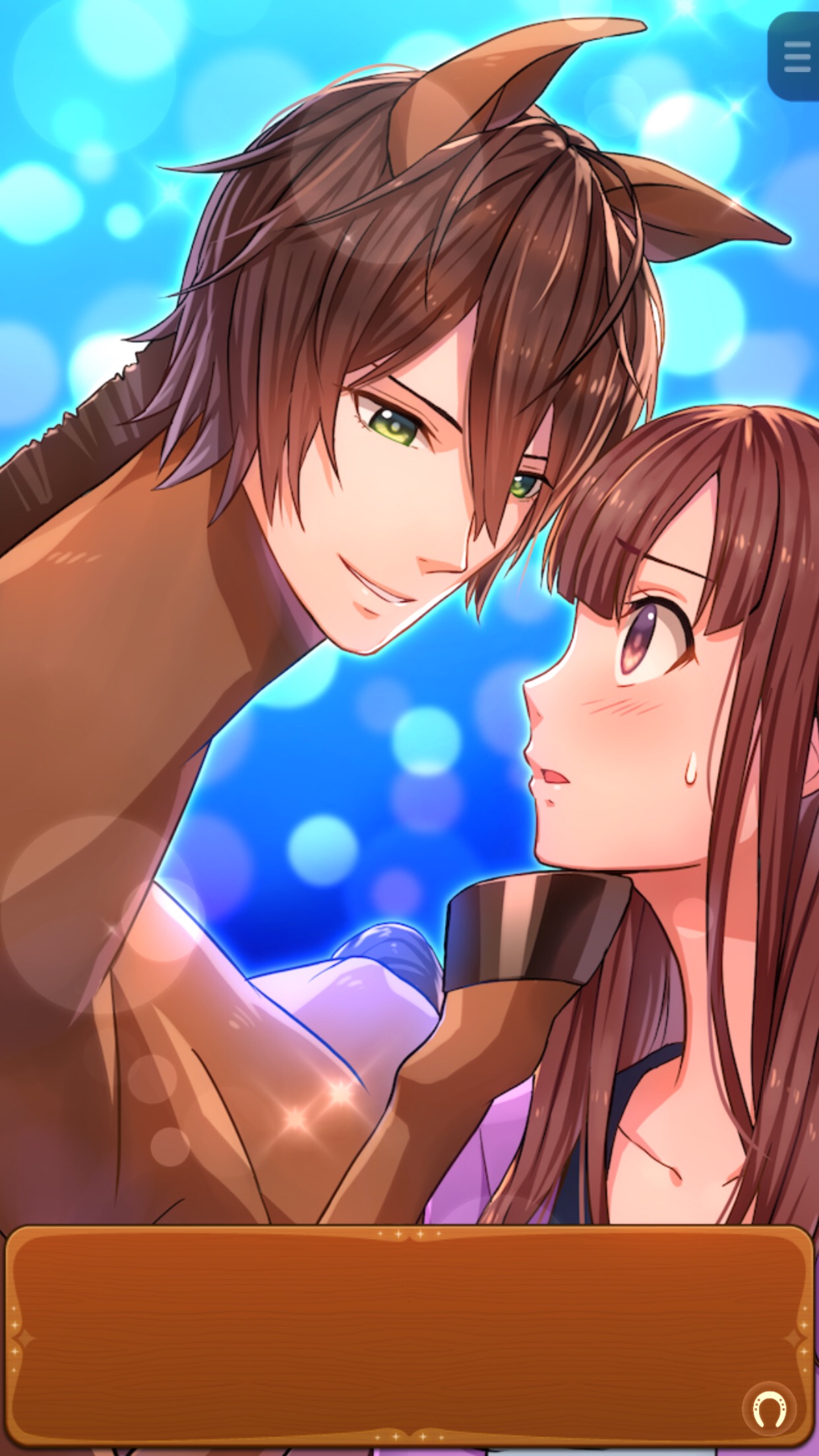 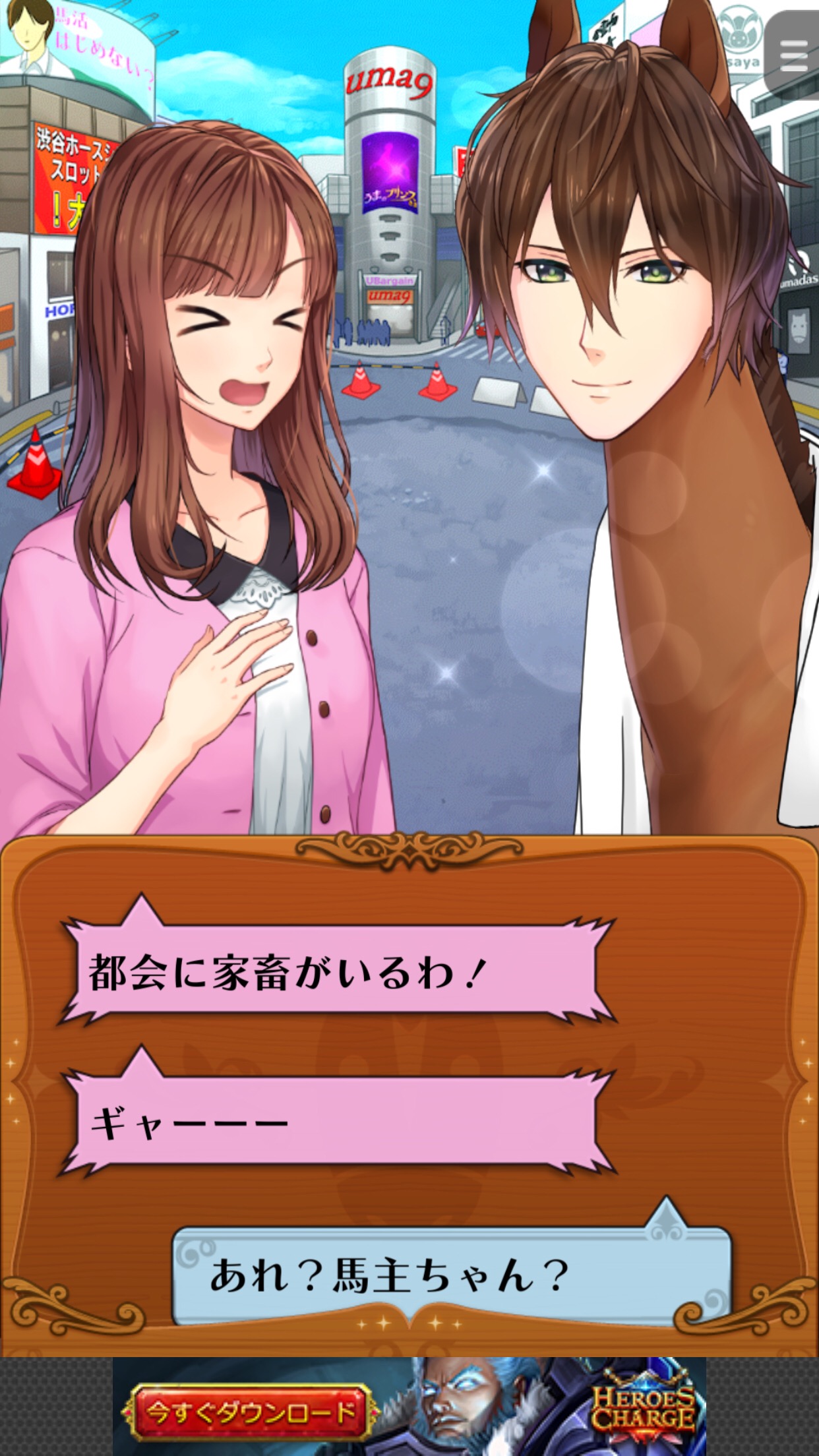 At least on paper, you can make some sense out of this game. There are a lot of women who play mobile games, and in Japan, one of the most popular genres for that demographic is the dating simulation. Attractive men compete for your main character’s affections, and you can choose which one you’d like to pursue. While horse-racing is more popular with older men, horses themselves are as popular with Japanese women as they are with anyone else. So why not try to marry these concepts somehow? Maybe a dating sim that takes place on a farm, where your heroine has to choose among several handsome farmhands? Or perhaps a riding club, where the men battle each other in competitions, seeking to win your approval? Or maybe you 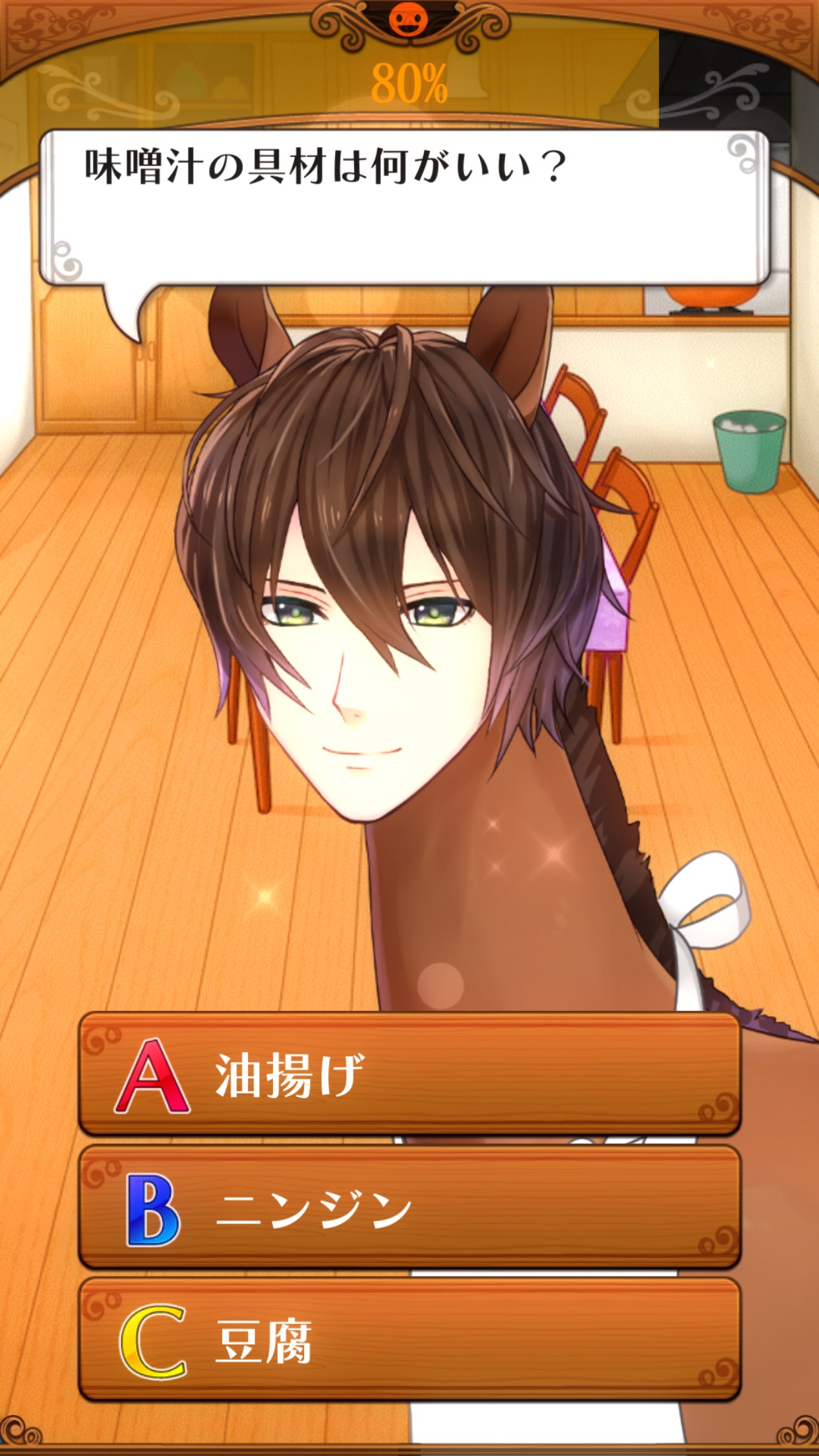 could just stick a handsome man’s head on a horse’s body, checking off all the genre cliches whether they make sense or not.

So, yeah. Uma no Prince-Sama goes for the latter choice. It’s absolutely bizarre. Your character is a normal human girl, and it’s not like the absurdity of the situation escapes her. And yet, there’s something compelling about this ikemen (handsome man) horse and his romantic gestures. Friends, you haven’t lived until you’ve seen a horse with a sexy dude’s head doing kabe-don (placing one’s hand, er, hoof, on the wall beside the heroine’s head) or gently lifting the heroine’s chin with his hoof so he can peer into her eyes. These scenes are your rewards for reaching certain milestones in the game.

As for the game itself, it’s sort of a tapper. Each chapter has a certain task that the Horse Prince will perform when you tap on an object. First, you’ll be feeding him carrots. Then, you’ll have him working out on treadmills, chopping radishes, and so on. Each action earns some points towards filling a meter at the top of the screen. When it fills up, you get a hilarious cut-scene and move on to the next chapter. You also have to pay attention to the Horse Prince’s stamina. As he performs actions, he becomes tired, giving a worse return the weaker he gets. You can pep him up by answering some multiple choice questions in a favorable way, or really get him going by using a golden carrot. The latter is usually only available as a paid item, while the former can only be done three times before you have to wait a half-hour for a timer to reset. 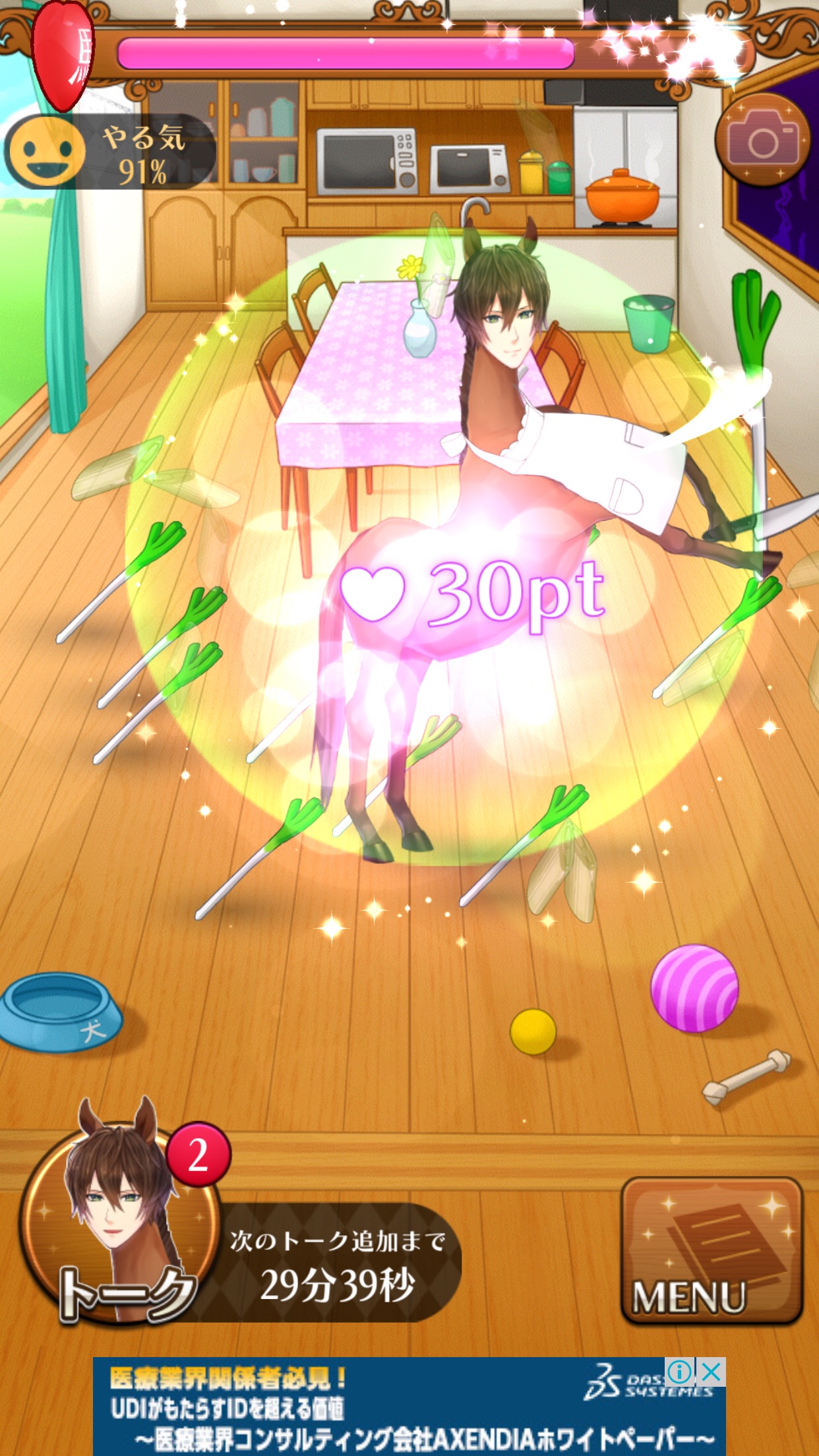 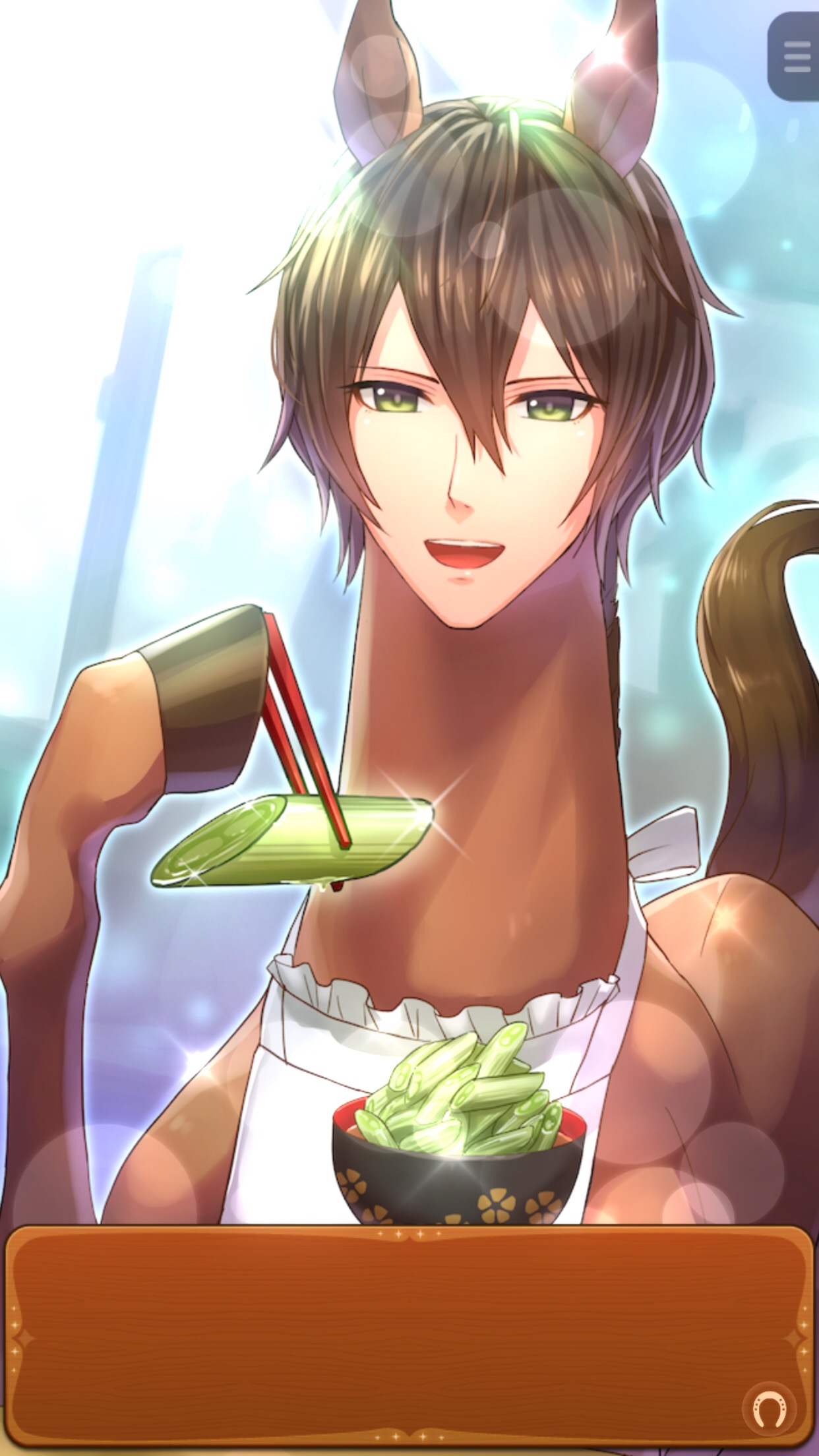 Not much of a game, to be sure, and it’s entirely in Japanese to boot. But it’s easy enough to play even if you can’t understand the language, and the visual gags work whether you can read the story or not. As a silly distraction, Uma no Prince-Sama is worth playing for a little while just to see the off-the-wall situations our heroine finds herself in with this hunky horse. If nothing else, I can’t imagine any other game will take this game’s crown as 2016’s strangest horse-related game.