Back when I reviewed developer AJTilley’s first visual novel release on iOS, Sword of Asumi ($3.99), I found myself underwhelmed by the weak follow-through on what I felt was a fairly good premise, but had some hope for future releases from the team. Well, we now have a another game from AJTilley, and I have to say that I’m a lot less optimistic about their future work. Divine Slice of Life ($4.99), like the developer’s previous effort, has a good enough premise. You play as the reincarnation of Zeus who had been living a normal student life until two demigoddesses came crashing in, demanding you marry one of them and ascend to the Pantheon. Silly? Sure, but romantic comedies often are. Unfortunately, just as in Sword of Asumi, a decent premise ends up being entirely squandered. Somehow, it’s even worse this time around.

The main problem, among many, is that this visual novel game bites off far more than it can chew. There are five potential romance paths here, but the game is so short and limited in scope that none of them feel properly fleshed out. Each woman gets a couple of semi-romantic encounters with your hapless protagonist before he confesses his feelings and decides he wants to be with them forever. After that, you get an extremely brief ending followed by a credit roll. Of the five, you’ll end up spending the most time with the two demi-goddeses, descendants of Aphrodite and Athena. In spite of that, their paths feel the most hollow. Lots of sex, but almost no intimacy. 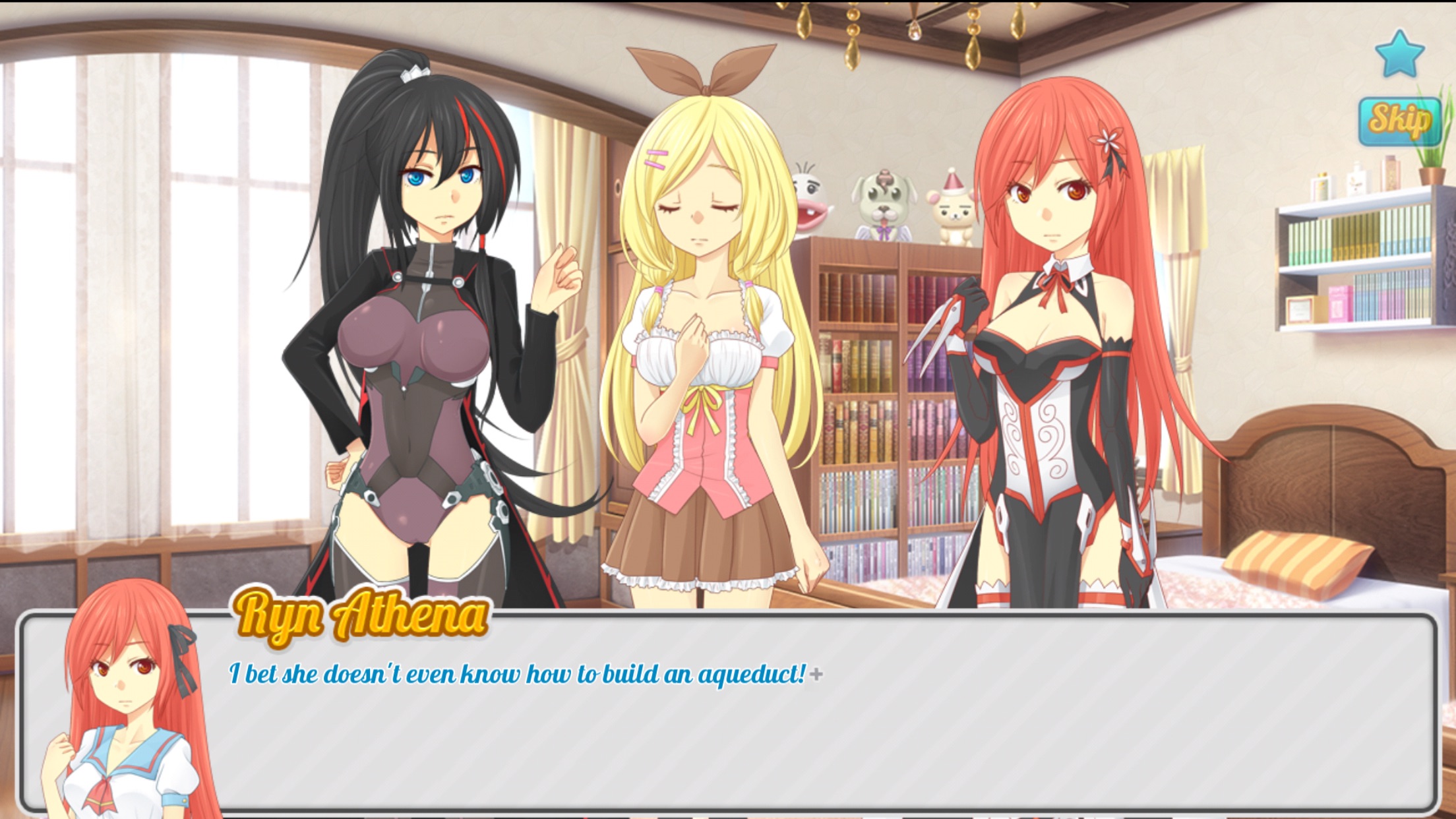 Then there are the mortals. Your childhood friend is one option, of course, but the bond is as artificial as they come. You only know that the two characters are close to each other because they say it every time they meet. Even with that issue, this is probably the closest any route comes to being satisfying. The other obvious option is the sweet, innocent blonde girl that your character has a crush on at the beginning of the game. She’s the only one you’ll have to fight for, as a rival for her affections appears right at the start of the game. Yet, winning her heart is as simple as asking for it, when it comes down to it. She doesn’t have much depth to her personality at all, beyond the fact that she has an unspoken affection for your character. Convenient, that. Finally, there’s a mischievous ninja girl whose route you might fall over backwards into. That route comes complete with a totally out-of-nowhere twist that doesn’t even merit a mention anywhere else in the game save one secret ending.

Divine Slice of Life is a port of a PC game that was released in both an uncensored 18+ version and a cleaned up Steam release. Naturally, this iOS version is the sanitized one, but it’s still quite risque in places even if it never shows off more than a brief flash of a nipple in a single scene. As in Sword of Asumi, many of the characters like to chill out in their underpants during scenes. Those underpants are hugging a bit tight in a lot of the art, so this probably isn’t a game you’ll be wanting to play in public places. There are also sex scenes along every route, but since this is the teen-rated release, that ends up amounting to some mildly lewd poses accompanied by the least sexy narration this side of an Ian Fleming James Bond novel. Heck, at least in those you get a good description of breakfast. 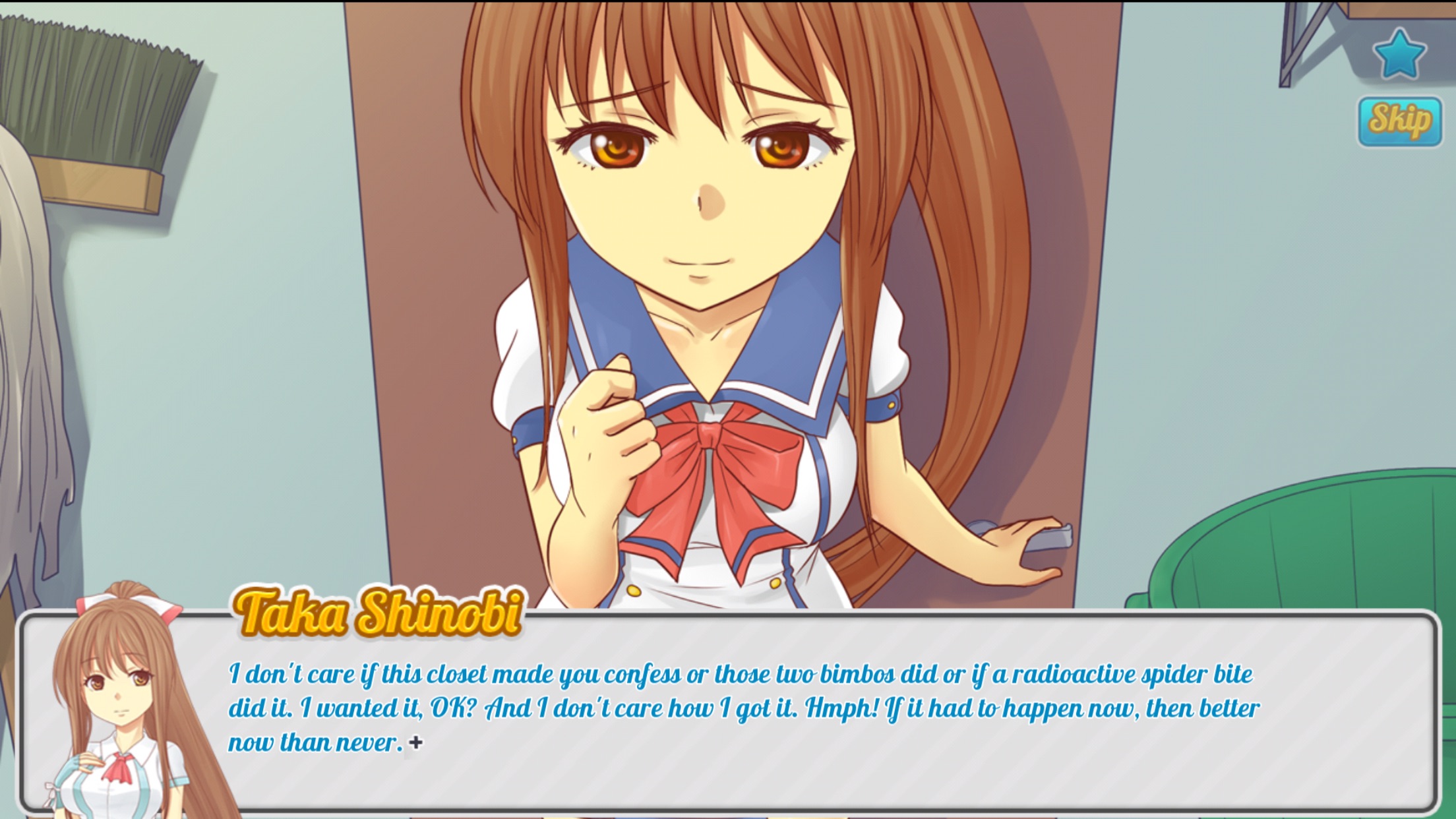 The writing is terrible from top to bottom in Divine Slice of Life. That might sound harsh, but it’s true. From a technical standpoint, it’s riddled with awkward phrasing, typographical errors, and poor grammar. The characters are paper-thin tropes that still can’t manage to hold together as cohesive entities. Everyone speaks in essentially the same voice, to the point that the two demigoddesses will simply swap lines in certain routes. The plot has a terrible flow to it, and the resolutions to the conflicts it raises come too quickly and conveniently. There are a couple of flashes of inspiration where you might hope things are going to pick up, but that’s all you end up getting. Even if all the basic English errors were addressed, the writing in this game would still be dreadful, however. Everything from the way situations are described to the way characters speak feels like an average junior high school student whipped this up for a creative writing class.

That’s not the end of the bad news, either. First of all, the game uses a terrible font. It’s a semi-cursive style that wouldn’t be pleasant to read on a computer monitor, but is absolutely awful on a mobile device. To top things off, this game contains some of the genuinely worst voice acting I’ve ever heard in a video game. A couple of the characters are okay, but at least half of the cast sounds completely disinterested in what they’re reading. Lines that are meant to be emotional are delivered in a flat tone. Improper emphasis steps all over attempts at jokes. Characters who are trying to be seductive end up sounding like they’re scanning your groceries at a supermarket check-out. Even the sound mixing is off, so certain characters are nearly inaudible while others speak loudly. You can adjust the levels for the music, voices, and sound effects, but since the character volumes vary, you’re left to choose between half the cast being too quiet or the other half being too loud. 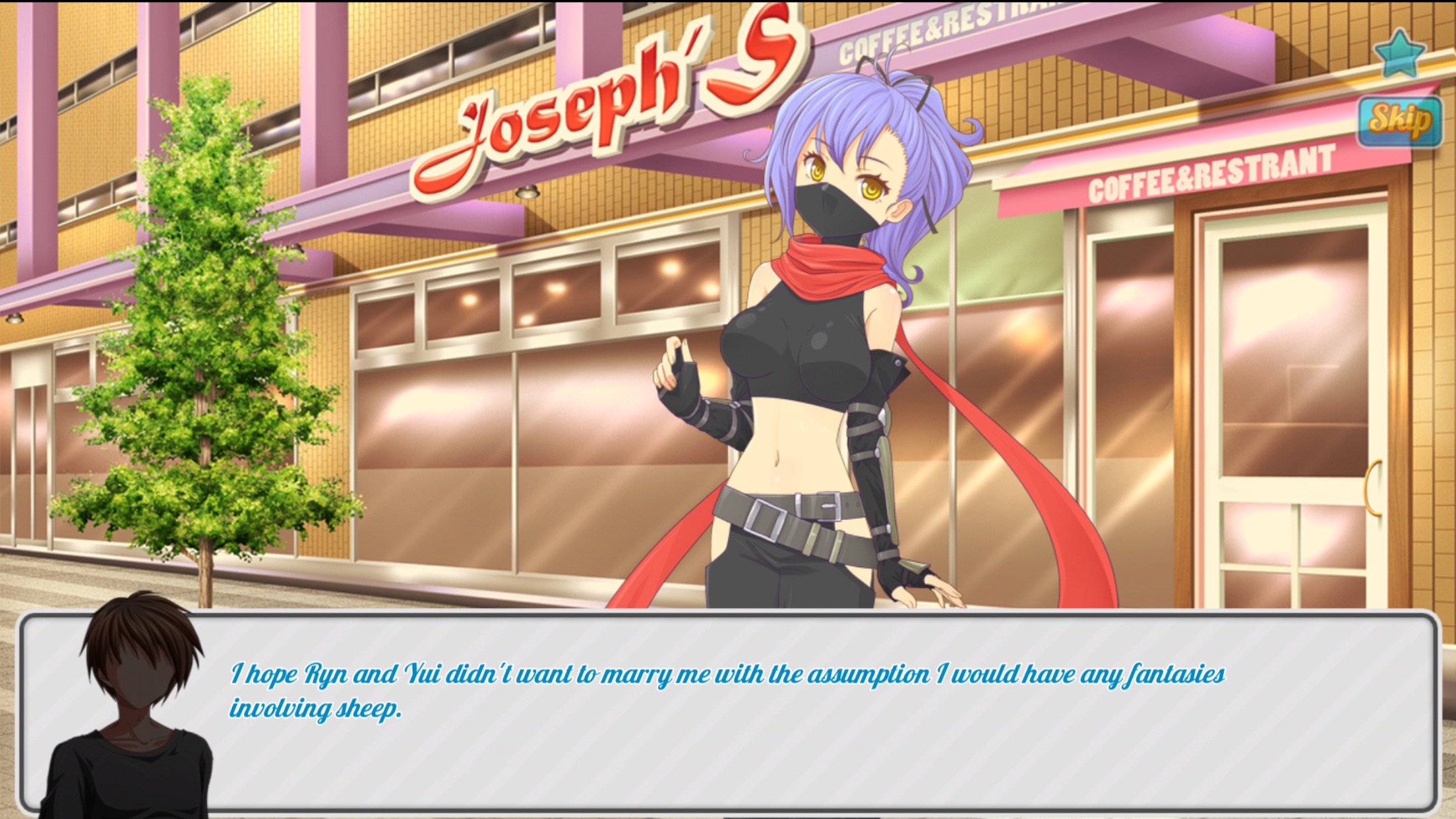 The only nice things I can say about Divine Slice of Life are that it has an amusing premise, and some of the art is good. Everything else, including the writing, the plot, the characters, the pacing, the voice acting, the interactive choices, even the text font, is straight-up lousy. It isn’t even satisfying as a joke purchase. If you want a good visual novel, buy Steins;Gate ($23.99). If that’s too pricey, buy Fragment’s Note ($3.99). Go for An Octave Higher ($6.99), perhaps. Those are all games I would recommend a hundred times over the poorly cobbled-together mess that is Divine Slice of Life.