Of all the stories I expected to experience this week, a cross between a dating simulation and 21 Jump Street was not especially high on the list, but here we are. Sword Of Asumi ($3.99) is a visual novel with mild dating sim elements that casts you as an undercover assassin trying to root out the source of a terrorist threat at a school. You’ll have to pose as a schoolgirl for however long it takes to find the culprit, with your superior keeping an eye on you as one of the teaching staff. I’ll be honest: I think that’s an absolutely brilliant premise for a game like this. It’s a good central plot to build a story around, providing reasons to mingle with as many people as possible in a variety of locations. There are potentially great conflicts if you happen to get close to someone who is involved in the nefarious plot. There’s a reason this all worked so well for Fox in the late 1980s. 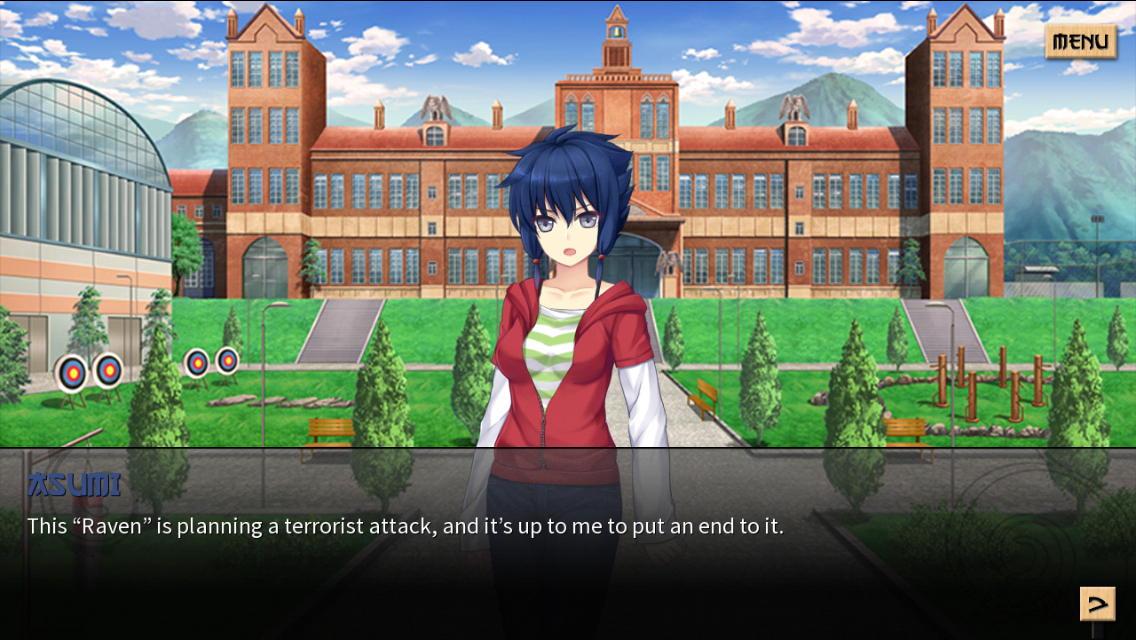 As near as I can tell, Sword Of Asumi is the first visual novel game from developer AJTilley.com. The game was first released on home computers early this year, where it appears to have not made much of a splash. Like most visual novels, it makes the transition to iOS quite well since the game more or less consists of tapping to advance text and making the occasional choice. There are several endings to the game, and which one you see depends on the choices you make along the way. By following certain paths, you’ll see special artwork that will be added to a gallery in the game’s extras menu for viewing at your leisure. Yes, this is a visual novel, alright.

Sword Of Asumi mostly colors within the lines for the genre, really only standing out in a couple of ways. First of all, there are an incredible number of choices compared to the norm in this genre. I’m not sure how many of them are of any real consequence, but the game does ask your input frequently, and I like that. Secondly, it’s really short. I started it at breakfast and had most of the gallery filled out by lunch. Whether that’s a good thing or not will vary from person to person, but I can at least appreciate the brisk pace it moved at as a result. On top of the promising set-up, I also really like the setting. It supposes a Japan where the Emperor was unable to topple the Shogun, leaving the country in an isolated, yet modern state where the samurai still rule the roost. Alternate presents are a good way to catch my attention. 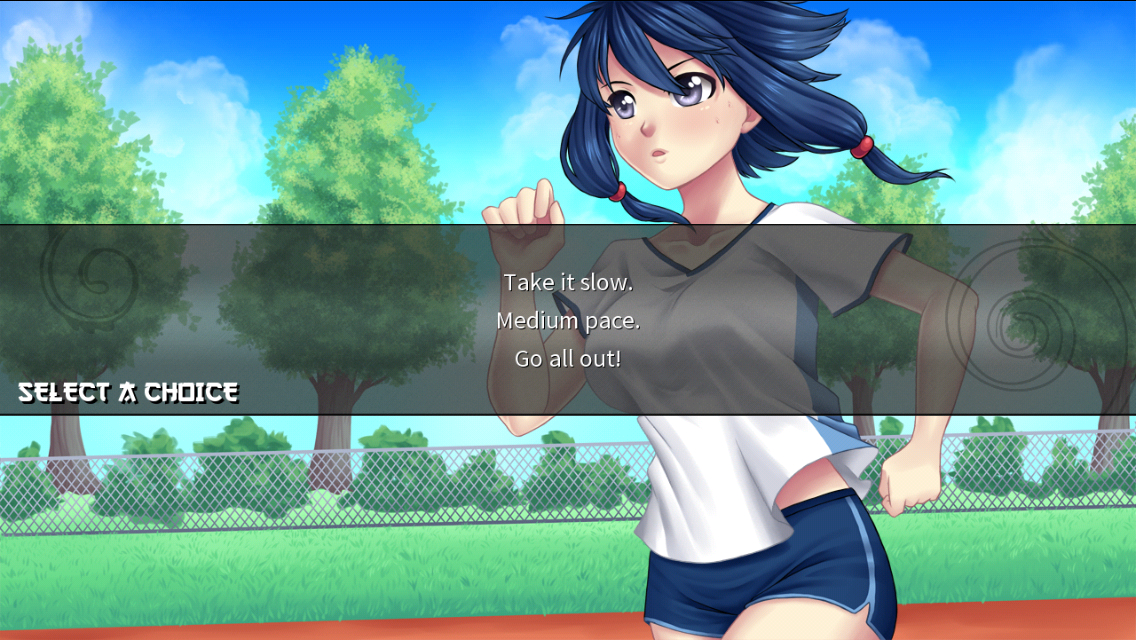 Unfortunately, perhaps as a result of its status as a rookie effort, Sword squanders its premise big-time. It seems like it’s never clear on whether it wants to be a dating sim with mystery elements or a mystery story with light romance. In their struggle for the reins of the story, these two sides of the game end up clashing terribly. The ultimate point of the game is to discover the identity of the mysterious terrorist Raven, but the game frequently slaps you on the wrist if you actually try to go about that in a sane way. It wants you to mingle and participate in goofy events that serve more as an excuse to put the nubile heroine in skimpy outfits than anything else. Yet, in the climax of the plot, the mystery story part essentially overrides almost everything you’ve done socially. There’s very little payoff for the relationships, especially if you happen to have built towards someone involved with the terrorists. That should be prime drama fuel, but it just kind of abruptly ends.

While we’re on the topic of the ending, I want to bring up one of my biggest gripes with the game. If you’re telling a whodunit story, you shouldn’t cheat the reader. That goes the same for a whodunit game. Sword Of Asumi drops an obvious red herring, but I would imagine most people will see through that person to the real mastermind. In the end, you have to choose the person you’re going to go accuse. If you pursue the real suspect, you’ll get a bad ending. Instead, you have to go after the red herring, which somehow leads to you going after the real culprit. It kind of makes sense after the fact, but only after the fact. I had saved the game before making my choice, so I didn’t lose much in terms of time, but it left me with a raw feeling as the credits rolled. 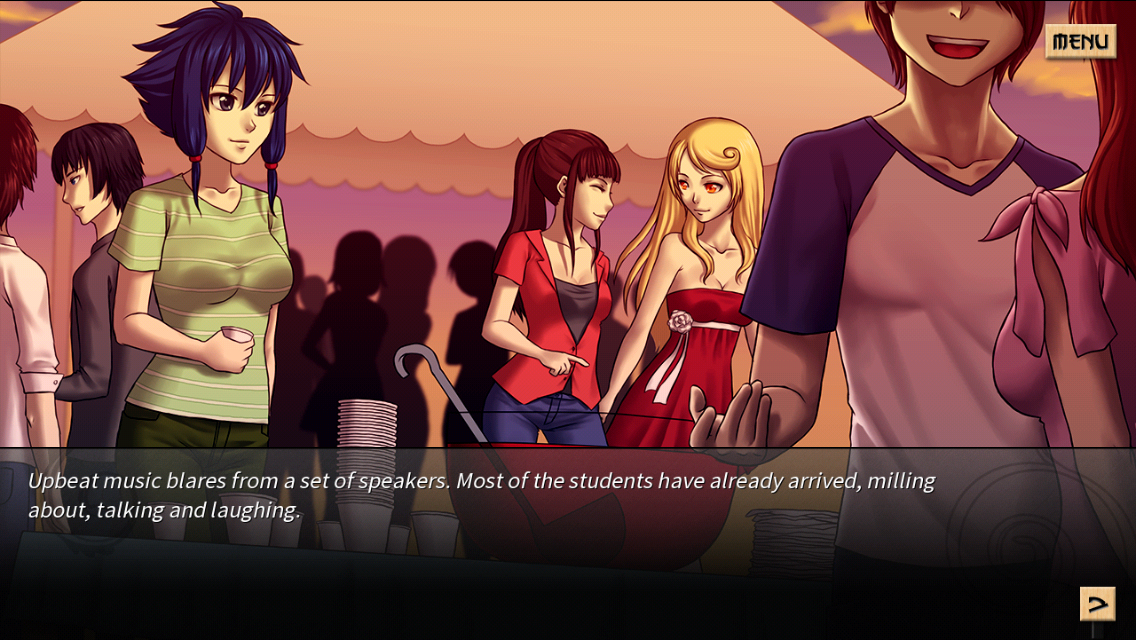 I also found the cheesecake to be a bit too much at times. Now, I know, this is a visual novel, so cheese and/or beefcake comes with the territory. I don’t mind that. But Sword Of Asumi is distractingly focused on getting the main character into sexy outfits at every turn, often at the expense of telling its story coherently. Asumi puts on a different set of sexy lingerie every night, and almost every in-game day has her changing her outfit at least a couple of times, often using the same artwork of her standing in front of her mirror with some new clothes glued on. I think I’d actually enjoy it more if the game fully owned it the way it does in the scene where two of the characters are dressed up like catgirl servants, but that ends up being the sole goofy acknowledgement of Asumi’s penchant for playing dress-up. Have more fun with it, you know? If you’re going to have the shy teenage assassin wear a lacy garter belt to bed, at least wink at the camera or something.

It feels like there are so many ways Sword Of Asumi could have done better with its ideas. The story could use trimming in some places and expanding in others to help it reach its full potential. The actual in-game text desperately needs editing, as it’s currently absolutely littered with spelling and grammar mistakes. The dialogue could do with some punching up to make things sound less banal or awkward. As mentioned above, that whole ending sequence is really poorly-conceived, too. Also, while I understand why the art was done in this way, it’s a bit too obvious that the game is using what amount to paper dolls with clothes, features, and chest sizes swapped around. Even the unlockable special pieces of art are recycled a bit too often given how few of them there are. In visual novels, the galleries are vital for promoting replays, but if my reward is just going to be the same piece of art with one new detail cut and pasted in, it’s difficult to get excited. 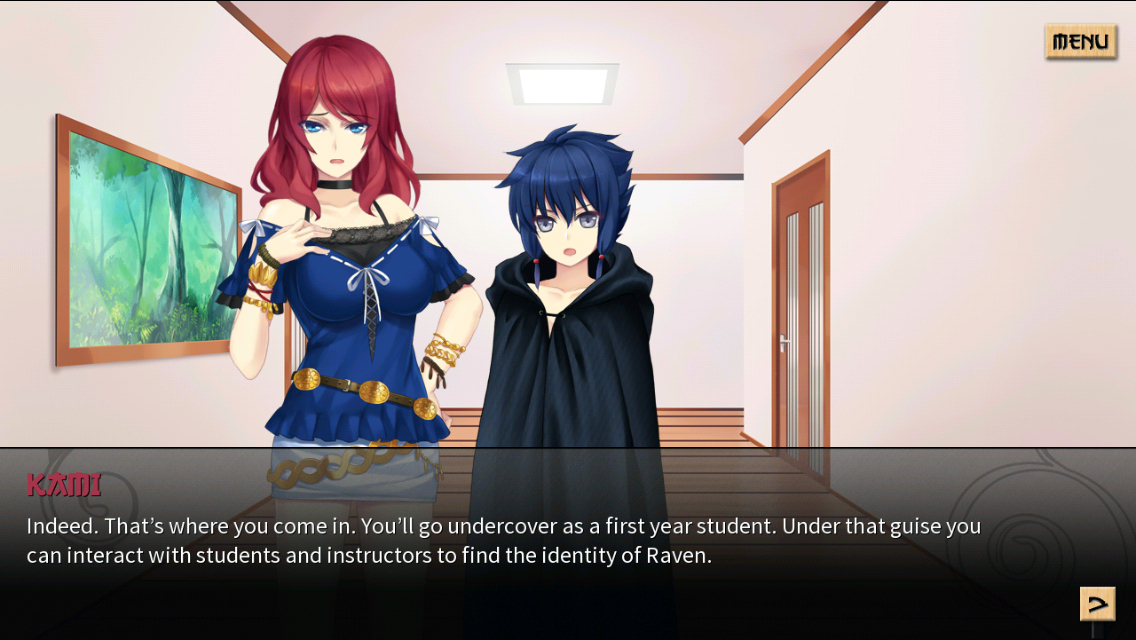 If it seems like I’m being hard on Sword Of Asumi, it’s only because I was really in love with its clever premise and enjoyable opening sections. I enjoy the brisk pace of its story and the number of choices I get to make. I’m not so big on how scatter-brained the storytelling is, the generally sloppy writing, and the irritating resolution to the story. It’s a mixed bag, the best parts are front-loaded, and it’s relatively light on content, so I can really only recommend this one to particularly hungry fans of the genre. Still, as a first effort, it’s not that bad, and I’ll be interested to see how this developer’s future efforts turn out.