Hello, gentle readers, and welcome to the RPG Reload, the weekly feature where we chomp burgers and stomp zombunnies. Each week, we take a look at an RPG from the App Store’s past to see how it hold up in the modern day. It’s a chance to revisit old favorites, reflect on their overall place in the iOS library, or simply to take a deeper dive than our reviews typically allow. Since my whole village was just burnt to the ground, I suppose I’m the hero of this piece, and that means I’m in charge of the schedule. While I do my best to present a balanced plate, if you think I’m missing something important, please let me know. You can comment below, post in the Official RPG Reload Club thread in our forums, or tweet me at @RPGReload. Since the schedule is planned well in advance, you might not see your suggestion soon, but it will go on the master list. 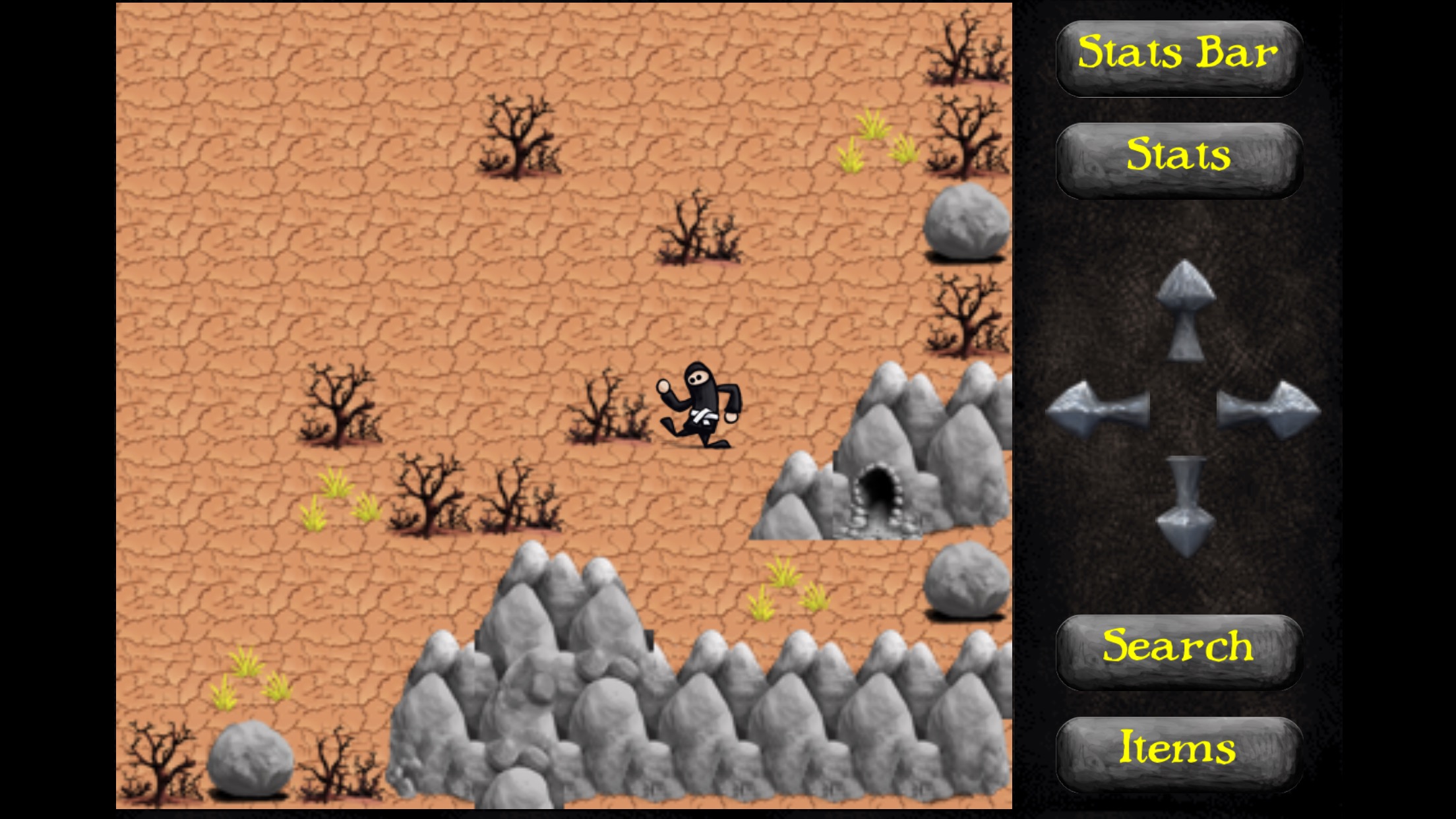 With new hardware and major OS updates every year, I sometimes feel like it’s a miracle when I fire up a game from the early years of iOS and find it still in good working condition. It also makes me a little worried about how Apple’s new policies on keeping apps maintained is going to work out. Yipe 5: Attack of Idle Hands ($0.99) first released on the platform on December 5th, 2009. Its most recent, and presumably final, update was on March 10th, 2011. For all intents and purposes, this game has been abandoned, though I suppose the fact that the developer keeps renewing his license with Apple is somewhat encouraging. Hopefully, whatever Apple’s planning won’t affect games like this one, as Yipe 5 is both totally functional and still pretty fun in a rudimentary way.

As you can probably guess from the title, Yipe 5 is not the first game in the series. It’s also not the fifth, either. Although it is to date the only appearance of Yipe on iOS, Yipe 5 is the fourth installment of a series that stretches all the way back to the mid-1990s. Created by then-student Kevin Kinell, The Quest of Yipe was one of those under-radar computer games that found its way onto many passed-around floppies. While the series is almost absurdly simple in its mechanics, there’s a certain compelling quality to it. Perhaps more importantly, the series has always been infused with an enjoyable sense of humor. It’s hard not to crack a smile at some of the things written into the games. 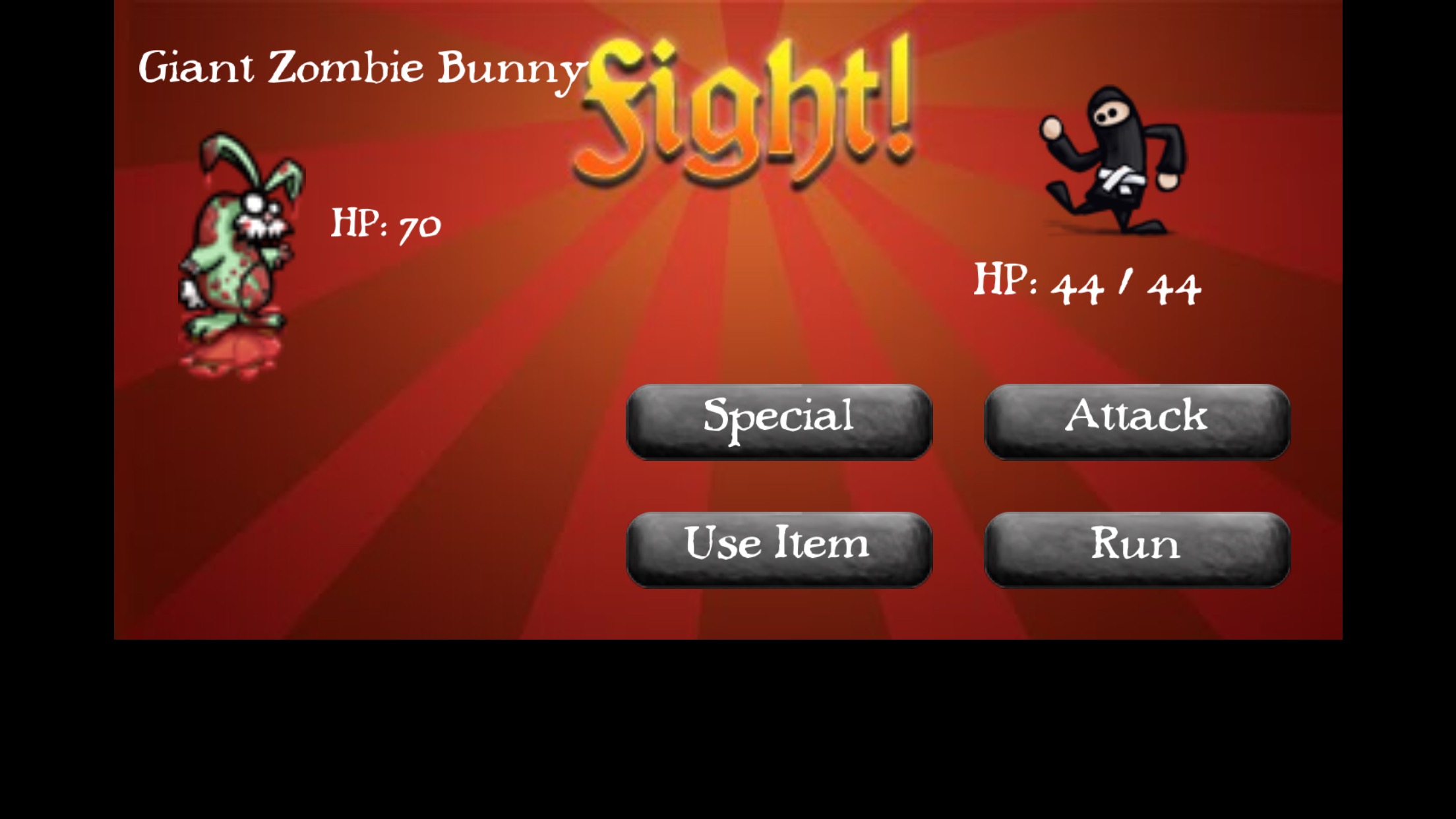 It was also interesting to watch the progression of the series from installment to installment. The look of the first game is simple and extremely amateurish and in the end, there really wasn’t a whole lot to do in the game. Each new release expanded the size of the world, filled in more content, and improved the overall look and feel. Yipe 5 is easily the best looking and playing of the lot, which I suppose can be partly attributed to Kinell having more help than usual. It’s still a bit of a bare-bones game in a lot of ways, but I think there’s definitely a place for those kinds of experiences on the platform. On computers, the Yipe games were great when you wanted something to zone out on Solitaire-style without having to think too hard or take notes. That casual quality shines just as brightly on mobile.

When you start Yipe 5, you can pick one of three different character builds, your main character’s sprite, and your desired difficulty level. You’ll then be dumped out at the castle, where the king will give you your first quest. The kingdom has been having zombie problems recently, and the king wants you to find out what is causing all of the fuss. He gives you some money, tells you to head northwest, and that’s about all you get. As usual for an RPG, you’re not very strong at the beginning. You’ll need to level up. You’ll need to do it a lot. While many modern RPGs are balanced around minimizing grinding, Yipe is all about the grind. Grind for levels, grind for gold to buy new gear, throw yourself against the obstacles in front of you until you die, repeat. Dying incurs a minor cash penalty, but there’s little beyond that to keep you from headbutting adversity until it gives up and goes home. 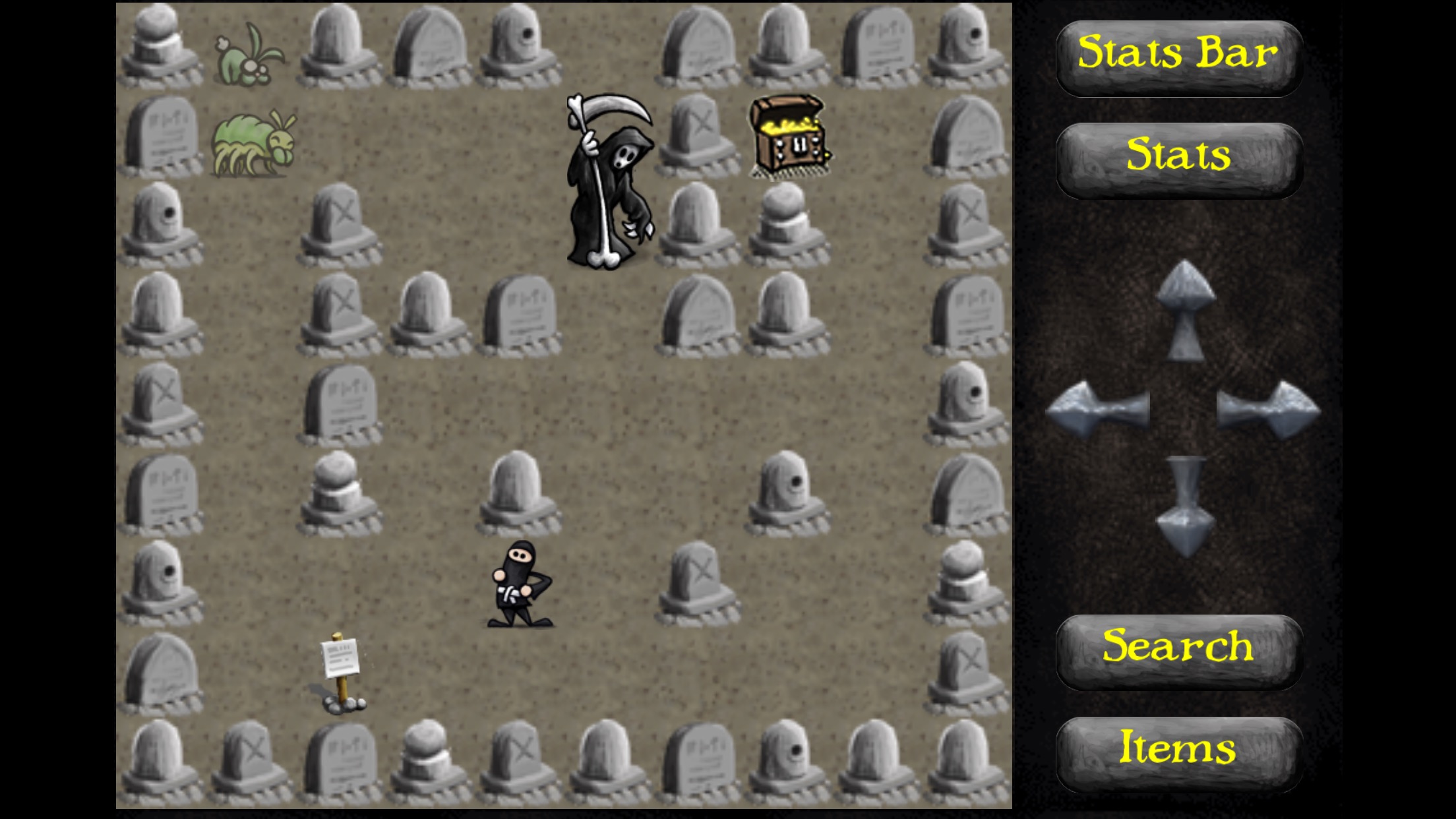 You can grind in most RPGs, though. In Yipe, you pretty much have to. While you have a special attack you can launch every so often, there aren’t any real tactics involved in the battles. Do you have enough hit points to outlast the enemy? If so, you’ll win. If not, you’d best have some healing items with you, or you’ll be whisked back to the underworld. Luck plays a role in determining who hits and whether or not it’s a critical strike, but you’re still just hitting each other until one of you falls over dead. The first quest does a good job of letting you know what you’re in for, as you’ll likely die a handful of times to the zombie boss before gathering up enough gear and experience to prevail. After that, you can return to the castle, collect your reward, and take on your next quest.

The game includes just six such quests, so if you could go from one point directly to the next, it wouldn’t be very long at all. Even with the required grinding packed in, it’s a fairly brief experience. It’s probably for the best, though, because while it’s fun enough to explore, collect loot, and bash increasingly tough baddies, the limited range of tactical choices can make Yipe feel fairly dull from a mechanical point of view. The longer it goes on, the more that feeling sets in. At times, it comes off like a slightly more complicated clicker than a proper RPG, which is interesting coming from a game of this particular vintage. 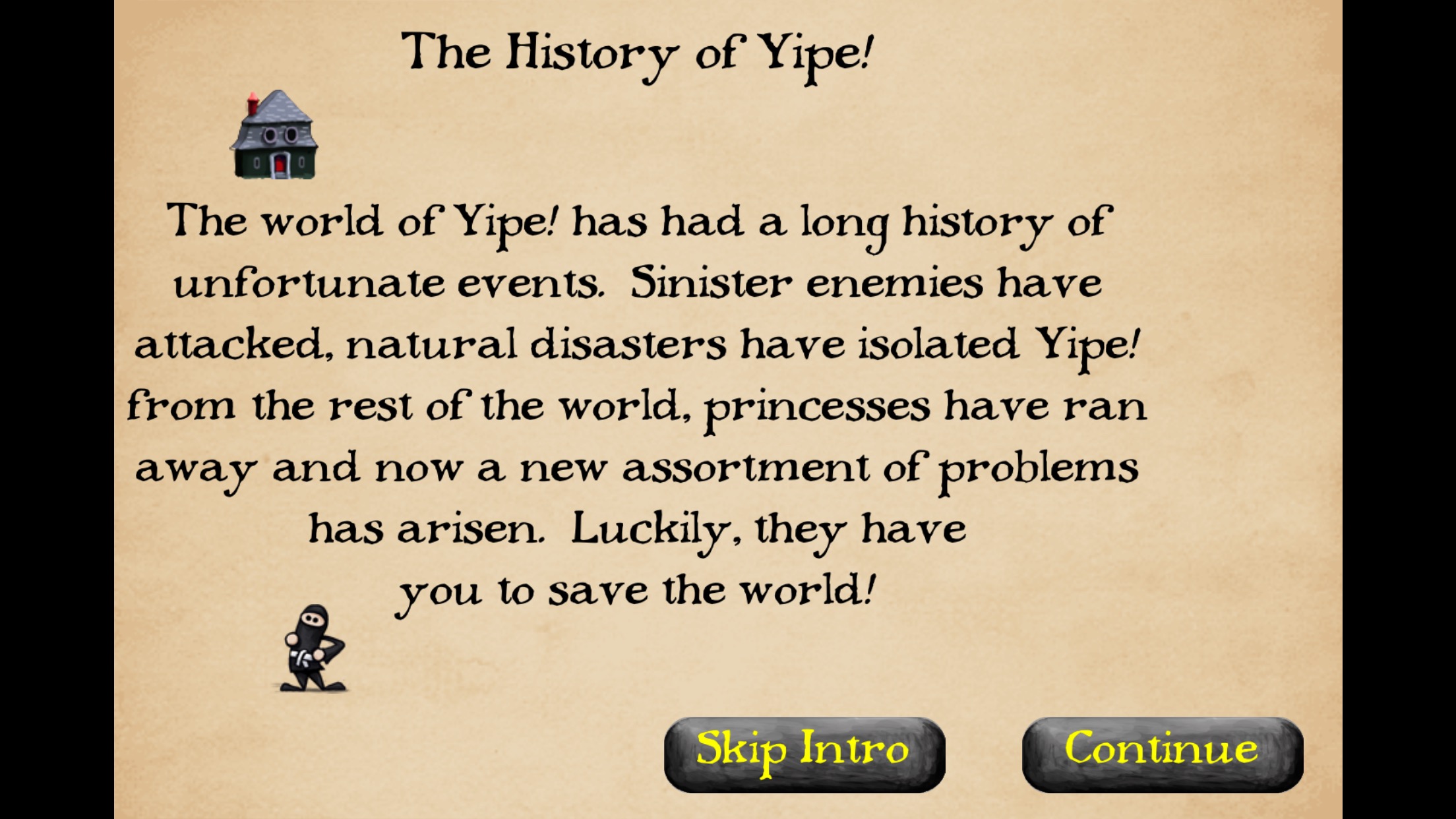 While the gameplay gets a bit stale over the course of the adventure, the humor luckily does not. Yipe doesn’t go for obvious comedy, but it certainly has its tongue in its cheek right from the outset. Item descriptions can be pretty funny, and the monsters aren’t the usual sort by any means. The king is a complete buffoon, and everyone in the kingdom seems to realize it. The best lines are found by making liberal use of the game’s search command, however. Using it just about anywhere will produce some silly line or another, and in specific places, you can even search multiple times to get funnier results. I think it’s the desire to read those lines that drives me forward in Yipe 5 more than anything else.

Is that enough? Well, I think it is. For the first playthrough, anyway. Even with it being as easy as it is to jump into Yipe 5 for a few minutes of monster-mashing, I can’t say I was terribly excited with the idea of going through the meat-grinder again. I’ve seen all the jokes by now, and although seeing many of them again still brings a smile to my face, Yipe 5 is a game that is probably best played just once. There’s not enough here to merit a second playthrough, and the act of playing the game involves so much monotonous busy work that it’s hard to get into a replay. To its credit, Yipe 5 moves at a relatively zippy pace, and there are plenty of good grinding spots, so it’s not as rough as it could be. If nothing else, I at least appreciate that a game from this era is still working so well without having been updated in a half-decade. Sure, there’s no retina support or anything like that, but the style it was made in holds up fairly well. 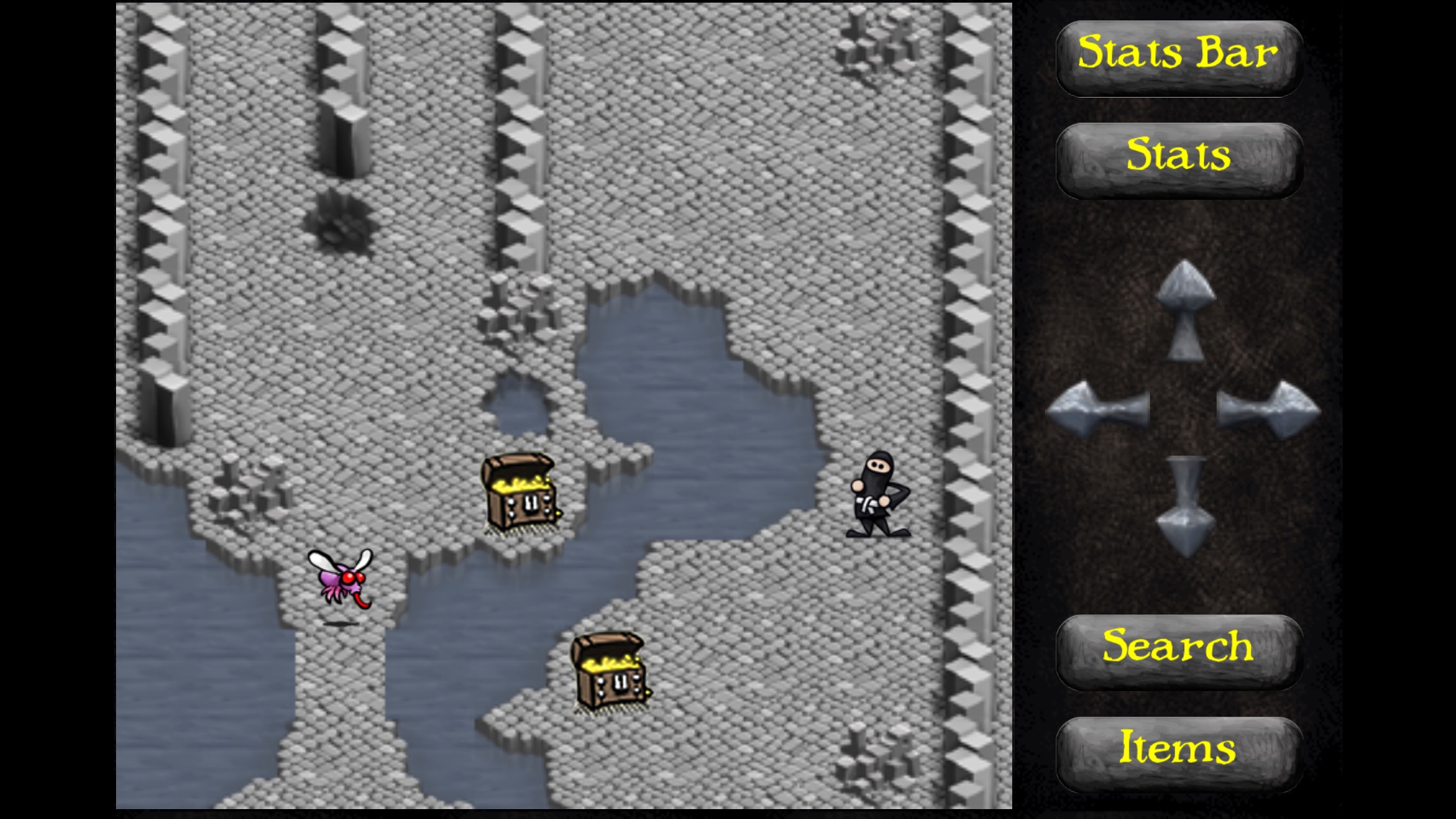 That’s just my take on Yipe 5, though. What do you all think? Do we have any old-school fans of the series in the house? You can let me know by posting in the comments below, stopping by the Official RPG Reload Club thread in the forums, or by tweeting me at @RPGReload. As for me, I’ll be back next week with the first in our new series of interviews. Thanks for reading!