Solitaire is quite possibly the most popular video game of all time, thanks to the game’s inclusion in Windows in particular. Many a bored office worker, student, and grandparent has sunk hours into this classic card game. Now, with games like Card Crawl (Free) bringing modern roguelike influence into card games, it seems only fitting that Solitairica ($3.99) should come into existence, bringing something more closely resembling actual solitaire to the solitaire roguelike subgenre. And it promises to steal countless hours of your time, even if you’re not necessarily a card game player. 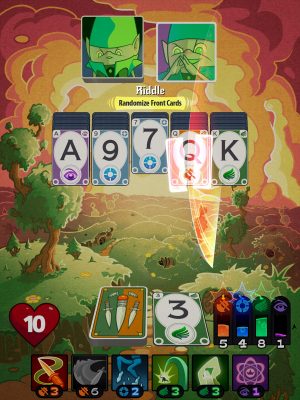 The core of Solitairica is similar to solitaire, but not identical. You get rid of cards by playing a card on a lower or higher number, but you’re notacking cards and then getting rid of them in stacks based on suit. Instead, playing a card then picks up the card you played it on, which you can then use to play with other cards, also picking up elemental energy along the way. Ideally, you want chains of card plays that go as long as possible, not just because you get coin bonuses for extended streaks, but also because you want to minimize the number of moves your enemy makes. The card rules are simple enough, with the ultimate goal being to clear the board before they defeat you. And the enemy will do damage to you with various abilities, but also try to make the board a bit more difficult to deal with.

You earn coins as you play, and these can be spent on new items and spells for your run. Yes, just your current run, as this is a roguelike, but not a strict one at all, as there are permanent upgrades. At the conclusion of each run, you’ll get a hard currency (not something you can buy) that can be spent on unlocking new classes, and upgrading each class’ inventory slots and decks, such as making aces give you a bonus whenever one is drawn. The hard currency can also be used to buy extra lives, but the catch is that you can’t spend real money to buy more, so you have to decide if it’s worth the trade-off of buying upgrades to have that lifeline if you fail. You can spend coins as well, but that means fewer upgrades, of course. And if you put off buying extra lives for too long, if you get some bad luck, well…too bad! 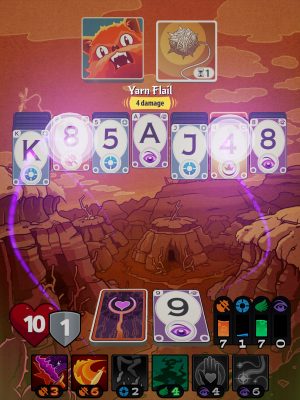 The thing that’s kind of fascinating about Solitairica is that unlike a lot of other card-based games, I’m pretty sure you could hand this to your solitaire-playing grandmother and she could get into it. Sure, the game has the combat and RPG elements to it that are important, and the usage of your coins as you advance is important. But at its heart, smart card play is the key to doing well. Luck and randomness will play a huge role, but you can try to diminish their factors through smart solitaire play. There’s enough resemblance to actual solitaire there that I think this game could have a wider audience than just fans of roguelike-inspired games if those potential players are exposed to it.

Solitairica‘s different enemies and classes help provide the variety that helps keep the game compelling. The road to victory involves 18 battles, with enemies getting more powerful over time, but each enemy brings new threats to the table. You have to adjust for how each enemy will come after you with your abilities, as having certain spells will help neutralize what they’re trying to do, or at least will keep you alive. The different classes do a much better job at making each run feel different than you might think – through some stat changes and different starting abilities, you really have to change how you approach the game each time. Solitairica manages to squeeze as much from its concept as it possibly can. 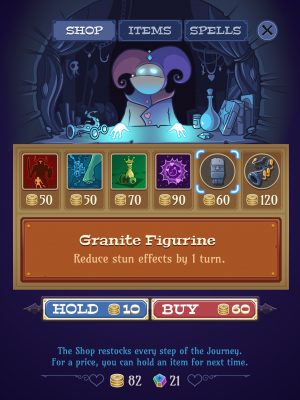 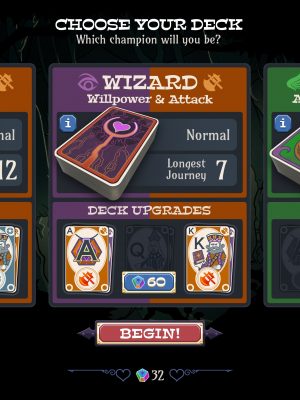 Solitairica offers very, very lengthy game sessions – making it through all 18 battles can take a couple hours, at least. The good news is that each individual level is generally pretty short (except for one later boss that spawns a lot of cards, and is more a test of endurance than anything else), and this is a game that actually handles lengthy sessions well. Namely, if you quit and the app gets closed out of memory, you can return to where you left off without issue. Too many games don’t handle sessions well on mobile, and Solitairica nails it. Good job, especially in a game where the intent is to sink in lots of time playing to reach the ultimate goal. And it is quite easy to play this for hours on end. Solitairica is so compelling because it’s a nice sit back and play experience, one where you can be patient and make moves and not stress about the next one. Part of it is the nature of the game to be so long-winded, but I’m willing to play this game for hours and hours on end with no worry. The drawback is that progress and unlocking items can take a long time, because good sessions are so long, multiple hours, so I’d consider progress secondary to just enjoying the game if you do check this one out.

The core issue with Solitairica is one that’s kind of endemic to solitaire as a whole. See, solitaire is kind of a broken game in that you can get a draw where you can’t win. Here in Solitairica, it’s quite possible that you can’t progress because the card draw is not in your favor, and the enemy winds up taking you out before you get a chance to clear the board. Which is kind of annoying, to say the least! The end of a round winds up being a bit boring as you’re just hoping that the correct card pops up, whether to make a play or to allow you to attack the card. This is an interesting problem that I have no idea of a possible solution for, it’s just kind of how the structure of this game will work.

I quite recommend Solitairica if you enjoy roguelikes, card games, and/or card game roguelike hybrids. I’m glad this game finally hit mobile, because it’s a perfect fit for the platform, and while the solitaire core may be a bit frustrating to deal with at times, the game is overall a very strong experience. And seriously, if you need an excuse to zone out for hours on end, Solitairica may just be the best game you can play right now to do that.