Hello, gentle readers, and welcome to the RPG Reload, the semi-weekly feature where we can’t quite remember how old that rat meat is. Each week, we take a look at an RPG from the App Store’s past to see how it’s doing in the here and now. It’s a chance to revisit some old favorites, reflect on their place in the overall library, or simply to take a deeper dive than our reviews typically allow. As the ringleader of this little circus, I try to choose a balanced selection of games from week to week. If you feel I’m missing something important, however, please let me know. You can do that by posting a comment below, dropping by the Official RPG Reload Club thread, or by tweeting me at @RPGReload. Since I plan the schedule pretty far in advance, it might be a while before you see your suggestion, but it will be added to the master list. 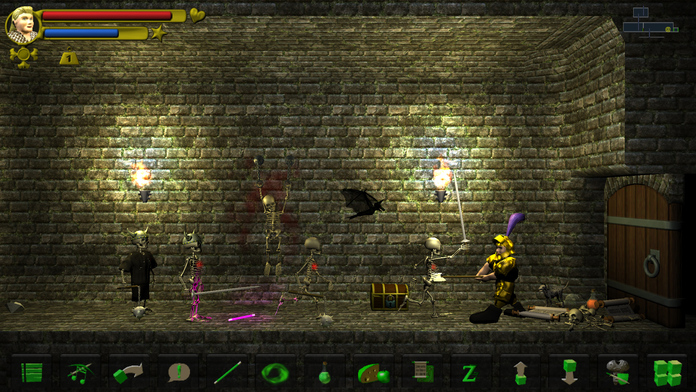 During the course of this feature, we’ve looked at several games that were either of the roguelike genre or were variations on it. Many of the features of the genre have proven popular on iOS, and it’s easy to see why. Randomized elements make for fun replays, and permadeaths aren’t so bad when you’ve only got a short span of time to fill. Many roguelike-derived games on iOS add in a metagame element so that all of the deaths are building towards some sort of goal, but just as many are content to leave one of the central elements of the roguelike genre alone. Each playthrough is its own adventure, its own story, with its own ending. Obtaining the victory condition, if there is one, is something that can only be won by strategy and skill, not simply by grinding.

The unique qualities of the interface of iOS hardware and the general behaviors of its audiences have pushed this type of game towards offering fewer player options and creating shorter play sessions on average. Some genuinely great games have come out of this trend, such as Hoplite ($2.99) and Imbroglio ($3.99). These games maintain a great deal of strategic depth while streamlining things greatly to suit the needs of the platform. But you know, sometimes you just want to have the freedom to dip your sword in whatever fountain you find before chucking a mystery potion at a kobold’s head to see what it does, and there honestly aren’t a lot of truly great options for that on iOS, particularly if you don’t want to wrestle with a software keyboard or some other equally clunky interface. 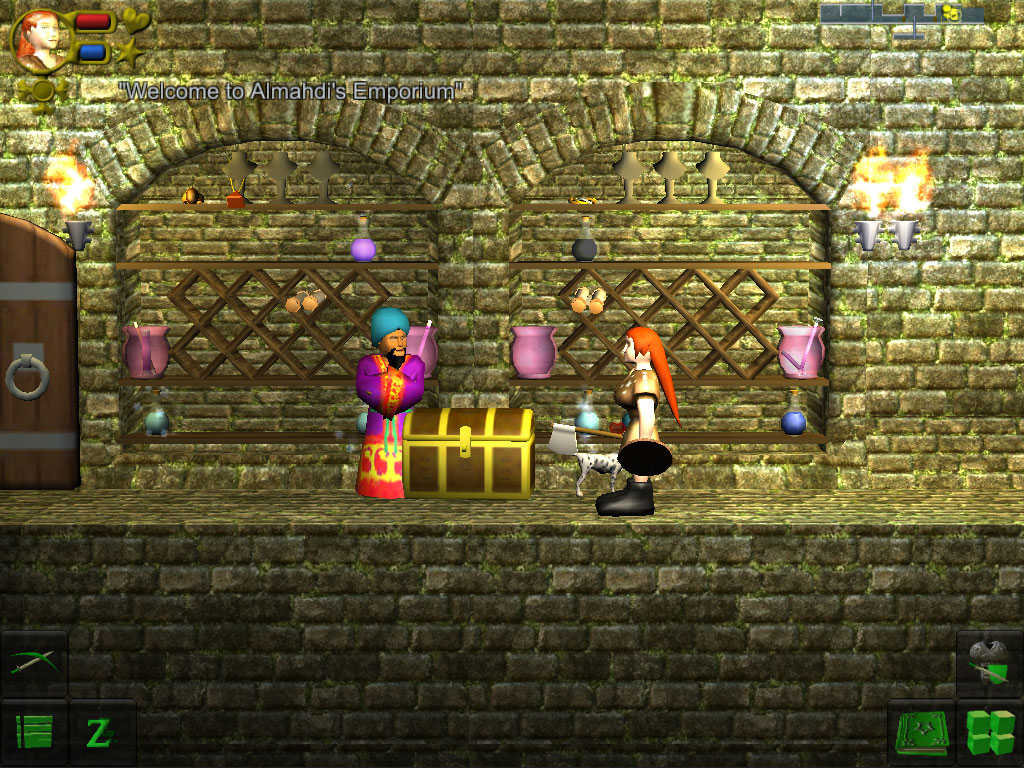 If you want that kind of experience on your iOS device, WazHack (Free) is one of the best ones. A simple glance at the screenshots might have veteran roguelike fans suspicious due to the game’s side-scrolling nature. Most pure roguelikes are played from a top-down view, after all, and while there are quite a few side-scrolling games that use roguelike elements, it’s rare to find one that holds a similar appeal to games like NetHack or Angband. That’s just what WazHack aims at, however. Created by a longtime veteran of the roguelike scene, WazHack packs in more than you would guess just by looking at it. All the random elements, resource management, and unexpected outcomes that make roguelikes as thrilling as they are can be found in this game, with the different perspective adding a fresh touch without giving up much in return.

WazHack was created by Australia-based Warwick Allison, or as he’s known to many in the roguelike community, Waz. Allison had been involved with roguelikes for a very long time, and not only as a fan. Around the turn of the millennium, he started making contributions to the popular NetHack, and joined the official development team prior to the release of version 3.4.0 in early 2002. He had been making games well before that, though, with his earliest title on record being a 1988 shoot-em-up for Atari computers called The Troglodyte. Before 2011, making games had always been a side hobby for Allison. He decided to make a full-time effort of it and quit his software engineering job. To date, his only major release has been WazHack, but the game has been in continuous development since its initial release on Windows and Mac in March of 2012. The most recent major update was just about one year ago, in October of 2015. 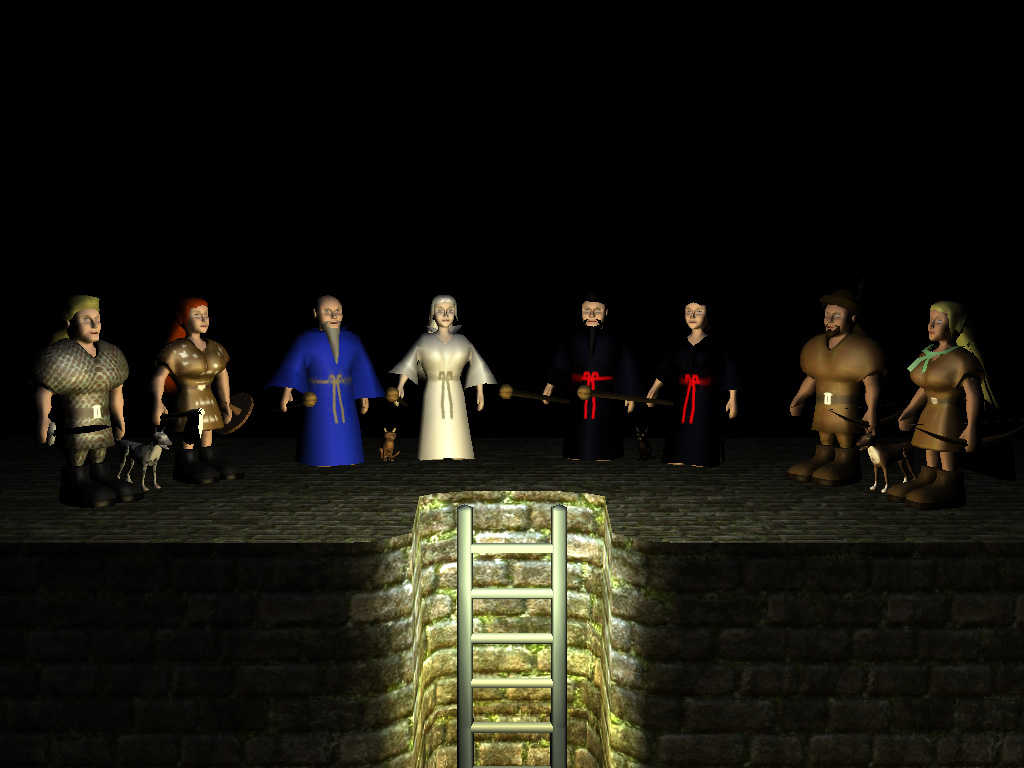 The first mobile version of WazHack appeared on Android in July of 2012, but iOS gamers wouldn’t see it until the following year. On May 6th, 2013, WazHack version 1.1 released on iOS, and that version hasn’t fallen behind the computer version for longer than a couple of months ever since. The game still runs quite well on modern devices and iOS versions, and the developer has generally taken good care of the app, so I feel quite secure in its future. The mobile version’s pay model works a little differently from the computer version, but otherwise, it’s the same game. While the PC version gives you all of the game’s content for one upfront price, the mobile version lets you try the game for free and then purchase the character classes you want a la carte.

Let’s look at the game itself, though. Like most roguelikes, WazHack challenges you to reach the bottom of a randomly-generated dungeon, retrieve the magical item, and bring it back to the surface. Each floor has at least one exit leading to the floor below it, and as you would expect, the dungeon is packed with monsters. The good news is, it’s also packed with weapons, armor, and useful items. The bad news is, a lot of those goodies are cursed in some way, so if you try to use them without identifying them, you might find yourself in a worse situation than you were already in. You’ll also need to make sure you don’t starve to death. Food is plentiful but can also be something of a roulette, to say nothing of the fact that it can spoil if you hold onto it too long. 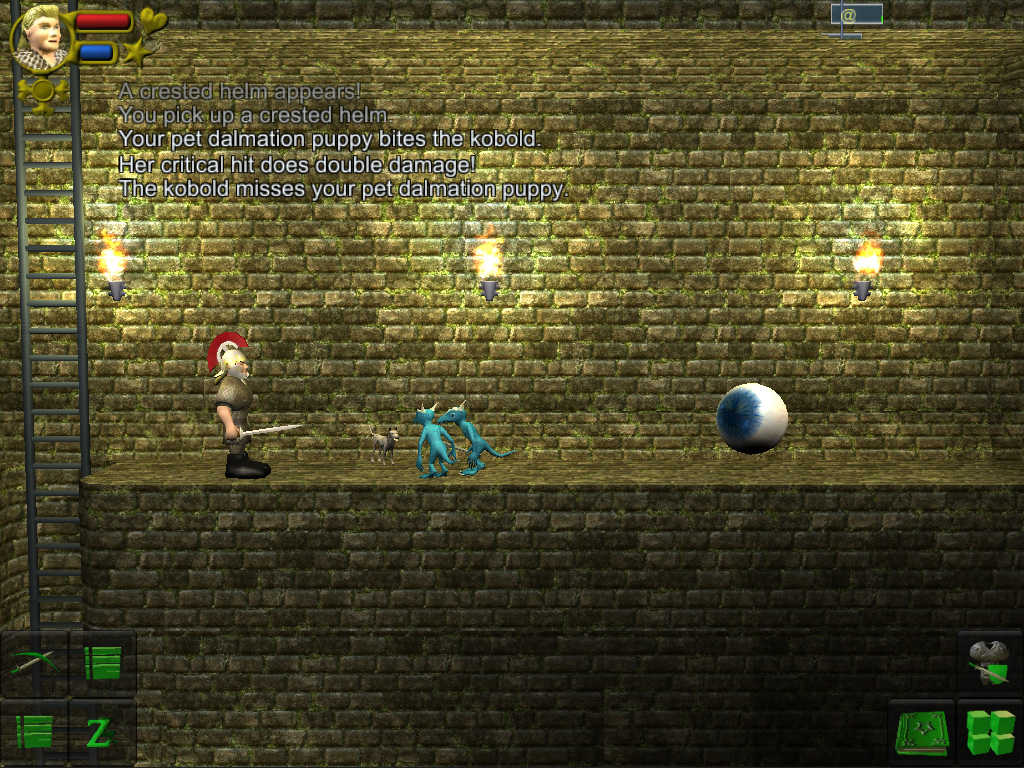 Though it may look otherwise, the game is turn-based. Nothing moves until you do, so you can take all the time in the world to make your next move. This being a roguelike, death is permanent, so it’s probably a good idea both to plan carefully and not be afraid of throwing the kitchen sink at a problem if it looks like it will be fatal otherwise. If you die, the only thing you’ll have to show for it is a fancy tombstone and whatever knowledge you accrued that can be carried over. That only gets you so far because potions, spellbooks, and so on all change properties from game to game. At the very least, you can learn about the monsters and how they behave. Most of what you need to learn is in risk management and mini-strategies for putting out certain types of fires.

I think this gets to the core of what makes pure roguelikes so endlessly enjoyable. There are always mysteries to be solved. Yes, the genre gets there by cheating a bit, but since you never know what anything does from game to game until you actually try it or identify it, that element of the unknown is ever-present. Say what you will about roguelikes, but the experience of playing one is never rote. In one game, a ring might give you a much-needed stat bonus, while in the next, a similar ring might make you float. That sounds useful, but if it’s a cursed ring, you won’t be able to take it off, and if you’re floating, you won’t be able to reach anything on the ground. Like, you know, food. How unfortunate. 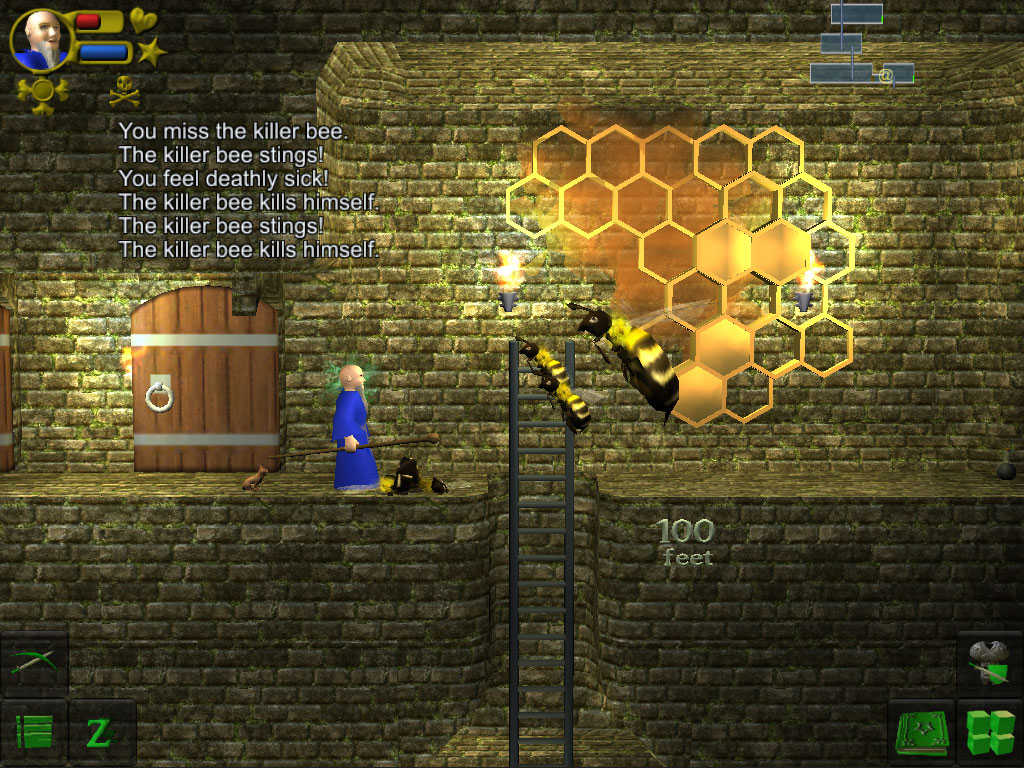 It was in one of my playthroughs where I found one such ring that I realized what WazHack brought to the roguelike table by veering away from the traditional overhead view. The angles from which enemies might approach you are more limited in a side-scrolling view, but they can certainly still gang up on you if you’re not careful. But the side-view of WazHack makes it easier for the game to express height and do some interesting things with that aspect. You’re able to aim your projectiles at whatever height you desire. The accuracy is such that you can pull off some cool-looking ricochet shots if you want to show off a little. If you have a good ranged weapon at your disposal, an uncursed means of floating takes on a whole new meaning when you can actually guide your character above the mobs and rain death down on their heads.

WazHack includes a huge variety of actions, options, and effects, so that you never quite know what you can expect in each playthrough. The interface is relatively easy to use, with a line of buttons at the bottom of the screen allowing you to perform most of the common actions you’ll need, and sub-menus handling the rest. Moving around can be a little dicey until you realize that the game isn’t really working in real-time. Once you understand that, things make a bit more sense, but you still have to be careful that you don’t try to move too far too quickly, particularly when you get deep enough in the dungeon that a few miscalculated moves can spell your doom.

I want to come back around and give some praise to this game’s payment model. You can try any of the game’s eight character classes for free down to a certain depth. If you want to progress deeper, you’ll need to buy that class. You can buy every class and end up with a reasonable price for the entire game, or just buy the ones you want and get WazHack for a steal. I don’t know how well that did for the developer, but it’s hard to imagine a fairer model for the players. If you’re looking for a roguelike with a bit of novelty to it, you might enjoy WazHack, but thanks to that free trial, you can just go ahead and play it to find out for sure.

That’s just my take on WazHack, though. What do you all think? Does this game scratch your roguelike itch? I want to know, so please share your thoughts by commenting below, posting in the Official RPG Reload Club thread, or by tweeting to me at @RPGReload. As for me, I’ll be back next week with another RPG. Thanks for reading!